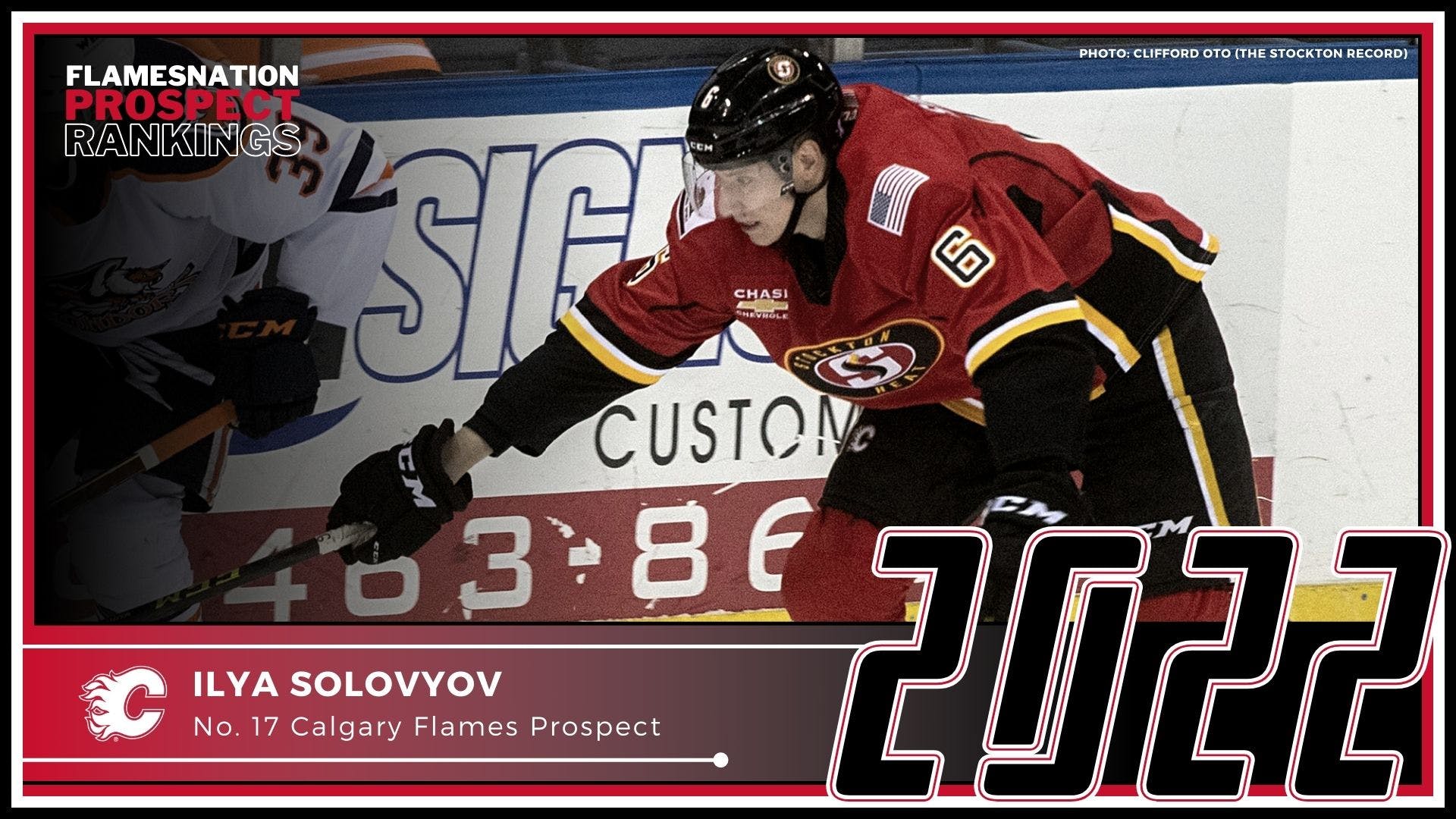 By Shane Stevenson
5 months ago
In the tail end of the 2020 draft the Calgary Flames took a shot on an overage defenceman out of Belarus – a young man by the name of Ilya Solovyov. He had been playing in the OHL for the Saginaw Spirit after being passed over his first year of draft eligibility. He brings the classic blend of size and defensive snarl that you like to have when killing penalties or battling for pucks down low.
About a year after being drafted Solovyov signed a contract with the Flames and spent the 2021-22 season with the Stockton Heat. Let’s learn a little but more about FlamesNation’s 17th ranked prospect.
Ilya Solovyov
Left shot defenceman
Born July 20, 2000 (age 22) in Mogilev, Belarus
6’3” 207lbs
Selected in seventh round (205th overall) by CGY in 2020 NHL Draft
Solovyov is primarily a player that focuses on his defensive game first, but has been known to have bursts of offence if not being tested.
As a 19 year old in the OHL he put up 40 points in 53 games. It was the highest point per game by a D-man on his team outpacing Flyers prospect Mason Millman (103rd overall, 2019 draft). Cole Perfetti led that roster with 111 points.
The next season Solovyov put up a decent showing in the KHL. At his age ice time can be limited but he got into 41 games – fifth most by a defenceman from their roster. It’s impressive considering he spent the start of the season mostly being a scratch. His size does afford him lots of opportunities but when given them Solovyov tends to impress enough to not only stick around but increase his expected role.
2021-22 Solovyov was with the Stockton Heat under direct supervision of head coach Mitch Love – who will be coming to Calgary to coach the Wranglers. Coach Love had this to say about Solovyov:

He’s an interesting player. He got off to a really slow start to the season for us. With the depth that we had at defence position last year, it was tough to find him minutes early on. Then we sent Yan Kuznetsov to the Quebec Major Junior League, and then it kind of opened up some ice time for Solo. He was really good for us. He kind of surprises you offensively by making plays coming out of his own end of the ice or through the neutral zone or just at the blueline, and get pucks to the net. And then defensively he’s a big body, he’s hard to play against, he makes it tough for opponents to get to the net. I almost describe him to a Flames fan that doesn’t get a chance to see us play much… he’s probably a poor man’s Nikita Zadorov in terms of just a little bit unassuming, but gets things done. And there’ll be the odd night where he’s really, really good. That’s probably my best comparable for him. And then just his energy and his character that he brings to our team and our dressing room. Guys love him, and looking forward to seeing him again.

Not every prospect you take has to turn into the next number one player at his position. Every roster has roles that certain skillsets tend to fit well in. Love said it best In that if Solovyov can continue to develop a third pairing role doing things like Zadorov are not out of the question.
Positive things too – like making sure nobody gets within 5 feet of the crease, making attacking players pay along the boards for trying to carry the puck in, and getting in the way of pucks so his goaltender doesn’t have to stop everything himself. In fact Solovyov and Zadorov share a fairly similar development path in terms of NHLe. Zadorov himself had more production, but the patterns of growth in percentages are close to identical. 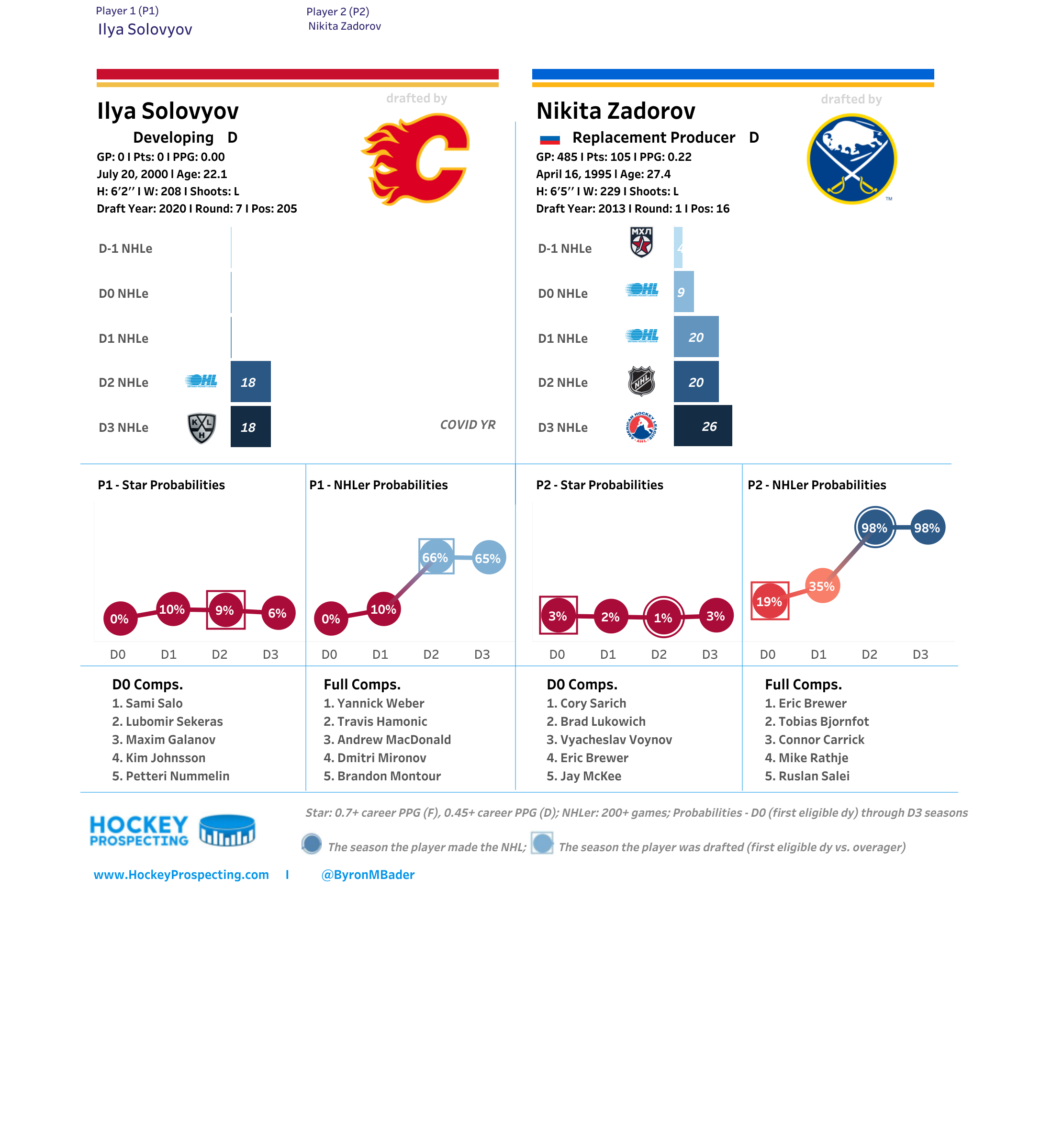 The possibility for him to make the NHL remains wide open – finding more offence and more consistently better games at the AHL level will do that for him. He’ll play a nice shutdown role on the Wranglers this upcoming season and further development is the primary goal. The Sabres rushed Zadorov into the NHL – that can happen with 1st round draft picks – Solovyov instead is getting time to develop and turn into a useful everyday player.
In the video below one of Solovyov’s best skills is highlighted – his ability to pinch in the offensive zone and use his heavy shot as a weapon. His first seasons in new leagues the last two years would come with an expected learning period. I would expect to see more of this as he sees the ice better in his second AHL season.
Players like Solo can fill much needed roles – and there is definitively something in Solovyov that’s worth keeping an eye on as time goes by.