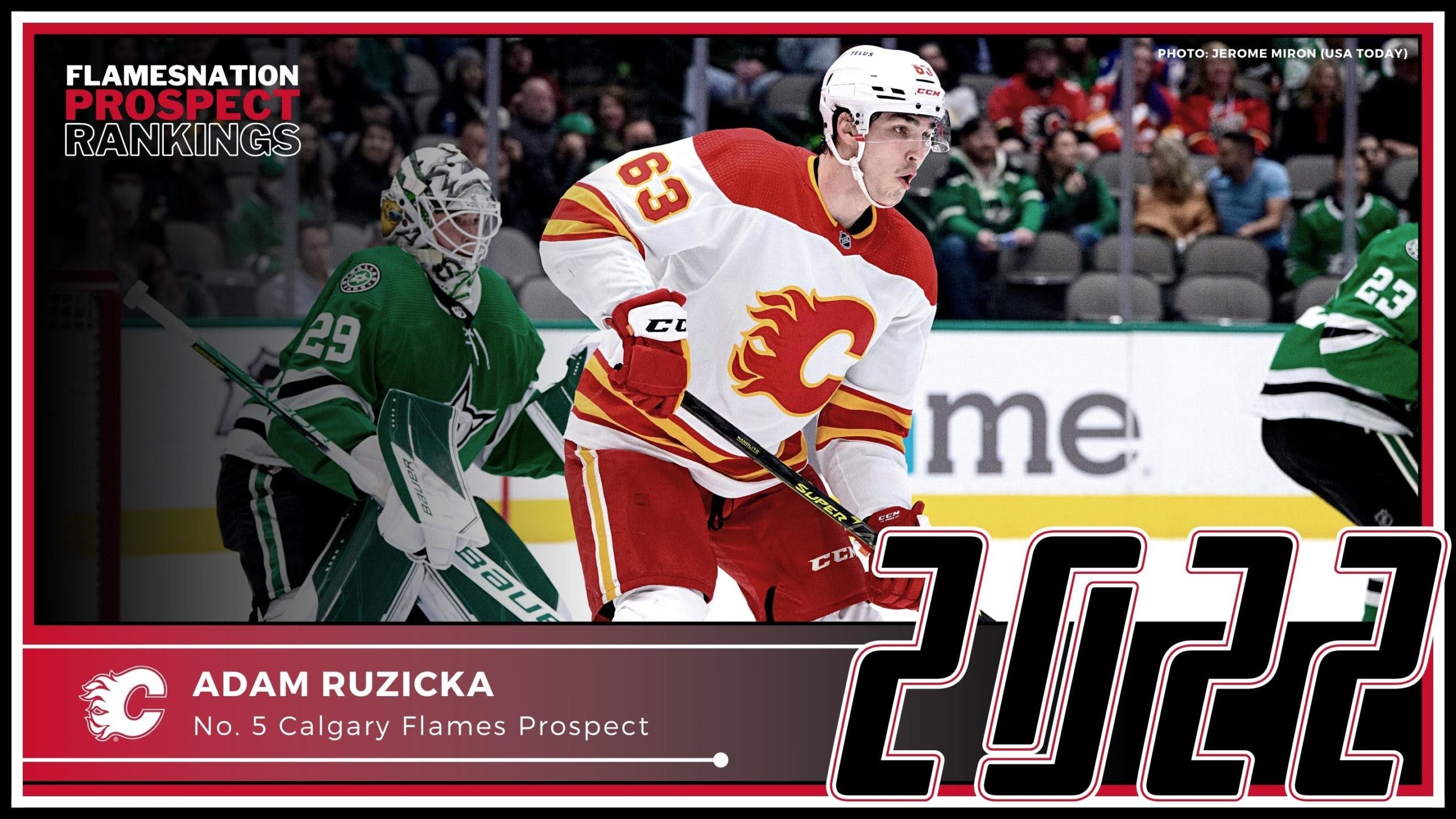 By Paige Siewert
5 months ago
Adam Ruzicka made a huge jump in 2021-22 transitioning more from an everyday AHLer to a casual NHLer. He went from his NHL debut back in 2021 to playing 28 games with the Flames the following year. For that reason, he’s moved up a spot in the FlamesNation prospect rankings this year to number five.
Adam Ruzicka
Left-handed center
Born May 11, 1999 (Age 23) in Bratislava, Slovakia
6’4”, 220 pounds
Selected in the fourth round (109th overall) by CGY in the 2017 NHL Draft
Ruzicka started the season with the Heat and very quickly gelled with his regular linemate Matthew Phillips, and new addition, Jakob Pelletier. He put up 14 points in the first 10 games of the season. He ended up playing a total of 13 games in the first half of the season before getting called up to the Flames.
His 2021-22 debut with the Flames was on December 5th. After this, he got into quite a few games between December and March. 23 games to be exact. He briefly returned to the Heat for a trio of games where he earned one goal and three assists. After those games, it was right back up to the big show.
Once he settled into the Calgary lineup some more, he played his game with the confidence he had back in the AHL. He established his role on the Flames as a fourth-line playmaker working alongside his wingers with ease. He also added his ability to find the back of the net on occasion to his contributions at the NHL level.
Ruzicka finished the season with the Flames but did not participate in the Stanley Cup playoffs. After the Flames were eliminated, he only got into two games for the Heat in the Calder Cup playoffs. It made sense to have him as an extra body for the Flames alongside Ryan Carpenter but his short-lived stint in the Calder Cup playoffs is what was a bit of a head scratcher.
It was one of those things that wasn’t talked about much by the team and very likely boiled down to an injury that kept him out of the AHL lineup down the stretch at a critical part of the year. It is unknown whether or not the suspected injury occurred in one of the two games he played in the postseason with the Heat or as a practice injury.
Here’s what Heat head coach, Mitch Love had to say about Ruzicka’s year.

Adam had an interesting hockey season. He came in with us early on after pre-season and was really strong. On a line with Jakob Pelletier and Matthew Phillips, they were as strong as any line in the American Hockey League. And then obviously he earned a promotion up with the Flames and rightfully so. And I think it took him a little bit to kinda get adapted to the National Hockey League game and what was expected of him versus the American Hockey League. And I thought he did a good job, you could really see some growth to his game. And then again, when you spend a good chunk of the season with the NHL team and then come back in the middle of a pretty important American Hockey League playoff run, it’s tough. He was good for us, he was beneficial for us down the stretch in the playoffs, and then obviously had some setbacks with some ailments late in the year that didn’t allow him to finish with us. Again, another guy you hope’s having a big off-season and will really come in and push for everyday minutes with the Flames.

Provided Ruzicka’s off-season has given him an opportunity to rehabilitate his suspected injury, Ruzicka should not skip a beat. As a young player who had quite a substantial taste of the NHL, he’s going to try to do everything in his power to keep that spot in the lineup.
Multiple Flames regulars have made this jump in the past. Most recently, Andrew Mangiapane, Oliver Kylington, and Rasmus Andersson. Adam Ruzicka could very well be on the path of being the next AHL success story and has a huge lineup shakeup from this off-season to find his new role in.
Depending on how he does in the preseason, Adam Ruzicka should be on the opening night roster for the Flames. If things are looking a little shaky, there is still the potential for him to join the Calgary Wranglers to start the season. Even so, he would still be near the top if not at the top of the list when it comes to call-ups and won’t have to travel far at all this year.
The goal for Ruzicka has got to be to capitalize on any NHL opportunities he has. It will also be in his best interest to get in more games this year if the situation calls for it. That’s at either the NHL or the AHL level. It’s tough being right on the cusp but he’s at a very pivotal place in his career.
It’ll be a big month for Ruzicka in September and his actions will determine his starting point for the 2022-23 season.