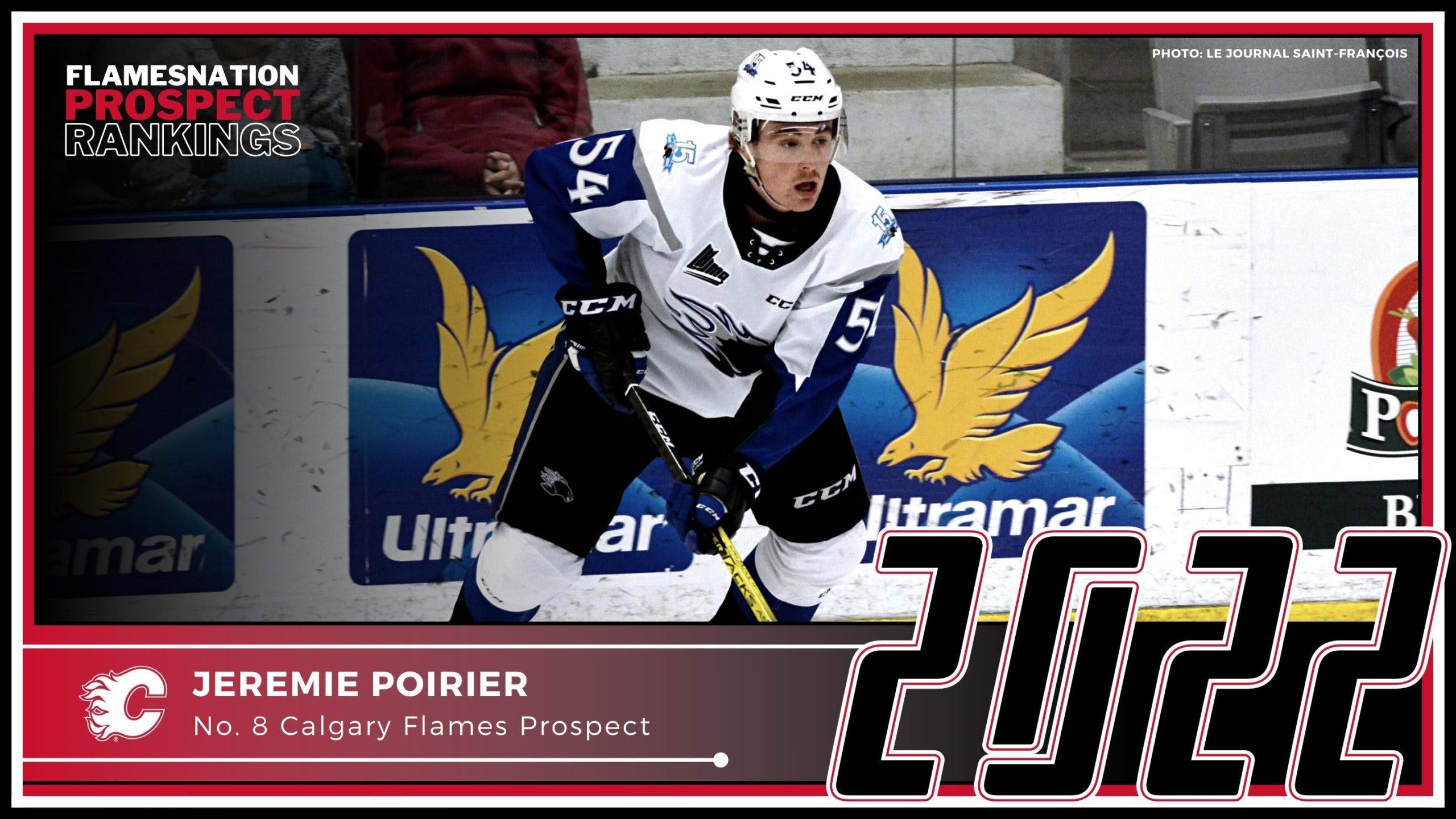 By Ryan Pike
3 months ago
When it comes down to it, friends, hockey is about out-scoring the other team. The Calgary Flames have a long history of defencemen who can create offence from the back end. Within their current farm system, their most potent point-creating blueliner is Jeremie Poirier.
Poirier is ranked 8th on this year’s prospect countdown.
Jeremie Poirier
Left-handed defender
Born Jun. 2, 2002 (age 20) in Valleyfield, Quebec
6’1”, 190 pounds
Selected in the third round (72nd overall) by CGY in the 2020 NHL Draft
A product of the Montreal area, Poirier came up through minor hockey all around the local suburbs. He was selected 8th overall in the 2018 QMJHL Entry Draft by the Saint John Sea Dogs after a productive tenure in previous levels of minor hockey.
Poirier spent four seasons in the QMJHL with the Sea Dogs: two prior to being drafted and two afterwards.
As a rookie, Poirier had 21 points (second among Saint John blueliners). The following season he made a big step forward, amassing 53 points and leading Sea Dogs defenders in that category. His offensive progress drew a good deal of attention from NHL scouts, eventually being selected by the Flames in the third round of the 2020 NHL Draft. The line on him from scouts was that he was a superb offensive player with under-developed defensive instincts who could play on either the left or right side, making him a versatile offensive option for his club.
Over the past two seasons, Poirier has remained Saint John’s top-scoring blueliner with 37 points in the pandemic-shortened 2020-21 season and 57 points in 2021-22. He had three points in the Memorial Cup, helping the Sea Dogs capture junior hockey’s top prize.
HockeyProspect.com director of scouting Jerome Berube, well-versed in the QMJHL, provided his assessment of Poirier’s game at this point:

Poirier had a good year offensively, I was expecting a bit more, to be honest. Pretty similar numbers that he had 2 years ago but his defensive game was definitely better. I still think his defensive game will be an issue at the next level but at least there was some improvement. Also, his team was not a gong show this year compared to his first three years in the league which surely helped.
Poirier has elite puck skills sometime to his detriment has he can try to do too much on his own and turns the puck over. Great shooting skills from the point, great release and ability to get pucks on net.
Skating (backward) has always been an issue with him, he gets beat often wide and also his off-the-puck anticipation to defend also needs to get quicker as he can be slow to react defensively.

Poirier is now 20 and while he would be eligible to return to the QMJHL as an overage player, his entry-level deal will begin running in 2022-23 and he seems destined to move onto new challenges in pro hockey.

Poirier seems destined for the Calgary Wranglers in 2022-23. It’ll be interesting to see what his role ends up being. Simply put, the Wranglers will have a ton of defensive bodies around and while Poirier will be given a ton of chances to play a big role due to his status as a high-end prospect, his role isn’t immediately obvious.
Poirier is a player with NHL upside offensively, but his defensive game might hold him back. But the Flames had the same situation on their hands when Oliver Kylington was drafted in 2015, so potentially his successful development into an NHL player provides a road map for Poirier.
But the big question is how long will it take for him to round his game out? And who will be paired with him with the Wranglers to help show him the ropes? Training camp will provide clues as to how far away Poirier is from the NHL, and how close his is to getting there.