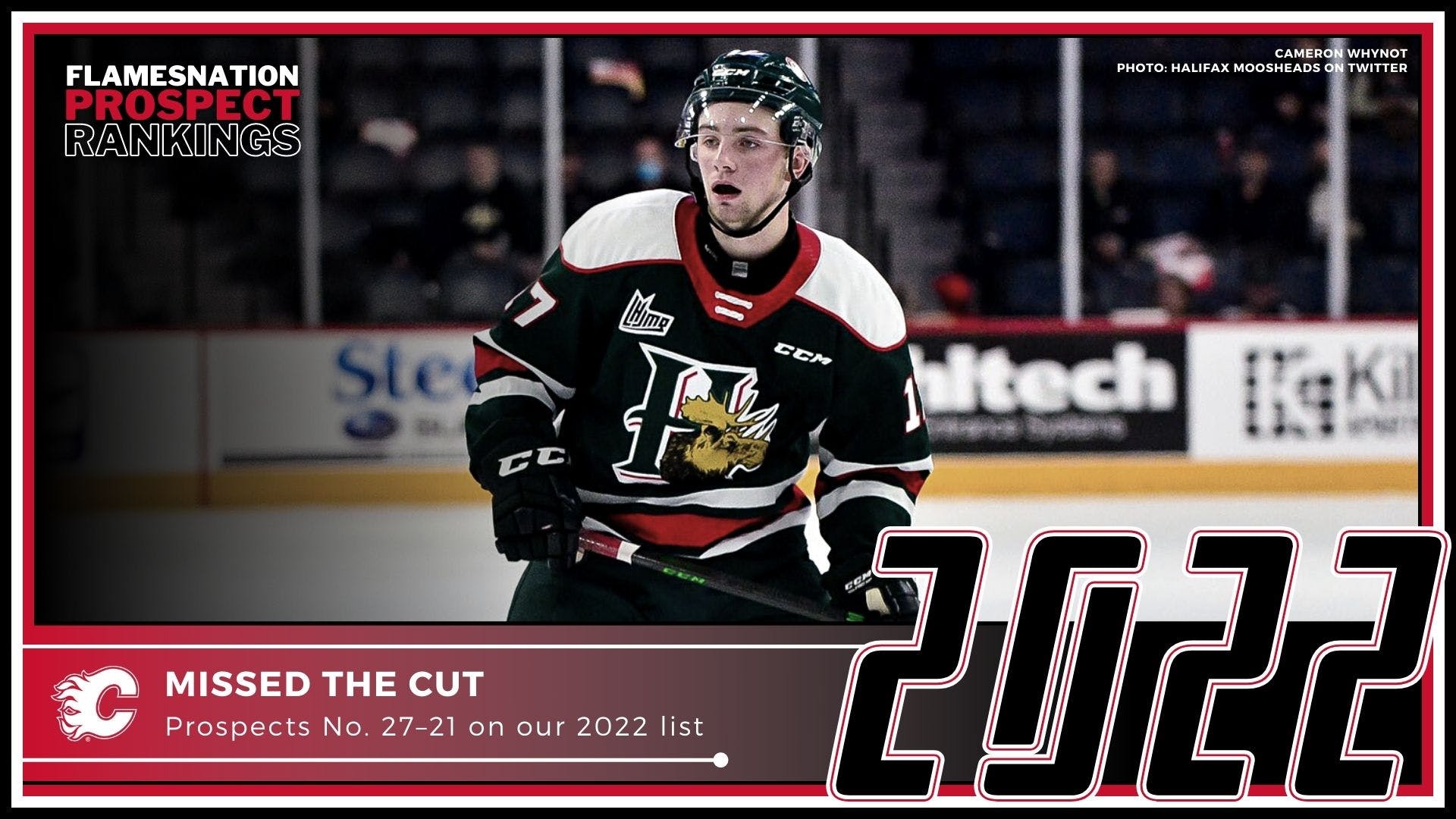 By Ryan Pike
5 months ago
Every year, the FlamesNation writing team compiles our Top 20 lists of Calgary Flames prospects. We aggregate our individual lists into our overall Top 20 ranking. But a few prospects get votes on a few ballots, but fail to crack the top 20.
This year, seven prospects made one or more top 20 lists from our individual writers but missed the cut for the overall Top 20.

A fifth-rounder in 2022, Bell is a left shot winger who plays for the Western Hockey League’s Tri-City Americans. Listed at 6’4″ and 200 pounds, Bell is a really big, raw young player. Flames head scout Tod Button noted after his selection that the Flames liked him because he hasn’t been exposed to high-end training, so they see a lot of untapped potential in him. He had 49 points in 64 games last season for Tri-City.

A third-rounder in 2020, Boltmann is a right shot blueliner who plays for the NCAA’s Notre Dame Fighting Irish. Projected as more of a meat-and-potatoes shutdown defender, Boltmann hasn’t really blown anybody away in college with his scoring prowess, but he’s been a reliable defensive presence on a pretty good college team.

A free agent signing after not receiving a qualifying offer from Colorado, Gilbert is a left shot blueliner who’s headed into his fifth pro season. A product of Notre Dame, Gilbert has been a really reliable two-way AHL blueliner but hasn’t managed to get a foothold at the NHL level despite stops in the Chicago and Colorado organizations.

A third-rounder in 2021, Huckins is a lanky left shot centre with the QMJHL’s Sherbrooke Phoenix. He was drafted out of the Acadie-Bathurst Titan, but he had an uneven post-draft season that included him being sent home from the club briefly. He returned for the playoffs and performed fairly well, but was traded to the Phoenix once the trade window opened. Perhaps he can find his scoring touch more consistently with a fresh start in Sherbrooke.

A fifth-rounder in 2021, Jordan is a smooth-skating left shot defender with the WHL’s Moose Jaw Warriors. Scouts loved his mobility and potential in his draft year, but he struggled with injuries over the past season – he really didn’t look like himself until the last 6-8 weeks of the season. He has both the benefit and the challenge of playing on a really good team, so he plays with good players but also has to deal with a ton of competition for spots.

A free agent signing out of Czechia, Klapka is a right shot winger who used to play with Billi Tygri Liberec of the Czech Extraliga. He’s gigantic, listed at 6’8″ and 236 pounds, and performed pretty well as a young player in Czech pro hockey. He’s a bit of an unknown quantity, though, and nobody knows how he’ll translate to North America.

A third-rounder in 2021, Whynot is a left shot defender who plays the QMJHL’s Halifax Mooseheads. Whynot has potential as a two-way defender, but he struggled to stay healthy over the past season – he had horrendous luck – and so he wasn’t really able to progress much over the past year.