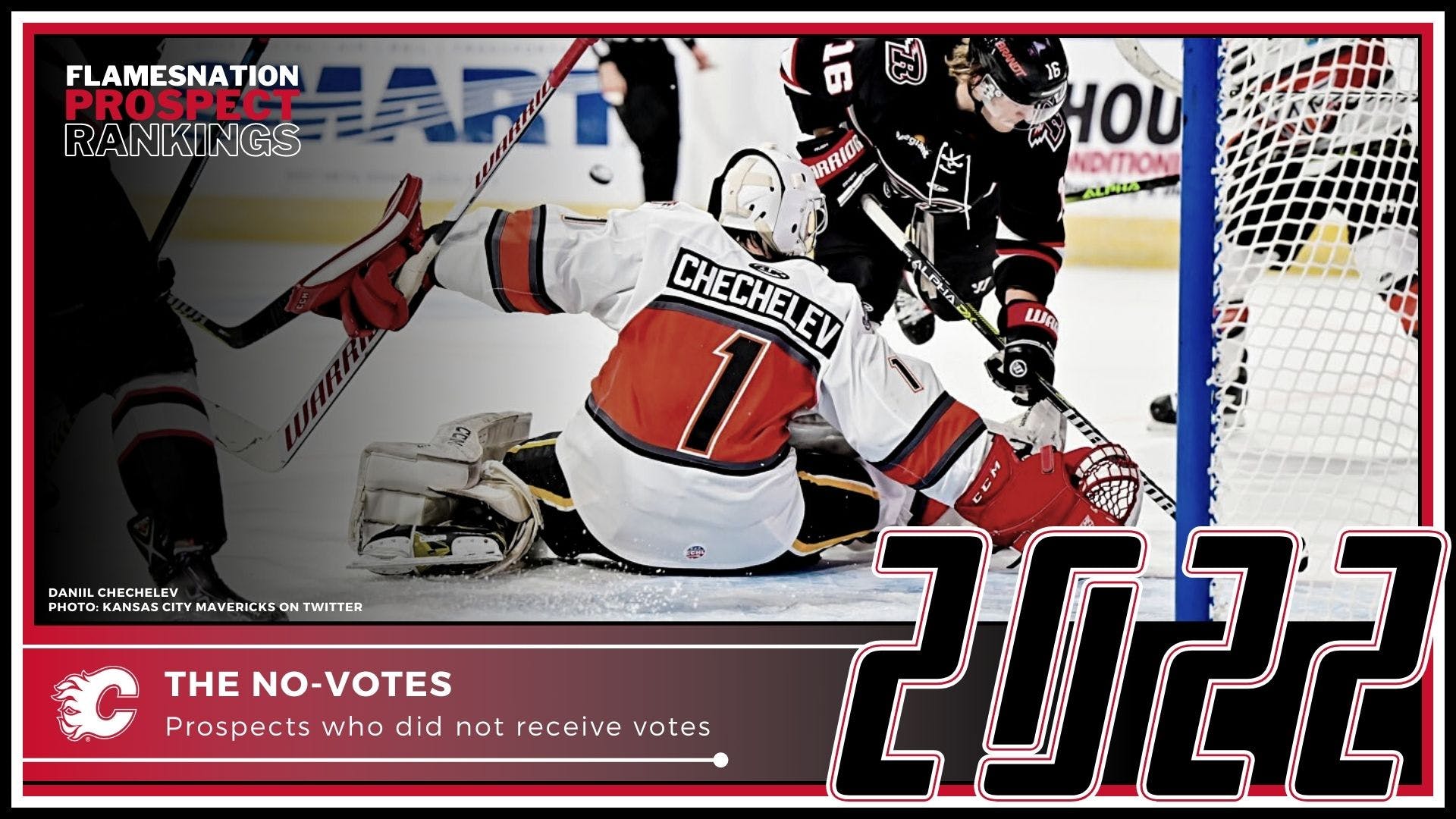 By Ryan Pike
3 months ago
Welcome to the 2022 edition of FlamesNation’s annual prospect rankings!
Earlier this month, eight members of our content team crafted lists ranking the Calgary Flames’ top 20 prospects. Our final list aggregates the votes submitted by the following writers:
Over the next three weeks, we’ll count down from No. 20 until we reveal the name atop our collective list. In the end, each of our writers will describe their respective ranking methodologies; in the same concluding piece, all of our individual lists will be published.
Every Calder Trophy-eligible player on the Flames’ depth chart, RFA list, or reserve list was eligible to be ranked. 36 players fit that description. The exception was Daniel Vladar. Given that Vladar dressed for 81 games last season and played in 23 games. He’s technically eligible for the Calder Trophy in 2022-23, but we internally decided to exclude him because he’s literally a full-time NHL player now.
Before we get to the players we ranked in the top 20, we need to address the 16 players that didn’t make that listing. Up first, the players who didn’t receive any votes during our balloting process.

Players not receiving a vote

Daniil Chechelev
A fourth-round selection in 2020, Chechelev bounced around a bit in his Draft+1 season and ended up landing in North America on the AHL with the Stockton Heat in 2021-22. He ended up playing primarily in Kansas City of the ECHL, going 12-12-5 with a 3.64 goals against average and .894 save percentage in a league where defensive play is more of a suggestion than something that actually happens. He made his AHL debut late in the season, losing in overtime. He’s a project and is likely headed back to the ECHL this season (he’s signed on another AHL deal).
Lucas Ciona
A sixth-round selection in 2021, Ciona is a rough-and-tumble winger for the Seattle Thunderbirds of the WHL. What probably kept him off everyone’s lists is his status as a complimentary piece for the Thunderbirds rather than an offensive driver. He had a strong playoffs, but in the regular season he was somebody whose crashing and banging work enabled his teammates’ success rather than somebody who had a ton of success himself.
Lucas Feuk
Selected in the fourth round in 2019, Feuk has had three uneven post-draft seasons. He hasn’t found a niche as a pro, and has ended up splitting each of his past three seasons across multiple organizations. That’s weird, and not terribly conducive to his development. Feuk’s 2022-23 team has yet to be revealed.
Demetrios Koumontzis
A 2018 fourth-round pick, Koumontzis is a player that (so far) has not yet delivered on his potential. He was a well-regarded high school player destined for Arizona State in his draft year. He had a strong freshman season offensively, but seemingly plateaued at that point, and while he’s since become a valuable veteran for that program, he’s merely a strong depth player rather than a key scorer. He’s headed back to ASU for a red-shirt senior year.
Carl-John Lerby
A free agent signing a few years back, Lerby is back in Europe and the Flames still hold his North American rights. Lerby was a promising Swedish player that never quite clicked in the AHL, and he opted to head back home rather than spend another (potentially challenging) season in Stockton.
Cade Littler
A 2022 seventh-round pick, Littler is headed back to the BCHL for another season before he heads to college. He’s very raw and a long-term project, but he’s a tall right shot centre, so the hope is he can continue to develop over time.
Mitchell Mattson
A 2016 fifth-round pick, Mattson spent two post-draft seasons in the USHL before transitioning to the NCAA at 20 and being a complimentary piece at Michigan State. The Flames had Mattson’s pro rights when we did our ranking, but those rights have since lapsed.
Josh Nodler
A 2019 fifth-round pick, Nodler spent three seasons at Michigan State and so far hasn’t progressed past the initial promise he showed in his freshman year – he was in the World Junior mix for a bit. He transferred to U Mass for his senior year.
Eetu Tuulola
A 2016 sixth-rounder, Tuulola played out his entry-level deal with the Heat (establishing himself as a reliable secondary AHL scorer) and has signed in Finland for the coming season. The Flames still hold his North American rights.