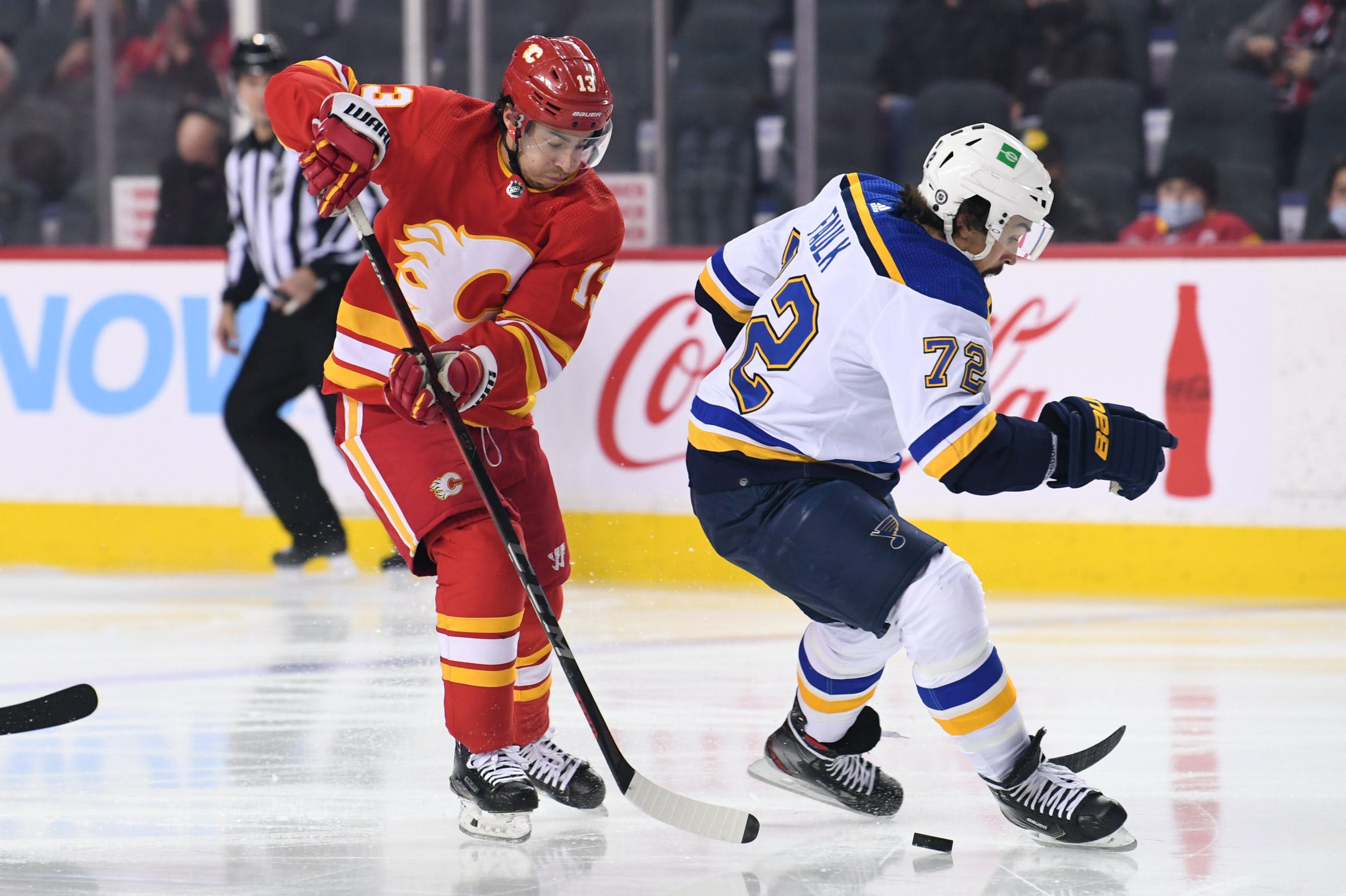 By Shane Stevenson
1 year ago
If you came to this review wondering if I’ve got any criticisms… I do not. That was a masterclass at taking care of a tired team properly. Out of the gates Calgary was dictating play, and then the Blues got the Bozak goal. The thoughts of “here we go again” barely were able to take place before Nikita Zadorov sniped a rocket of a wrist shot to tie the game. Calgary never relinquished the momentum after that, never even coming close to not being in complete control.
CF% – 79.33%, SCF% – 80.91%, HDCF% – 82.26%, xGF% – 83.4%
It’s a Team Game – Coming into this one the Blues were 8-2-2 against Pacific division teams, and they were on the second half of a back-to-back having beaten Vancouver 3-1 the night prior. That still is no excuse for the entire roster to come out and lay as bad a goose egg as they did. There should not be a happy person in that Blues organization because this one was embarrassing for them. Calgary ultimately being able to build off the strong 5v5 play from the loss against Edmonton, they’ve looked like the start of the season Flames for the last 2 games – a very good sign indeed.
Corsi King – In the most dominant Flames game of the year the two guys at the top are who you would expect (he says knowing that it’s not what they expect). Erik Gudbranson (88.41 CF%) and Adam Ružička (86.16%) led the way as 8 players finished with ratios over 80%. Nikita Zadorov (83.60%) again, beautiful goal. Maybe the Blues tendy had to deal with a partial screen, but he still put that puck where it needed to go.
Corsi Clown – The lowest guy was above 60%, yes SIXTY percent. No clowns today Roger, just a team full of kings.
Taken By Chance – Not a single Flame player was out chanced in any capacity tonight. The only guy to finish below 60% anywhere was the fourth line RW Brett Ritchie (69.41 SCF% // 51.69 HDCF%). Every player did find themselves in a position where a high danger chance happened while they were out there at 5v5, except Chris Tanev (82.40% // 100%). Also, when will the Blasty Bros. stop being so unlucky? Milan Lucic (87.89% // 84.19%) and Dillon Dubé (87.80% // 86.29%) are due for a whole horde of bounces soon.
xGF% – Blake Coleman (91.05 xGF%) and Mikael Backlund (91.05%) had the highest quality ratios of any players, and they were the line that got scored on of course. After that goal the Blues got nothing when the shutdown duo was out there. Linemate Andrew Mangiapane (88.76%) aggressively put the puck off the post in the third period. Come to think of it he’s due for a bounce too with the way he’s been playing. Right now though, it really seems the pucks bouncing Sean Monahan’s (80.13%) way as he scored his third goal in 3 games.
Game Flow – 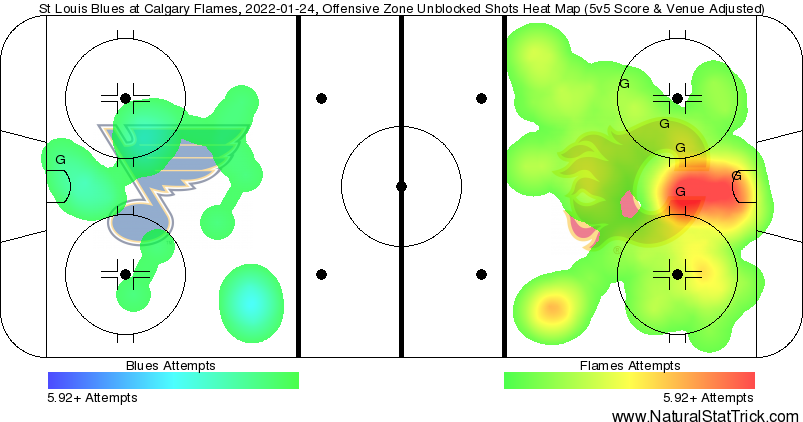 Caption: Simply a Magnificent piece of high-end artwork.
In The Crease – If Jacob Markstrom were asleep to start the third period, I wouldn’t have blamed him, but he got tested on some good opportunities and showed that he came to play too. Full team effort from the goal crease out. Only 0.89 expected goals against, a 0.933 5v5 SV% and one high danger goal against for number 25 in red. Play that beat him was a really nice passing play too, hard to fault him when the forwards break out before the puck leaves the zone – don’t worry it never happened again a single time the rest of the game after that.
Today’s Specials – TWO power play goals, in ONE game? Are we spoiled or what? Johnny Gaudreau was playing like the true All-Star (Superstar) he is, and his linemates were all feeling it too. The Blues PK couldn’t keep up with the passing, and the personnel themselves are being a lot smarter in their pass selection – while incorporating more movement to open up passing lanes.
Player Spotlight – Matthew Tkachuk/Johnny Gaudreau – 1 goal, 8 assist between the two of them. After 2 periods Matthew Tkachuk had a legitimate shot at not just the Flames all-time record for most assists in one game, but the entire leagues record. It never happened, but the performances were still spectacular. The chemistry between these two is at a level it never, ever reached with the 13-23 pairing. Throw in a complete defensive centerman with a fantastic wrist shot and good positional awareness and you’ve got one of the top 5 lines in the whole league.
Tkachuk will most likely sign his RFA deal in the off-season, but I am curious to see if Johnny gets signed in-season. I still think he stays a Flame myself but being that the trade deadline is 54 days away it is becoming increasingly more… intriguing.
Flashalytic’s 3 Stars –
1) Matthew Tkachuk
2) Johnny Gaudreau
3) Chris Tanev
HM: Literally everyone (complete team effort)
The Flames rollercoaster is underway! Back-to-back games coming up on Wednesday in Columbus and Thursday against these very same Blues in St. Louis.
(Stats compiled from Naturalstattrick.com // Game Score from Hockeystatcards.com)
You know it really is cool that after one of the most entertaining weekends of NFL Football in history the Flames put up a touchdown – 6 goals are all linked above this in the article, and heres the extra point: