By Shane Stevenson
26 days ago
The only word to describe the outcome when you play the last place team and lose is “disappointing.” Calgary was able to control possession by a fair advantage and yet the high danger chances were only in their favour by one. Sloppy play and miscommunications kept happening all evening.  Calgary themselves did show an increased urgency to get off scoring chances from around the crease – it was enough to scrape together a point.
CF% – 59.43%, SCF% – 58.99%, HDCF% – 53.82%, xGF% – 51.42%
It’s a Team Game – Calgary’s defensive coverage was their biggest weakness against Chicago. They certainly were not playing in a manner that could be described as efficient, as they gave up chances in their crease in bunches. The process looks like it’s coming along but tonight it hindered the players more than aided them. People can make excuses about the turn-around, the travel days, and the lack of morning skate but these professionals should have still been ready to go when the opening puck was dropped, and they were visibly slow because of it.
Corsi King – Mikael Backlund (78.43%) and his line with a major advantage in overall attempts. Them getting a huge advantage in everything and coming up with no goals is a huge factor the Flames only secured one point and not two. Coach said it’s hard to score 4 goals and win a hockey game in the post-game press conference. I understand the message there – I really do – but scoring is up in the NHL. The old cliché sayings don’t hold their weight as the game evolves back to a more offensive one. Scoring 4 goals in a game is more of a new target – it’s okay to move the uprights if the rules of the game change, but you need to be able to recognize and adjust.
Corsi Clown – Elias Lindholm (42.87%) and linemate Toffoli (43.33%) were the only two to lose the attempts battle by a decent margin. Just ahead of them was Zohorna (46.91%) and then Trevor Lewis (49.94%). The team performing well here has become the normal, but the xG and CF% boost is being driven by a heavy amount of non-lethal shot volume. Teams that emphasize more dangerous chances are the ones that lift Stanley Cups – Calgary can’t afford to lose these battles to basement dwelling teams.
Under Pressure – 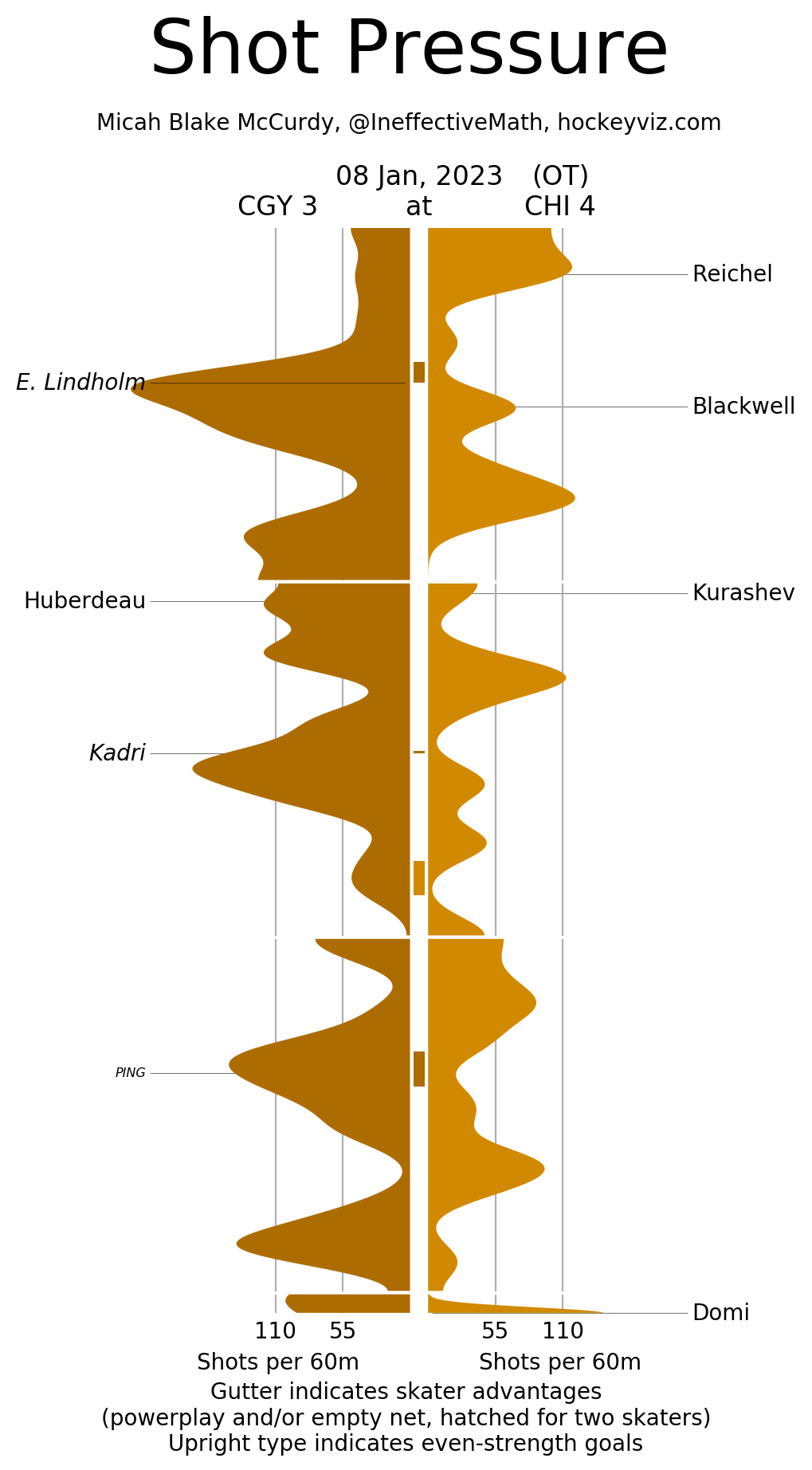 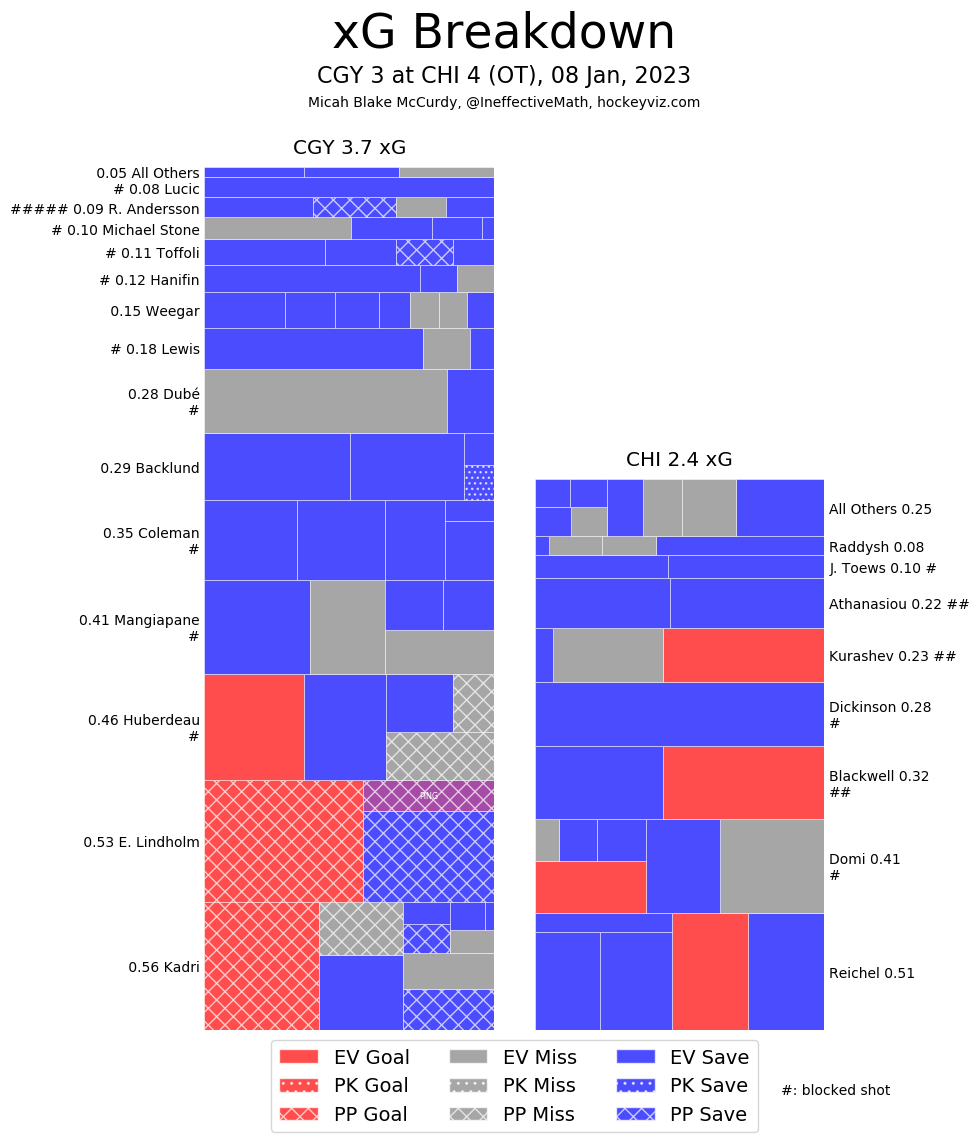 xGF% – 8 players finished below 30% which for one last time I’ll mention is absolutely unacceptable when considering the opponent that was being played. It’s not like a final dagger in their chances or anything but it’s a situation that can be pointed to if they fall just short. The players in Chicago are proud – and certainly are not playing to lose – you still have to bring a decent effort to beat them. The results of the xG tell me the decent effort wasn’t there from a third of the roster. If you’re going to sacrifice offensive chances for a better defensive game then the results need to show a better defensive outcome.
Game Flow – 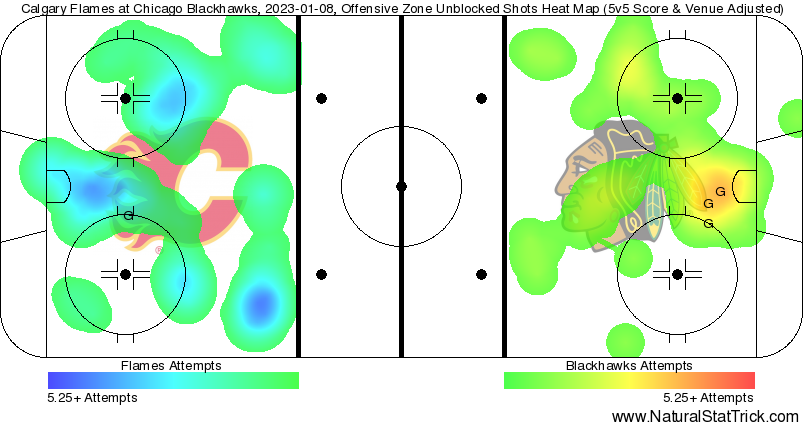 In The Crease – I’m certainly not going to blame Markstrom who let in all 3 goals against – because all three goals were high danger ones from within a stick length of the crease. Vladar was excellent in relief keeping his run of strong play alive. Without him Calgary does not collect the point they scraped together for playing to not lose in overtime. Vladar stopped all 1.36 expected goals against.
Today’s Specials – The Flames power play only seems to come alive against the bottom dwelling teams. That’s good because they absolutely needed it against the Blackhawks and without it they easily lose the game. They scored early on both successful power plays – that’s when their PP unit shines. If the puck gets cleared, they struggle mightily on the re-entry. Keep that out of the game and the % of goals on the PP will increase.
Player Spotlight – Nazem Kadri – The Flames all-star has got a hot stick since the news broke scoring in both games. He’s found some chemistry with Huberdeau and Lucic and the three have put two strong performances together in back-to-back fashion. Lucic’s game is helping the line establish extended possession – something Kadri has thrived at doing his whole career. We can complain and moan about how that line won’t last but for now they’ve had 2 strong games in a row and have earned the chance for another game together. Pelletier waiting in the wings makes me think he’ll be rewarded with a game or two on this road trip, but it may not be in Lucic’s spot like it’s being presumed. Dubé was a weaker link for the Flames than him Sunday evening.
The Goals –
Flashalytic’s 3 Stars –
1) Jonathan Huberdeau
2) Mikael Backlund
3) Dan Vladar
(Stats compiled from Naturalstattrick.com // Game Score from Hockeystatcards.com // xG and Under Pressure charts from HockeyViz.com // Game Flow and Shot Heatmap from NaturalStatTrick.com)
Editorials
Recent articles from Shane Stevenson