Beyond the Boxscore: Calgary Flames clutch out scrappy victory in Hollywood 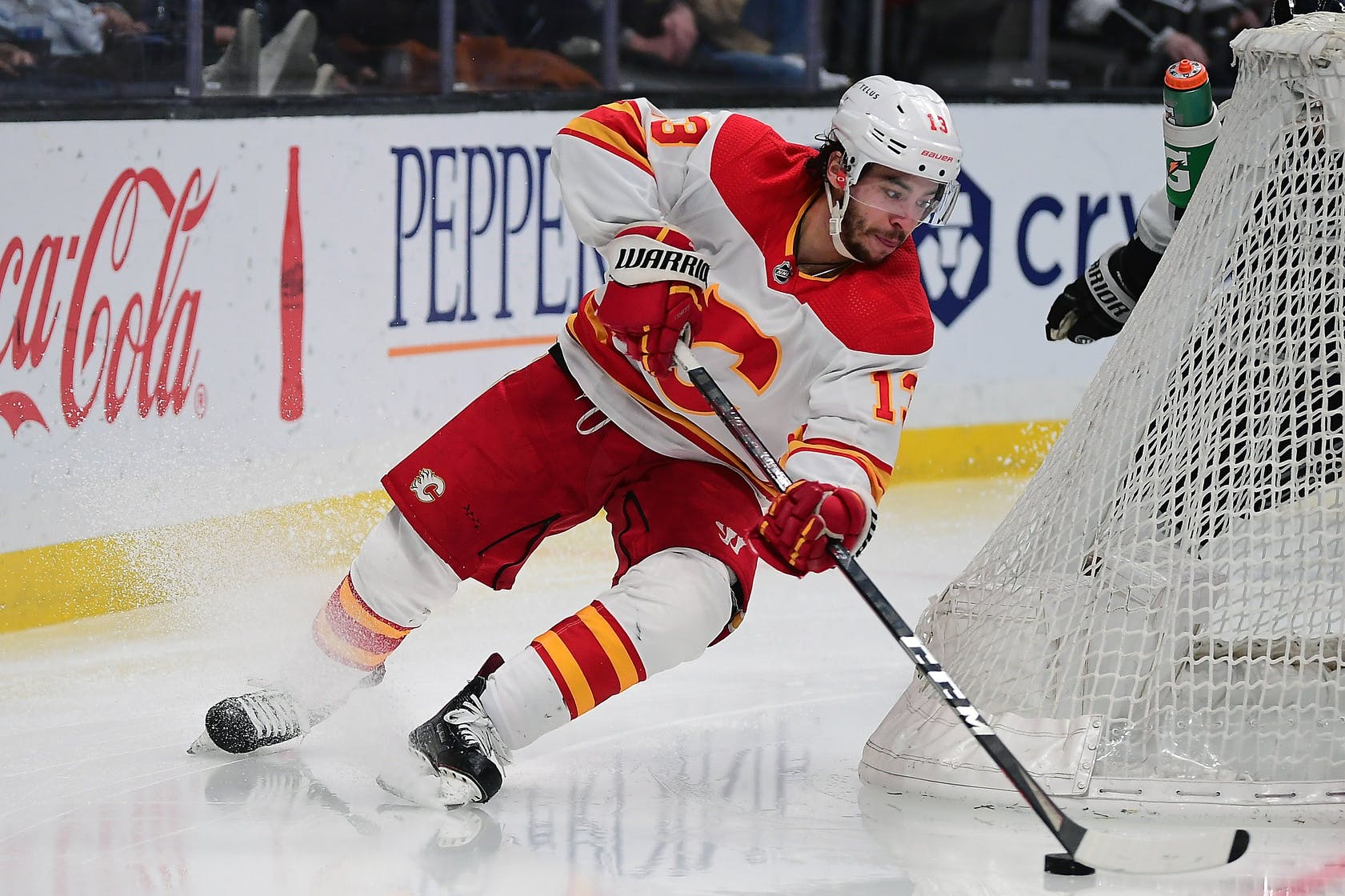 By Shane Stevenson
7 months ago
Back on the road and back in the win column, the Calgary Flames took a victory in their bruising match against the Los Angeles Kings on Monday evening. Scoring started 10 seconds in when Johnny Gaudreau banked one in off Cal Peterson. Penalty killers may have let one by on a 5v3 power play, but at 5v4 Calgary skaters didn’t surrender any goals. Chris Tanev and Erik Gudbranson laid everything out blocking an abundance of shots to keep the lead in Calgary’s favour. A gritty hard-working win to get Calgary off a three game losing skid.
CF% – 62%, SCF% – 61.46%, HDCF% – 45.8%, xGF% – 57.58%
It’s a Team Game – To start the affair It was pretty much a defensive deadlock, Johnny got a bounce and Kempe found a hole in coverage but outside of that it was fairly tight checking. When Calgary had Johnny Gaudreau go off for his two points in 1:05 it flipped a switch for the rest of the team and momentum swung in Calgary’s favour after that. Flames had a strong third period outside of the penalties but earn the two points in the divisional matchup.
Corsi King – Eventually Andrew Mangiapane (74.05 CF%) will find the back of the net again. He’s constantly on the positive side of all the offensive creation categories every game, he’s due for another bountiful outburst. Tyler Toffoli (72.86%) falls in that same category as Mange. Pretty solid effort on overall attempts from every Flames D-man at 5v5 as well. Strong performances from the back end always lead to great nights from the Flames top line as well.
Corsi Clown – The lowest guy in terms of chances/ratio was Blake Coleman (46.80%) who was also instrumental at being the piece in breaking up almost a handful of extended Kings zone possessions with his skating and defensive hockey sense. If he had only been able to just stay on his feet at one point he could have had a shorthanded breakaway as well.
Taken By Chance – Michael Stone (67.79 SCF% // 70.90 HDCF%) and partner Chris Tanev (70.11% // 61.90%) were involved in the most number of danger chances of any player 5v5. Matthew Tkachuk (62.29% // 62.88%) and company were 3 for 3 on their 5v5 high danger chances in this one, well the ones that hit the net anyways. They did have a few chances that missed the net or were deflected, but Cal Petersen did not do a very good job of stopping the Flames top scorers.
xGF% – Mikael Backlund (67.90 xGF%) is another player that has tended to be on the positive side of shot shares/quality attempts nightly yet hasn’t been able to produce at high levels. Johnny Gaudreau (55.06%), Elias Lindholm (49.90%) and Matthew Tkachuk (66.95%) have been able to carry the team on plenty of nights this regular season, but when the games start getting even tighter checking the depth is going to need to find a way to score some goals.
Game Flow –

After Johnny went supermode the whole club upped the pace of their attack. Board battles were frequent and relentless – Calgary came out with the puck a large majority of the time too. The players had said they were ready for a road trip lets hope this rejuvenation continues for everybody.
Game Score – Johnny Gaudreau (3.74 game // 1.86 average) and Matthew Tkachuk (2.71 // 1.76) are both top 5 in the entire league in average game score. They are consistently producing points and quality play every single game. Michael Stone (2.38 // 0.75) and Chris Tanev (2.24 // 0.95) also finish over that 2.00 bar.
Shot Heatmap – 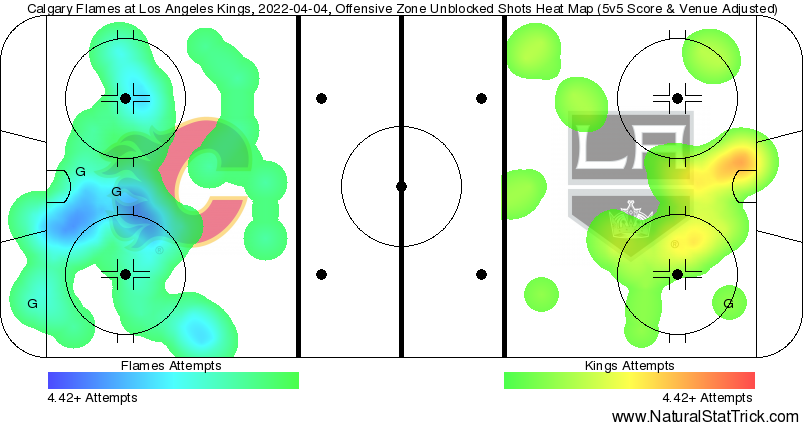 It was indeed Calgary’s game to win – they hardly let it slip anywhere near away. The Kings were not quite the same disciplined defensive team we saw two games ago – which was not a good thing for them. They relaxed their coverage on the Flames top guys and that has ended up always hurting any team that does that. Best line in hockey this year – the amount of time they;ve done this certainly makes it for a fun argument in comparison to Bunting-Matthews-Marner or Marchand-Bergeron-Pastrnak.
In The Crease – NaturalStatTrick is not a fan of Adrian Kempe’s goal attempt classifying it as low-danger. I would call it more in the medium range – it was a lateral pass but there was also no traffic. Either way the rest of the game Markstrom was simply superb – 1.86 expected goals against with just the one low danger 5v5 goal against. He was tremendous in aiding the PK and as the Flames defended their lead late.
Today’s Specials – The penalty kill was a major reason Calgary not only got the two-point gain but also for the reason the Kings got no points. They were aggressive, well positioned, active sticks and no nonsense when they could get a touch with the puck. The power play also looked dangerous but that was more Johnny Gaudreau stickhandling a storm around everyone than a proper unit. I did not like the second unit with Stone – it felt the entire time the Flames were intentionally just looking for Stone and it made them easy to defend. He’s got a big shot but he’s no Ovechkin – no need for the forced pass.
Player Spotlight – Chris Tanev – This was an unsung performance from him as well as Gudbranson. Full shot blocking mode when down a man, not letting anything even find its way to Markstrom. As usual he has been remarkable with his stick positioning and even better than expected in his puck movement. Already Tanev has put up career-high totals in points this season, his defence continues to be remarkable nightly as well.
Flashalytic’s 3 Stars –
1) Johnny Gaudreau
2) Matthew Tkachuk
3) Chris Tanev
The Flames continue their road trip on Wednesday against the Anaheim Ducks at 8 p.m. MT.
(Stats compiled from Naturalstattrick.com // Game Score from Hockeystatcards.com)