Beyond the Boxscore: Calgary Flames come back to earth, struggle to finish against Blues

By Shane Stevenson
10 months ago
The St. Louis Blues had their best shutdown guys go up against Calgary’s top line tonight and win. The depth lines still had plenty of scoring chances that could have kept Calgary in it, but nobody other than Backlund could come through. The Blues fourth line significantly outmatched Calgary’s tonight too, but the other line struggling was a more prominent reason for getting just one goal.
CF% – 54.39%, SCF% – 58.89%, HDCF% – 71.53%, xGF% – 60.48%
It’s a Team Game – Parayko and Mikkola bounced back, and Ryan O’Reilly concentrated on playing expert defence. The result was not a pleasant homecoming for Matthew Tkachuk and his band of goal scoring misfits. It was presumed the Blues would respond with a proper effort after the spoonful of pain Calgary fed them earlier in the week and they did not come up short on effort.
Corsi King – Mikael Backlund (76.60 CF%) came ready with a massive differential in overall attempts for, so were Milan Lucic (74.24%) and Dillon Dubé (72.67%). The Blasty Bros once again play well enough to deserve a bounce but just can’t seem to be on the receiving end of one. Chris Tanev (65.05%) saw the least attempts against him of any blueliner.
Corsi Clown – I really liked the last two games where I didn’t have to say anything here. It gets worse when the returning player at the bottom was Elias Lindholm (33.62%). Craig Berube had a game plan adjustment to counter what he saw from the Flames top line – he implemented his strategy (using a former Selke winner and telling him to focus on defence can help too) and the Blues walk away with the two points.
Taken By Chance – The good news here is that while the Blues never allowed the Flames top line to get any good chances Johnny Gaudreau (49.22 SCF% // NA HDCF%) and company didn’t see one come their way either. When Johnny Gaudreau was on the ice at 5v5 no skater from either team recorded a high danger chance. The same can be said for Lindholm (49.17% // NA) and Tanev (85.14% // NA). Oliver Kylington (71.61% // 100%) was a little loose on his feet tonight, but he also never surrendered a high danger attempt.
xGF% – Clearly the best forward line was Backlund (87.91 xGF%) – Mangiapane (86.63%) – and Coleman (81.72%). When Mickis feels it in the middle of the season he tends to go on a decently lengthy scoring streak. Every time he puts a string of goals together, I watch him with a little more intent. Backlund with swagger is a dangerous player. One quick touch on the play Mangiapane made to set up the goal – he intentionally feigned a shot and then delayed until the D-man had fully committed to coming out towards him in the slot before he dished it off to Backs just above the goal line. Smart instincts and a great assist. (See above video for details)
Game Flow –

Now this would indicate Calgary controlled play for stretches in the second and third periods. What it doesn’t show is that Calgary is significantly more distant in this game from the total of xG they achieved in either of their last two. This is closer to normality – look Calgary had two lines play good tonight. The third line has played 4-5 games of really good hockey in a row and have one goal to account for it. Some may say “Monahan” but he got 2 of 3 on the power play and one assisted by Gaudreau and Tkachuk – not classifying those as third line contributions. The chances are there but the goals need to start materializing to take some pressure off the top line every night.
Game Score – Players that were above 2.00: Mikael Backlund (3.06 game // 0.55 average) and Andrew Mangiapane (2.17 // 0.87). Players below 2.00: Nikita Zadorov (-2.12 // 0.50) and Jacob Markstrom (-3.05 // 0.13). The balance was a predominantly middling game by the majority of players from both teams.
Shot Heatmap – 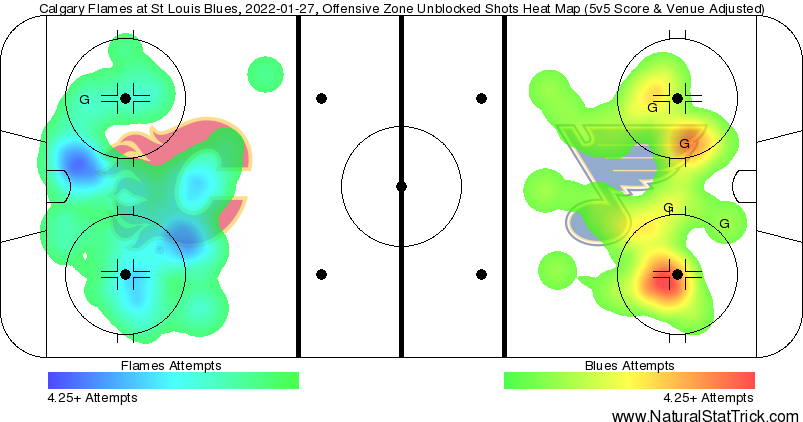 Not the normal amount of heavy attempts from in tight, but still a decent enough amount that I’m impressed Husso didn’t allow any of those extra dangerous chances by him. He’s been lights out this season for St. Louis in a truly tremendous come from seemingly nowhere story. The other abnormality in this games chart is the excessive amount of attempts from the top of the left face-off circle. Usually Calgary makes a more of an effort to get to the net – the Blues were able to keep Calgary out of the right side crease quite effectively. I see you, Colton Parayko.
In The Crease – 1.55 expected goals against with 3 medium danger goals and one high danger goal getting by Markstrom. He wasn’t the sharpest tonight after getting a shutout the night before. No doubt the coaching staff would have asked Markstrom if he was good to go tonight, and he would have said so. Regardless this isn’t the game tape I’d pick for an example of peak Markstrom ability.
Today’s Specials – It seems the players forget that just because they aren’t the one with the puck on their stick it doesn’t mean they can’t still move. Johnny is the only player that actively tries to move around to open himself up for passing lanes. Very easy to jump defend and start shorthanded rushes (which the Blues did multiple times) when you can anticipate the exact passing lane that the point man is going to use. Move your feet people, please.
Player Spotlight – Blake Coleman – The last member of the second line to really be discussed with any breadth in this one – Blake Coleman may not have scored tonight be he has 7 points in his last 10 games. That’s 50% of his production in the last 25% of the teams’ games played alone. He has found some level of consistency with Backs and Mange that allow them to be decent secondary scoring options. Let’s not forget though – Calgary could still use another top 6 forward to really help them take another step to real contention. This team now could do it (that’s not a hot take, Montreal was just in the cup final and look at them now) as long as they get in, but another piece would go a long way.
Flashalytic’s 3 Stars –
1) Mikael Backlund
2) Andrew Mangiapane
3) Chris Tanev
The Flames return home to play the Canucks at 8 p.m. MT on Hockey Day in Canada on Saturday night (Sportsnet, CBC).
(Stats compiled from Naturalstattrick.com // Game Score from Hockeystatcards.com)