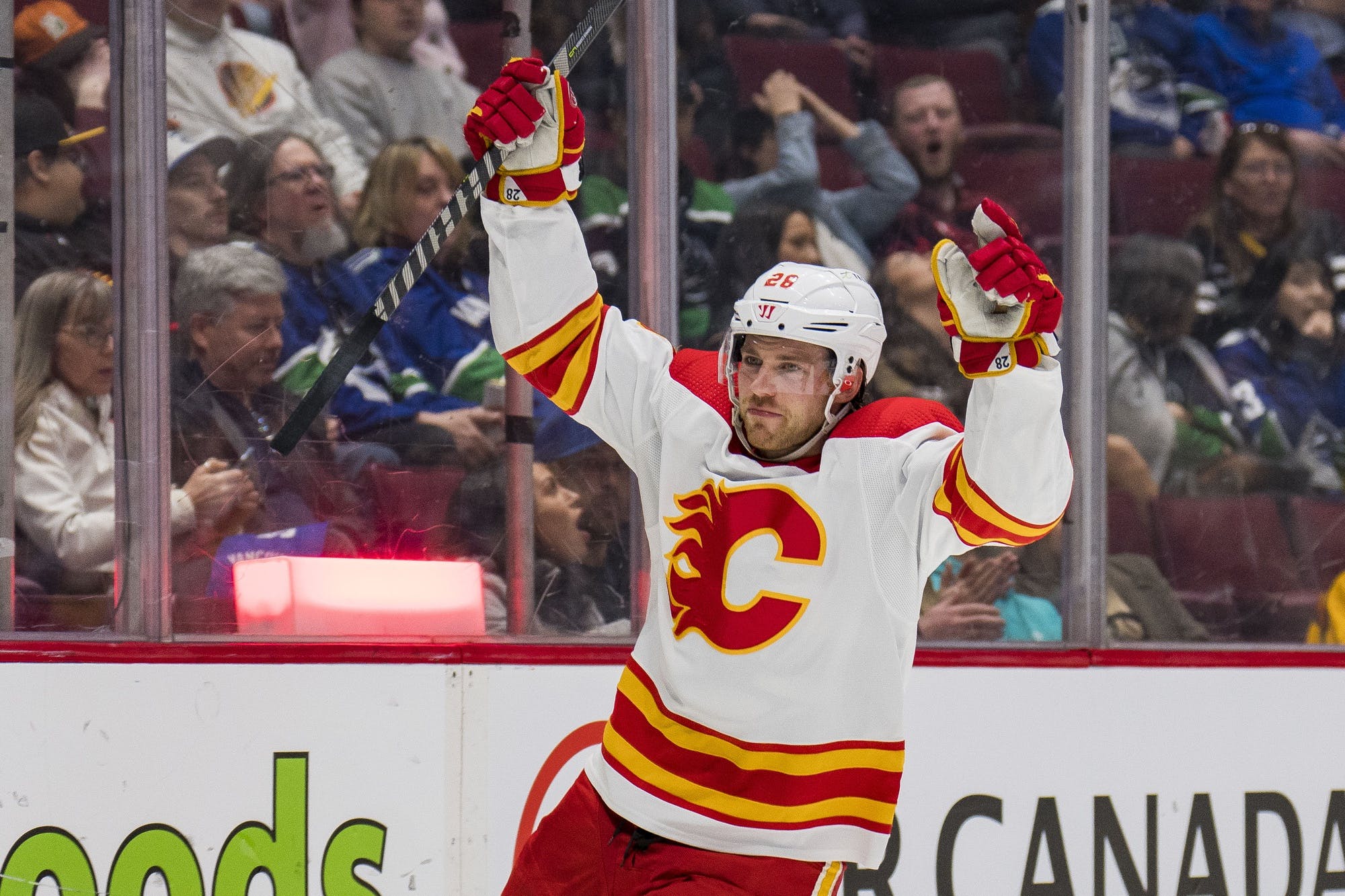 By Shane Stevenson
8 months ago
It kind of shocks me that in a game this important for the Vancouver Canucks – one where the coach even said he emphasized how important it would be to have a strong start – that they would come out that flat-footed. Now that’s a bit of the Canucks, but a massive amount of credit to the Flames and their players too. The top line was split up for a full game for the first time this season and it sent a ripple effect throughout the entire lineup. Every man on that team knew why the lines were changed – if you want to keep pushing that means you can’t take any games off. Even tonight Calgary kind of fell asleep in the third with the 5-goal lead. The coach visibly wasn’t happy – and he won’t be unless he gets that cup ring with the Flaming C on it. It’s comforting as an observer to consistently see Sutter keep the entire group in-line and on track.
CF% – 67.26%, SCF% – 74.51%, HDCF% – 78.32%, xGF% – 76.94%
It’s a Team Game – I don’t like to break out the word dominated too often, but that’s about the only way to describe the first period. The Canucks failed to even get attempt for about an 8–10-minute stretch in the middle of the frame. Calgary had more collective quality in terms of chances less than 5 minutes into this game than they had in the whole match against Buffalo on Friday (5v5 only) – more on that when we hit Game Flow section. The Canucks did manage to hem one line in the Flames own zone to start the second period. 3 and half minutes of non-stop pressure with no goals and no zone exits. Calgary finally gets the puck out of the zone and immediately score – after that the Canucks players looked fairly despondent.
Corsi King – Trevor Lewis (79.58 CF%) back in the role he was made for and excelling in it – I am beyond pleased with his signing and feel he’s brought a unique look to this team/roster that was needed. He is a great defence-first fourth line player that can win faceoffs and kill penalties. He’s done what is expected of him so far this season and then some – extremely effective when utilized to his strengths. Mikael Backlund (79.23%) got reunited with an old friend he’s spent many, many games in the NHL playing with in Matthew Tkachuk (78.54%). Natural instant chemistry between them – like a pair of old friends that can go a year without seeing each other but never miss a beat when they eventually meet up. Wonderful stuff.
Corsi Clown – One shift was all it took to get one guy below 50%. Erik Gudbranson (43.47%) was a victim of that long shift to start the second period – heck Sportsnet/HNIC was tracking his shift length live. He doesn’t get stuck out for that one shift – he doesn’t end up below the halfway line. The goaltender had a chance to cover the puck once or twice on that shift – something the Flames starting goaltender does frequently rather than letting his teammates run around. Some botched zone exits by the Flames forwards – but structurally that entire long shift nobody let the Canucks come in for an easy close shot – Canucks had to work and couldn’t penetrate the Flames defensive structure at that point in the game.
Taken By Chance – Go off Noah Hanifin (65.72 SCF% // 75.83 HDCF%). The Flames blueliner was involved in over 10 different high-danger chance attempts, the most amongst any skater in the game. He was rewarded for his efforts with the first goal of the game – although if you shoot that one on Demko 100 times he probably makes 98 saves. Of all the lines that would have had an excuse to being outmatched it would have been the one with the new guy on it, but even they thrived. Calle Jarnkrok (64.33% // 73.40%) and company were well above water on Saturday night.
xGF% – One person I thought was flying right out of the gate was Johnny Gaudreau (89.35 xGF%). He was being his shifty self – carrying the puck for longer stretches and finding his linemates for prime attempts. Johnny already finished with an almost 90% expected goal ratio and that doesn’t even count the early chance he fed Tyler Toffoli (89.54%) which went over the net. Elias Lindholm (92.25%) and Johnny were doing more board work with Tkachuk gone – which caused JG to get played a bit more physical than he usually gets – but were able to succeed with Toffoli in that spot.
Game Flow –

I said i would explain the quality vs BUF and the quality vs VAN when we got to this section. On the far left and right of this chart you can see some numbers. Those numbers vary from image to image based on how the game played out. The farther the line gets out from center the higher the numbers go – it’s the total in expected goals based off all the shot attempts that hit the net in the game. Any major attempts from the opposition and the line moves towards their side of the chart.
In the game against Buffalo the farthest the line ever got to Calgary’s side was 0.63 – Calgary had 0.63 worth of expected goals attempts 5 minutes into this game. They ended it with just shy of 2.8 in this game – 4x as much as the night prior.
Game Score – Andersson led the way with an impressive 5.46 game score, but Hanifin (4.29) and Tkachuk (4.22) also had scores well above 4, also exceptional. Only three of the 19 Flames involved in this game had negative scores: Monahan (-0.05), Vladar (-0.09) and Lucic (-0.28).
Shot Heatmap – 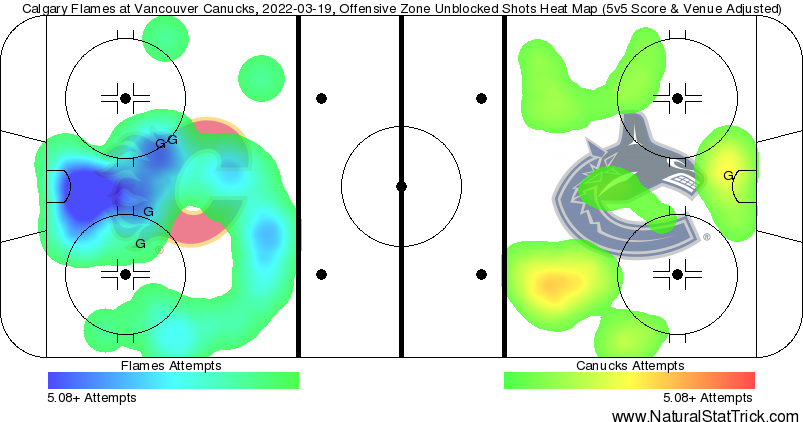 The word I used to describe the Flames shot image – in a tweet sent to friend of the program and FlamesNation founding editor Kent Wilson, hello Kent – was peninsula. Last year there were way to many attempts for Calgary from the point – Giordano was a big contributor there he would always fire pucks on net from distance through traffic – but this season there’s a priority from everyone to try and take attempts from closer to the net. Statistically the closer you get to the net the more likely it is the goal is going to go in, Calgary’s entire roster has bought into that mentality. Sometimes it results in one pass too many but more often than not it results in a plethora of goals.
In The Crease – I feel a little bad for Vladar because I do think the Flames players left him out to dry a bit in the third period. Late game coming off a back to back with a 5-0 lead you can kind of understand why, but he has a good thing going until then. I was upset about him not being able to absorb the puck or find a way to cover it in that long shift to start the second, but he ultimately gave up no goals on that shift so he did his part. 1.38 expected goals against with one high danger 5v5 goal getting by him. Remember Boeser did beat him and hit the post too, but that goes both ways because Lindholm missed a completely open net in the first period too.
Today’s Specials – Johnny Gaudreau wanted that power play goal so bad – you could see it in the way he was playing. There are times when Johnny goes into an absolute beast using his speed to find new lanes to drive the net or to create a new passing lane. JG13 had already came close to scoring on some nice dekes 2-3 times in the game, but it was the wrist shot that tickled the twine. Flames super PK got their armour dented too – wouldn’t be surprised to see them shut the next two teams out on the powerplay out of sheer spite because of that.
Player Spotlight – Darryl Sutter – I’m not using this section to actually talk about Sutter I want to talk about my opinions on the new lines. Mid-season I was against ever splitting up the Gaudreau-Lindholm-Tkachuk line – so when I saw Pat Steinberg’s tweet about the lines (Thanks, Pat), I was expecting myself to overreact. The thing was I didn’t – I felt it was better to see what can be iced now in terms of mixed-up lines so the team can see what works and what doesn’t before the playoffs come. Better to experiment and mix and match now before you get to the second season – this way you’re prepped and can know exactly what each. Combination is expected to give you. Opening day of the playoffs I would still expect 13-28-19 back together, but for right now the different looks are a great thing.
Flashalytic’s 3 Stars –
1) Matthew Tkachuk
2) Noah Hanifin
3) Johnny Gaudreau
The Flames will next play at home against the San Jose Sharks – Tues., Mar. 22 at 7 p.m. MT.
(Stats compiled from Naturalstattrick.com // Game Score from Hockeystatcards.com)