Beyond the Boxscore: Calgary Flames fail to score, drop Game 2. 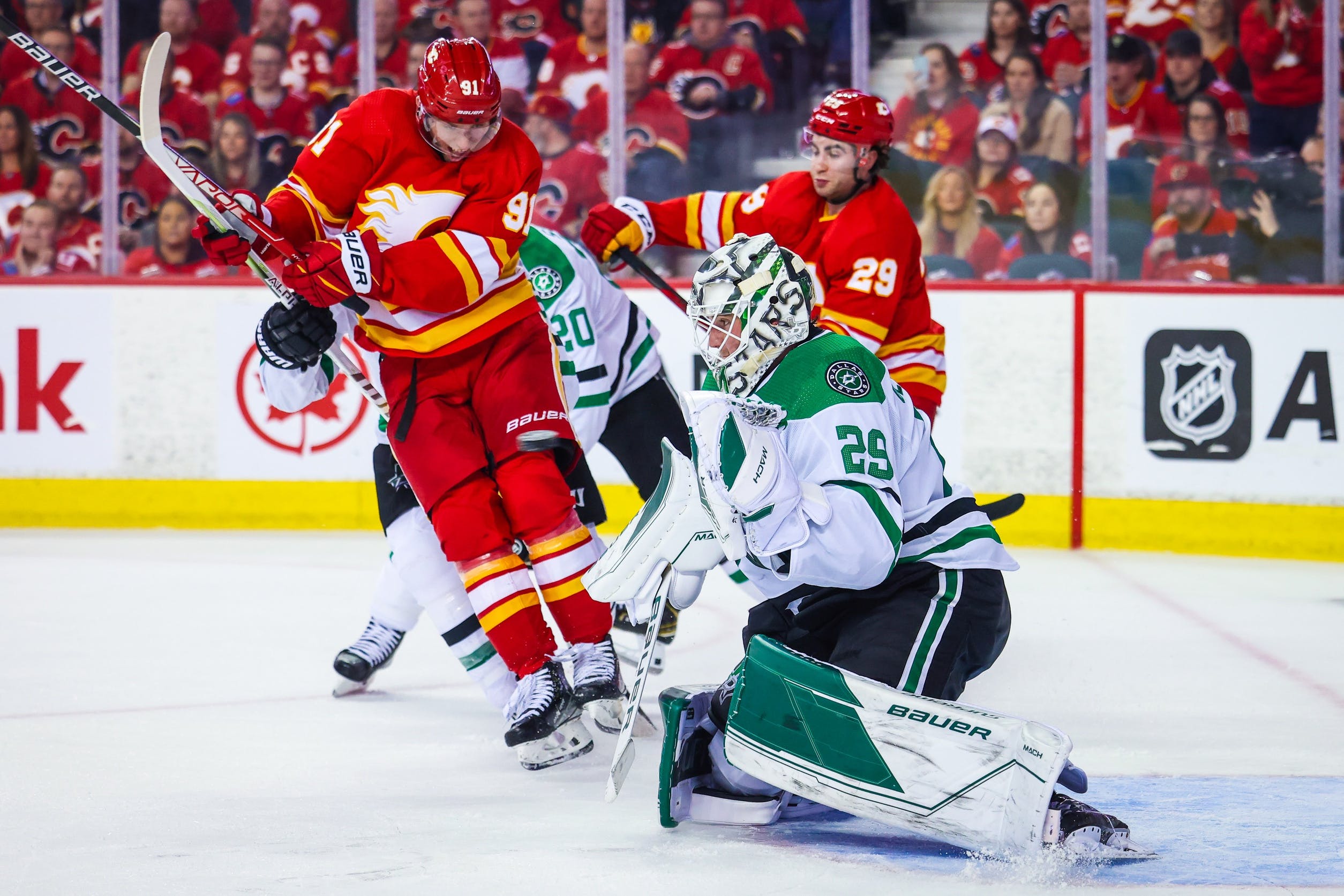 By Shane Stevenson
7 months ago
It was another tight checking game that fed more into Dallas’ gameplan than the Flames’. The Stars have been very adept at clogging up the neutral zone with a trap and making it very difficult for Calgary to move through it. I thought the third period was once again all Flames as they pressed hard to try to score. They do need to get more traffic around Jake Oettinger, or any traffic at all, if they are going to continue to settle for point shots. The kid is on his game and pressing the crease needs to turn into an emphasis heading into Texas.
CF% – 60.81%, SCF% – 52.96%, HDCF% – 44.13%, xGF% – 49.67%
It’s a Team Game – The majority of the attempts by a significant margin, yet not a victory in the high danger chances. They did not do a good enough job at getting to the crease. Players like Andrew Mangiapane and Matthew Tkachuk made a living out of it all regular season but for two games now the Stars have been able to stop them. The Flames defence has been fine – 1 goal against a goaltender through 6 periods is always great – which makes it even harder to be tied 1-1 through 2 games.
Corsi King – Oliver Kylington (69.75 CF%) was all over the ice in a positive way, using his speed to maintain possession. Johnny Gaudreau (69.58%) and the top line was also pressing intently all night – a shame they couldn’t come through. There were more players with positive nights all around than there was negative, that darned Stars goalie can be beat – Johnny did beat him early in the first only to lose the goal to an offside call.
Corsi Clown – Brett Ritchie (45.39 CF%) and Erik Gudbranson (45.42%) were on the low side. The second game the Stars were able to attack the Flames third defence pairing. Nikita Zadorov (48.29%) seemed to have his controller shut off for a second in the third period there – just stopped moving with the puck on his stick. He was waiting for some sort of play to develop, but at least have your feet moving. You are a sitting target that can easily be checked if you are standing still out there for any reason.
Taken By Chance – Nikita Zadorov (24.47 SCF% // 20.85 HDCF%) and Gudbranson (24.47% // 20.85%) really struggled the hardest to quantify any offence. Those two gave up the most amount of high danger looks on the entire roster. The Flames checking line with Milan Lucic (29.36% // 0%) still brought their physicality to this game – which is absolutely needed – they just couldn’t convert it into any significant in terms of offence.
xGF% – Other than the third pairing and the big checking line every single player helped win their matchup against the Stars. Blake Coleman (60.47 xGF%) was one of 4 players with 60% expected goals share or higher. The Stars defence was less strong than in game one, but the goaltending – once again – was the single biggest reason Dallas won this game. If they want to steal the series Oettinger has to play like that nightly – so far he’s pretty much 2 for 2.
Game Flow –

Calgary really did grab some momentum in the third period – something they really needed when the game started. It’s playoffs and its tight – need to find a way through the adversity.
Game Score – Normally the losing goaltender ends up in the negative scores but Jacob Markstrom (0.59 game // 0.26 average) was superb yet again. Elias Lindholm (0.74 // 1.49) finished as the top Flames forward and Chris Tanev (1.23 // 0.89) finished as the top defenceman for the them.
Shot Heatmap – 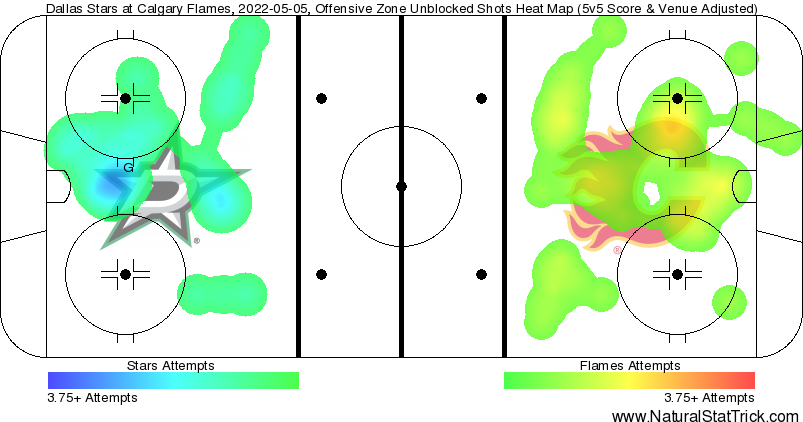 Calgary has got to get that area around the crease to have more volume. The Stars had less attempts overall but more from the slot than the Flames. Compared to what the average heatmap looked like through the regular season these two teams are still playing complete defence first – someone is going to break first in their defensive coverage. How that goes remains to be seen.
In The Crease – The Dallas goal was a deflection goal that never should have happened. Noah Hanifin sent a bad pass up the boards instead of going around the net – and the king of deflections made Calgary pay. Markstrom was beyond great everywhere else in his game facing 1.14 expected goals against. A 5v5 SV% of 0.929 with a medium danger goal getting by him.
Today’s Specials – No power play goals, meaning the penalty kills were perfect. In fact, there was more 4v4 this game than I had seen in a long time. There was one 4v4 sequence that ended up being a bit faster and more furious in terms of odd man rushes than normal but amounted to no goals. Kind of the entire script of the first two games. Maybe game three will see multiple goals that got by goaltenders.
Player Spotlight – Noah Hanifin – One bad play doesn’t define anybody. I criticize him for making it and I praise him now for not letting it get to him. After that happened, he followed it up with consistent strong play and ended up on the positive side of his nightly matchup. Noah is a bonafide top defenceman on this team and will be essential should Calgary want to go anywhere.
Flashalytic’s 3 Stars –
1) Jacob Markstrom
2) Oliver Kylington
3) Blake Coleman
The Flames series with Dallas is tied 1-1, Game 3 is in Dallas on Saturday at 7:30 p.m. MT on all your favourite channels (CBC, Sportsnet and TBS).
(Stats compiled from Naturalstattrick.com // Game Score from Hockeystatcards.com)