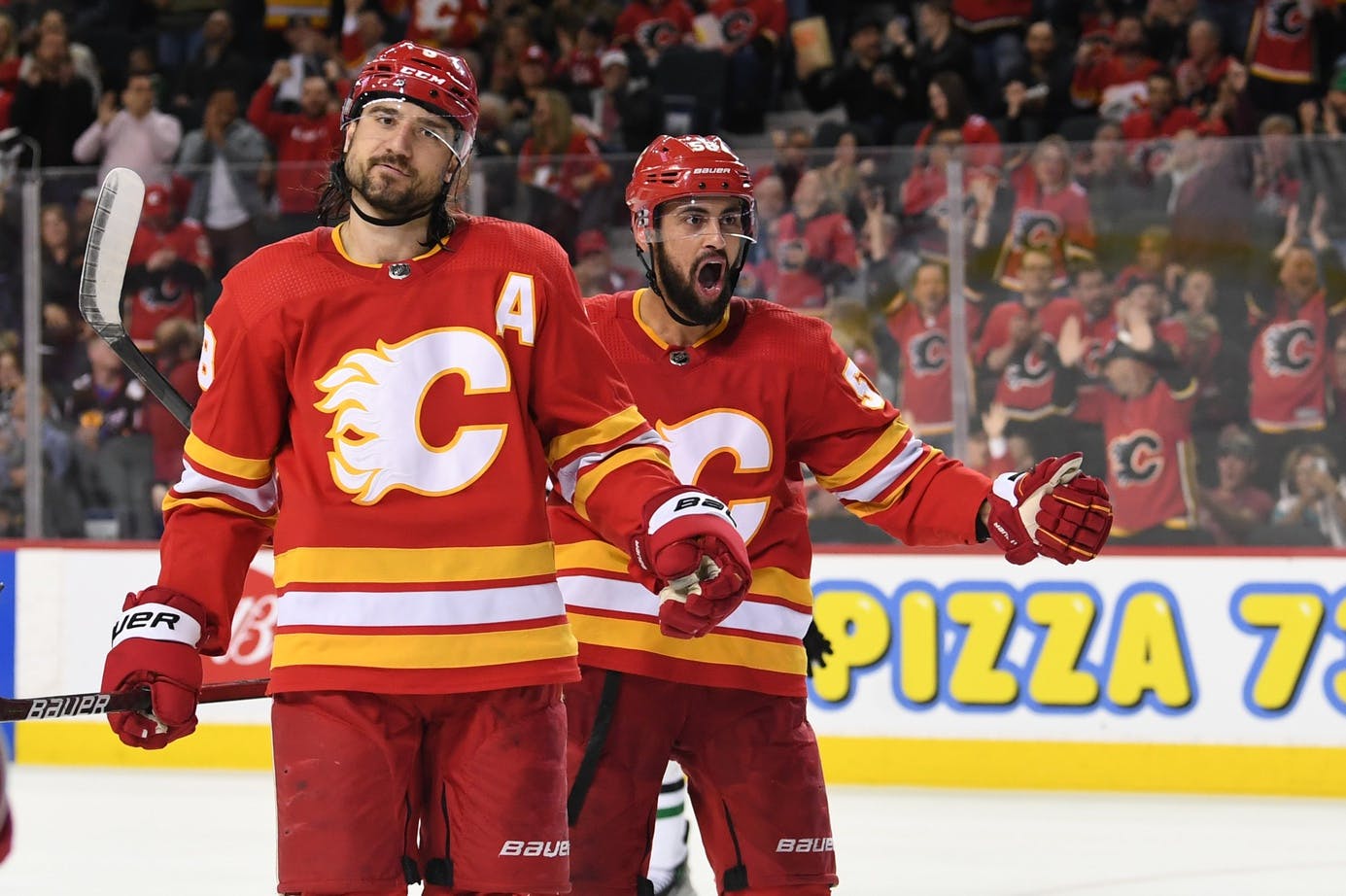 By Shane Stevenson
7 months ago
Make no mistake the Dallas Stars gave the Calgary Flames quite the match-up Thursday night. Desperately trying to cling to the last wild card spot the Stars gave Calgary a defensive effort that was executed quite well. It’s not to say that Calgary wasn’t up to par themselves, they had to outwork the Stars to get their goals. A quality test for a team as they warm up before.
CF% – 49.22%, SCF% – 41.78%, HDCF% – 35.76%, xGF% – 41.82%
It’s a Team Game – There were extensive stretches where Calgary couldn’t find their way into the Stars zone – every attempt was turned back the other way. When they did get extended possession, they struggled to get off a quick or dangerous scoring chance. It was largely a first period where neither team wanted to be the first to make a mistake. It ended up being Oettinger that made the mistakes as the Flames get two low % goals later in the game.
Corsi King – Andrew Mangiapane (71.20 CF%) didn’t get as much 5v5 time as everyone else, but he does get top unit PP and rotation PK unit shifts. He’s been playing very strong of late and it’s been good for the team and their win/loss record. Jarnkrok (58.06%) had another positive game in term of shot attempts. In fact I noticed with Mikael Backlund and Elias Lindholm in the box Jarnkrok got the assignment for the own-zone 3-on-3 faceoff.
Corsi Clown – In terms of overall match-up it wasn’t a positive for the Flames top line. Elias Lindholm (39.39%) wasn’t blown away but still saw a high number of chances come against him. Milan Lucic (32.86%) and Trevor Lewis (35.92%) came in next to the bottom. No complaints from me on Lucic – he was aggressively checking every forward he saw which is what his role is.
Taken By Chance – Nobody really ran away in a positive sense when it comes to high danger chances. Oliver Kylington (54.02 SCF% // 100 HDCF%) and Chris Tanev (58.41% // 100%) finished off with a strong defensive performance from both – no high danger chances seen by either of them. Matthew Tkachuk (55.96% // 77.83%) also finished with positive scoring chance ratios – lots of odd line combos due to the penalties (and type of penalties i.e too many men) had the ice time and usual pairs apart from each other more than usual.
xGF% – Brett Ritchie (51.25 xGF%) does end up on the positive side of the goal share more than he finishes below it. Dillon Dubé (54.24%) had his strong run of play continue – effectively using his speed more effectively each game. Not a good day for three former Kings as Lewis (21.0%), Lucic (21.58%), and Toffoli (24.66%) in terms of scoring chances and quality.
Game Flow –

Neither Dallas or Calgary ever took control of the game from one another. A lot of neutral zone play and forced dump-ins make for a tight scoring affair. Calgary hardly losing the momentum being less than 0.8 standard deviations away from pure equality. battle
Game Score – Chris Tanev (2.70 game // 0.93 average) and his clutch goal helped propel Calgary to victory. Andrew Mangiapane (2.37 // 1.07) has definitively put his mini slump behind him. Even with the ENG tag beside it having as many goals as Mangiapane is a special thing to achieve in the NHL. Oliver Kylington (2.21 // 0.94) was his usual smooth skating self-Thursday evening which is always a positive sign.
Shot Heatmap – 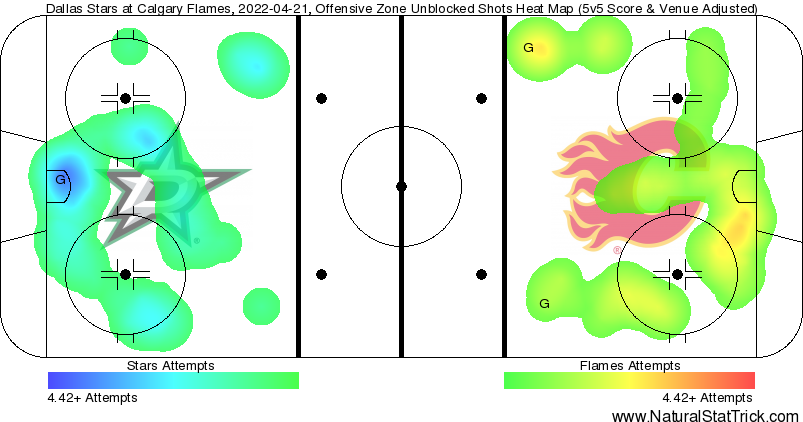 Inside the dome it surely seemed the Flames had some better chances, but the heatmaps do not lie. Anytime Calgary wins and you’re in the building lately it’s loud and ready to cheer on the team. Playoffs are finally going to be here to test the true merit of this roster.
In The Crease – Markstrom gets the W on a night where the win could have meant something even a bit more. 1.88 expected goals against with a 0.947 5v5 SV% and only one high danger chance getting by him. The division title is Calgary’s – quite literally just four games before the big dance. Markstrom looks like he’ll be more than up to the task.
Today’s Specials – This game special teams is something special to talk about. Everything from 5-on-4 to 3-on-3 and everything in between all happened in this game. A rare occurrence that fans of just this team might never see again. Nobody was able to score on the obscure special teams, but both Dallas and Calgary eventually cashed in on regular 5-on-4 power plays.
Flashalytic’s 3 Stars –
1) Andrew Mangiapane
2) Matthew Tkachuk
3) Chris Tanev
The Flames’ next game is Saturday versus the Vancouver Canucks.
(Stats compiled from Naturalstattrick.com // Game Score from Hockeystatcards.com)