Beyond the Boxscore: Calgary Flames get back to form, go full throttle on the Stars 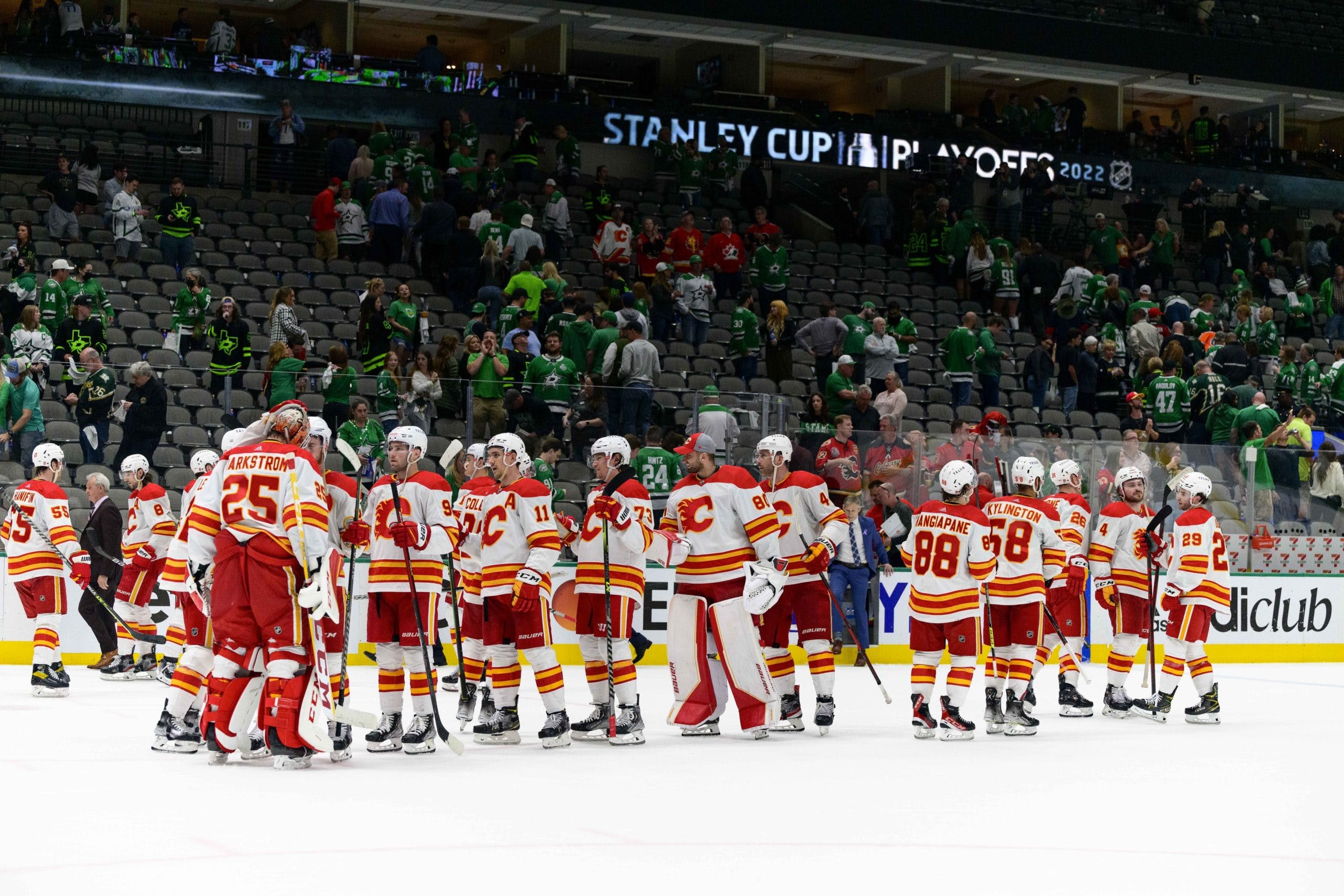 By Shane Stevenson
8 months ago
Now that’s the kind of match the C of Red is used to seeing their Calgary Flames play – one where they largely dictated the play and made the other goalie work for his saves. The after-whistle shenanigans were put away off the opening face-off as Milan Lucic took it upon himself to take the draw against Jaime Benn to challenge him. With Lucic letting his whole team know he was going to take care of the physical stuff the skilled Flames players were able to focus on hockey. The series is tied 2-2 and Calgary now knows they can take over a game against the Stars.
CF% – 69.4%, SCF% – 72.22%, HDCF% – 77.5%, xGF% – 74.12%
It’s a Team Game – Dallas’ coach Rick Bowness had harsh words for his team after this one – outright calling their play bad in his post-game media availability. While the last three games the Stars have been able to keep things close this time they fell behind right from the start. Extended zone possession multiple times, keeping the puck away from the opposition and tiring them out, all while giving Oettinger quite the workout. More games like that and he may break down… maybe.
Corsi King – Texas grown Blake Coleman (83.74 CF%) led all forwards for ratios while Mikael Backlund (76.42%) had the most overall raw Corsi attempts. There were not really any set lines for the Flames – with 11 forwards Darryl Sutter did a lot of mixing and matching to keep his players fresh. The Flames coach said after the first game where Andersson got ejected some of his defenceman looked tired. His fix was adding Michael Stone (72.98%) in and spreading out some minutes. It worked tremendously.
Corsi Clown – The Flame who was the closest to 50% was Milan Lucic (56.68%) – further showing the Flames team-wide domination in puck possession. Nobody earns the CC distinction from game 4.
Taken By Chance – Andrew Mangiapane played the least amount of 5v5 ice time of all forwards (6:39). In the practice lines before the game, he had Mangiapane running with the Lucic/Lewis combination – Mangiapane hasn’t had the strongest series but had decent numbers in limited ice (59.98 SCF% // 100 HDCF%). How about mentioning being involved in over 13 high danger chances in one game, that was Oliver Kylington (77.67% // 87.86%). Another player that got over 10 high danger chances was Johnny Gaudreau (80.11% // 73.24%).
xGF% – Leading the way in quality share was Dillon Dubé (84.23 xGF%) after having the lowest numbers in game 3. A solid bounce back – I loved his shifts when he was on the ice with Lucic (63.65%) and Toffoli (74.78%). The three bring Blasty brother energy to the game when they get to play together. Calle Jarnkrok (73.62%) had another game with some great looks as he continues to search for his first goal as a Flame.
Game Flow –

2.8 expected goals of momentum in Calgary’s favour when the final horn sounded – and that isn’t factoring in all the ones from the powerplays. Flames really did find massive success in game 4 in terms of quality chances. Wearing down the Stars with long possessions did the Flames favours.
Game Score – At the time of writing Game Score was unavailable. Please check hockeystatcards.com to see the results.
Shot Heatmap – Part of the reason Calgary was able to limit the number and quality of the Stars chances was the sheer fact they had a sizable advantage in term of puck possession. The Flames players also started charging the crease from below the goal-line. Making goalmouth scrambles. I honestly believe that if you simulated this game another 9 times the Flames would score more than 4 in each simulation – they were that good at getting chances, Oettinger just stopped most of them.
In The Crease – It was a 5v5 shutout for Markstrom who continues to duel with his counterpart. Oettinger is getting all of the attention because Calgary has started to throw some heavy dangerous chances his way, but Markstrom has had to make his fair share of 10-bell stops himself. 1.60 expected goals against on 24 5v5 shots – Markstrom deserves way more credit than being directed his way for Calgary being where they are.
Today’s Specials – The power play came through on the 5 on 3 when they needed to most. Just getting one past a goaltender playing out of their mind is enough to re-invigorate hope within the team. The penalty kill once again played quite well, even earning themselves a three on one at one juncture of the game. The result: Oettinger arm save off Tanev.
Player Spotlight – Oliver Kylington – I’m singling Kylington out because he stood out to me – constantly using his speed to be in the right position and helping maintain long stretches of possession. His skating alone is such a dynamite feature for a blueliner, and he was playing at his best in game 4. If Kylington plays the way he can it aids in Calgary’s puck possession in a major way.
Flashalytic’s 3 Stars –
1) Jacob Markstrom
2) Johnny Gaudreau
3) Oliver Kylington
The Flames are tied 2-2 with the Stars. Game 5 is Wednesday night in Calgary.
(Stats compiled from Naturalstattrick.com // Game Score from Hockeystatcards.com)