Beyond the Boxscore: Calgary Flames get burned by Blues 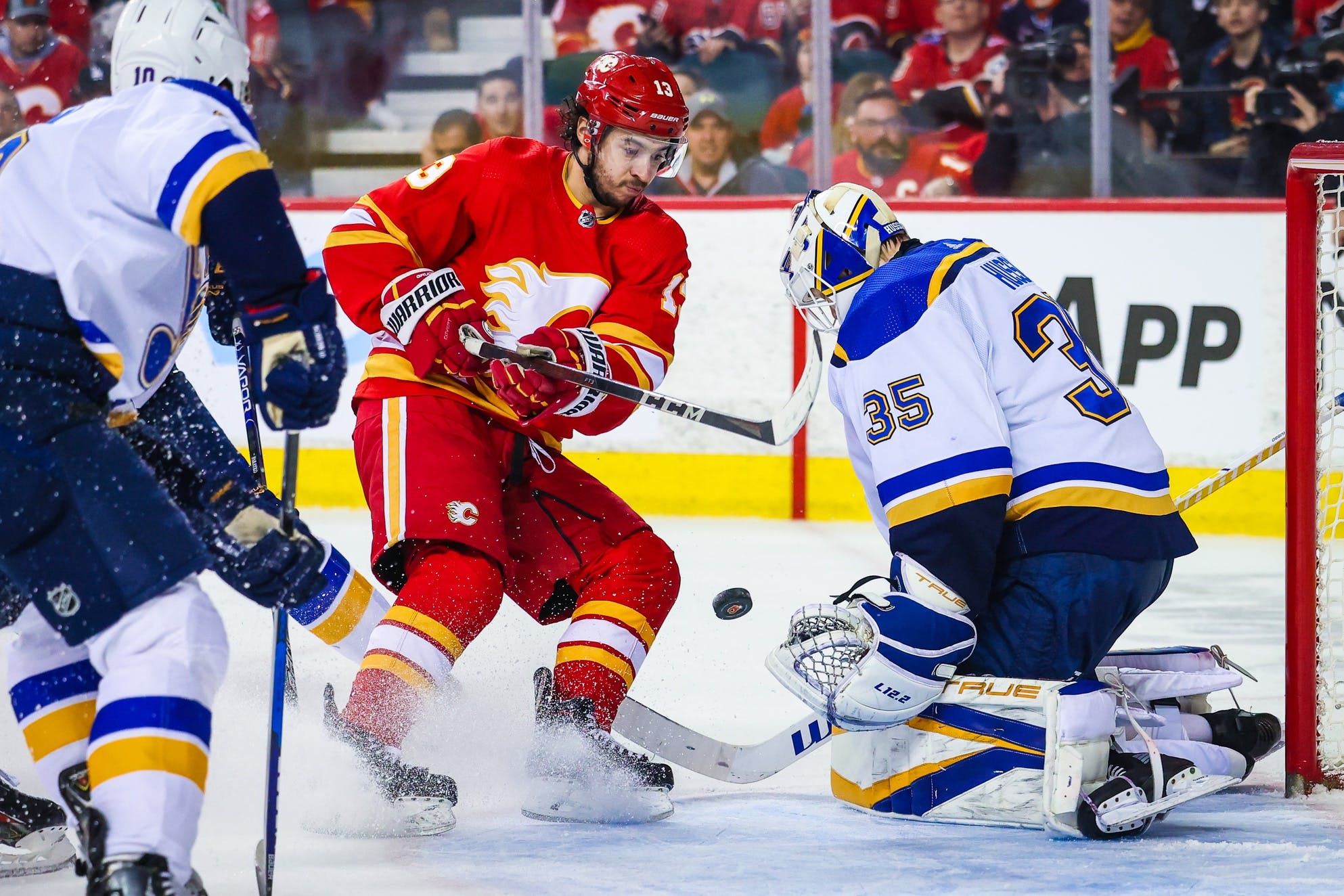 By Shane Stevenson
7 months ago
The Calgary Flames had more chances, more dangerous opportunities, more possession, and more pressure throughout the majority of the game – but they also had more significant mistakes when they were made. In the offensive zone the Flames were consistently getting thwarted by Ville Husso but in the defensive zone there were many missed assignments and leaks in their coverage. It does say something that the best players on the team did not give up until the final horn sounded – but it wasn’t enough to best the very skilled Blues team.
CF% – 60.18%, SCF% – 56.27%, HDCF% – 65.75%, xGF% – 61.97%
It’s a Team Game – The stats show Calgary dominating in terms of amounts and qualities of chances – because they truly did have more than the Blues. Shots at one point were 30-10 in favour of Calgary yet the Blues only trailed for 4:42 of this game. In the third period Calgary very clearly understood they were up against the trap once again and had a set play where they actually paused in their own zone for a second before stretching out a tip pass to go right through all the stationary defenders. The result usually ended with Calgary possession after some intense boards battles down low. Interesting thing that we’ve only had to see from Calgary lately as teams start getting geared up for potential playoff hockey.
Corsi King – Nikita Zadorov (76.18 CF%) and Erik Gudbranson (73.93%) once again lead in terms of the difference in Corsi attempts. They really are good at letting the skilled forward group keep possession down low – not often do they try anything odd at their offensive blueline. Simple hockey and simple choices make for less odd-man rushes. Milan Lucic (68.33%) came to play with a strong performance on Saturday.
Corsi Clown – Elias Lindholm (49.14 CF%) gave up the most corsi events against and he still grades out as equal in the category. Tyler Toffoli (48.84%) got into a mix up in coverage with Ryan Carpenter (67.35%) on the go-ahead goal – a victim of new guy, new team. A month from now I would like to presume they have that figured out but only time will tell. As for today it isn’t ideal but there should be some extra motivation to prove themselves on this road trip.
Taken By Chance – The 4th line was playing so well – Brett Ritchie (54.09 SCF% // 68.82 HDCF%) had scored earlier while Milan Lucic (56.37% // 77.08%) was instrumental in the turnover that led to Noah Hanifin’s (49.83% // 62.95%) game tying goal. On said goal Brett Ritchie appeared to suffer a serious injury to his leg and we do hope he’s okay. 7 high danger chances for the energy guys in their first ever game together – we’ll see a new look next game.
xGF% – Johnny Gaudreau (66.39 xGF%), Matthew Tkachuk (71.25%), and Elias Lindholm (63.27%) won’t be fans of Ville Husso after this game. The Blues goaltender was sharp in many of his stops and always seemed to have the answer for a Lindholm rocket or a sneaky Tkachuk play. Nobody on the team really lost their total quality share – it really came down to individual mistakes on the goals that happened. The Blues were extremely opportunistic too – at the end of 2 periods 2 of the blues 4 high danger chances went in vs. Calgary who had 1 of 12 through get by.
Game Flow –

Cumulative expected goals have Calgary winning by 1.5 goals at 5v5. Add in the Blues power play goal and that’s still Calgary expecting to win by 1/2 a goal. Now that’s just all statistics but it does go to show you that Calgary did find ways to get dangerous scoring opportunities. I’m not going to sit here and say they were bad in the offensive zone just because they lost – they scored 4 without a power play. Area that needs cleaned up is the quality of the mistakes made.
Game Score – In the entire game Erik Gudbranson (2.25 this game // 0.53 average) had the best score with his one assist. Noah Hanifin (2.16 // 0.90) and his two points came just behind. 17 of 19 Flames skaters did earn a positive game score tonight.
Shot Heatmap – 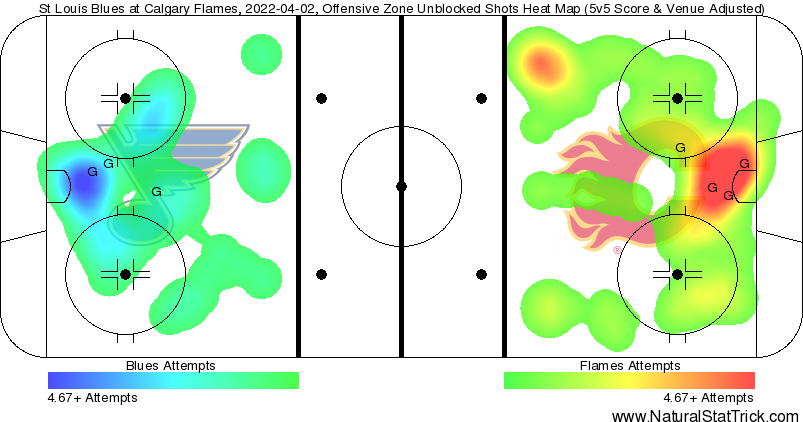 Good news is Calgary found a way to swarm the crease at ridiculous levels again, bad news is the Blues also know how to get to the net to attack. Blues were more efficient when they got their looks and that’s the game. All 3 games Calgary and St. Louis played have been high-scoring affairs – two teams with potent top lines. Calgary’s second line does need to figure out a way to turn all this possession and dangerous chances they get into tangible goals though.
In The Crease – He wasn’t exactly busy and may want that Nathan Walker stop up shot back, but Markstrom got the loss Saturday. 2.36 expected goals against at 5v5 and he let in 2 high danger and one medium danger chance. It isn’t very frequent where Markstrom doesn’t underplay his expected goals performance – tonight I do put some blame on his team as the defensive zone play was nowhere near the level of consistency fans have become used to seeing this season.
Today’s Specials – Missed assignment on a penalty kill – forward came a little too far out and left a lane to the middle – gave O’Reilly one chance at a decent shot and boy he did not miss. Just adds to what I said earlier about the Blues being opportunistic. Only one power play for either team or Calgary got theirs cut In half by the period ending. It was a heavy game all night too – playoff feel (to an extent) for sure which is becoming the normal for teams in the hunt for a spot.
Player Spotlight – Milan Lucic – Two straight games where he was the guy that answered questions about the teams play. He played like vintage Lucic in this one with his physicality cranked up to maybe a 7 out of 10, he was one of the most dominant board players all night. He caused the turnover that led to the tying goal and was almost there to be the guy to tap it home. He’s struggled in a lot of areas lately, so it was nice to see him go off with a big performance.
Flashalytic’s 3 Stars –
1) Milan Lucic
2) Noah Hanifin
3) Erik Gudbranson
The Flames go out on the road to LA to face the Kings on Monday night (8:30 p.m. MT puck drop).
(Stats compiled from Naturalstattrick.com // Game Score from Hockeystatcards.com)