Beyond the Boxscore: Calgary Flames get front row seat to the Demko show 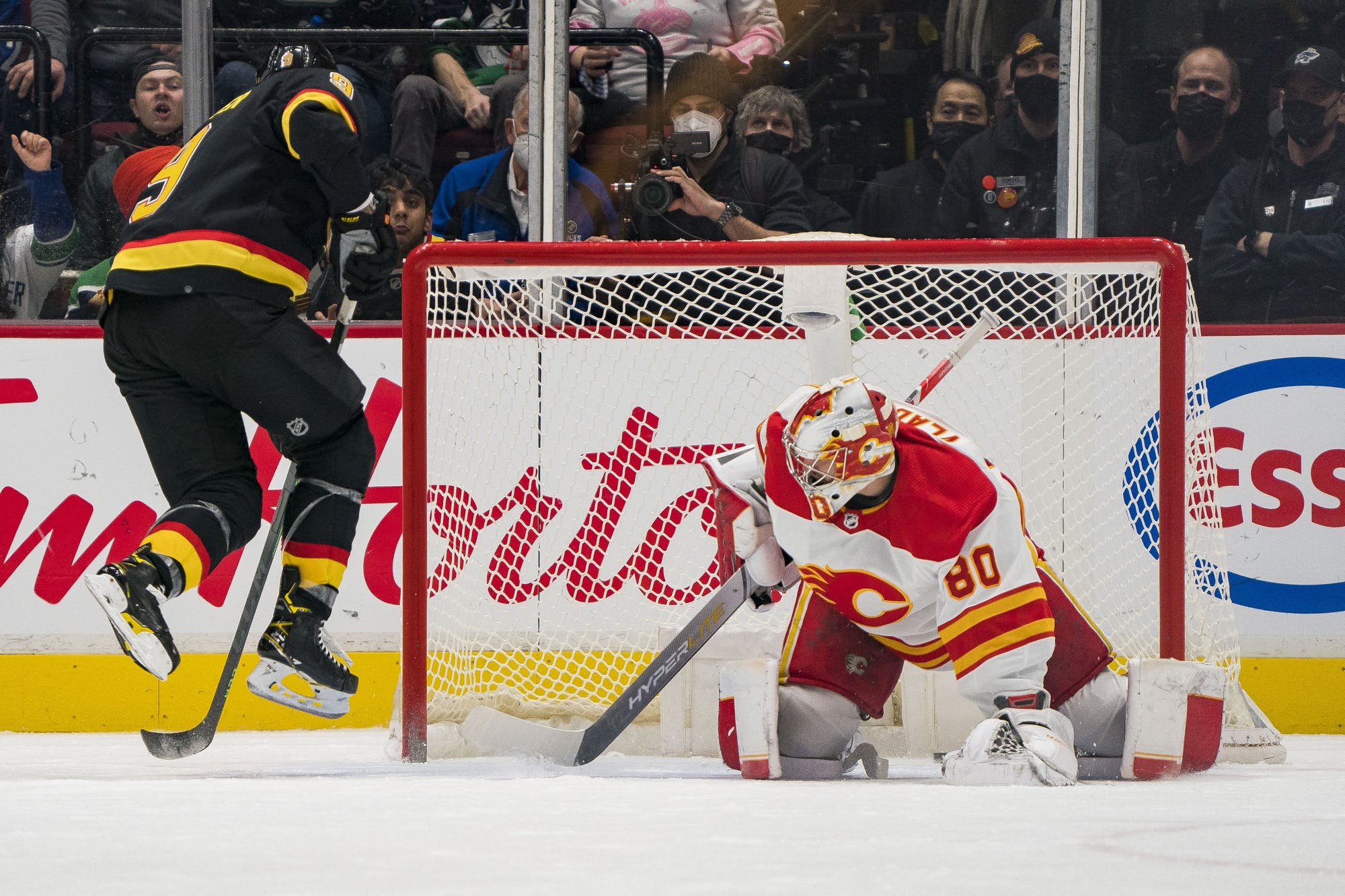 By Shane Stevenson
9 months ago
My old coach once told me – every now and then a game Is going to come around that ends up just an absolute stinker. You do everything right at 5v5, stick to the strategy and still end up losing badly. He said to chuck it in a bucket and move on from everything but one particular feeling – the disgust of the loss. Remember how much you hated losing like this and let it fuel you the rest of the way. Calgary just played one of those “bucket” games.
One other thing to remember? “A cushion is just a pillow with feathers.” – Darryl Sutter.
CF% – 58.09%, SCF% – 61.79%, HDCF% – 63.8%, xGF% – 61.32%
It’s a Team Game – No, I didn’t make those 5v5 numbers up – the Flames legitimately had an advantage across the board everywhere but where it counted through 2 periods. One of the recipes that other teams have used to beat Calgary (It’s really only the Oilers that use it) is to try and play as clean as possible and take advantage of Calgary on the power play. Vancouver’s power play was extremely lethal in this one – but the questions surrounding this match don’t stem from anything the Canucks did. No, the spotlight will be on referees Gord Dwyer and Jake Brenk who called as one-sided a game as I’ve seen recently. Make no mistake the penalties Calgary took were penalties (except Dubé) but the standard for what Calgary could get away with and what Vancouver could get away with were quite clearly not the same early in the contest. If you have to give former Lady Byng winner Johnny Gaudreau a misconduct maybe you should re-evaluate what you’re doing yourself.
Get the refs a post-game podium like the NBA – it’s time.
Corsi King – They deserved a goal or three, but Demko stonewalled the trio of them – Matthew Tkachuk (72.60 CF%), Elias Lindholm (70.90%) and Johnny Gaudreau (71.03%) seemingly spent every shift trying to attack the Canucks net. The first period saw them just maintain possession the entire time in the Canucks zone. Believe it or not the stingiest defensive team – in terms of quality of chances – in the entire league is the Canucks. A team that already gives up very little also has an all-world goaltender… wait this just sounds like the Flames. Keep an eye on the Canucks because if they can develop a few forward lines they’ll be more dangerous than anyone may give them credit for. Probably too little too late for the playoffs but they don’t seem to be trending towards a team that’s easy to beat.
Corsi Clown – Dillon Dubé (41.44 CF%) went from playing well and just needing a few bounces to the fourth line and it hasn’t helped him out very much. Toffoli (54.42%) had to bump someone down the lineup and early on it has been Dubé. A former Canucks had a rough night in terms of shot attempts too as Chris Tanev (45.13%) did not quite get the homecoming (with fans) that he wished for.
Taken By Chance – The Flames fourth forward line was the only Flames line not to generate a high danger chance for themselves, but not for a lack of effort. Trevor Lewis (63.97 SCF% // 0 HDCF%) had a few shifts where he worked his butt off to try and drive the crease, there just happened to be Canucks defenders in his way. Over seven high danger chances for Elias Lindholm (76.11% // 87.59%) as he tried to pass “Magic Man” Kent Nilsson for the longest goal streak in franchise history. That streak came to an unfortunate end as well as the winning streak. Erik Gudbranson and Nikita Zadorov didn’t allow a high danger chance against and did not see a 5v5 goal get past them.
xGF% – We’ll kick it off with the Flames third pair that has been getting better as the years gone on – Zadorov (68.92 xGF%) and Gudbranson (78.24%) kept things simple for themselves and didn’t get burned on the scoresheet for any minuses. The games rough giveaway was by Noah Hanifin (58.59%) who sent a yard sale pass at low speed right up the middle of the slot – Bo Horvat made him pay for it. Tyler Toffoli (42.05%) and Sean Monahan (38.51%) had a good first game together but it’s been a very middling to lower end stretch for the two ever since his first game here – maybe time to bump up Toff to play with Mange and Backs. That line itself was very cool tonight so it wouldn’t be splitting up a terribly hot line.
Game Flow –

So for those that don’t usually look at this because it may be slightly confusing to understand I’ll explain it a bit further. Every time the line dips towards the Calgary Flames side that means the Flames were able to get a scoring opportunity. The farther the line goes in any direction the more significantly dangerous the scoring chance was. It goes the same the other way too – and then the teams go back and forth the whole game. At the end wherever the line finishes up that’s how much the team won the quality share battle. This only counts 5v5 numbers as you can see when the power plays are in effect the line stalls out in one spot. Calgary was able to get more quality opportunities on aggregate, but hockey is an unforgiving game sometimes.
Game Score – No Flames hit that high impact score of 2.00, but Erik Gudbranson (1.96 game // 0.54 average) came close. That was without any points either so it really says how little he gave up at 5v5 this game. Ever since he and Zadorov (1.16 // 0.65) started getting the offensive zone starts the one aspect of their game they had trouble with has been removed – defensive zone transitions under pressure. Calgary’s coaching staff simply removed that from the majority of their duties and its helping the duo be positive impact players regularly – as well as helping them continue to develop. Long term both players will see growth in their game because of this season, whether their future is in Calgary or elsewhere.
Shot Heatmap – 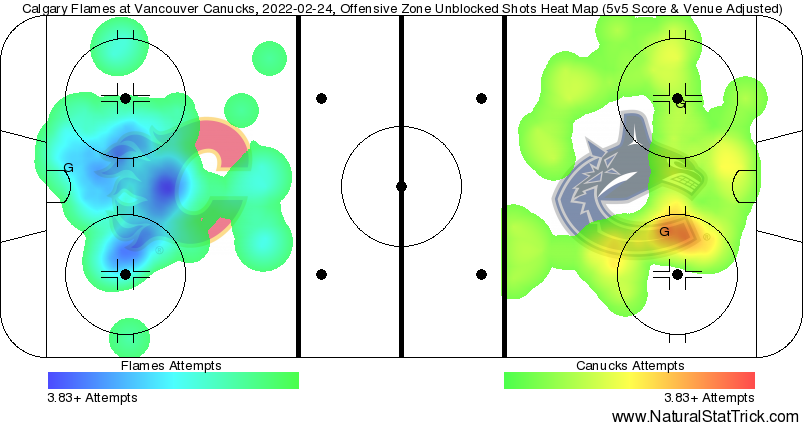 Simple analysis here – i’ll keep it short: Just wasn’t their night. Also wow Demko, wow.
In The Crease – I don’t even know what to say here to be frank. Vladar as cold as cold can be has to try and stop a power play that was dominating the Flames PK and then follows that up with one of the Canucks’ best 2 players getting a penalty shot. Markstrom had his skate literally implode on him – just a disaster all around. Thatcher Demko should have been a Flame too, boy has he turned into something special. We’re throwing this in the bucket and moving on.
Today’s Specials – Penalty kill, which had been something like 23 for their last 24 kills, got shellshocked by lightning quick puck movement and dangerous one-time options. No not the low danger one timers from the point the rockets from the faceoff dot Elias Pettersson was ripping off – that’s what I call dangerous. I would judge the Flames power play but (go back and read “it’s a team game” now)
Player Spotlight – Rasmus Andersson – I’m going to hark on one play he made, but its not really to criticize him more or less explain why it happened. Before the Horvat goal the Flames had possession of the puck in the attacking zone, Andersson took a shot but it went off a shinpad and back in the Flames direction. The problem is that Andersson had to take shots from the point because the Canucks weren’t letting any line without Gaudreau on it anywhere near the slot. By being so good down low in their own zone it forced the Flames to make plays on their attacking blueline which resulted in more odd-man rushes for the Canucks than we’d seen any team get over the span of the win streak. Unfortunate – and Razz played a decent enough game for a 7-1 loss as he could have – but interesting enough to draw attention to.
Flashalytic’s 3 Stars –
1) Johnny Gaudreau
2) Erik Gudbranson
3) Andrew Mangiapane
The Flames next game is 8 p.m. MT on Saturday night back at the ‘Dome against the very dangerous Minnesota Wild.
(Stats compiled from Naturalstattrick.com // Game Score from Hockeystatcards.com)
All right back to work you hooligans