Beyond the Boxscore: Calgary Flames get outpaced, outraced, and outgunned by Vegas 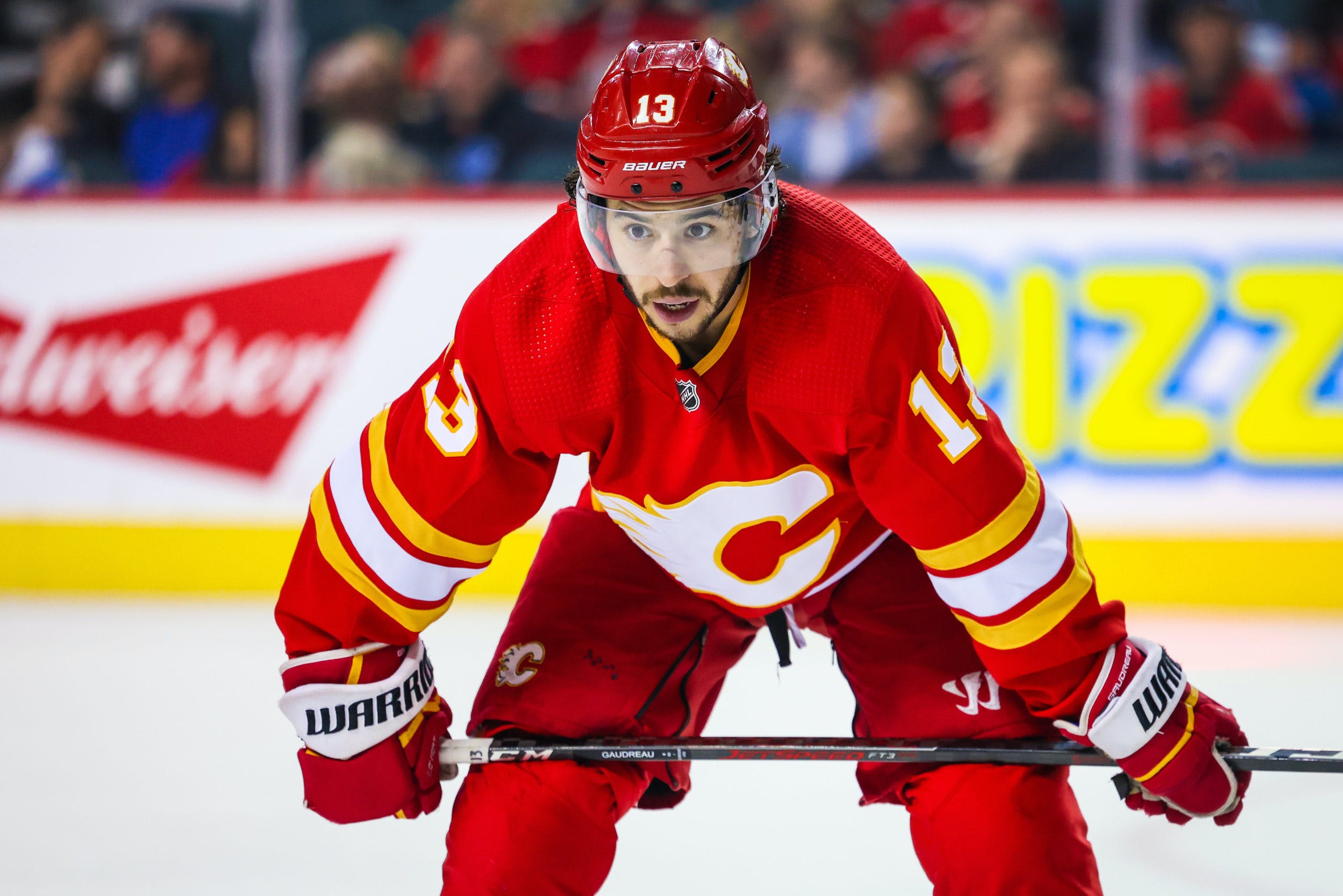 By Shane Stevenson
9 months ago
If you don’t show up with the rink to play a desperate team with the same level of desperate energy you can get walked on. Vegas, in a playoff battle to try and get the #2/#3 Pacific match-up, trounced the team that should statistically finish in first place. It was not a great effort again by Calgary who seem to have gotten really lost on their once crisp zone exits. The neutral zone turnovers stood out badly because the Golden Knights were able to get quite a few goals off of them.
CF% – 61.45%, SCF% – 49.01%, HDCF% – 43.92%, xGF% – 50.52%
It’s a Team Game – Calgary was able to control possession of the puck for the most of the first and third periods – but they couldn’t keep Vegas out of their crease. It was an all-around terrible night for Calgary’s back end in terms of playing defence and limiting good scoring opportunities. One goal the Flames defenceman went to clear the puck from the front of the net by whacking it right back at Markstrom – his rebound went to a Golden Knight who made them pay for their mistake. Could have used someone with a little more jump tonight – nobody really stood out as great for the Flames.
Corsi King – Blake Coleman (77.03 CF%) led Flames skaters in terms of ratio percentage but Noah Hanifin (76.04%) saw 10 more raw Corsi events for than Pickles did. A lot of high percentage numbers for the Flames but tonight that’s not a great case. Flames ended up throwing a lot of low percentage chances at the net, these count as Corsi events but do not hold the value for danger one should be seeking out. Playing behind by a lot can see some weird things happen and Calgary ended up having everyone take bad shots hoping for a bounce. It’s been a full week of this and it’s about time they get back to shooting from the opposition crease.
Corsi Clown – Milan Lucic (45.83%) really wanted to make Keegan Kolesar answer for his high hit on Chris Tanev. He ended up taking the penalty that Vegas scored on to take the lead – not exactly the retribution the Flames were wanting. When it was clear he wasn’t going to respond they should have learned to move on and focus on the game – especially with Tanev back and fine on the bench. They did not and that played into them not focusing on pucks going in deep and the lack of emphasis on goal scoring.
Taken By Chance – The only Flames player to see less than 2 high danger chances while on the ice at 5v5 was Coleman (77.60 SCF% // 77.09 HDCF%). The only two players to see more than 4 high danger chances for were Noah Hanifin (64.54% // 61.46%) and Rasmus Andersson (59.32% // 54.39%). Many who had high Corsi ratios finished with subpar danger numbers. Ryan Carpenter (17.66% // 32.13%) was one such player who struggled to get even generic chances.
xGF% – Tyler Toffoli (69.05 xGF%) and Mikael Backlund (65.69%) accompany Blake Coleman (82.41%) as one of two lines finishing on the positive side of the quality share. Dubé (53.76%), Jarnkrok (54.90%) and Trevor Lewis (55.82%) were the other line. Anytime Calgary has the top line not going the way the fully go the team tends to falter – need to learn how to win and contain games that line fails to score in if they want to go far in the postseason. Now remember – the top line wasn’t the usual top line, but both got outmatched by Vegas’ lines they played.
Game Flow –

I originally thought this graph was broke but it’s not often Natural Stat Trick is wrong. I checked the all-situations chart to make sure and this checks out. Neither team grabbed a decent enough chance while play was 5v5 to swing the tide after the Golden Knights burst for three. Too little too late for Calgary to get the VGK into a slower pace.
Game Score – 12 Golden Knights listed before the first Flame – Noah Hanifin (0.81 game // 1.11 average). That’s right the highest game score for a Flames player was 0.81 this match. Both Flames goaltenders finished with a negative score but it was far from their fault this game went the way it did.
Shot Heatmap – 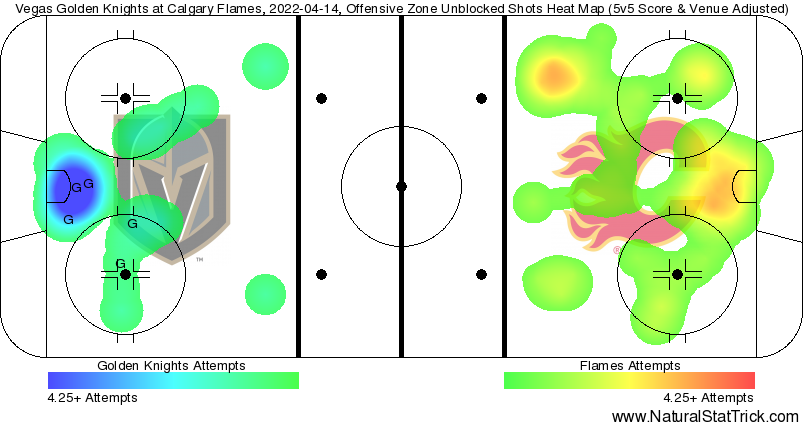 Why was the game 6-1? Look at the difference in density of shots from between the crease and hashmarks for both teams. Vegas didn’t see almost any net front resistance from a team that actively employs Nikita Zadorov and Erik Gudbranson. Personally I wasn’t particularly impressed with anybody, but was sad those two had struggles clearing their zone tonight.
In The Crease – Jacob Markstrom got burnt by a team playing sloppy in front of him. He came sharp and dialed in and then got left to dry in front of the net, got left to fend multiple breakaways and odd man rushes, as well as trying to deal with his own players whacking the puck back at him. This was hardly on Markstrom and more surrounded by a full team error. Markstrom face 1.38 expected goals against with 3 high danger and one medium danger chance getting by him. Vladar faced 0.18 expected goals against with one medium danger goal getting by himself.
Today’s Specials – Power play ended up being one for each team. It put the special teams on a similar level to each other. Vegas was aggressive on their penalty kill and too many Flames stood around and waited for the pass to get to them instead of being less lazy and skating into the pass. Allows for active killers to intercept pucks or cause turnovers because if the play is read properly, you can always be in position to accept a juicy rebound.
Flashalytic’s 3 Stars –
1) Blake Coleman
2) Dillon Dubé
3) Noah Hanifin
The Flames continue their season Saturday against the Arizona Coyotes on Hockey Night in Canada.
(Stats compiled from Naturalstattrick.com // Game Score from Hockeystatcards.com)