Beyond the Boxscore: Calgary Flames go for a skate, give Blue Jackets two points 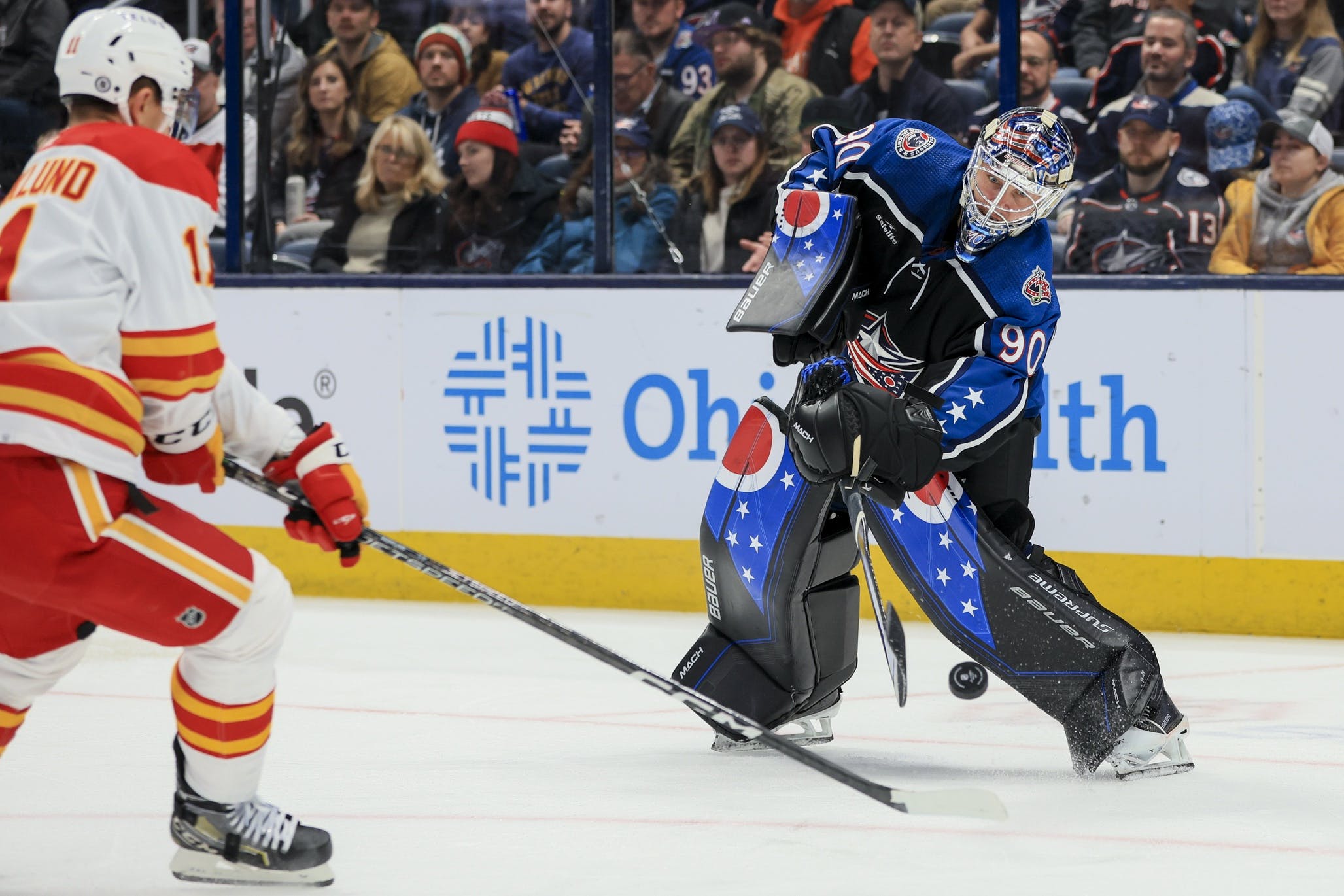 By Shane Stevenson
1 month ago
Let’s bring some perspective from the last few games in here to start. Against Arizona, the Flames only got enough offence to win because of the power play – only 1 goal at 5v5. The Wild game saw two 5v5 goals and now in Columbus they got zero. Averaging a singular 5v5 goal a game isn’t going to cut it. Calgary had the AHL’s leading scorer on the payroll today and didn’t use him. To each their own, I guess.
CF% – 48.92%, SCF% – 41.38%, HDCF% – 18.27%, xGF% – 33.38%
It’s a Team Game –  I will say that even if Matthew Phillips was on the roster it would not have stopped Noah Hanifin from having one of the more frustrating evenings of his career. Compliments to him in the sense that I could clearly tell you were trying to create offence, but it just wasn’t clicking at all in this game. The opening goal from Patrik Laine is because of terrible defensive coverage by 4 & 55. The top pair cannot come out and allow that to set the tone for the match. The bounce back came with about 3 minutes left to play – would love to see that urgency applied to every shift you’re trailing on the scoreboard.
Corsi King – Dillon Dubé (64.32 CF%) led all Flames players here. The line with the most speed found the most success at getting opportunities against the big physical Columbus defence. Nazem Kadri (64.19%) and Andrew Mangiapane (62.38%) were there too. The defence ratios didn’t really come in pairs this game – a result of seeing two of them go to the box at the same time. Chris Tanev (64.19%) and Nikita Zadorov (60.44%) stood above the rest. Partners Michael Stone (46.97%) and MacKenzie Weegar (50.65%) graded alright as well.
Corsi Clown – The ones who didn’t fair too well were Rasmus Andersson (39.82%) and Hanifin (31.82%). I normally pick the pair as a unit when faulting but again Hanifin struggled. I did think Andersson stood out in a major positive way at times late – keeping possession alive and being very mobile. The Mikael Backlund (50.00%) wingers also ranked a little lower: Adam Ružička (41.28%) and Blake Coleman (40.82%).
Under Pressure – 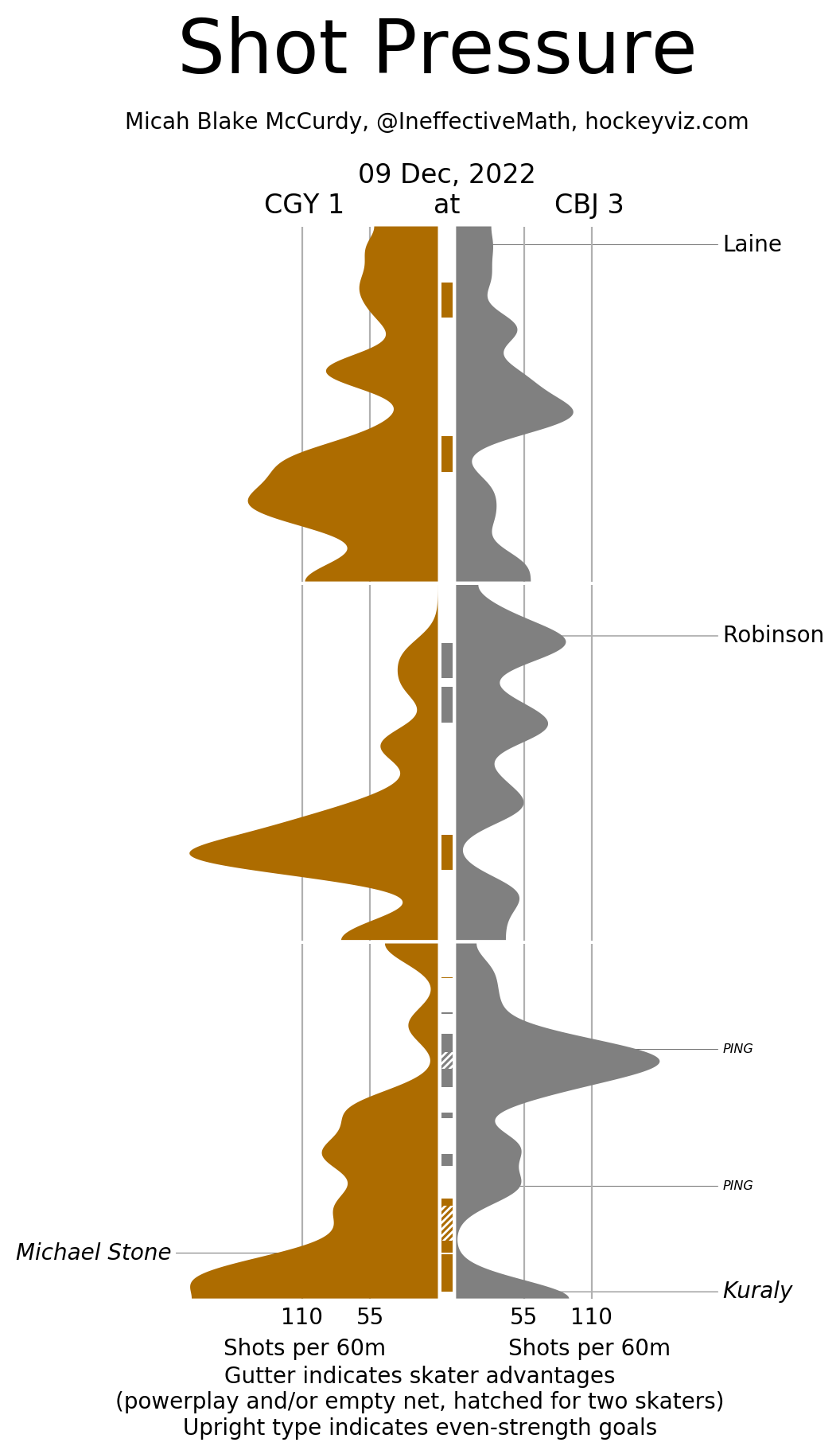 Taken By Chance – This right here was where the Flames faltered the most. They were not able to get to the middle of the ice for a shot and instead played with it around the perimeter. Instead settling for point shots or trying to snipe in shots from distance. Not enough of an effort to crash the crease from down low – something the guy in the other bench used to do. Mangiapane (61.30 SCF% // 0 HDCF%) was also very good at that but has struggled with it this season. Last few games it’s starting to come back, but they need to start getting a bounce too. No Flames player finished this game at anything better then 50% in high danger chances.
xG Breakdown –

xGF% – A pure sweep of subpar – something that very rarely happens. I’ve been doing these for 3-1/2 seasons, and I don’t recall another one off the top of my head – I’ll have to get some fact checkers together to see if my memory is correct. Best ratio went to Dubé (47.02%) worst went to Trevor Lewis (15.04%). Don’t ever refer to any part of this game tape to show anyone lessons in what to do right.
Game Flow –

What a terrible display of chances from the Flames.
In The Crease – While I don’t remotely blame him for the first goal – he can’t pull a cord and drag his defence into position – but it just sucks to see the first shot turn into a goal. Jacob Markstrom has done that 6 times now showing a mix of his struggles and the Flames tendency to be discombobulated at the start of games. This one saw the Blue Jackets create 1.70 expected goals against at 5v5 with one high danger and one medium danger chance turning into goals.
Player Spotlight – Radim Zohorna – He’s now officially played a game for the Calgary Flames, and he was okay. It’s not his job to get the Lindholm/Kadri lines scoring goals, but solid play is still what you’re searching for. He had subpar metrics in xG and HDCF%, then again literally everyone else was in that boat too. It’ll be interesting to see how long the team give him to get settled – with Kevin Rooney sent to the AHL earlier in the day we’ll have time to see how the story develops.
The Goals –
Flashalytic’s 3 Stars –
1) Dillon Dubé
2) Jacob Markstrom
3) Mikael Backlund
The Flames return to action on Saturday night against Toronto. Puck drop is just after 5 p.m. MT.
(Stats compiled from Naturalstattrick.com // Game Score from Hockeystatcards.com // xG and Under Pressure charts from HockeyViz.com // Game Flow and Shot Heatmap from NaturalStatTrick.com)
Editorials
Recent articles from Shane Stevenson