Beyond the Boxscore: Calgary Flames have rough outing against Ottawa Senators 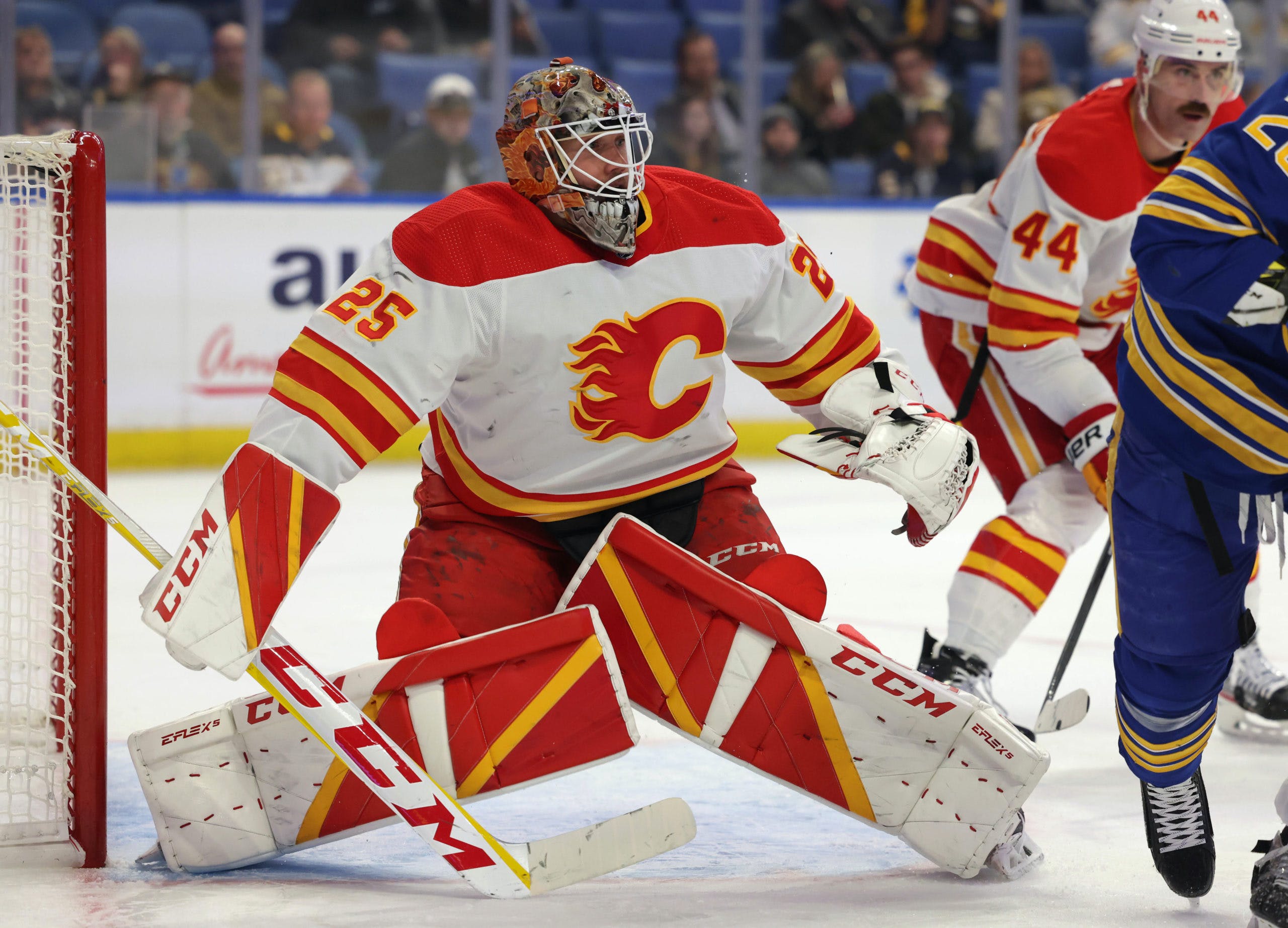 By Shane Stevenson
10 months ago
There is no way to put this lightly – the Flames were terrible for 30 minutes. It was not the roster construction – it wasn’t the coach – it wasn’t the arena being half full. This team came out flat-footed and completely unready to play. The sloppiest I’d seen them play this season against what I would consider a lower-level opponent. Now if they had got truly goalied I’d be here talking about bad luck, but it was very clearly the personnel on the ice for the entire first ½. They salvaged it with some really good third period play – too little too late.
Now this is just one game – and if the team is still feeling the effects of their COVID outbreak my comments may be too harsh, but bottom line that wasn’t good.
CF% – 43.67%, SCF% – 47.23%, HDCF% – 45.13%, xGF% – 48.42%
It’s a Team Game – These ratios are closer to 50% thanks to the third period push-back. After two periods every number above? Cut it down by 3-5%. May not seem like much but these scales are two-way pendulums – every time one team goes down 1% the other goes up the same margin – so taking 5% off each ratio is a 10% total swing in favour of the other team. I don’t need the numbers to tell you it was bad – the visual product was atrocious… well not everyone – about 5 players showed up with their usual game, and you could probably guess who they are off the top of your head.
Corsi King – Matthew Tkachuk (57.11 CF%) got the tip goal, but I can’t believe he didn’t score more. Some golden opportunities for him off beautiful passes from Johnny All-Star (50.90%). Milan Lucic (56.75%) finished behind Tkachuk and for some reason Scott Sabourin decided to fight him – Lucic won handily after taking a few shots early.
Corsi Clown – Tyler Pitlick (26.19 CF%) has been the guy everyone on social media has piled on of late. He was never suited for anything more than fourth line duty so he’s not really being put in a fair position to succeed. That’s on roster limitations, but in this one Blake Coleman (31.30%) and Mikael Backlund (35.18%) also got buried in their own zone. Makes sense because they are all on a line – and earlier in the year this combo was working well – it seemed to have lost some luster. More time together could help, but again Pitlick’s offensive ceiling isn’t top 6 calibre.
Taken By Chance – Fun stat: Johnny Gaudreau (59.87 SCF% // 81.82 HDCF%) and Matthew Tkachuk (67.27% // 81.82%) were on the ice for 6 high danger chances for and only 1 against. So that’s 6 out of 11 for the top line leaving 5 high danger chances for the other three lines. The opposite end of the spectrum saw Blake Coleman (28.75% // 13.38%) and Erik Gudbranson (44.04% // 13.47%) quantify one high danger chance for while seeing 5 go against them. I will give Guddy a break on one of those as Nikita Zadorov (41.26% // 16.27%) may as well have handed the puck off to a Senators player like he was the QB giving his RB the ball. Lucky that one didn’t go in too.
xGF% – Oliver Kylington (64.08 xGF%) and Chris Tanev (52.80%) both finished on the positive side of both quality and high danger chances. Now they still surrendered 3 high danger chances against but helped the JEM combo create their chances. For Flames defencemen Kylington was the top ranked across the board.
Game Flow – 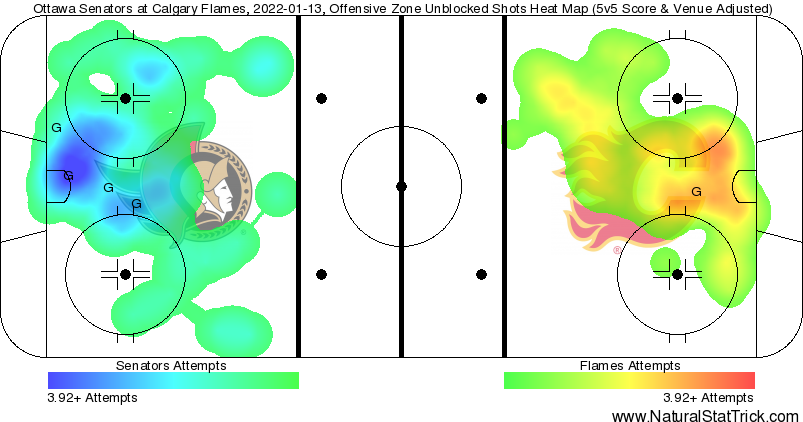 Also one of the top 3 worst at getting attempts in the crease all season. Against Ottawa too, they aren’t a particularly strong defensive team in any sense of the matter. Really emphasizes how bad those first two periods are.
In The Crease – Really nobody is safe from criticism here – part due to the fact the majority of them played bad and part because I’m sick of Calgary being the only team that can’t beat Ottawa. Markstrom is no exception, the first goal from Nick Paul was a back breaker. Right off the hop they were playing from behind on a goal that should have been stopped. I’m not pinning a breakaway or a blatant blueline turnover on him – those go on the defence – but that first and third goal hurt. 2.37 expected goals against with 2 high danger, 1 medium danger, and one low danger goal getting by him.
The low danger goals? They hurt the most. *Alexa play Rascal Flatts*
Today’s Specials – PK goes 100%, power play goes 0%, and the sky is blue. There’s more pressing issues at 5v5 lately, power play complaints have taken a back seat.
Player Spotlight – Johnny Gaudreau – Our All-Star. Six times in eight seasons, and he’s been playing his best hockey ever. He’s always trying his best, giving his best effort for the fans in the seats and it’s truly a pleasure to watch him play every night. There’s going to be some discussion on his contract situation coming up, but for right now I’m just enjoying watching him play in a Flames jersey every night.
Flashalytic’s 3 Stars –
1) Matthew Tkachuk
2) Oliver Kylington
3) Chris Tanev
The Flames will try to shuck the 4-game losing streak against the Florida Panthers Tue., Jan. 18.
(Stats compiled from Naturalstattrick.com // Game Score from Hockeystatcards.com)