Beyond the Boxscore: Calgary Flames have the Blasty Bros demonize the Devils 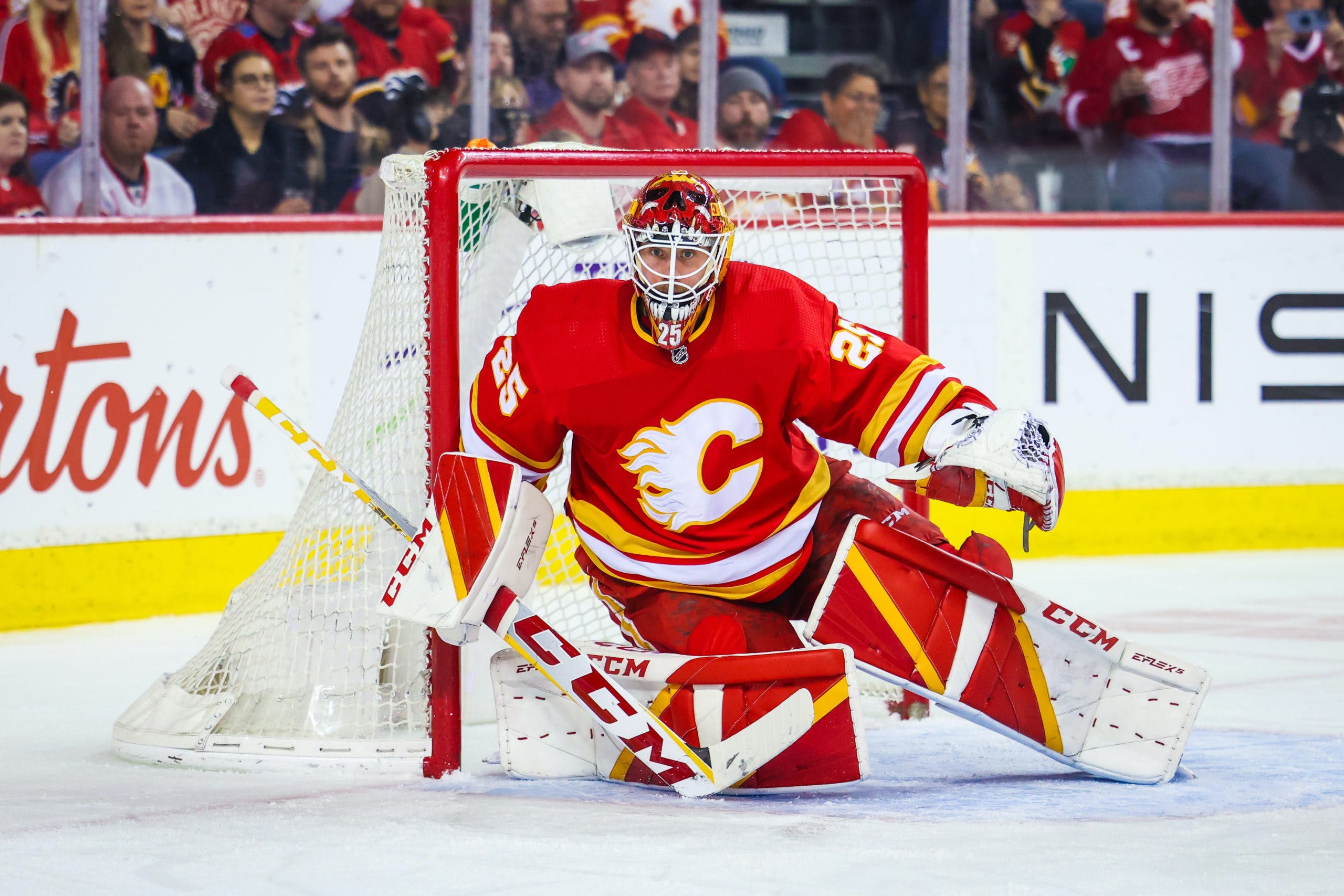 By Shane Stevenson
8 months ago
New Jersey came out of the gates with rockets on their skates trying to drive the Flames net early – they were met with an adequate defensive zone resistance from the Flames three defence pairings. After Calgary found the first goal, they never let New Jersey snag momentum again. Twice they responded to Devils goals 2 minutes and change later. It allowed them to eventually pile on in the second period before replacement netminder Jon Gillies shut the door in the third. Gaudreau would tack on an empty net goal to seal yet another home win. The Saddledome should be loud nightly with the way the team’s playing in every single game.
CF% – 66.58%, SCF% – 70.49%, HDCF% – 61.62%, xGF% – 64.61%
It’s a Team Game – After the Devils young skaters start-of-game surge wore off Calgary felt in complete control. They took over the neutral zone, limited the Devils to where they could get their chances from (first two goals were from far out), and pressed hard to attack the offensive zone. They bombarded poor Nico Daws in the second and chased him from the net for a second time this season. It was a typical 2022 Calgary home game, same intensity and drive to win as every other night in the dome. The players are laying it all out for the fans to watch, it’s been great to date.
Corsi King – Oliver Kylington (77.18 CF%) makes the Flames better when he plays. Kylington getting hurt again would take a massive amount of mobility of their back end. Tyler Toffoli (75.51%) hardly saw any pucks go towards Markstrom yet was out there for 2-goals against. That Subban goal was a rare one for Calgary to give up – those don’t happen often in Calgary these days. Elias Lindholm (69.79%) and company were up there in attempts as well.
Corsi Clown – I’m pretty sure this team has set a record for games in a season where every single player out chanced their opponent at 5v5. Again, this is regardless of danger and still counts shots that miss or are blocked, but that’s impressive. Meant they had the puck significantly more than their opposition.
Taken By Chance – Chris Tanev (73.48 SCF% // 73.92 HDCF%) was on the ice for the highest danger chances of any Flames player in the game – set a new career high in points tonight too. People tend to forget that because he plays so well on the defensive side of the ice that means he gets to spend more time in the attacking zone. If this team ends up doing damage in the playoffs it would not surprise anyone right now to see Tanev have a massive impact on that result. Blake Coleman (75.67% // 100%) and Trevor Lewis (72.15% // 100%) did not surrender a high danger chance.
xGF% – Oliver Kylington (83.68 xGF%) and Chris Tanev (79.19%) were in their prime forms tonight. Kylington back off injury keeps things simple and Tanev as usual is a rock for everyone. Johnny Gaudreau (74.55%) only found the scoresheet on the empty net but made some really skilled plays early in the game to get some quality chances. Andrew Mangiapane (59.11%) also hit 30 goals on the year – who could have ever seen this coming? (Proceeds to toot his own horn)
Game Flow –

I do love to see when this moves in just one direction. Calgary always responded with more significant chances than their opposition, wearing them out and eventually taking advantage of the continuous pushback. The 4th line was a beast tonight – Brett Ritchie has his first point on the season, i still think he comes out of the lineup when the new guy – Calle Jarnkrok gets to town.
Game Score – Matthew Tkachuk (3.06 game // 1.64 average) and his 3-point night are on top – bonus doing it while his dad was in the stands. Dillon Dubé (2.13 // 0.33) with an extremely nice display of his speed when he got his goal. That’s NHL level speed and Calgary needed it against the swift Devils.  Rasmus Andersson (2.02 // 0.97) has consistently been having consecutive major impact games – and he’s doing it playing the most minutes out of anyone on the Flames blueline. He’s signed for another 4 seasons at 4.55M after this year is over – just providing tremendous value.
Shot Heatmap – 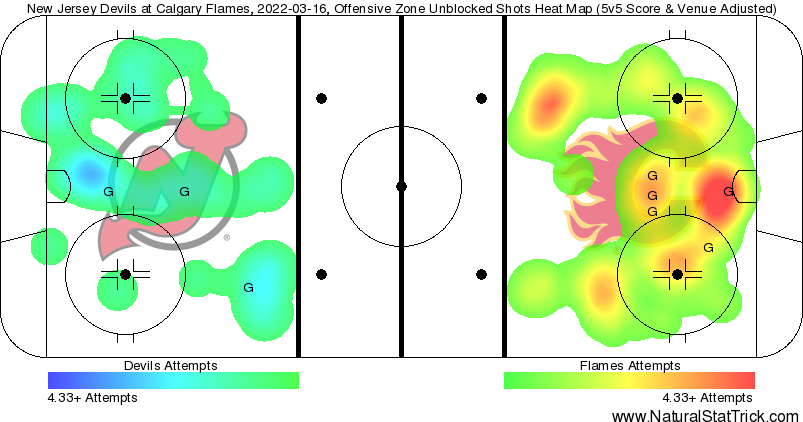 This is pretty standard for Calgary on most nights now. I was expecting more nights of pushback from other good teams, or maybe even a game where Calgary fails to show up with a full effort. Those have not happened yet this year – which only adds to the suspicion that this group has the potential to really do something special. They have the ability to go all the way – but nothings guaranteed and the work needs to be done well into the postseason for everyone on this squad to reach their goals.
In The Crease – He’s got 9 shutouts this season so I’m not even going to criticize the low-danger goal. That stuff happens over the course of a full a season and with Jacob Markstrom at an alarmingly infrequent rate. 1.53 expected goals of offence against at 5v5 with 2 high danger chances and one low danger chance getting by him. Markstrom also made some really good key saves when the score was 5-3 to allow the Flames to seal the win with the empty-net goal.
Today’s Specials – No power plays at all but the Penalty Killing was top notch. If Calgary had even surrendered one power play goal whose to say the Devils don’t gain some more momentum. The commitment to every single penalty killer on the Flames to play the same kind of pressure style as one another, aggressively checking the opposition if they don’t continuously move the puck around. It really gives teams that aren’t used to playing that kind of pressure fits.
Player Spotlight – Matthew Tkachuk – Matthew Tkachuk is currently on pace to get 97 points in 82 games. That’s including his 3 points from last night. Point-per-game alone in the NHL is insane but getting to 90 points is elite stuff. Tkachuk is one of the Flames with the highest hockey IQ – constantly getting puck into dangerous areas around the crease and always fighting down low to win board battles and puck possession. He creates space for himself on the ice and uses that space to create constant scoring chances. One of the most reliable forwards to be in proper defensive positioning – making sure the puck always leaves the defensive zone instead of turning the puck over. The Flames are very fortunate to have Matthew Tkachuk on their roster.
Flashalytic’s 3 Stars –
1) Matthew Tkachuk
2) Dillon Dubé
3) Oliver Kylington
The Flames next game comes Friday night as the Buffalo Sabres come to town.
(Stats compiled from Naturalstattrick.com // Game Score from Hockeystatcards.com)