Beyond the Boxscore: Calgary Flames keep the Oilers stars off the board 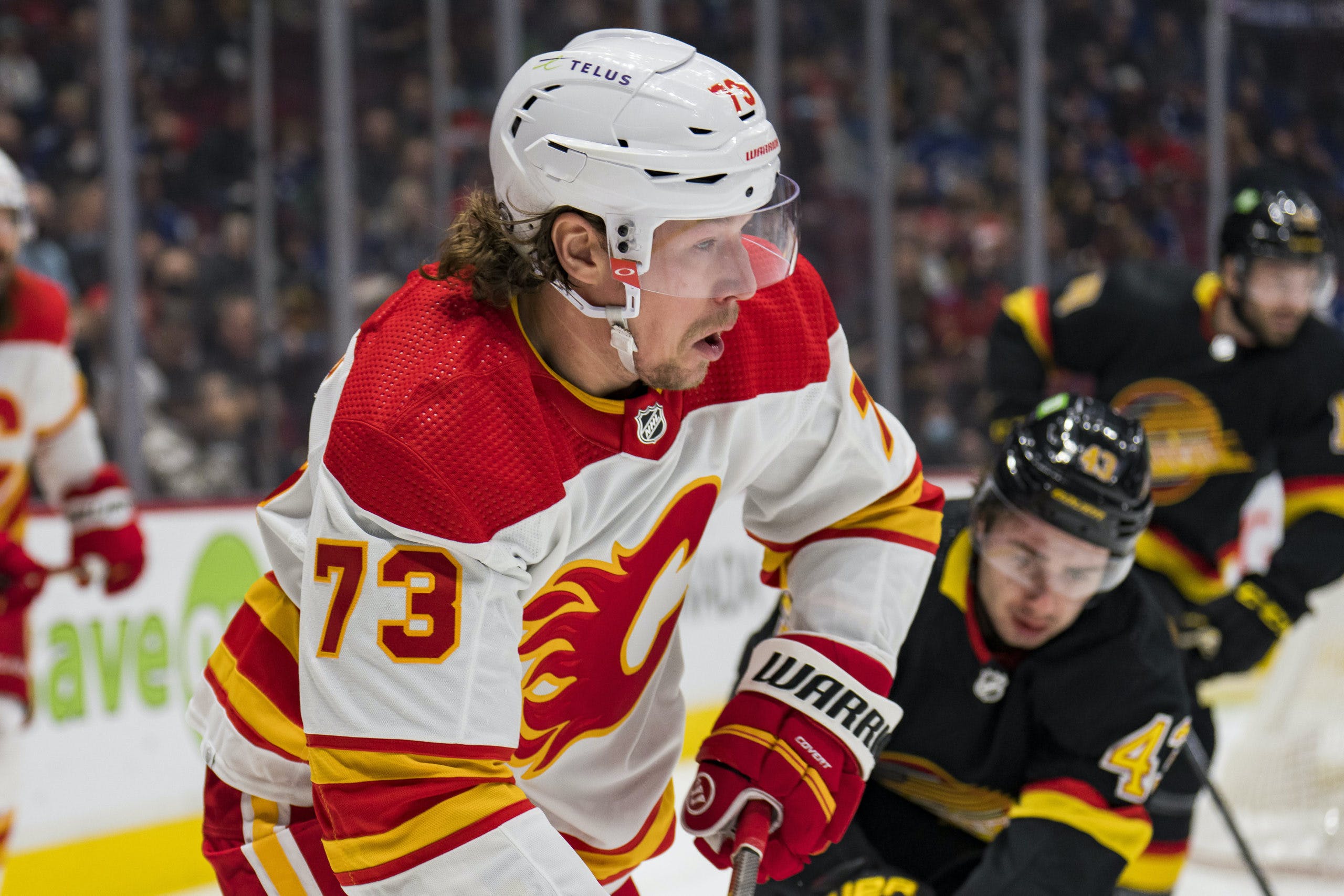 By Shane Stevenson
10 months ago
Welcome to one of the lowest event games of the year. No, it wasn’t Arizona vs Seattle, it was the Battle of Alberta and it played right into the Flames coaches’ hand. The Oilers were able to manage a whopping 5 high danger chances at 5v5 – for a team with two top 5 scorers in the entire league to be shutout that much, well in my eyes that’s a well-executed gameplan. The only downside is the unfortunate bounce that ruined Markstrom’s shutout he had running – it would have put him just one behind Kiprusoff for most ever in a Flames season. Unfortunately, that is just the reality of the randomness that can be hockey some nights.
CF% – 46.82%, SCF% – 43.46%, HDCF% – 16.53%, xGF% – 41.97%
It’s a Team Game – Why are the ratios so distorted you may ask, well it’s because not a lot happened in terms of chances tonight. In comparison there were 110 Corsi events in the Leafs vs Blue Jackets game last night (50:12 of 5v5) – Oilers vs Flames saw 67 Corsi events (40:21 of 5v5). To remind those that don’t know Corsi is any shot attempt made whether it was blocked, deflected, hit the net, post, or went in.  So, in 10 extra minutes of 5v5 play the Leafs/Jackets saw 43 more shot attempts – It really paints a picture of just how there was very little space out there for either team to make plays.
Corsi King – Rasmus Andersson (69.88 CF%) and Noah Hanifin (65.22%) saw the most shots attempted while they were deployed for Flames players. Johnny Gaudreau (61.65%) was just behind Hanifin and was tops amongst raw attempts for forwards. He really wanted to tuck away one of those goal line slappers tonight. Worth mentioning that the Flames new look middle six line designed for offence only saw 4 total attempts go against them while getting over 7 – led by Andrew Mangiapane (66.20%).
Corsi Clown – The Flames’ new look middle six line designed for defence all finished with bad ratios, but when we classify the danger levels of those chances later, you’ll see it’s not as bad as the numbers here would imply. Mikael Backlund (17.89%) and company got one offensive zone start and 5 defensive zone starts – it may ding the numbers some nights but it’s because him and his line have proven to be able to handle themselves back there and transition into an attack.
Taken By Chance – the high danger numbers here will all look bad but that’s because Gaudreau (69.65 SCF% // 32.68 HDCF%) had the only high danger chance for the Flames at 5v5 when he went on his breakaway. Remember all the other Flames breakaways came shorthanded and Toffoli’s (57.59% // NA) was ripped from above the hashmarks (so say the shot trackers anyway). Chris Tanev (24.55% // NA) and Oliver Kylington (24.55% // NA) got a steady diet of top competition and didn’t surrender any high danger chances. Now those two weren’t able to create any either, but they did the primary job of not letting a team with high scoring players get points.
xGF% – When the raw totals for overall chances are this low, I like to look for strange anomalies. The two players with the highest raw totals of xGA were Nikita Zadorov (30.09 xGF%) and Erik Gudbranson (28.16%). I mention them because I don’t believe they played bad at all, but the Oilers played some strong enough defence that the numbers get over skewed by lack of data. One game samples are more for one-off observations, multiple games strung together are more useful to aid in analyzing. Both teams came out and played a well-structured defensive game (yes, I’m crediting the Oilers there), but the Flames have been doing that for longer and with a deeper roster in regards to their depth lines. If Jay Woodcroft ever gets some quality depth pieces, he could whip Edmonton into shape – lots of defensive potential in that young Markus Niemelainen. Calgary pounced on the few mistakes the Oilers made and earn the two points.
Game Flow –

The part of the whole game that just felt wrong is how much life that random bounce goal gave the Oilers players. They were in fact pressing before that – i mean you can’t score at all if you aren’t in the attacking zone – but with how the rest of the game was going its reasonable to say i was doubtful Edmonton would score. After it got within one every time McDavid would take a quick step i was expecting a tying goal but Calgary responded well.
Game Score – Tyler Toffoli (2.53 game // 0.54 average) and his two goals lead the way for Calgary with Johnny Gaudreau (2.27 // 1.74 average) and his slick mitts behind him. Adam Ružička (1.47 // 0.61) made the most out of his 8 minutes in ice time and grabbed a primary assist. Jacob Markstrom (0.81 // 0.28) averaging a positive game score – which is very hard for goaltenders to obtain.
Shot Heatmap – 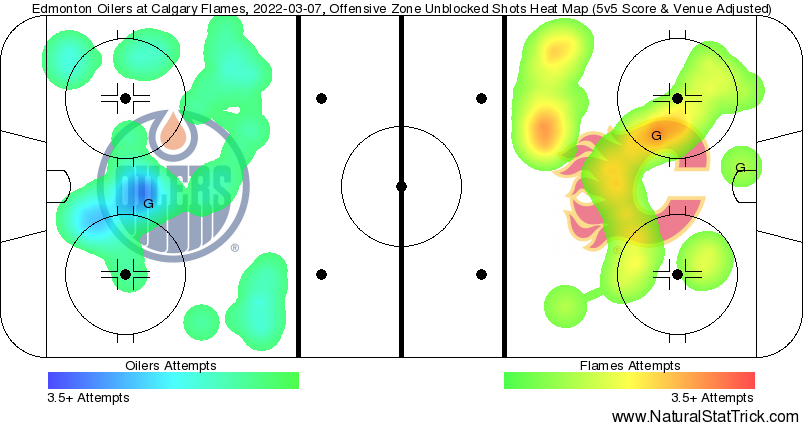 I think this is the saddest Flames heatmap I’ve seen all season and they won this game. You can’t beat the Oilers in a track meet game when they have McDavid – if they wanted to win they had to give up as little as possible. It helps when the opposing coach is trying to teach his team to play a similar style but they aren’t familiar with it completely yet. Anyways I’m very interested to see if the Flames can crease crash Washington Tuesday and try and expose their young goaltenders.
In The Crease – 1.40 expected goals against with only a high danger goal getting by him. Bad bounces happen in hockey and it was a great sign that the Flames didn’t crumble after seeing Devin Shore get a gimme goal on a freak play. Last year this almost same roster would have let that get to them and would have wound up losing, not anymore. Darryl has got the boys running hot and humble. Markstrom and his solid play in the BOA pushes EDM out of a playoff spot with no games in hand on the wild card teams. Heck, even Vancouver is just 2 points behind them with the same amount of games played. How did this get so off track when I was supposed to discuss goaltending? Oh well – keep slaying Markstrom.
Today’s Specials – Power play goals in this province aren’t usually the team wearing red’s forte – especially when they play each other – but this was Toffoli’s first one and he obviously missed that memo. Tkachuk’s between the legs goal counter still stands at 2 for this season, but he did try to go between the legs before Toffoli cleaned up the garbage in the crease. Also, how about that aggressive penalty kill not giving the Oilers skaters time to think with the puck. Any Oilers player that tried to go low on the PP when the puck was loose got a hard shoulder sent their way – quality special teams was a major factor in this particular victory.
Player Spotlight – Rasmus Andersson – No Flames player logs more minutes than Razz. Tonight he was at 22:36 a clear 3 minutes ahead of his partner Noah Hanifin. He kills penalties, QBs the Flames top powerplay unit, and gets to face some high-quality NHL competition on a nightly basis. Andersson may have had a down COVID year but he’s having one hell of a bounce back 2021-22. Remember he’s signed long term at under $5 million – looking like a bargain the way he’s played to date this year.
Flashalytic’s 3 Stars –
1) Tyler Toffoli
2) Johnny Gaudreau
3) Rasmus Andersson
The Flames are back at it tonight against the Washington Capitals in Calgary, 7 p.m. MT puck drop.
(Stats compiled from Naturalstattrick.com // Game Score from Hockeystatcards.com)