Beyond the boxscore: Calgary Flames leap into top spot in West with win over Chicago 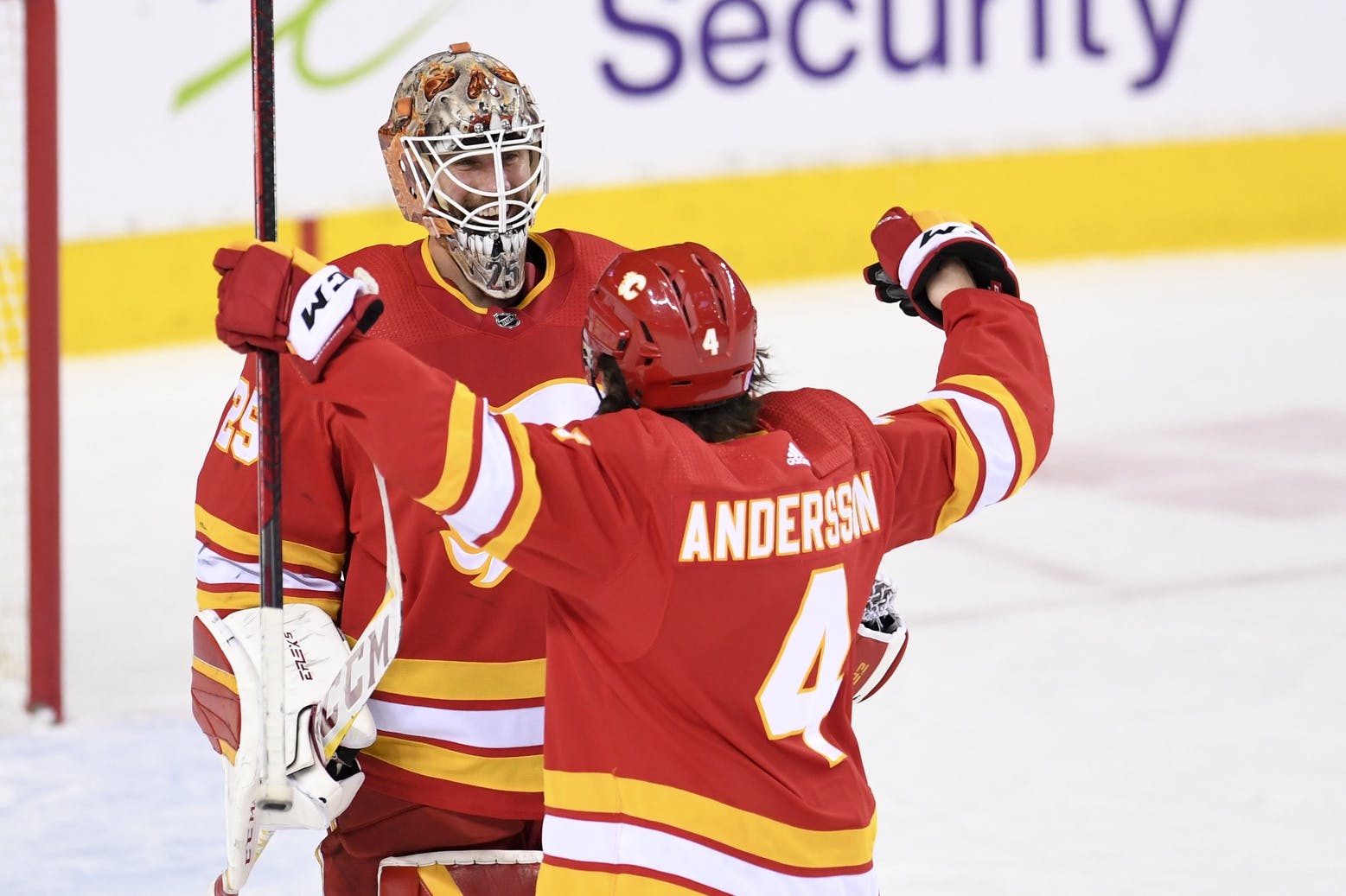 By Shane Stevenson
1 year ago
Top spot in the Western Conference after extending their winning streak to four games – the Calgary Flames are back rolling. Not the smoothest of executions, but one that worked when they needed it too. There were times when Chicago’s top line looked dangerous – Patrick Kane is a hard player to contain at times – but they did and take away the two points.
CF% – 60.74%, SCF% – 63.9%, HDCF% – 62.83%, xGF% – 66.58%
It’s a Team Game – A strong start with a real strong finish, not the way you would have scripted this for Calgary. We talked about excuses last game, and there were still some that could have possibly lingered into this one, but the Flames don’t care for them. Three days of rest follow this after a 5-0-1 stretch in their last 6. Oh, we didn’t mention that earlier? Point streak watch version 2.0 is back and it’s at 6.
Corsi King – King of the Corsi, duke of the west iceplex, and Swedish draftee of the Flames Rasmus Andersson (73.69 CF%), claim your crown good sir. Dillon Dubé (71.63%) and twitters favorite punching-bag Tyler Pitlick (70.85%) round out the top 3. See this is another one of those “everybody did good” games. I have one very specific bone to pick, but that’s not for the positive section that saw players like Sean Monahan (67.06%) and Nikita Zadorov (65.43%) post positive results.
Corsi Clown – One line did get buried twice by the Blackhawks big line of Debrincat-Dach-Kane and that was Trevor Lewis (47.44%), Brad Richardson (47.61%), and Milan Lucic (49.37%). Now that’s a blatant mismatch that wasn’t intentional by Calgary, but man was it a nightmare as the Hawks flung the puck around the zone for 90 seconds. In a game that was 2-2 it just made the suspense worse. I was just waiting for the “of course” moment where the other team scores despite Calgary playing better, but this isn’t that team anymore. We need to remember this team is learning how to close out games – something that helps during spring hockey. That being said – the chances Chicago were able to muster out of those two instances were next to nothing, the slot stayed defended the whole time.
Taken By Chance – The fourth line was stuck out there, but so were Zadorov (68.47 SCF% // 46.74 HDCF%) and Gudbranson (56.41% // 22.63%). Which added to the overall experience of blanket anxiety. Overall, I really enjoyed most of everyone’s game, but these two specific shifts stood out as the two times Calgary struggled. Dillon Dubé (60.87% // 100%), Tyler Pitlick (60.87% // 100%), and Sean Monahan (60.87% // 100%) allowed no high danger opportunities against tonight. The most was Noah Hanifin (74.73% // 57.99%) who created 6 chances while allowing 4 against. He did that away from Andersson (81.67% // 73.70%) because Andersson only surrendered two.
xGF% – It’s just a very Razz review – Andersson (81.67 xGF%) unsurprisingly fits on top here as well. Elias Lindholm (78.99%), Matthew Tkachuk (75.71%), and Johnny Gaudreau (75.37%) also finished above 70%. The lowest positive ratios on the team came from Oliver Kylington (56.53%) and Chris Tanev (55.52%). Again – Calgary really did dominate the Hawks in many aspects. Those slight miscues against the fourth line really paint a bad light on how well the top 9 and top 4 defensive pairs executed their gameplan in this.
Game Flow –

You see that dip towards Chicago in the middle of the second and then middle of the third? Those were the shifts Kane got to skate around the fourth line like he was practising. The rest of the game was decisively in Calgary’s favour. The really early goal Dubé luckily scored on Fleury helped allow the Flames to play from in front (or tied) the whole game.
Game Score – He led everything else tonight, Rasmus Andersson (4.87 game // 1.16 average) may as well lead here tonight. Andersson’s 4.87 wasn’t just the best of the game – it was the best across all 3 games in the league tonight ahead of Steven Stamkos and John Klingberg. Noah Hanifin (3.60 // 1.02) cashed in on that too with Elias Lindholm (2.36 // 1.58) and Johnny Gaudreau (2.36 // 1.74) also ranking above 2.00. Nobody on the Flames through 20 games is averaging a negative game score impact.
Shot Heatmap – 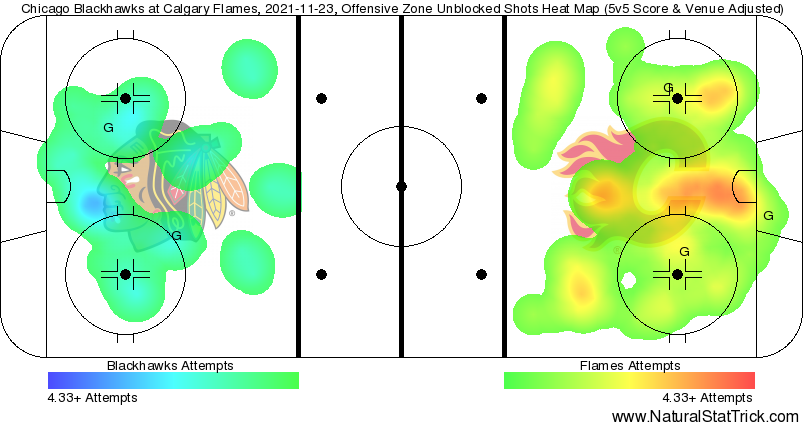 The Hawks map looks as almost desolate as the Bruins one from Sunday. The Flames shot the puck from all over the ice after Fleury let in a weak one early, but still made it a priority to drive the crease. Matthew Tkachuk and Andrew Mangiapane are the ones with a specific knack for getting the rubber puck to the blue paint, and they’ve found success in doing so.
In The Crease – A rare occurrence this season for Markström where he probably wanted not one goal back but both of them. The giveaway for the second was on him, it is what it is mistakes happen. The Hagel goal is one though, that I would not classify as particularly dangerous. The only player in Markström’s vision was big Zadorov (who was playing too deep on his coverage) and Hagel let it go from the top of the circles. Flames win despite an off-night for their starter, an extra big W for that. 1.21 expected goals against, .905 5v5 SV%, with 2 medium danger goals against.
Today’s Specials – I know those in Oil country are complaining about penalties but how about Calgary? They didn’t see the power play once tonight. Chicago got the only power play which was killed by the Flames power-kill unit and then everyone played like ol’ buddies apparently. No cheeky hooking calls, bad roughings, or momentum lost. The lack of calls really catered to Calgary’s favour as they are the best 5v5 team in hockey though so, lips are sealed from me.
Player Spotlight – Nikita Zadorov – I understand wanting to have a big performance against the team that just traded you away, but you did not have to make it so obvious. The neutral zone carries ending in offsides, getting caught pinching and being the only defender to allow multiple odd-man rushes tonight, as well as being way too low in the zone on the Hagel goal – he drifted below the goal line instead of manning out front – all made me tilt my head and audible “why?” It wasn’t that it appeared he didn’t care, on the contrary, he cared way too much and it ended up with him out of position or hemmed in his own zone way too much. I was critical of Richardson last week and now it’s Zad’s turn, the numbers from Tuesday may be on his side but sometimes good teammates can carry you to good numbers – Zadorov had some galaxy brain moments in this contest.
Flashalytic’s 3 Stars –
1) Rasmus Andersson
2) Matthew Tkachuk
3) Dillon Dubé
The Flames (and myself) will take three days off before returning at home against the Winnipeg Jets Saturday night – covered right here at FlamesNation.
(Stats compiled from Naturalstattrick.com // Game Score from Hockeystatcards.com)
Uncategorized
Recent articles from Shane Stevenson