Beyond the Boxscore: Calgary Flames let one slip away against the Winnipeg Jets By Shane Stevenson
1 year ago
That game was within Calgary’s reach and for the majority of the third period I thought Calgary was going to win. They were dominating the Jets, playing for long stretches of time within the Jets zone, forcing Hellebuyck to make some good saves multiple times, but failed to actually score. When the Jets’ goal machine – Kyle Connor – got clear time and space to take a shot he didn’t waste it and Calgary lets Winnipeg off their five-game skid.
CF% – 65.68%, SCF% – 63.18%, HDCF% – 65.95%, xGF% – 62.04%
It’s a Team Game – Darryl Sutter post-game said the team just didn’t score on their chances – and as usual he’s completely right. At 5v5 tonight the Flames as a team doubled the Jets in high danger chances (12 – 6). By xG metrics the strongest start was the first period (1.24 xGF), and defensively they were proficient never allowing more than 0.48 xG in any given period.
Corsi King – Today’s top Flame was Johnny Gaudreau (79.55 CF%) and his shotgun riders Elias Lindholm (77.90%) and Matthew Tkachuk (79.30%). Whenever the trio hit the ice the puck seemed to automatically travel to the Jets end. The chemistry between Johnny and Tkachuk is reaching new levels right before our eyes – an absolute treat to watch every single night.
Corsi Clown – Milan Lucic (26.60%) was not having himself a particularly strong game before he committed a board on Dylan DeMelo of the Jets. The refs gave him five and a game, Sutter said it was a two minute boarding penalty, I’ll let everyone reading this debate the topic in the comments. The fourth line had some struggles tonight and haven’t played great possessive hockey of late.
Taken By Chance – He goes up and down as the season progresses, Dillon Dubé (23.55 SCF% // 0 HDCF%) was not good at creating offence in this one. He only allowed one high danger chance but failed to generate one himself. He’s been moved off the power play in favour of Blake Coleman (76.87% // 65.37%) and is now on a line with Sean Monahan (36.41% // 39.11%). Some not-so-positive trends for himself in terms of total ice-time too – here’s hoping he can go on a good run soon.
xGF% – Noah Hanifin (74.78 xGF%) and Rasmus Andersson (73.53%) with another strong performance in consecutive games now. Mikael Backlund (72.12%) also finished with a strong ratio himself. I gave Nikita Zadorov (58.92%) some grief for being lost on the Jets second goal, but he finished with an overall better ratio than I would have given him normally. The Flames entire team basically prints xG with the way they play every night (it means they’re quite good at always getting more/better quality shots than their opponent), so I have zero concern about them bouncing back in the next game. Even tonight after the Connor go-ahead goal the players never gave up – kept pressing right until the final horn blew.
Game Flow –

The Jets really only had three slight pushbacks towards the Flames constant build of momentum, and they scored on two of them. For the most part play was dictated 5v5 by the Flames and this one should’ve been theirs to win, but it doesn’t always happen that way in hockey.
Game Score – Believe it or not the player with the best score in the game – for either team – was Johnny Gaudreau (2.28 game // 1.76 average). His two assists and his 5v5 overall play had him rank against both Kyle Connor and Connor Hellebuyck. For that to happen Gaudreau had to play a dominant offensive game in terms of chance creation – the evidence for his success in doing that was both visible and is quantified in the numbers. Specifically, the Jets D pair of Morrissey and Schmidt got buried In their own zone – but Hellebuyck bailed them out.
Shot Heatmap – 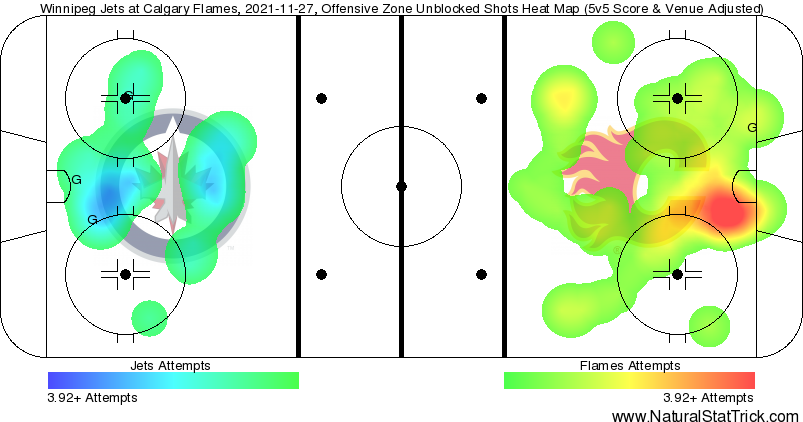 Calgary got chances from in tight on the crease like they normally do, but only on the right side of the net. Uncommon for them to not have the entire goalmouth surround with volume and instead just two-thirds of the net. They also – when they allowed chances – allowed them from the middle of the ice tonight. Winnipeg made a priority out of charging the net front after losing 5 in a row and it paid off for them getting some bounces falling their way.
In The Crease – Kyle Connor’s goal was a rocket that Markström had to quickly slide over in transition to do – not as easy as it is to simply say. He may want some of it back, but players like Connor also have a little something extra in terms of their finishing ability at the NHL level. You don’t score at a 30-goal pace in the NHL for 5 straight years without having a little something extra to your shot. As for the two high danger goals against the first one was a nice play by the attacker, and the second one he was hung out to dry by his own defender. 1.30 expected goals against, 2 high danger goals and one low danger goal got by him for a 0.833 5v5 SV%.
Today’s Specials – I hardly got the opportunity to view the unit on their first opportunity – they scored so fast I didn’t have time to blink. If they win the draw they usually set up very well and are dangerous, if the other team breaks them up then they struggle to break-in more often than not. The penalty kill is operating at the peak level I’ve ever seen any NHL unit play at. They give up hardly any high danger chances on their PKs while also staying a threat to go towards the other end for a shorthanded chance.
Player Spotlight – Tyler Pitlick – This is one player in the roster I maybe want more out of but should not absolutely expect more out of. In the season preview I discussed his defensive merit, which when with Backlund and Coleman was working well, but also mentioned his lack of history of creating offence. As we can see over his career chart below, never once in his career has he ever contributed in a + manner to creating offence, but for six of eight years (and the last 4 in a row) he’s been great at limiting chances in his own zone (+ on top rink is good, – value on lower rink is good). He’s been miscast out of his element right now, but neither Lewis nor Richardson have a good profile that would succeed in that 3RW spot either. Pitlick is a fine NHL fourth line player, but for Calgary to really shore up some of their holes that position does need to be addressed.