Beyond the Boxscore: Calgary Flames pepper Coyotes with shots, win 4-2 By Shane Stevenson
9 months ago
The first period should have ended 5-0, but Arizona goaltender Karel Vejmelka was sharp. The Coyotes got a bit better after the second period started, but Calgary dictated the flow of this one with regularity. It was still only a one goal game as the third period got underway, but Blake Coleman unleashed his fury after Lawson Crouse (and the refs) made him angry. He laid maybe the biggest check from a forward not named Lucic this year before making an exceptional tip to gain a goal of insurance. Flames do head into the All-Star break with three straight wins.
CF% – 66.91%, SCF% – 68.47%, HDCF% – 63.02%, xGF% – 68.86%
It’s a Team Game – The numbers show another game where Calgary bullied their opponent, but it didn’t feel that way. Arizona finding those two goals – combined with a great performance by their goaltender – made the game feel closer than it ever really was. While the Coyotes may have been a bounce away Calgary was able to play strong enough defence to walk away victorious. They also got a fair bit lucky seeing as the Coyotes missed some glorious opportunities – still some things to work on.
Corsi King – Mikael Backlund (88.86 CF%) leads the way – after the first period every single player was destined to finish well here. A reminder that Corsi is all attempts towards the net whether the puck was counted as a shot, hit the post, got blocked, or deflected away. You take all the attempts one player got for themselves and divide that by the total of all chances for or against that the player was on the ice for (Corsi for + Corsi against = total). So while 26 shots made contact with the goalie or the mesh there were still PLENTY of shots that missed the net. Like I said, every single player was destined for a good percentage after the first period.
Corsi Clown – All that above to explain – Kings only, nobody with a significantly bad ratio at 5v5 SVA (via NaturalStatTrick).
Taken By Chance – There is the issue of Rasmus Andersson (61.54 SCF% // 38.13% HDCF%) and Noah Hanifin (56.79% // 38.13%) getting fooled a fair amount by Clayton Keller (44.44% // 62.50%) and his line. Arizona management may not be trying very hard to compete, but Keller is still a good player who can be dangerous with the right linemates. With the most involvement in high danger chances of anyone tonight Oliver Kylington (73.21% // 71.05%) and Chris Tanev (66.80% // 71.05%) come out as the co-winners. They’ve been rock solid during this 3-game stretch.
xGF% – Andrew Mangiapane (87.95 xGF%) not doing his Cy Young run any favours with 2 assists. From 20-5 to 20-7 how dare he. Blake Coleman (87.95%) had his first 2-goal game as a Flame after coming close in Dallas last night. These two guys providing consistent secondary offence is key for the Flames chances of possibly going past a round in the playoffs (should they get there). If they can stem the tide until the trade deadline the GM has an opportunity to afford a real good second line C but remember folks, he can’t just do that today. They need to accrue cap space to do this – clamouring for a trade today isn’t going to help this cause. Patience for the trade deadline, the team as constructed is still winning plenty of games.
Game Flow –

Arizona was able to keep the chances kind of even to start the second before tailing off. The same thing to start the third period for the first 7 minutes. Calgary was too relentless – and just better structured all around – in their efforts in this one.
Game Score – Chris Tanev (7.20 game // 0.93 average) was the man of the night gathering 4 points while playing his usual strong brand of defensive hockey. He has fit like an absolute glove into this roster, with his consistency being the best aspect of his game. Oliver Kylington (5.38 // 1.06), Blake Coleman (5.25 // 0.64), Andrew Mangiapane (4.10 // 0.93), and Mikael Backlund (3.20 // 0.59) were all the players to finish above a score of 2.00.
Shot Heatmap – 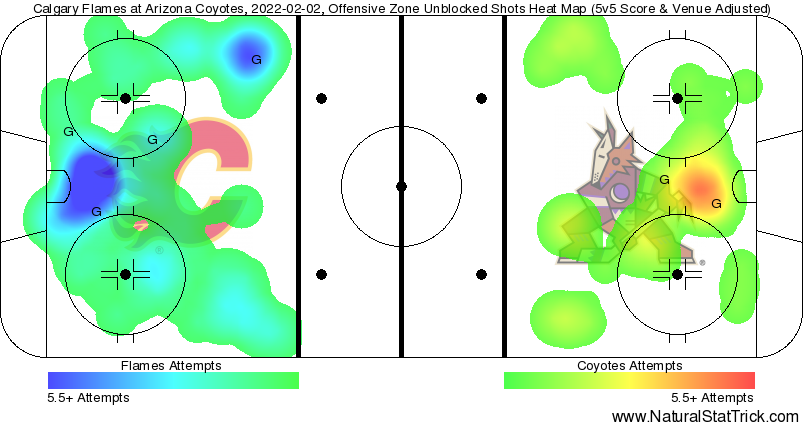 Vejmelka faced 4.45 expected goals against at 5v5 and none of the goals that beat him were classified as low-danger. He was able to deny Elias Lindholm from the slot 3 times in the first before Lindholm beat him late in the first. It would be a polite thing if next time the Coyotes played the Flames they could start a different goalie.
In The Crease – I don’t have any harsh criticisms of Jacob Markstrom. It’s almost near impossible to stop deflections that happen like Galchenyuk’s, and the Keller goal was a collapse in defensive coverage. He was sharper than you would have thought because whenever the Coyotes did get a chance it was dangerous. 2.39 expected goals against with a high danger and medium danger goal getting by him. A 5v5 SV% of 0.920%
Today’s Specials – There was a clutch penalty kill in the last 2 minutes of the game. If Arizona had scored early on that power play they could have pulled to within 1 with more than a minute on the clock. Instead the PK unit was clutch like they usually are and helped coast the game to the end. Power play had a perfect zone entry too (first unit) which almost brought a tear to my eye, more of that please.
Player Spotlight – Milan Lucic – Normally a career night gets you here (I see you Tanev), but I gave him a piece in the game score section. I want to talk about how Lucic adjusts his game when he’s playing with younger players. He’s a pace setter when he’s been out there with Dubé or Ružička. It’s like he feeds off the energy of their youth and elevates his game to a level that helps them play better – faster – hockey. I know Dubé hasn’t got very many good bounces, but he was still creating chances with Lucic – and now Ružička is getting those too.
Flashalytic’s 3 Stars –
1) Chris Tanev
2) Johnny Gaudreau
3) Blake Coleman
The Flames will take a nice little All-Star break before returning next Wednesday with a good test against the Vegas Golden Knights to kick off a 7-game homestand.
(Stats compiled from Naturalstattrick.com // Game Score from Hockeystatcards.com)