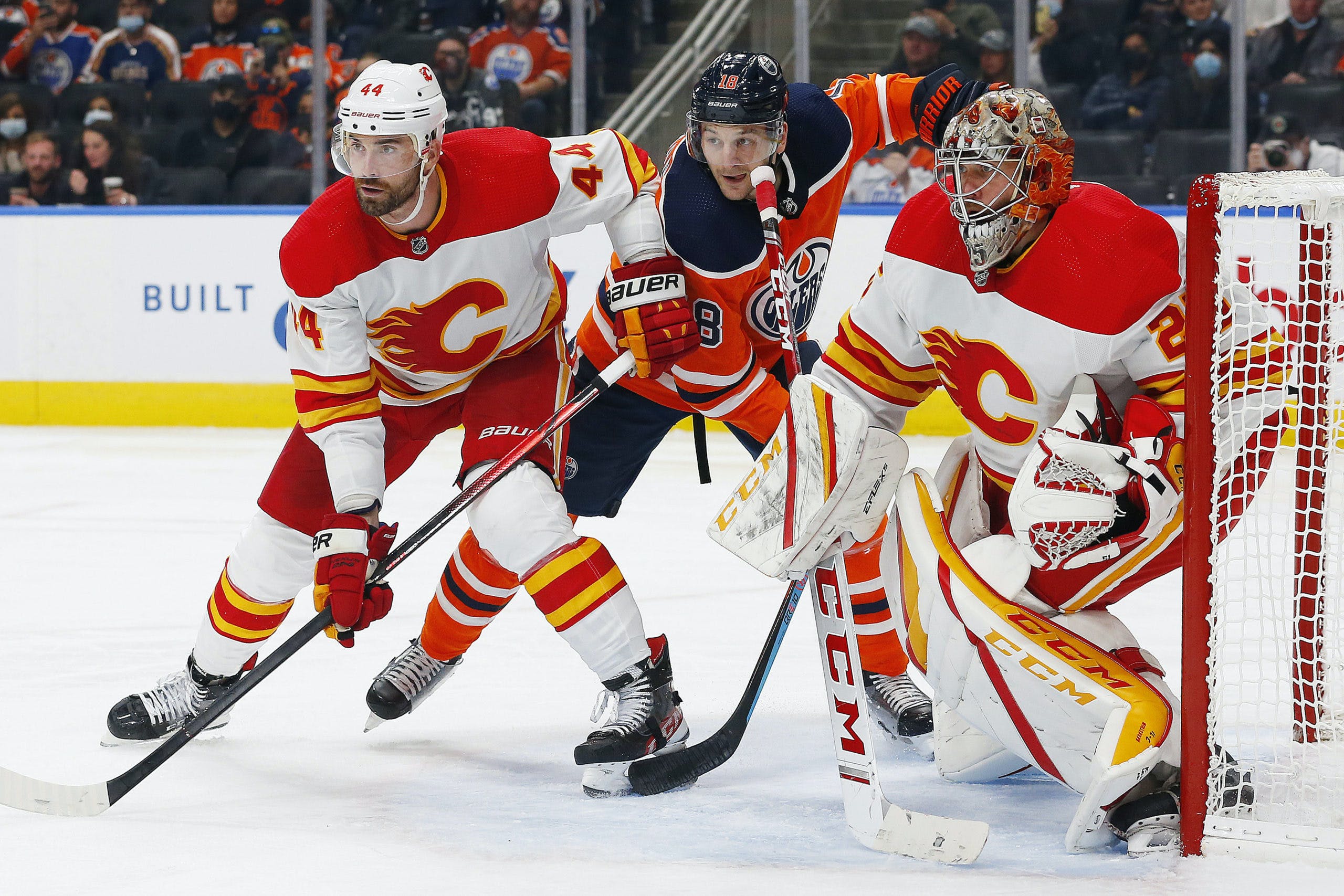 By Shane Stevenson
10 months ago
Tell me if you’ve heard this story before: Flames play stronger at 5v5 but falter against Oilers because the Edmonton power play goes off? You should have – it’s a direct echo of the first game of the season. Same story played out in both games, except Calgary controlled play for even more time in this one. The Oilers – whose biggest problem is goaltending – won because of goaltending. Oh, the irony.
CF% – 60.32%, SCF% – 63.55%, HDCF% – 75.36%, xGF% – 66.19%
It’s a Team Game – Team played well together. They did, that’s the only way to describe it. Dominant numbers across the board – they got the majority of scoring chances, high danger chances, overall attempts, and quality of attempts. The Perlini goal really hurt, any goal from that far out stings. After that goal went in Calgary did respond heavily with quality chances. The Flames definitely deserved that one extra bounce in this one, but in hockey that’s just how it goes sometimes. Take the positives and move to the next game.
Corsi King – Sean Monahan (69.38 CF%) fed off the Oilers weak depth but couldn’t convert anything into goals. He did have an amazing pass to Dubé (66.85%) for a wicked one-timer, but unfortunately Koskinen made a great save. Noah Hanifin (68.44%) had himself a great game as did players from the top 3 forward lines – such as Elias Lindholm (62.97%) and Mikael Backlund (56.23%)
Corsi Clown – Only one-line lost their matchups and their 5v5 ice time reflected a recognition from the coach on how strong they were playing. All playing at least under 7:30 Brett Ritchie (49.25%) and co. were the low men. Brad Richardson (40.03%) specifically struggled. If those are two-thirds of the lowest ranked players on your team it’s another sign of strong teamwide play.
Taken By Chance – The Flames did an overall great job at limiting 5v5 high danger chances, but that doesn’t help if a medium danger attempt (Perlini) goes in. The Dubé (76.93 SCF% // 100 HDCF%) – Lucic (81.61% // 100%) – and Monahan (81.61% // 100%) line did not surrender a high danger chance against… guess who the goal ended up being scored on? The Blasty Bros (and Sean) ended up being the top line in this entire game in terms of dictating which direction the play went in. Final +/- for them would be -1, this is why many have issues with the using that statistic as a serious measuring stick for play. It’s not completely irrelevant, but it doesn’t mean as much as some may say.
xGF% – Monahan and Lucic lead the way here with Johnny Gaudreau (78.41 xGF%) and Matthew Tkachuk (78.41%) in a tie for third place. Calgary had 18 players skate, 15/18 finished with expected goals ratios over 60%. All three defence pairs were above 60% and the only line to finish below was that of Blake Coleman’s (32.95%). Oh you thought because of the low corsi the bottom line might be the low guys here? No, those fourth line guys may generate no offence, but they do know how to play in their own zone. A luxury sometimes forgotten in the pursuit of scoring depth. (Don’t take that wrong – scoring depth would most certainly be welcomed.)
Game Flow –

Calgary just kept pressuring Edmonton all night. Koskinen looked good at times and lucky some others as Calgary missed the net in the first period in some odd ways. Controversial situations on the 4th goal, it is true if Kylington doesn’t go down there he would have driven to his position defending the netfront – and would have been directly in Draisaitl’s pathway. Oh what could have been, but it wasn’t.
Game Score – 8 of the top 10 scores in this belong to the Flames – who claimed zero points. Noah Hanifin (4.31 game // 0.73 average) with his best performance of the season, and Matthew Tkachuk (3.75 // 1.54) extending his goal streak to 4 straight games. Other Flames above a score of 2.00 were Johnny Gaudreau (3.06 // 1.61), Rasmus Andersson (2.71 // 0.80), and Elias Lindholm (2.04 // 1.29).
Shot Heatmap – 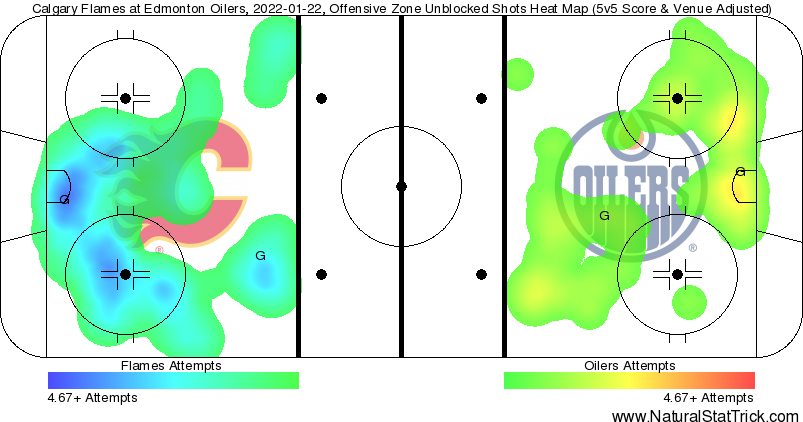 I mean, the lack of attempts from in-tight alone should have been enough for Calgary to take this one home. I wouldn’t change the gameplan one bit. In all honesty they deserved the win, really they did, but it doesn’t always work like that in hockey.
In The Crease – Markström played great in tight and had his angles down at his same old high level of skill. The vision tonight was the issue, having trouble seeing the puck through traffic. I try not to blame goalies for PK goals against unless blatantly obvious, but the Perlini goal from far out was one they needed in a 1 goal game. Calgary did put offence on the board, just couldn’t get that one extra save they needed. Brush it off, we move on.
Today’s Specials – It doesn’t always have to be McDavid that scores the power play goals. He was directly involved in the speedy puck movement that took place just before each Bouch bomb from the point though – still finding ways to constantly hurt Flames fans. You cannot take a single penalty against the Oilers, no matter what kind of recent history their record states.
Player Spotlight – Noah Hanifin – A player we don’t talk about much lately which is both a good and bad thing. Hanifin has the potential to be a tremendous offensive player, but he hasn’t been able to put up high point totals. Nights like tonight where he makes crisp passes and finds ways to put pucks on net from within the circles showcase his top end talent. Great passing vision, ever increasing chemistry with Rasmus Andersson, and the ability to contribute in big ways some nights. It’s a good thing Hanifin plays for the Flames – a good quality player.
Flashalytic’s 3 Stars –
1) Noah Hanifin
2) Matthew Tkachuk
3) Sean Monahan
The Flames season will continue their schedule on Monday against the St. Louis Blues. From now on there’s not going to be any time to dwell on losses or celebrate wins – the condensed revised schedule begins now.
(Stats compiled from Naturalstattrick.com // Game Score from Hockeystatcards.com)