Beyond the Boxscore: Calgary Flames respond in a big way, pummel injury-ridden Blues. 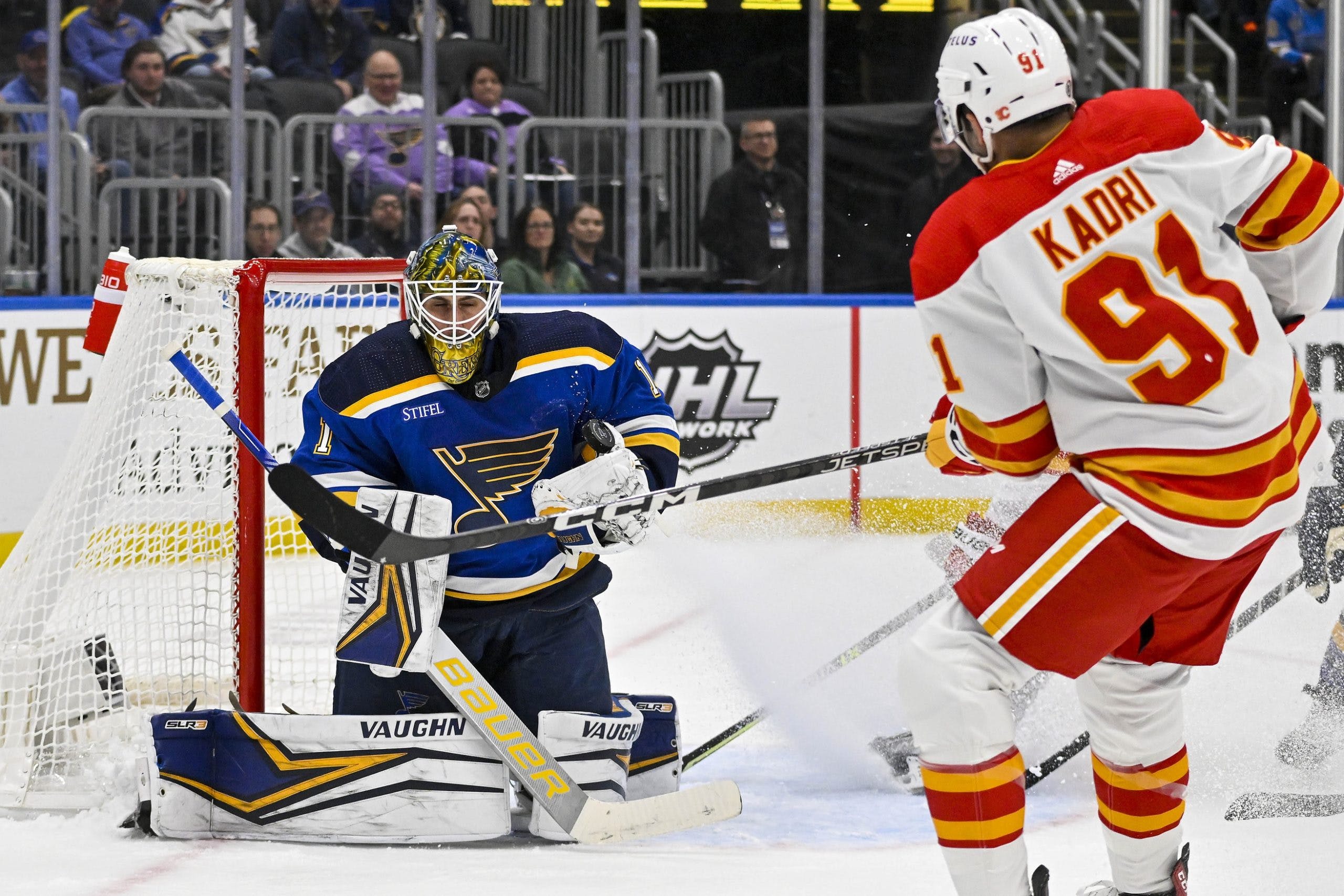 By Shane Stevenson
21 days ago
From the moment the puck dropped the Calgary Flames pushed the St. Louis Blues back into their own zone in what is one of the most complete performances this roster has achieved this year. A fantastic win where the Flames prioritized chances from the circles or lower – doing the one thing they had struggled to accomplish to date this year. The Blues only ever got quick strike chances – outside of their power plays all their high-quality opportunities came off the rush or a wide drive to the net. This game felt like one you would have watched the team play last year – a welcome sign with 39 games to go.
CF% – 65.12%, SCF% – 63.12%, HDCF% – 75.11%, xGF% – 64.68%
It’s a Team Game – The single biggest thing that made this game stand out was Calgary getting 14 high danger chances and only giving up 5. Usually when they get over 10, they’ve been giving up almost that much too. Another positive is both times Calgary had to play back-to-back games in a road city this year they pummelled in the second match. I’ve been screaming in these reviews for them to get to the crease for chances and I finally saw what I wanted to see. Pure joy from watching that game as a fan, excitement watching it from an analyst perspective.
Corsi King – What a turnaround for Elias Lindholm (80.55%) who had less then 10% in xG after Tuesday’s OT loss. Easily in contention for player of the game – I’d normally highlight a bounce back like that in player spotlight, but someone put South Dakota on the hockey map tonight. Lindholm was able to find Dubé (74.37%) in open space a few times with assistance from Tyler Toffoli (77.55%) and his great board play/forecheck. I said I wasn’t worried about them and they showed why tonight. Weegar (77.40%) recovered from a rough first 10 minutes – a luxury that can happen because you play with Chris Tanev (78.11%).
Corsi Clown – Only one player saw more chances against – not sure if it’s because of ending PKs but that’s just an initial guess – Trevor Lewis (42.23%). Linemates Walker Duehr (52.21%) and Adam Ružička (54.68%) showed great chemistry on their board work in this game. I mentioned on FlamesNation Radio (our podcast – weekly episodes on the FlamesNation Youtube page and/or Spotify) this week that if you want to take anybody out for a game to get Pelletier some reps why not give almost 36-year-old Trevor Lewis a night off. It wouldn’t be a punishment for playing bad – just a recognition that he ain’t 24 anymore and one or two games giving your body a break won’t kill you. Lindholm, Toffoli, Dubé, Mangiapane, Backlund, and Coleman all kill penalties too – it could work.
Under Pressure – 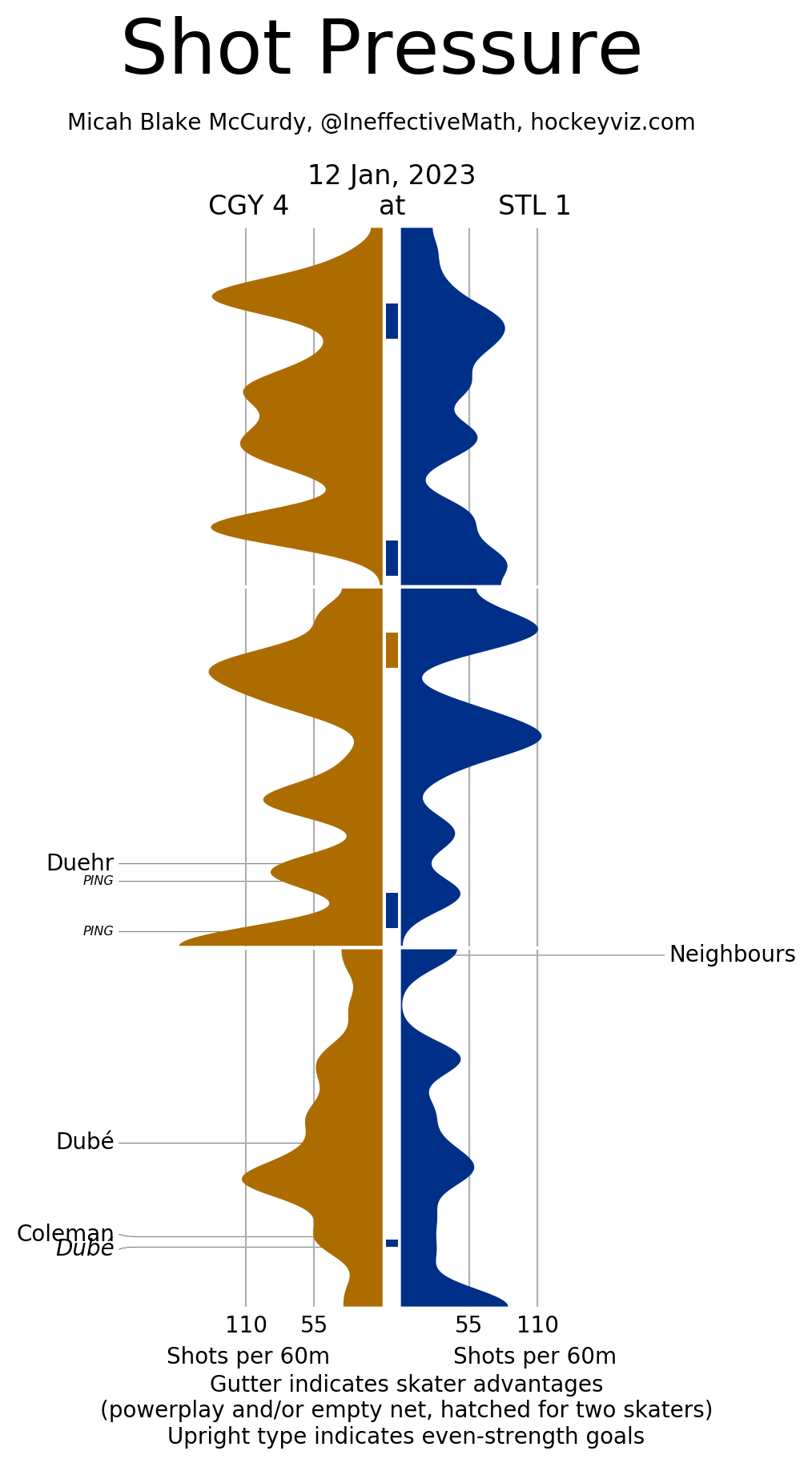 Taken By Chance – I should mention at least somewhere about how injured the Blues are, but the fact that they beat Calgary two days prior makes me just want to rave. Always have to bring ourselves back to reality and recognize this isn’t a) the best the Blues had to offer or b) a team functioning like a playoff team halfway through the season. Okay I got that out of the way let’s get back to the fun stuff. Five players were on the ice for over five high danger chances each. Noah Hanifin (55.50 SCF% // 85.19 HDCF%) gets the virtual crown for also being out there for all three 5v5 goals, but Blake Coleman (63.92% // 74.57%), Nikita Zadorov (65.79% // 70.01%), Andrew Mangiapane (61.86% // 66.16%) and Rasmus Andersson (50.45% // 65.73%) round out that club. Zadorov was involved in the most raw chances, but as you can see Hanifin had more success in limiting his chances against for a higher ratio.
xG Breakdown – 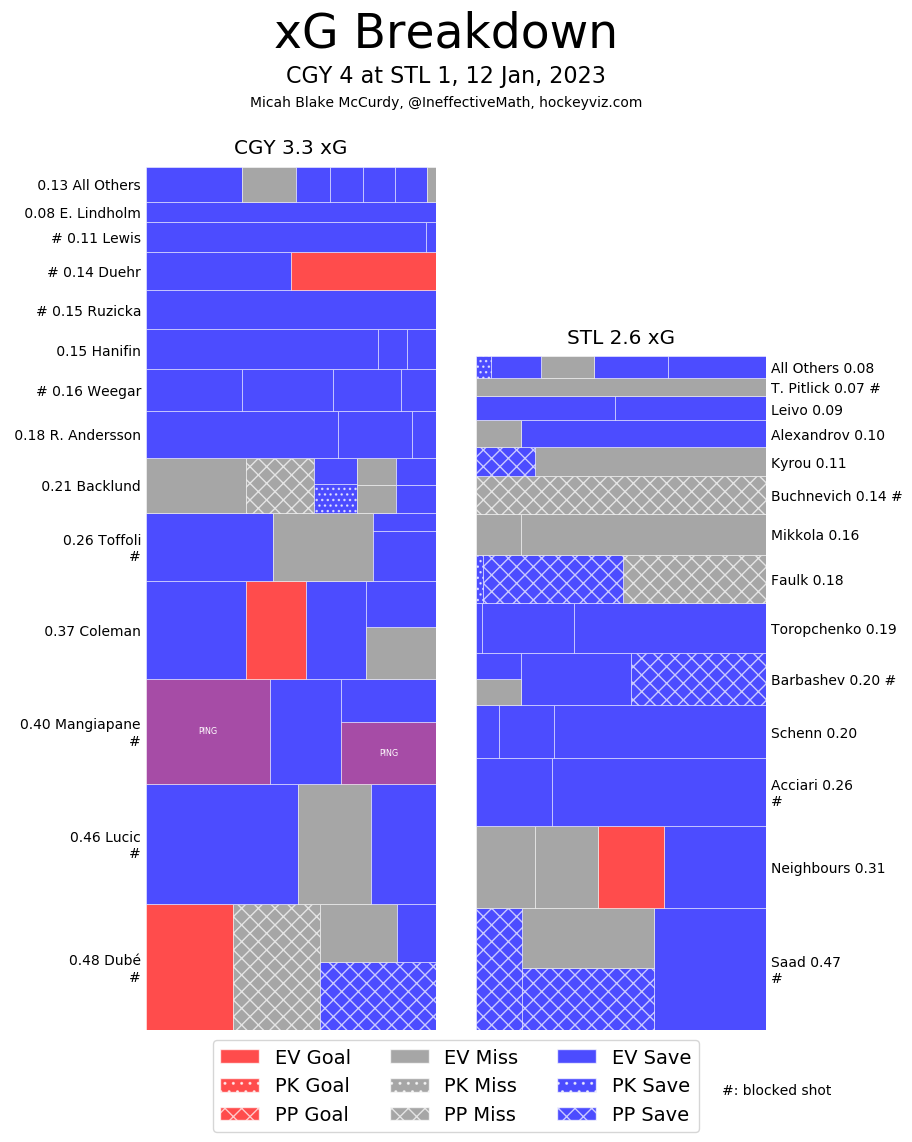 xGF% – Elias Lindholm (89.09 xGF%) led the way but I feel I should highlight some guys that were not mentioned earlier. Milan Lucic (68.77%) had his fourth straight noticeably positive game next to Huberdeau (61.63%) and Kadri (68.42%). That line is working right now – again it should only be broken up after a stretch of bad play. Everyone should fully expect another appearance against Dallas Saturday. It’s also to the point where one bad game isn’t enough to split them up – they’ve shown success and results, what more can you ask for? Backlund (54.43%), Coleman (57.32%), and Mangiapane (64.78%) were good again – also ice is made of frozen water in case you were wondering.
Game Flow – 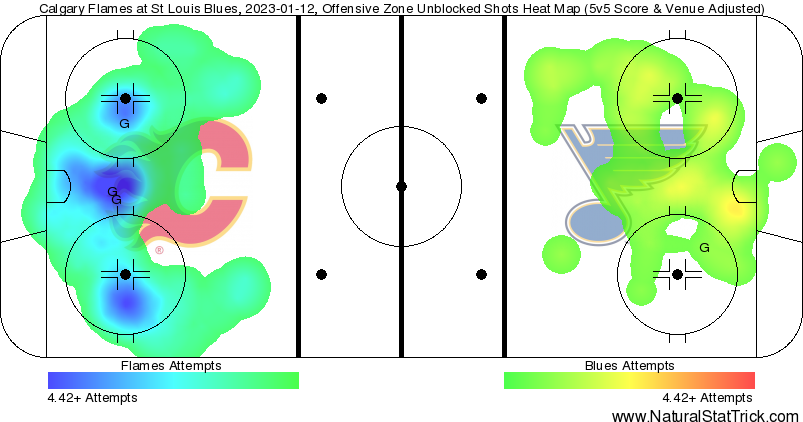 Would you just look at that beautiful heatmap right there. This is what I clamour for every single review and to see it visually represented is pure satisfaction. Goals aren’t as hard to come by when you prioritize your shot location. Blues couldn’t defend worth a damn, but Calgary didn’t play down to that they took advantage of it.
In The Crease – I didn’t realize this until friend of the program Pat Steinberg tweeted it after the game but Vladar has a 6-0-3 record in his last nine games. How did he not start for two weeks? I would be feeding a guy on a run like that as many starts as I could. Tonight, he only saw 1.85 expected goals against at 5v5 with the one medium danger chance getting by him. I’m not going to be shocked if we see Markstrom against Dallas after he out duelled Oettinger in the playoffs last year, but I think regardless we need to see Vladar one more time on this road trip.
Player Spotlight – Walker Duehr – I am so happy for the guy to get his first NHL goal, he was grinning ear to ear after the game in all the pictures I saw.
Two very solid showings next to Ružička making smart simple plays to keep possession alive or just getting the puck deep. He didn’t try anything fancy on his goal just found some space and took a quick shot. Simple is what the Flames need sometimes and they’ve missed it a bit ever since Brett Ritchie got injured. Congratulations on your first goal Walker, here’s to the next one.
The Goals –
Flashalytic’s 3 Stars –
1) Elias Lindholm
2) Dillon Dubé
3) Walker Duehr
(Stats compiled from Naturalstattrick.com // Game Score from Hockeystatcards.com // xG and Under Pressure charts from HockeyViz.com // Game Flow and Shot Heatmap from NaturalStatTrick.com)
Editorials
Recent articles from Shane Stevenson