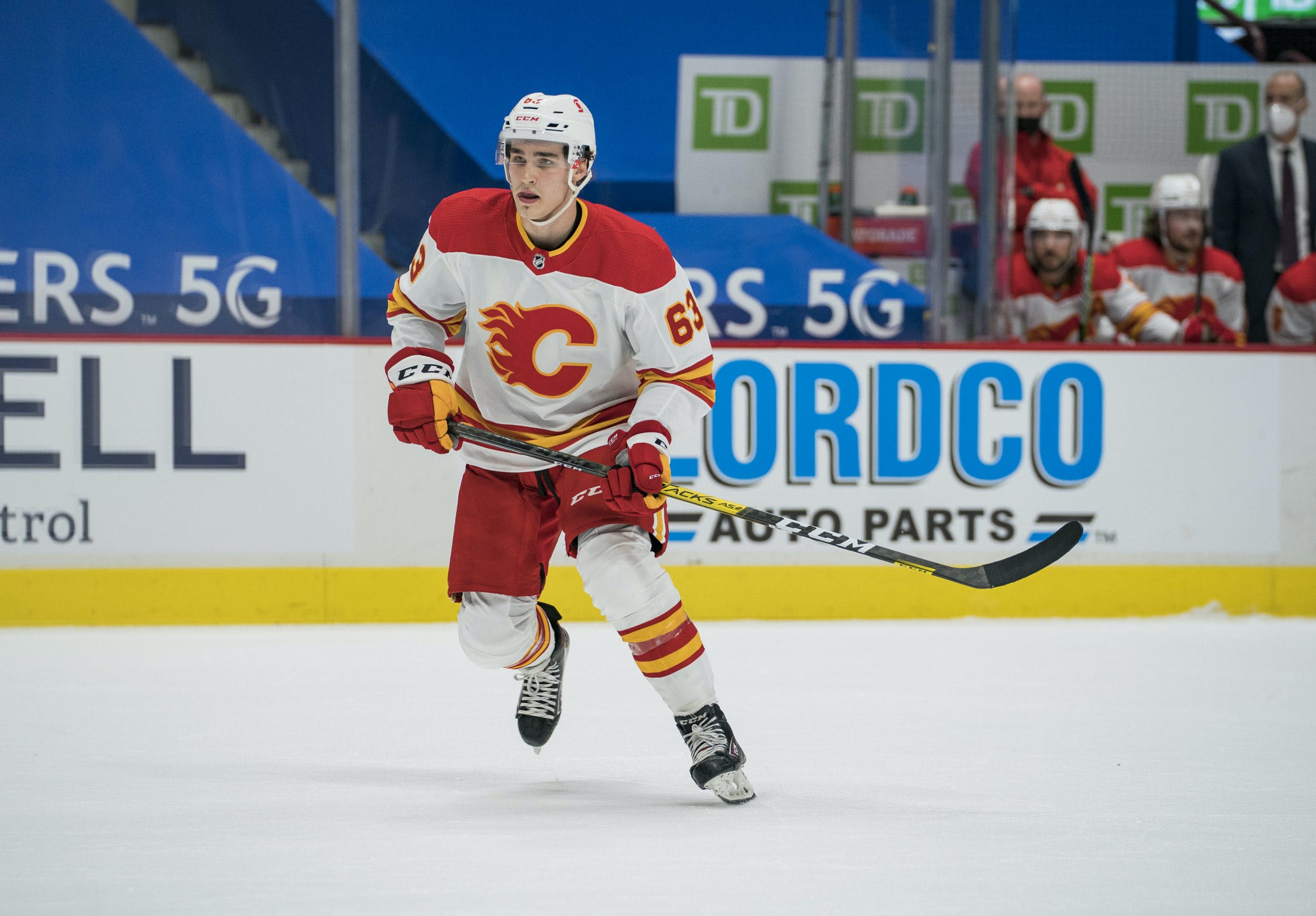 By Shane Stevenson
1 year ago
The Calgary Flames got back to regular business against the San Jose Sharks creating tons of high danger chances in and around the goaltender, but they also ended up letting some unfortunate goals get by them resulting in a 5- 3 loss. It was – overall – not a bad game offensively for Calgary. Adin Hill seems to want to play like an All-Star whenever he plays the Flames lately too, all contributing in a failure to gain ground in the Pacific Division standings.
CF% – 63.79%, SCF% – 58.09%, HDCF% – 64.43%, xGF% – 63.86%
It’s a Team Game – If I gave you those numbers ahead of this game and said Calgary was going to achieve these ratios tonight it would have been presumed that Calgary was going to win. They did play well – and spent plenty of extended time in the Sharks zone in the high danger areas. There was an issue at the end of the second though, where Calgary got pinned for 8 minutes in their own zone. The Sharks scored 3 goals in that span and it ended up being the difference in this game.
Corsi King – Milan Lucic (73.83 CF%) was noticeably on top of his game tonight, straight vibing on a line with noted Lucic fan Dillon Dubé (67.62%) and Sean Monahan (71.11%). The second lowest skater by this metric was Andrew Mangiapane (52.69%) who posted numbers that were just fine. Really makes you feel like they let this one slip away.
Corsi Clown – The lone wolf that saw more attempts go against him than he helped create, Blake Coleman (48.69%). If I could pick one forward off the roster that I’m not currently worried about their defensive effort it would be Blake Coleman. Matthew Tkachuk (65.55%) a close second.
Taken By Chance – Feeding on the sharks and not allowing a single high danger chance against was the Flames fourth line of Trevor Lewis (58.39 SCF% // 100 HDCF%), Adam Ružička (52.76% // 100%), and Brad Richardson (53.38% // 100%). In a weird set of events the D pair that let the most raw high danger chances didn’t get scored on: Oliver Kylington (50.21% // 57.09%) & Chris Tanev (54.43% // 66.30%).
xGF% – I don’t know why Blake Coleman (39.88 xGF%) struggled so much tonight – the next closest was Andrew Mangiapane (53.22%). The Flames created a ton of potential offence in this one, but they also allowed more against Vladar than they normally would. The Sharks had better finishers in this game, and it hurt Calgary.
Game Flow – As you can see the Flames clearly made it difficult on the Sharks, but Adin Hill was up to the test. Just one more of those attempts bounce in and Calgary steals a point – or they could shore up defensively when the rookie backup is in the net. That’s a little more than usual allowed from the deep slot for Calgary, which is being nitpicky when you compare the two sides.
In The Crease – Only 2 goals against at 5v5 – one medium danger, one high danger – on an expected goals against of 1.73. All resulting in a 0.900 5v5 SV% for Darth Vladar who suffers his first career regulation loss in a Flames uniform. Now he’s young and this is the first non-high quality game from him – and I’d be willing to guess nobody is more upset with that than himself. Interested to see how he comes out next time he plays – maybe he’ll finally get to start in Calgary.
Today’s Specials – Nightmare is an understatement. Broken stick on the first PK – Backlund waited until the puck left his area and went for a stick, nobody adjusted and Hertl had all day to walk in and rip one. I say him grabbing the stick was the right call, but some may disagree with that. The second goal comes as a PP ends on a Karlsson breakaway, another unfortunate event. Both preventable, but uncommon for this team to give up. I suspect we wont see those mistakes happen for awhile going forward.
Player Spotlight – Dillon Dubé/Milan Lucic – These two guys have some weird extra chemistry that extends off the ice as well as it does onto it. Lucic has been the best of all the fourth line guys this year and has earned his third line spot, and he brings out the best in Dubé which is something the Flames could use long term. If Calgary can finally formulate a third line that’s impactful every night they’ll get that much harder to play against.
Shoutout – Adam Ružička congratulations on your first NHL goal. It was a fantastic second game and you were noticeable all over the ice. Keep it up!
Flashalytic’s 3 Stars –
1) Matthew Tkachuk
2) Adam Rużička
3) Dillon Dubé
The Flames return home for a game against the Carolina Hurricanes – Thursday at 7 p.m. MT. That game will be covered right here at FlamesNation. Sorry, Minnesota Vikings I’ll be busy – besides, you just lost to the Detroit Lions.
(Stats compiled from Naturalstattrick.com // Game Score from Hockeystatcards.com)
Uncategorized
Recent articles from Shane Stevenson