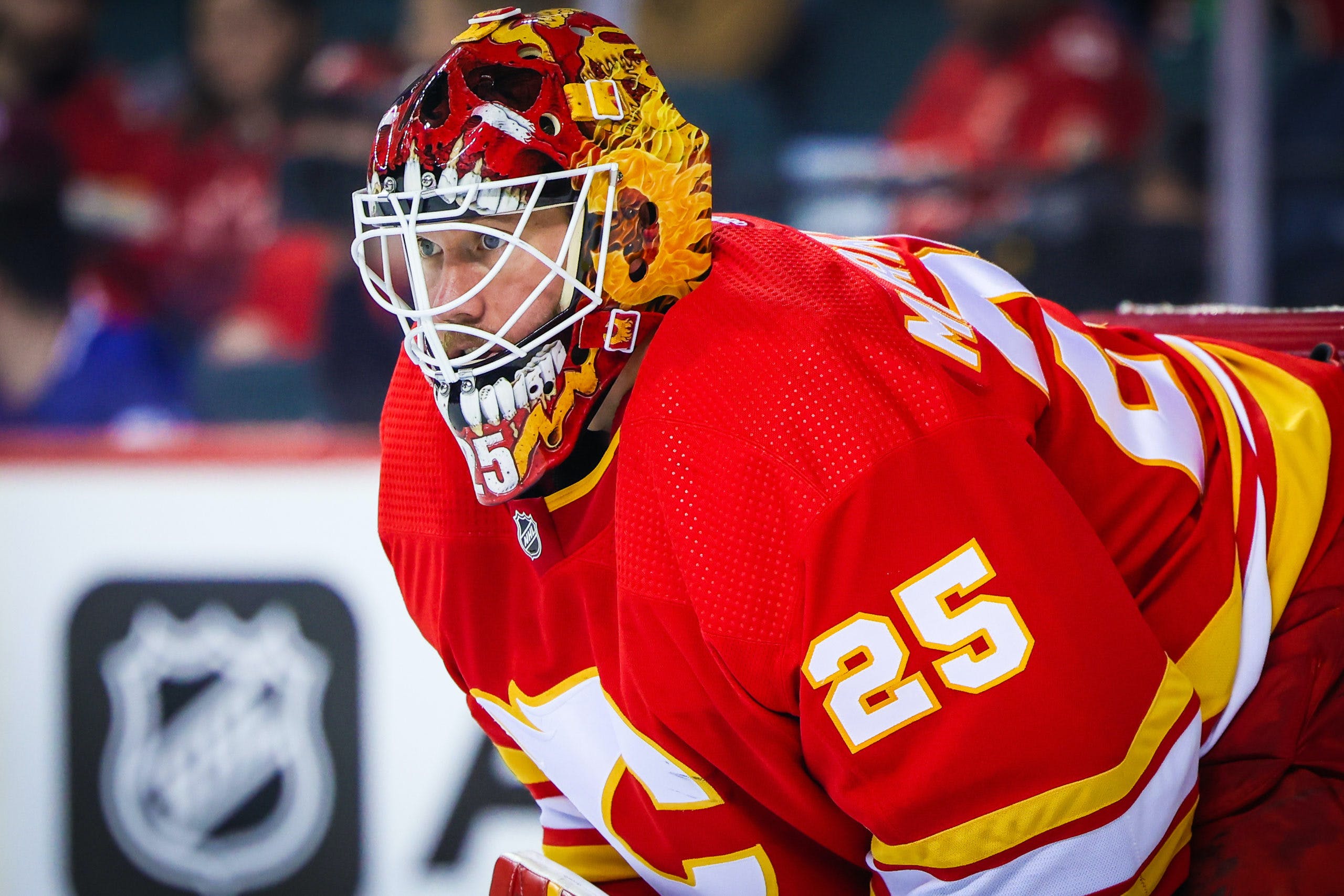 By Shane Stevenson
10 months ago
The second period saw the Buffalo Sabres get some dangerous quality chances – the only reason the Calgary Flames were able to get the point was Jacob Markstrom. Unfortunately, he was the victim of a bouncing puck in overtime, but since nobody else got on the board that ended up being the game winning goal. We can be glad it wasn’t a playoff game with implications and move on – preferably with more of an emphasis on the attack. They’ll bounce back – this game’s more of an outlier than the normal.
CF% – 53.25%, SCF% – 54.01%, HDCF% – 38.05%, xGF% – 54.09%
It’s a Team Game – The Sabres were able to get seven high danger chances in the second period. They made it a priority all night to shoot the puck from directly in front of the net and nowhere else. You’ll see down at the heatmap. Calgary may have taken more attempts, but the Sabres played strong defence themselves, keeping Calgary from chances in tight. The bounce back was present but not enough – that’ll happen sometimes.
Corsi King – Oliver Kylington (68.70 CF%) and Chris Tanev (66.39%) lead the way with over 20 Corsi-events for. Nobody got crazy outmatched in overall attempts, just in the quality of them. Milan Lucic (65.30%) leads the forwards tonight with linemates Sean Monahan (59.65%) and Dillon Dubé (56.40%) just behind him. The usual suspects like the Flames top line were there too. Events happened tonight with Kylington-Tanev on the ice, not so much for the other defenceman.
Corsi Clown – Noah Hanifin (41.37%) had the lowest ratio of events, Blake Coleman (44.64%) had a bit of an off ratio, but when that line was on the ice the number of chances against were the smallest number of anyone on the team. Problem is they didn’t produce much in the terms of offensive chances. They really did their job just fine defensively; the goals were what never came.
Taken By Chance – As per usual the Flames top line of Johnny Gaudreau (75.16 SCF% // 81.44 HDCF%), Elias Lindholm (75.16% // 81.44%), and Matthew Tkachuk (75.16% // 81.44%) were able to all muster up 5 of Calgary’s overall 7 high-danger opportunities. These guys continue to do that every single game (almost) – some games they don’t go in and others you get 4 point games – it happens!
xGF% – It should really surprise nobody at this point that in a game with no 5v5 goals that Chris Tanev (77.47 xGF%) is at the top of the leader board in the quality share. When the Flames top line and the Tanev pair were on the ice Calgary was able to press the most. The depth came up short tonight too – albeit was Calle Jarnkrok’s (43.84%) first game in the Flaming C. Not everybody fits in the grooves as seamlessly as Toffoli did.
Game Flow –

Buffalo rebounded from an early penalty kill in the first before Calgary was able to snag some momentum back. The second period saw the Sabres get some massive chances – all those long lines are significant attempts that Markstrom saved. The Flames grabbed momentum back with a strong third but lost it in the randomness of 3v3 OT.
Game Score – Jacob Markstrom (1.08 game // 0.34 average) was the third ranked Flame and fourth overall for the whole game. I’m not going to get up in arms about one mistake. Chris Tanev (1.62 // 0.87) was the highest ranked Flame. Of the Flames depth players Milan Lucic (0.19 // 0.27) earned the highest score.
Shot Heatmap – 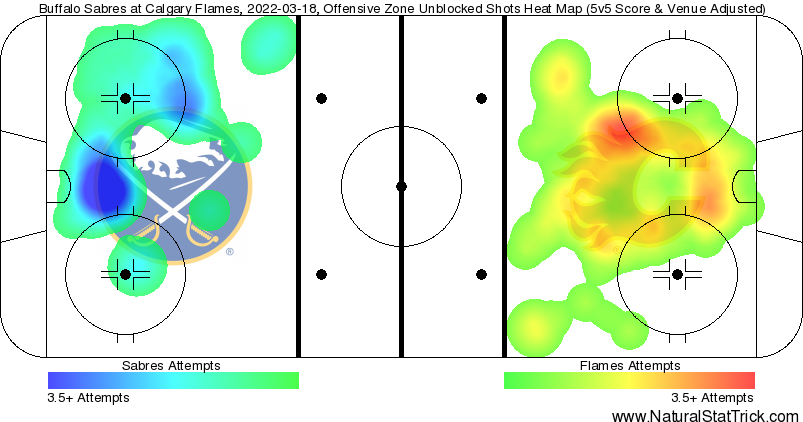 The Sabres winning the battle to get to the net was not something i would have bet on before the game – so colour me impressed. They should really consider using the left side of the offensive zone though – they might be able to when they play other teams that don’t have Chris Tanev defending that side of the ice.
In The Crease – Hey, everyone’s made mistakes at their job before, no need to criticize that more than just recognizing it was an odd bounce. 1.64 expected goals against (at 5v5) with nothing getting past him. One blunder away from tying Kippers record stings, but he’s a solid goaltender and he’ll work to get himself more cracks at it.
Today’s Specials – Another night with a perfect penalty kill is all one can ask for at this time of the season. The number of skilled weapons out there applying puck pressure whenever possible is fun to watch. It’s not often teams are able to even get significant chances on every power play when they play Calgary. One early power play again too. I’d like to see them get one in the second period soon.
Flashalytic’s 3 Stars –
1) Chris Tanev
2) Elias Lindholm
3) Jacob Markstrom
The Flames play the Vancouver Canucks on Saturday night in the late game on Hockey night in Canada (CBC, SN).
(Stats compiled from Naturalstattrick.com // Game Score from Hockeystatcards.com)