Beyond the Boxscore: Calgary Flames win thrilling first ever game against the Seattle Kraken 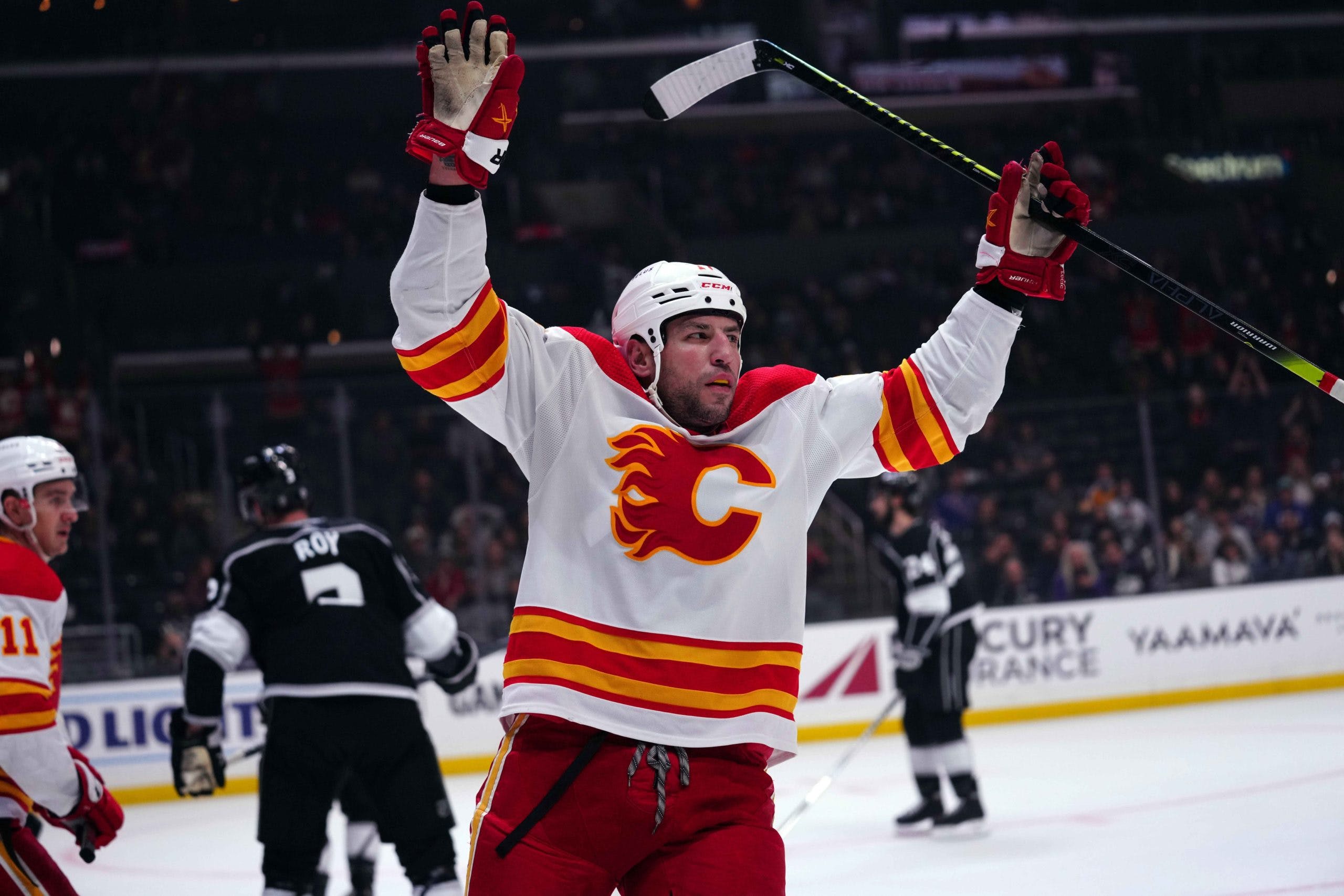 By Shane Stevenson
11 months ago
Hey folks, it’s been a hot minute since the last time a Flames game was played, and the product the Flames brought back was absolutely entertaining. Maybe not as strong defensively as they would have liked, but the Flames played a strong offensive game and continually pressured the Kraken in their own end. It was back and forth the entire match, including an insane final 5 minutes. In the end Calgary came back with a big win as the season resumes.
CF% – 60.67%, SCF% – 58.72%, HDCF% – 53.24%, xGF% – 58.74%
It’s a Team Game – Seattle had real trouble creating chances, but when they did get some, they were right in the crease. They got some good bounces and timely chances as they pushed Calgary back a little bit at a time. Calgary themselves just outplayed Seattle for longer and more consistent stretches and were the ones in true control of the game for the majority of it.
Corsi King – Andrew Mangiapane (77.13%) and the Blasty Bros, Milan Lucic (76.15%) and Dillon Dubé (70.81%), were an instant hit. They hit hard, don’t back down from any challenge and score goals. It’s a fun line: Breadman and the Blasty Bros.
Corsi Clown – The Flames fourth line of Trevor Lewis (29.61%), Sean Monahan (34.04%), and Brad Richardson (39.30%) were being picked out by Seattle who had last change. They did not respond very well to the challenge tonight themselves. Everyone else was reasonably close to (or over) the 50% cutoff.
Taken By Chance – Once again let’s hear it for Mangiapane (79.04 SCF% // 81.57 HDCF%) who had over 4 high danger scoring chances while allowing 1. Noah Hanifin (65.23% // 77.37%) and Rasmus Andersson (65.23% // 77.37%) were heavy in terms of offensive opportunities created, and Hanifin was rewarded for that at the end of the game with an ENG.
xGF% – This one easily goes to Matthew Tkachuk (92.26 xGF%) with the absolute ridiculous number. His linemates Johnny Gaudreau (60.10%) and Elias Lindholm (66.12%) also posted great numbers, but when Tkachuk was on the ice the puck was in the attacking zone – period.
Game Flow –

As we can see the Flames kind of muddled around to start before taking control of the game for the rest of it. All-in-all this was a decent enough first showing after over two weeks off. Good to see everyone back and playing good hockey.
Game Score – Johnny Gaudreau (4.12 game // 1.64 average) led the way with his 2 goals being a key factor. Matthew Tkachuk’s (3.96 // 1.49) 3 points also drove his game score up high. Nice to see the big man Milan Lucic (2.21 // 1.01) have such a strong game. There were a few players with negative scores, but outside the fourth line none were significant enough to affect the players average score.
Shot Heatmap – 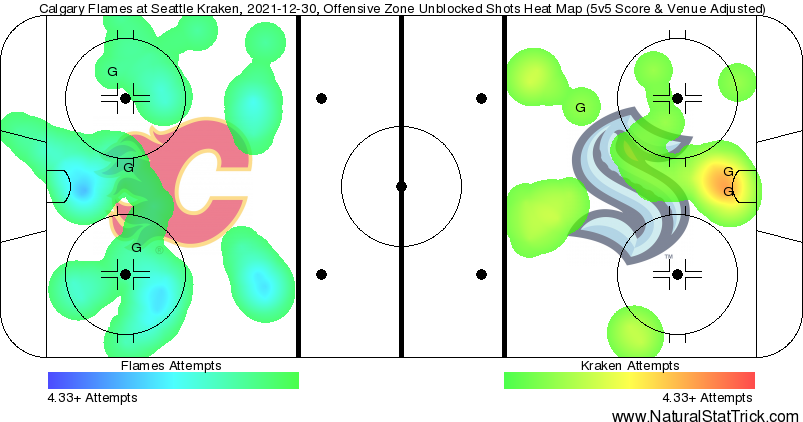 Seattle – that’s pretty bare. They were on the second half of a back-to-back, but even then the actual attacking performance wasn’t very good. Even on a night when they get all the bounces the Kraken still lose – good for Calgary (who deserved the W).
In The Crease – Seattle really didn’t create too much at 5v5 – 1.12 expected goals against for Markstrom. He had two high danger chances and one low danger one beat him. Gio’s goal and the early Jarnkrok goal were tough pills to swallow, but the third goal Seattle scored was just a really nice play. Markstrom still has a small amount of rust to shake off.
Today’s Specials – Well they did get a PP goal, but someone needs to tell the first PP unit to move their feet on the power play. Everyone was standing so still It looked very easy for Seattle to get into passing lanes and prevent any dangerous chances a man up. If their power play was going this one would have never been close.
Player Spotlight – Sean Monahan – He’s back on the fourth line, he’s struggling, and he can’t seem to get himself into 5v5 scoring chances. He’s played with fourth line guys, he’s played with top 6 guys, he’s played with everybody – and yet he still isn’t impacting games to the way his salary dictates he should be able to. It’s a darn shame such a serious injury was able to affect him to this level.
Flashalytic’s 3 Stars –
1) Matthew Tkachuk
2) Johnny Gaudreau
3) Noah Hanifin
The Flames next scheduled game is against the Blackhawks on Tue., Jan. 2 – we’ll wait and see what happens though going forward. Whenever the next game is played you can bet it’ll be covered at FlamesNation and Beyond the Boxscore.
(Stats compiled from Naturalstattrick.com // Game Score from Hockeystatcards.com)