Beyond the Boxscore: Calgary Flames sneak away with point in low-event affair 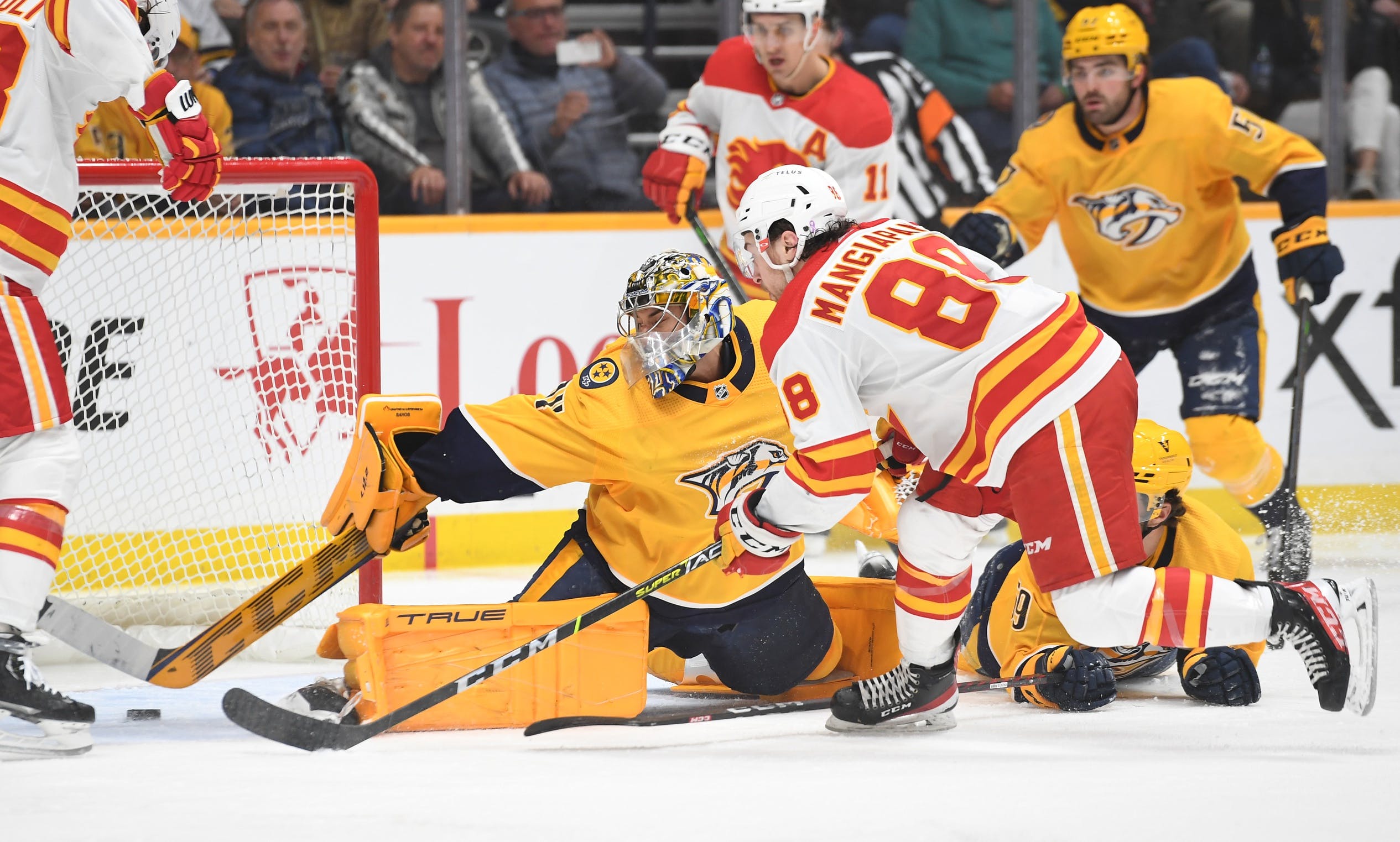 By Shane Stevenson
9 months ago
As the end of the season marches closer some teams are in complete fight mode and some are in preparation mode. Nashville isn’t quite in yet; one could see how they could have the ability to fight back and/or control play. Calgary playing the last of a 5 games in 8 days span with a back-to-back on the road. Hard game to play and a good thing to be able to grab the one point.
CF% – 46.83%, SCF% – 42.51%, HDCF% – 41.98%, xGF% – 40.9%
It’s a Team Game – This was not a high-event game with multitudes of shot attempts. No, it was tight checking with not much space to manoeuvre with the puck. The ratios Calgary put up are still some of the worst across the board for any match this season, but the quantity of chances against is still relatively low – Nashville was just able to keep them out of their grill successfully. Well, most of the Flames anyways – not Mangiapane.
Corsi King – Matthew Tkachuk (53.68 CF%) is now the member of his family with the best individual NHL season. Must be special to be able to pass your dad and there’s no doubt his father is thrilled for him. When players have been asked about their point totals they’ve been largely focused on the task at hand still – the Stanley Cup. It still will be special to hit 100 points for Tkachuk, but we all know a championship would make them feel even better.
Corsi Clown – Dillon Dubé (23.42%) and his north/south speed ran into a team that played trap defence really well. In order for Calgary to counter they would have needed quicker transitions from their defence, but in this affair lots of those quick transitions ended up as missed passes or icing calls. That’s the type of defence you have to learn to be able to constantly get by if you want to win a championship. Nashville doesn’t bring that every game, but they showed Calgary they have the capacity to play that tight checking style. Albeit their style of defence is still more passive than the Flames.
Taken By Chance – The only line that was able to get everyone on the positive side of the ratios was the top one with Elias Lindholm (51.75 SCF% // 61.11%). That line has had less than 10 bad games all season when deployed together – to which I believe they’ve played at least 73 full games to completion. They work, and have worked, in every situation all season. Here’s hoping the transition into the playoffs looks like the rest of the season.
xGF% – Johnny Gaudreau (54.12 xGF%) is a pending free agent. I don’t say that for any other reason than to remind fans to just enjoy the special season he’s given Flames fans. This is beyond amazing and is one of the top 3 seasons any Flame in history has ever been able to put together. The points are one thing, but the hustle and commitment he’s shown to playing 200-foot hockey stands out from the crowd too. Johnny Gaudreau more than deserves to be a finalist for the Hart trophy – include him on your ballot.
Game Flow –

The Preds really made it hard for Calgary to get to Saros – and it still went to overtime. Can they do that successfully 4 times in a 7 game span? We’ll see – i for one am expecting game one to be a pain in the rear for whoever draws the Flames.
Game Score – Andrew Mangiapane (1.87 game // 1.05 average) is the top performer from either squad. His two goals get him up to 34 on the year and he’s achieved that by being such an aggressive net front presence. He charges the crease methodically always with his stick in a position to whack the puck home. I saw somewhere that someone suggest Mangiapane go to keep Gaudreau and Tkachuk at a reasonable price. I just want to say, you won’t get very far as a franchise if you let players like Andrew Mangiapane get away from your roster. His work ethic that brought him to the NHL after being picked in his 13th round of draft eligibility is something I want everyone in the locker room to see.
Shot Heatmap – 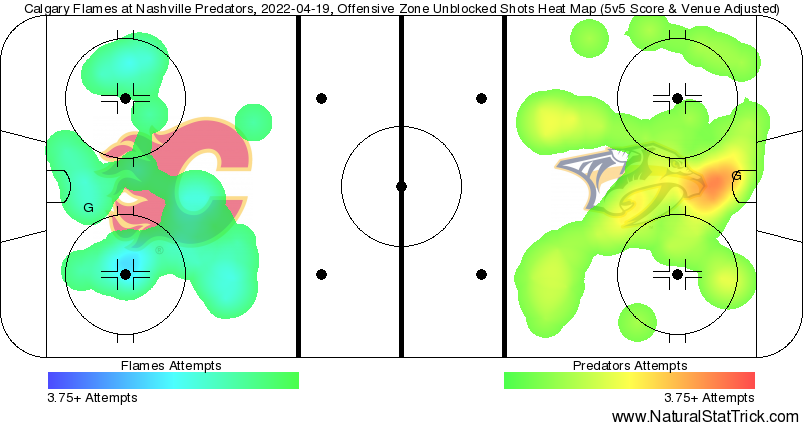 If Nashville tried to sacrifice defensive positioning for more offence than Calgary would have buried them in possession and dangerous chances from the slot. The end result sees very little in terms of volume from any one area on the ice.
In The Crease – Only one 5v5 goal in this match on a great crease drive by Matt Duchene. See Vladar did stop his initial attempt, but his rebound bounced off some players/sticks and back into the Flames net. Defence is in the right position then that goal doesn’t happen. 1.82 expected goals against with a 0.957 5v5 SV% with one high danger goal getting by him. Not a bad job for Darth Vladar.
Today’s Specials – The Flames top power play adjustments are something I quite like. Rasmus Andersson had done a damn fine job on the top unit, but I think Noah Hanifin can be more creative offensively on the PP. As for the extra forward it does not matter to me If it’s Mangiapane or Toffoli, but Mange has a bit more speed.
Player Spotlight – Calle Jarnkrok – He has to be accepting donations at this point because he can’t buy a goal. Jarnkrok has been absolutely robbed 4 or 5 times going back to his first match as a Flame against the Sabres. Tonight, wasn’t his strongest game, but before that it had been two weeks of getting better and better. The illness that plagued him is gone and here at BTB we’re hoping goaltenders stop making highlight reel stops on him.
Flashalytic’s 3 Stars –
1) Andrew Mangiapane
2) Matthew Tkachuk
3) Erik Gudbranson
The Flames play again next against the Dallas Stars on Thursday at 7 p.m. MT at the Saddledome.
(Stats compiled from Naturalstattrick.com // Game Score from Hockeystatcards.com)