Beyond the Boxscore: Calgary Flames spoil Johnny Gaudreau’s return to the ‘Dome By Shane Stevenson
2 days ago
A game that should never have business in being that entertaining ended up being one of the more electric nights at the ‘Dome this season as the Calgary Flames spoiled Johnny Gaudreau’s return. It was a game against the last-place Blue Jackets at home with a night of rest before – as scheduled a win as one could make at this point in the season. They just kept running into Blue Jackets goaler Joonas Korpisalo who stood on his head at times. The Flames did get some quality chances, but largely had a shoot from anywhere approach. No complaints because it worked, Johnny Gaudreau got a couple of primary assists, but the Flames got the two points. Fair trade!
CF% – 67.16%, SCF% – 61.54%, HDCF% – 58.91%, xGF% – 65.94%
It’s a Team Game – The first period the Blue Jackets didn’t resemble anything that looked like a professional hockey team. 8 or more key turnovers in their defensive zone but lucky for them the Flames couldn’t bury those chances. After the first period I felt like the Flames had earned a 3-0 lead with only one goal to show for it. Columbus couldn’t possibly do any worse the rest of the way – and they didn’t – using that lack of finish against the Flames to keep crawling back into the game. The Flames never quit at any point with every player giving it everything they had to get a win – it was super fun to watch.
Corsi King – Nazem Kadri (83.20%) had his legs going early using his speed to get on the forecheck and cause turnovers. His linemates Huberdeau (75.11%) and Lucic (81.03%) also created noticeable offensive zone turnovers. Blake Coleman (81.30%) was the other player to finish with over 80% of the shot attempt share. Everyone on Calgary pretty much was as they fired everything, they could towards the Columbus net.
Corsi Clown – Only 1 person was below 50%, and even then, it wasn’t bad at all. Dillon Dubé (48.34%) was good with his speed on the breakout tonight and always made the safe/right play. I got no quarrels with what he did – that line just got hemmed in the few times the opposition created 5v5 chances.
Under Pressure – 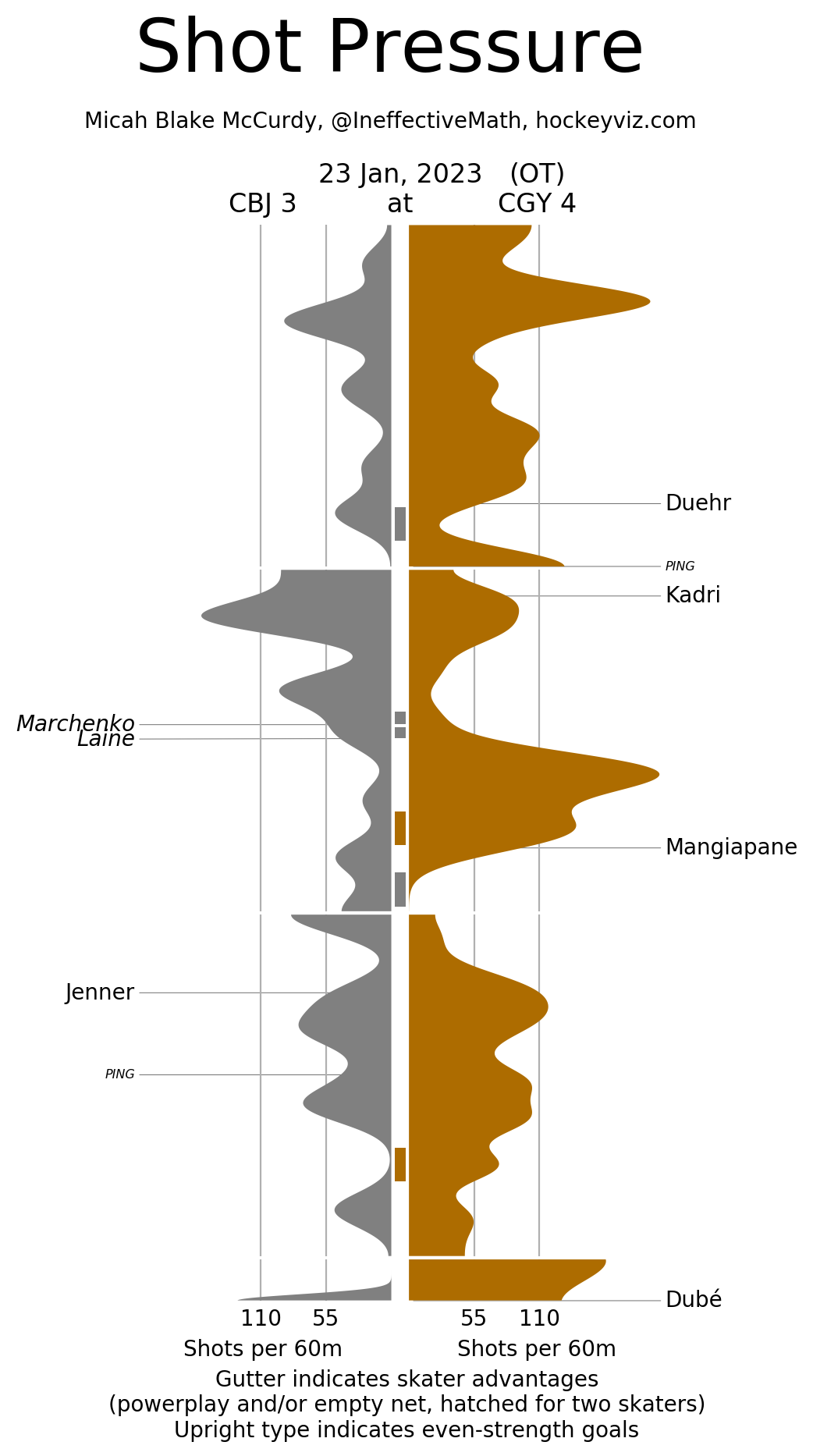 Taken By Chance – One man that had a visibly rough time with puck management was MacKenzie Weegar (46.74 SCF% // 18.54 HDCF%). We’ve seen the occasional gaffe for a miscue, but every defenceman does that – tonight he did it a clear 3 or 4 times. He’s already earned “wipe the ledger for tomorrow clean” status with how reliably he shows up to play each game. Sometimes it’s hard at work – not every day is easy. Noah Hanifin (55.86% // 58.06%) led all players in high danger chances for at 6 but also tied Weegar for the most seen going back their own way at 4.
xG Breakdown – 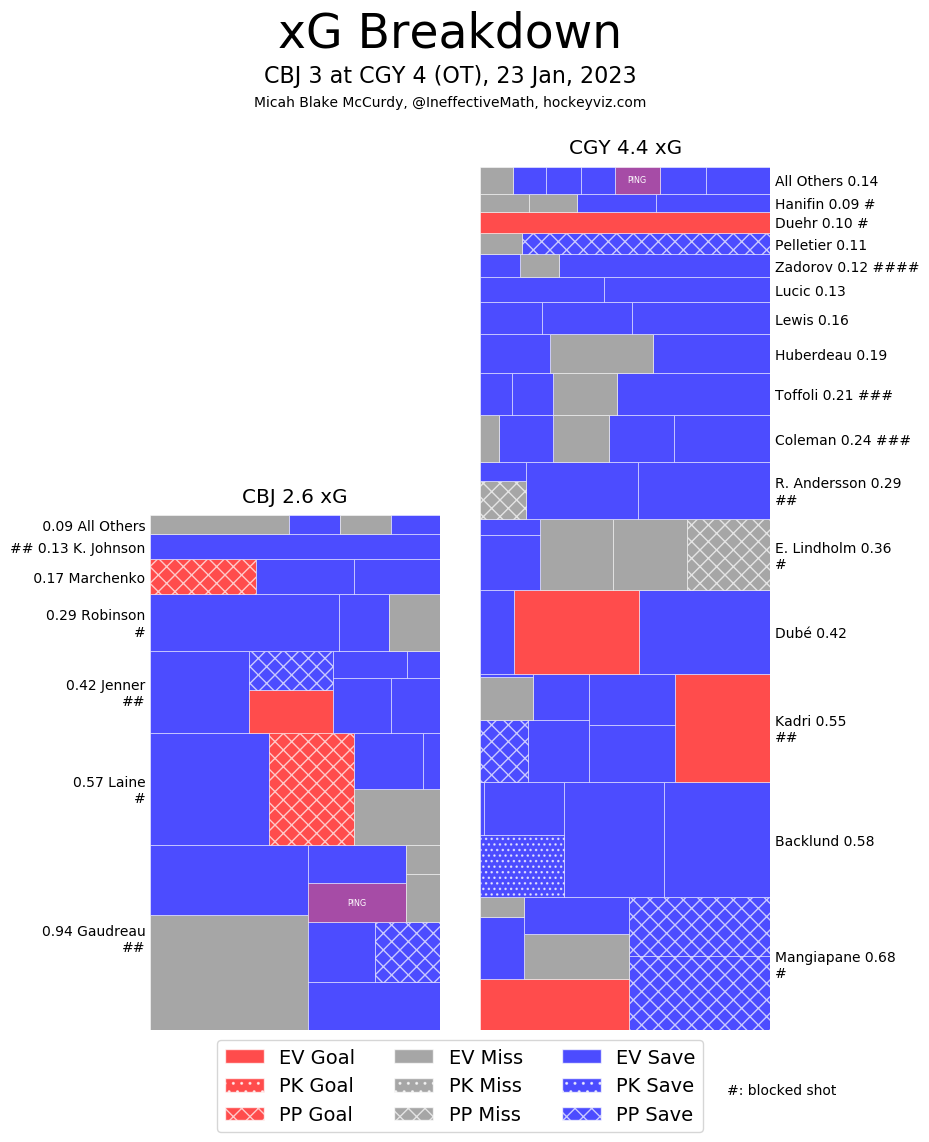 xGF% – Despite his linemates in Lewis (48.65%) and Duehr (45.33%) being under 50% Jakob Pelletier (77.04%) found his own way to get some extra quality attempts. He almost had one on the power play if he had just been able to elevate the puck a little steeper. Nazem Kadri (90.05%) gets into the exclusive 90% club. It’s happened under 10 times this season and is very hard to achieve a game with that number. A whole lot of things have to go right for you as well as the ability to keep making things happen with those bounces. Kadri had a very good night.
Game Flow – 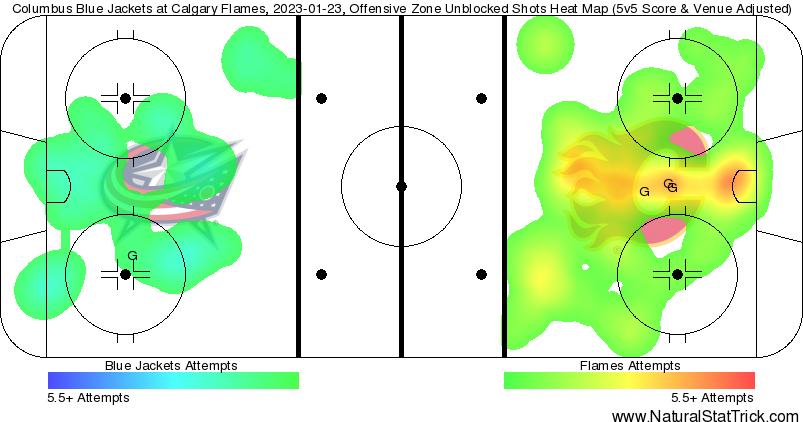 In The Crease – Dan Vladar only caved at 5v5 once and that was Boone Jenner’s look off of Johnny Gaudreau on a 2-on-1. They classified that as a medium danger goal against on a total expected goals against of 1.73, At 5v5 Vladar definitely outplayed his expected goals – hard to stop those Johnny Gaudreau cross crease one-timers no matter who you are. All-in-all another win by Vladar makes him 9-0-3 on a 12-game point streak. All they paid for this guy was a third-round pick – fantastic stuff.
Player Spotlight – Chris Tanev/Nikita Zadorov – Losing Tanev is about as big a blow to this team as they could have. He’s an absolute rock on the backend and their call-up options remain thin. Tonight, Nikita Zadorov stepped up into Tanev’s role and showed everyone why he was earning the praise of his coach. He’s been more than adequate and is 100% the guy to step up and play with Weegar should Tanev be out for any length of time. As for who plays with Stone – I wonder if they try Mackey there or bring back Dennis Gilbert. The best option? Tanev being ready to go if he can.
The Goals –
Flashalytic’s 3 Stars –
1) Nazem Kadri
2) Andrew Mangiapane
3) Nikita Zadorov
(Stats compiled from Naturalstattrick.com // Game Score from Hockeystatcards.com // xG and Under Pressure charts from HockeyViz.com // Game Flow and Shot Heatmap from NaturalStatTrick.com)
Editorials
Recent articles from Shane Stevenson