Beyond the Boxscore: Calgary Flames start new year off with same old song and dance 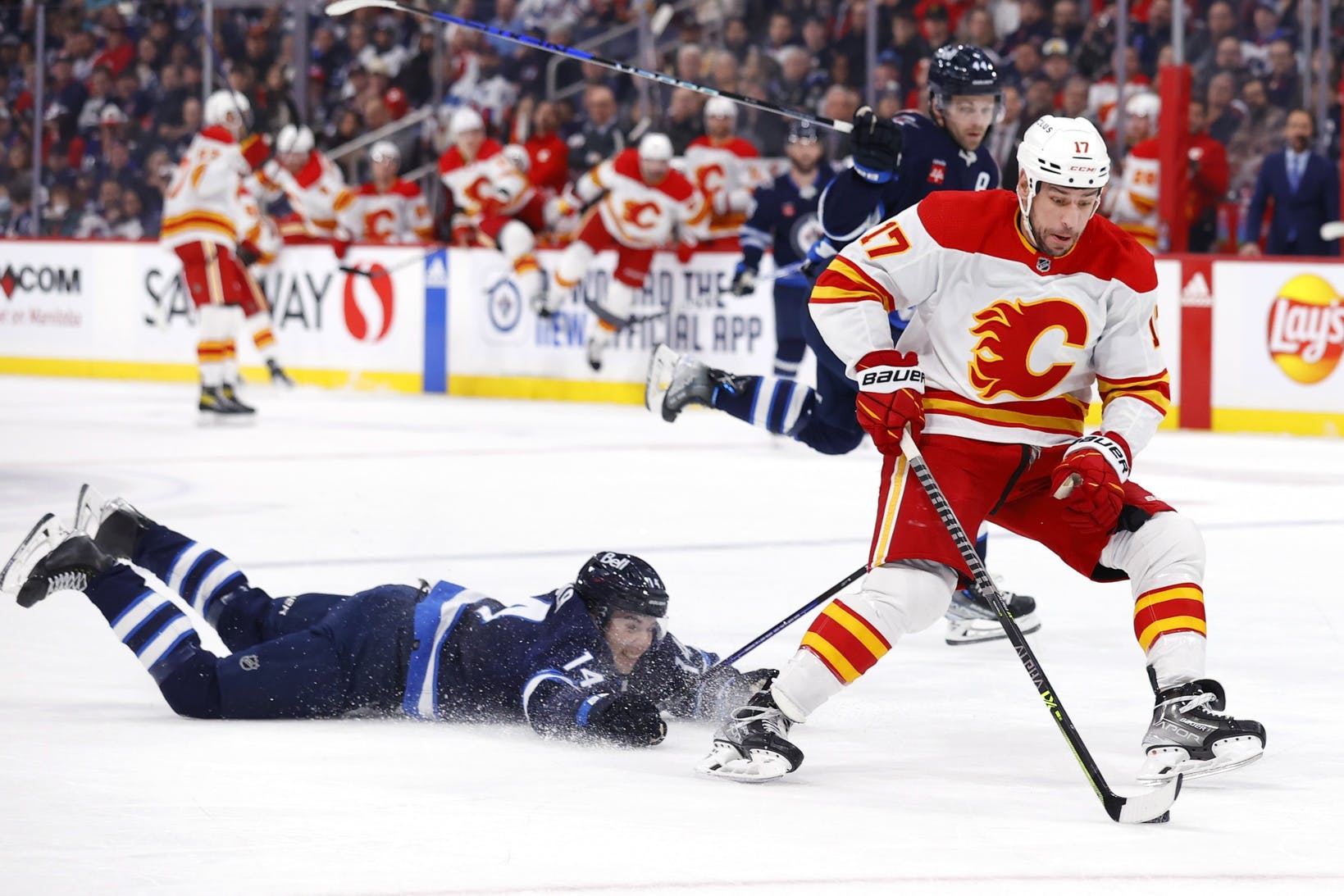 By Shane Stevenson
1 month ago
It was another game where Calgary was able to blissfully stroll along the perimeter of the Jets offensive zone without being able to get to the dangerous areas of the ice. Can’t be called a rout – it wasn’t by any means – but more of the same from a team that finds one way to lose a bunch of hockey games and tends to do it over and over again. Pretty sure that’s the definition of insanity. Almost 40 games in and things still just aren’t clicking with the right pairings or lines – coaches playing players in spots too long holding on to that one good performance and everything in between. And the posts… I hate the damn posts.
CF% – 53.18%, SCF% – 61.01%, HDCF% – 39.09%, xGF% – 55.1%
It’s a Team Game – One important little category always failing them – those pesky high danger chances. The effect of Tkachuk and Gaudreau being gone has left a lack of attack from down low in the Flames zone. How many passes have found Elias Lindholm in *that spot* for a goal this year? The fact that I don’t need to drop a pin about where it is tells me you all know exactly where I’m talking about. Huberdeau is different – we all know that – but the adaption needs to come from both sides, and he still needs to understand when a cross crease pass is the choice and when a north-south one to catch the goalie with his heels on the red line is the other one. Does not help that the only player on the team to develop regular chemistry with him has been Mikael Backlund because apparently Mangiapane needs him too. It’s a whole mess of problems still trying to work themselves out game by game.
Corsi King – Trevor Lewis (73.43%) really only stood out to me once after Ružička (63.56%) and Zohorna (47.67%) were attacking down low. 2 to 3 good chances before it goes to the corner to Lewis and then it kind of died along the boards. That’s the problem sometimes – it’s too safe – someone take a risk or a hit and get the puck to the net. Compliments to the two big guys on the fourth I thought they did a fine job. Nikita Zadorov (63.52%) was the high man on the back end.
Corsi Clown – Jonathan Huberdeau (37.02%) and Tyler Toffoli (37.28%) are the low guys. Huberdeau with just 10:30 of 5v5 ice time and 13:43 total in all situations. Yeah, he wasn’t going but you’re paying $10 million to the guy next year maybe that’s a little low. I’ve got no say in the matter, so I’ll just bang my head off the wall while I watch this team get misused like crazy – the complete opposite of last year. Huberdeau did not just magically forget how to play hockey – he just has committed to playing different than he has to appease his coach. It feels like sometimes everyone’s so scared to make one mistake.
Under Pressure – 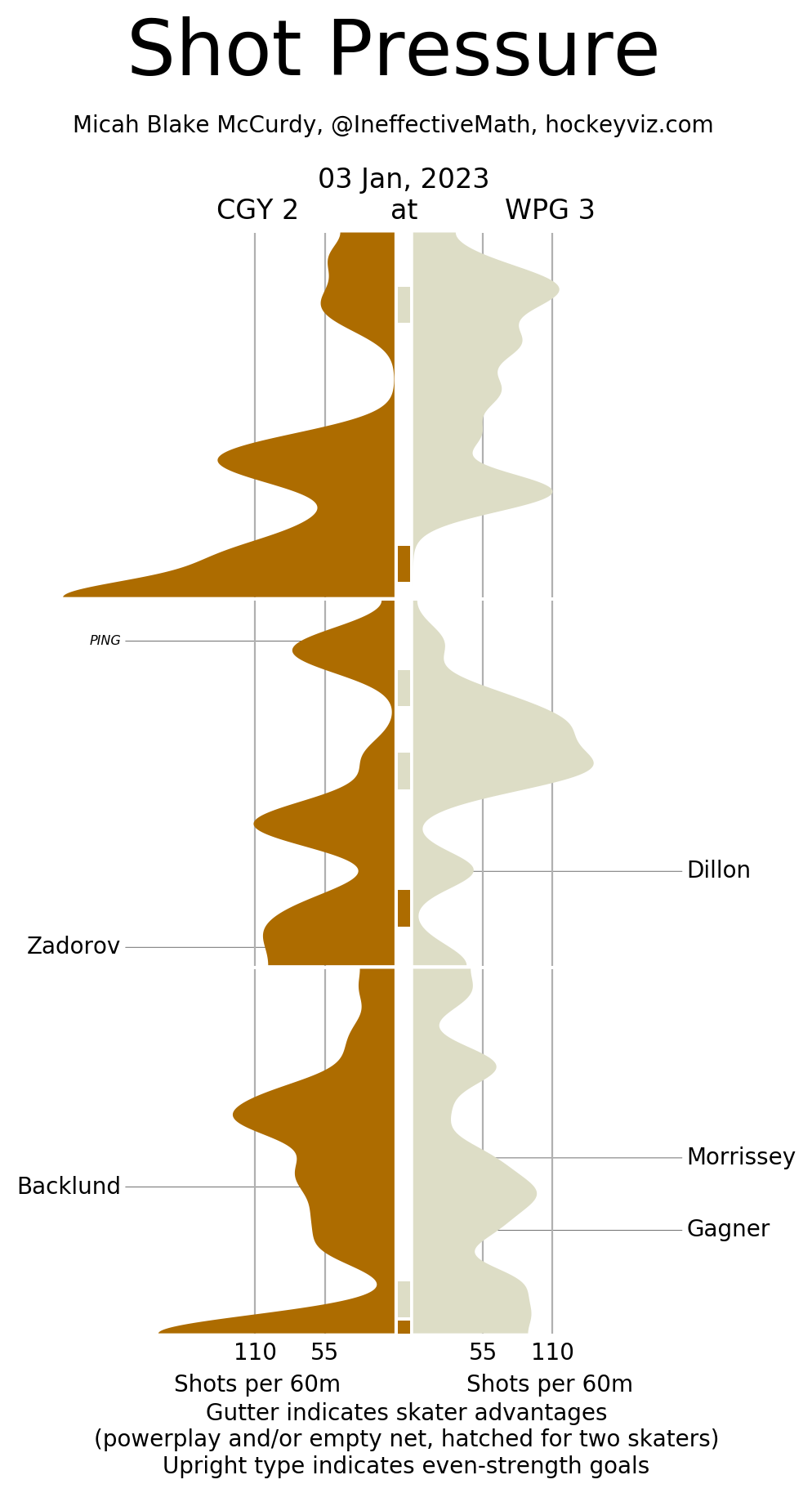 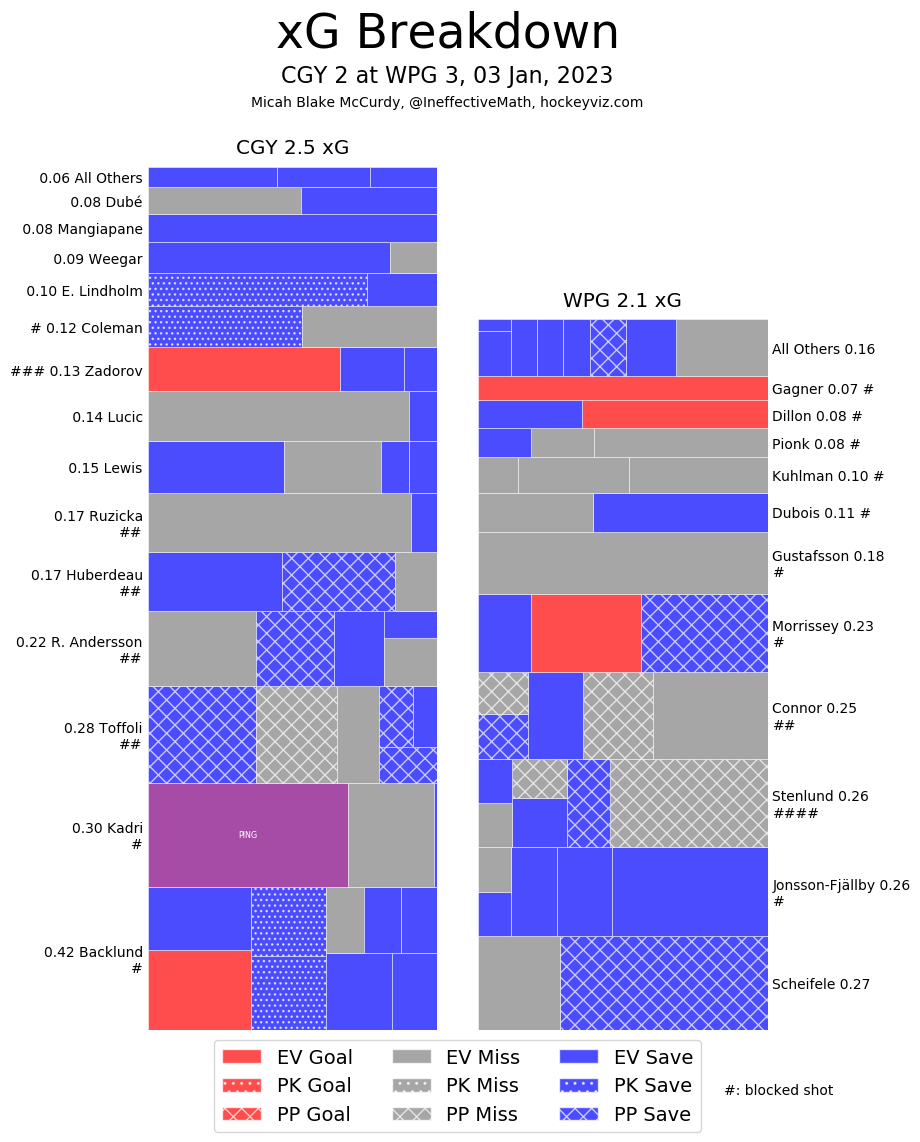 xGF% – Do you want to hear about who was good or who was bad? Bad tonight was Weegar (34.42%) who just couldn’t catch a break or have a bounce go his way. These are few and far between for the Flames defenceman, but he just didn’t have it tonight. Good was big Zadorov (76.42%) getting the goal to finally slide between Hellebuyck’s pads. He was mobile with his feet and found space to make passes in transition. Jets did a real good job hemming Calgary in for a couple of long stretches. Usually with Huberdeau (40.41%), Kadri (50.91%), and Lucic (49.71%). Them having that one decent game right when put together is starting to rear its head on Calgary nightly. It is not a properly constructed line.
Game Flow – 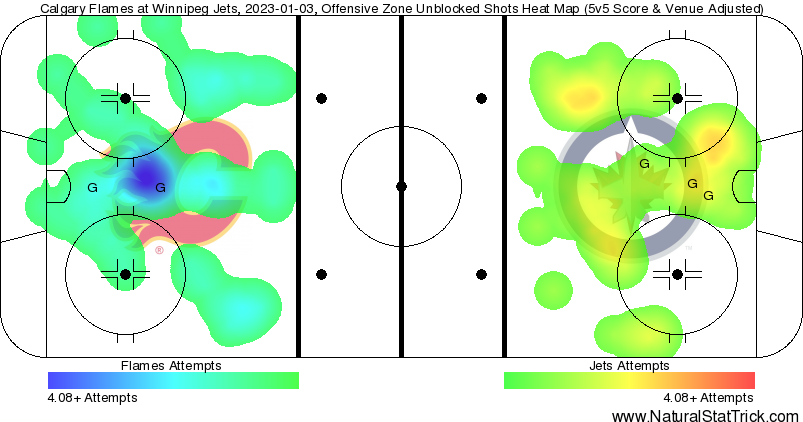 In The Crease – Tip goals happen, and they suck because a goalie can only commit to going one direction properly before having to adjust in a big way to a changed shot. They are super low percentage plays and if one goes in you write it off like its tax season and move on. The second tip goal though, well that one hits you right in the gut because it’s also extremely unlikely to have happen. Markstrom was taking a beating from some sour fans on twitter after the game – fans who couldn’t stop the initial shot let alone a deflected one. Probably the same people that find something else to complain about when he goes on a hot streak. Numbers weren’t great tonight, but neither was his or the Flames luck. As far as I’m concerned if your team only generates 4 high danger 5v5 chances all game the finger doesn’t point to the goaler.
Today’s Specials – Be nice for the ref to call the penalty before the Jets go down for a goal and instead a soft make-up one right after they take the lead. Not that it would matter Calgary’s power play most nights is about as dangerous as 5-year-old with a foam sword.
Player Spotlight – Mikael Backlund – We need to clone him (look away Walt). He’s the only guy that can get half the roster going but as soon as you move him away from them, they forget how to control play within 3 games. Lindholm and Toffoli have still been glued together too without even attempting to split them up. I just like to point out that nobody can say they’ve ever tried everything if they’ve never tried that. With how ice time gets allocated in the last month everyone’s going to get 13:30 or more 5v5 at least. Backlund can’t be the only solution to everything – they need at least one more and are not in a position to pay for one.
The Goals –
Flashalytic’s 3 Stars –
1) Nikita Zadorov
2) Rasmus Andersson
3) Blake Coleman
(Stats compiled from Naturalstattrick.com // Game Score from Hockeystatcards.com // xG and Under Pressure charts from HockeyViz.com // Game Flow and Shot Heatmap from NaturalStatTrick.com)
Editorials
Recent articles from Shane Stevenson