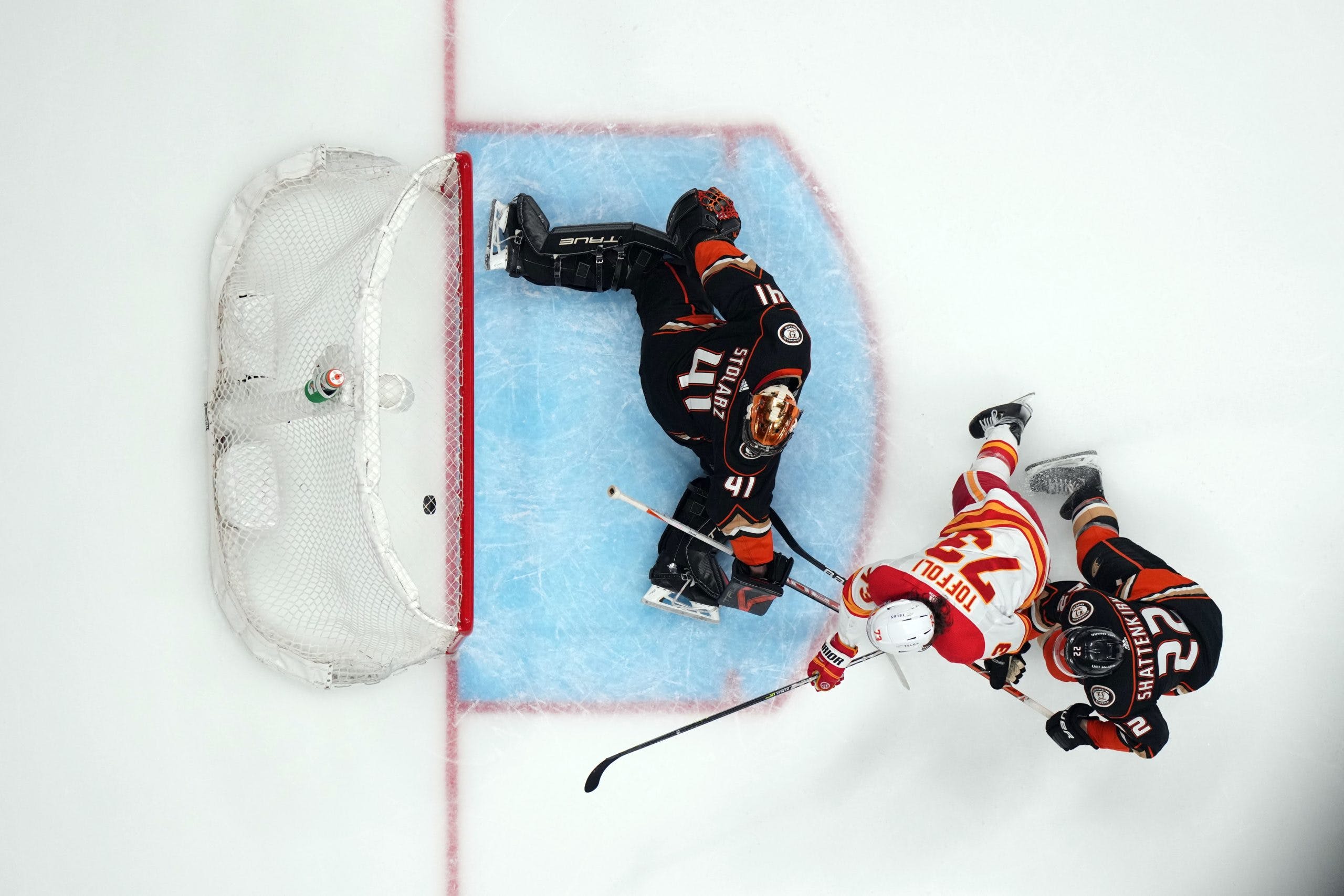 By Shane Stevenson
9 months ago
An uncharacteristically slow start for Calgary was ended – once again – off the stick of Flames star Johnny Gaudreau. Calgary could hardly enter the offensive zone to start the game and the most significant chances were all coming from the Ducks. It wasn’t until after the Toffoli goal that things started shifting more in Calgary’s favour. They were able to clutch out some depth goals tonight and because of that add another two points to their season total.
CF% – 63.06%, SCF% – 61.44%, HDCF% – 63.68%, xGF% – 55.81%
It’s a Team Game – If the Ducks did get a chance odds are it was a decent shot from the middle of the ice – they were good at getting Calgary turned around but not so great at beating Markstrom. To be blunt the Flames defence hasn’t been able to limit chances from in tight at their early season level for about 2 weeks now. The Flames have still been able to get some wins but that’s an issue that needs to be fixed before the possible playoffs. They never quit and kept pushing late into the game – feeding off the energy the top line constantly creates when deployed. Their first period was easily their weakest in this game, but a strong last 40 sealed the W.
Corsi King – Milan Lucic (86.22 CF%) is an extremely effective bottom 6 winger when he’s rolling. The physical presence of him in the lineup is enough itself to make NHL defenceman do an extra shoulder check heading into any corner. Add in him having a 20 to 4 advantage in all Corsi attempts and it’s really impactful. Unfortunate Looch couldn’t bury one tonight. Ryan Carpenter (83.38%) and 800 game man Trevor Lewis (82.66%) round out the line tonight – they dominated their match-up. Chris Tanev (70.92%) and Michael Stone (66.29%) led all Flames defencemen in this category.
Corsi Clown – Blake Coleman (48.84%) ends up as the “lowest” but basically summed up in nerd talk he just went even on the night. Same amount of total shot attempts for as he gave up. Across the entire board too it wasn’t just Corsi – scoring chances, high danger chances, and xGF% for him were all about even. He gets listed here because defensively he’s better than that – and I’m not worried this will continue in any capacity.
Taken By Chance – Johnny Gaudreau (59.26 SCF% // 82.42 HDCF%) is an unstoppable wizard of late. He can’t be stopped and finds ways on the scoresheet every single night – 3 points from 100 for JG13. Matthew Tkachuk (66.21% // 83.42%) really doesn’t get the respect he truly deserves for the work he puts in nightly as well. Together with Elias Lindholm (54.57% // 70.97%) they’ve given Flames fans something dead serious to root for. An elite top line that’s scoring near Franchise record totals. If that’s not enough to tune in every night I’m not sure what is.
xGF% – At this point it’s usually pretty easy to pick out the top xG performer but with highlighting two different people in corsi king and taken by chance maybe theirs an heir of mystery around it. Anyways Milan Lucic (73.22 xGF%) led your Calgary Flames here. Noah Hanifin (70.14%) also had a good game in terms of quality chances. Andrew Mangiapane (28.73%) gets two assists despite the worst total percentage on the squad. Hockey is such a funny game in that you could be getting out chanced like crazy but all it takes is one fortuitous bounce and you’re on the scoresheet.
Game Flow –

It really has not happened often this year where Calgary doesn’t have clear or even momentum when the first period ends. I expected this Ducks team that traded a top 4 defenceman, a top 6 winger, and one of the toughest players in the NHL away at the deadline to kind of fold over as Calgary dominated them – far from the case. Trevor Zegras is fun to watch, but won’t be if he keeps burning Calgary in a Ducks jersey.
Game Score – Johnny Gaudreau (2.60 game // 1.87 average) once again is on top. Doubtful his average game score can get to 2.00 but I’m not going to actually bet any money against it. Matthew Tkachuk (2.60 // 1.78) is also top 5 league wide in average game score. Noah Hanifin (2.39 // 1.02) and Andrew Mangiapane (2.37 // 0.79) round out the above 2.00 crowd.
Shot Heatmap – 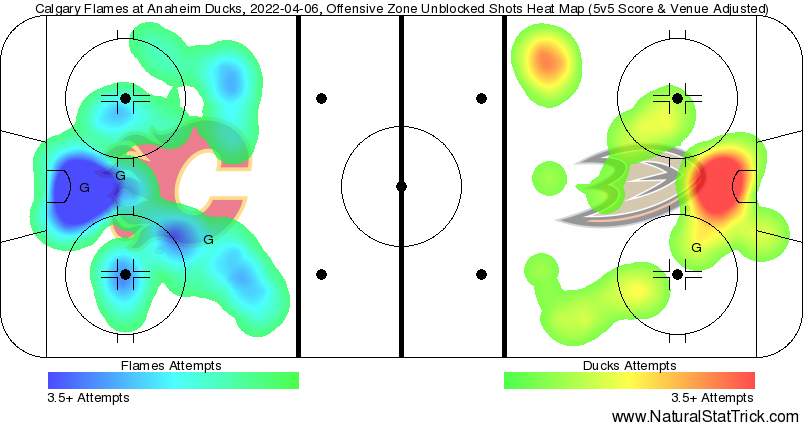 Slot shot season between these two opponents. Calgary during all their prime runs this season have been able to limit chances from within the crease – lately they’ve had teams be able to exploit them there (specifically Colorado). My concerns with Calgary currently lie in the consistency of the defenceman and the lack of forward depth scoring. Both things can be corrected before a possible playoff run.
In The Crease – Markstrom is a large reason Calgary won this game. Early on as Calgary struggled to create anything he stopped shot after shot to keep the score at 0-0. 2.63 expected goals against at 5v5 with just one medium (medium-high to me but…) danger chance against. 0.958 5v5 SV%. Fantastic stuff from the Flames number one – now start Vladar tomorrow and let him take a day off.
Today’s Specials – Penalty kill does not come through with a clean slate again – a once dominant penalty kill has shown lots of cracks lately. I always use the ol’ saying “better now than in the playoffs” but I use it because it’s just true. Slumps can come and go – you’d rather your unit be riding the highs of the percentages not the lows. PK currently running through their own version of low – which is still quite good.
Player Spotlight – Michael Stone – As some of you know I was the president of the Michael Stone fan club for years (sarcasm). Last season he turned me around and helped me understand the importance of player roles and proper usage. If a system is built around chaotic offence he isn’t much help on odd-man rushes the other way, but if Calgary plays functionally as a unit Stone and his booming shot can be a hidden asset. 500 NHL games as well which is nothing to scoff at – congrats to Michael Stone on his milestone and fantastic night on the ice.
Flashalytic’s 3 Stars –
1) Johnny Gaudreau
2) Jacob Markstrom
3) Michael Stone
The Flames are right back at it 8:30 p.m. MT against the Sharks – who they have yet to beat this season.
(Stats compiled from Naturalstattrick.com // Game Score from Hockeystatcards.com) 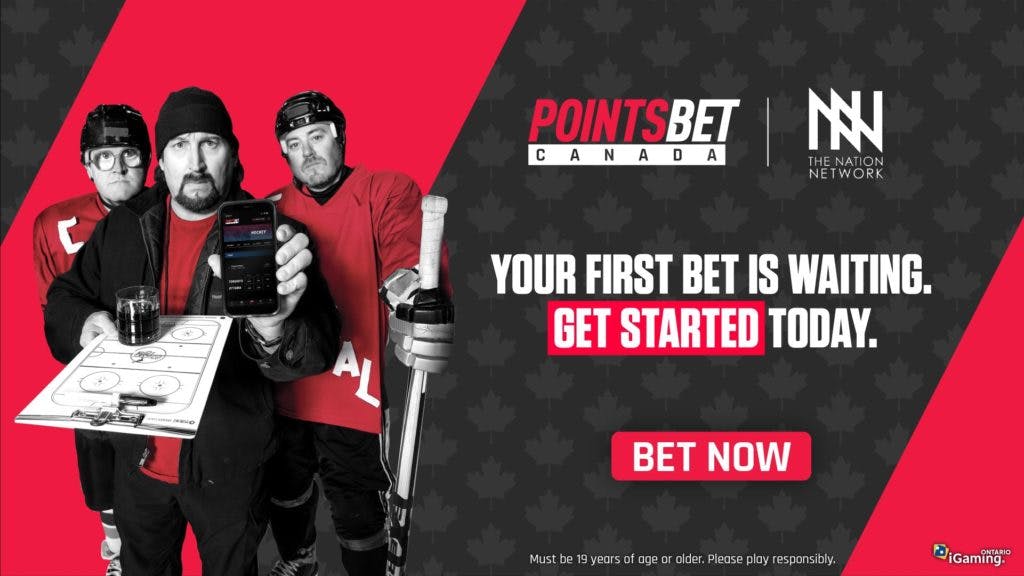