By Shane Stevenson
7 months ago
With a depleted back-end Calgary was able to finally hold their two-goal lead against the San Jose Sharks to seal a victory and claim the two points. The fictional cutoff for playoffs has been 95 points for years now and Calgary achieves that total with this W. Calgary did not come out slow tonight even though they were on a back-to-back and were able to keep that pace up all the way until they iced the game with the empty net goal. A decent effort from most involved mixed with some mistakes from younger players.
CF% – 62.34%, SCF% – 69.88%, HDCF% – 49.53%, xGF% – 64.34%
It’s a Team Game – Calgary struggled at time to get to the front of the net – outside of the Blake Coleman drive that Reimer got hurt on not much attacking from below the goal line took place. It felt like the Flames would end up settling for subpar shots with rebound intentions because they couldn’t find the space to charge the crease. Lindholm’s amazing shot, a Tkachuk breakaway, and a beautiful Trevor Lewis tuck were the goals that went in. All three were goals off the rush – no goals came from established possession on the Flames side.
Corsi King – Rasmus Andersson (73.58 CF%) and Noah Hanifin (72.35%) came through with some absolute clutch play as the only regular defensive pair in the lineup. Milan Lucic (81.09%) led the whole team for the second straight night as well. I think Lucic either found one of those boost mushrooms from Mario Kart or the Sharks were just slow because he appeared to have some extra jets on in this game.
Corsi Clown – Tyler Toffoli (29.62%) had a rough game and his ice time at 5v5 reflects that. Now all three on his line kill penalties but he still came in a full minute behind Backlund (55.79%) and Mangiapane (55.56%). Not going to read into that too much – it just really seemed to not be his night. Dillon Dubé (45.11%) has quieted off after his hot streak, but. Still not playing terribly bad hockey. Still is noticeable out there more than many because his speed puts him in good situations if used properly.
Taken By Chance – The fourth line may have had 23 Corsi events to 6/7 against – but not any of those events were high danger from either side. A straight up wash – no event hockey at its finest (which for a fourth line I love). Mikael Backlund (34.65 SCF% // 0 HDCF%) and Toffoli (26.18% // 0%) had the worst numbers – no high danger chances for either while giving up 4 themselves. This was a win though so I should be positive and mention the top line killed it as well as Lewis (51.36% // 55.93%) and Coleman (58.56% // 55.93%) came in with solid third line efforts. Coleman himself was close to busting out of a slump with a great drive to the net in the third.
xGF% – Elias Lindholm (81.42 xGF%), Matthew Tkachuk (80.80%) and Johnny Gaudreau (75.78%) went to California and swept all three teams for the first time since all these franchises existed (source: Darren Haynes via Twitter). Those three brought whatever was above their A+ format as most nights they were the spark that lit the rest of the team on fire. They spend little to no time in their own zone and if they do get hemmed their they make sure to get the puck out every time. Sportsnet also tweeted out a stat saying they’d connected on goals – all three players – 18 times this season, which leads the league. The empty net goal made it 19, which further adds to these gentlemen’s Flames legacy.
Game Flow –

The Sharks tried to push back a few times but it was never enough to completely overtake the Flames. Calgary ended up having an aggressive attack after the score became 3-2 and because of that the Sharks hardy were able to possess the puck. It took the 6-on-5 for them to gain some significant zone time and they were put away by Johnny Pokecheck at the attacking blueline and Dangles Tkachuk in the attacking zone.
Game Score – The Flames top 5 skaters in terms of lineup were the top 5 skaters in game score and when that happens you typically win. Lindholm (5.13 game // 1/54 average), Andersson (4.88 // 1.15), Tkachuk (4.57 // 1.81), Hanifin (4.44 // 1.07) and Gaudreau (3.20 // 1.89) all dominated in every aspect they could have. Connor Mackey (1.29 // 1.29) debuts with a fantastic effort – he’s earned at least another game.
Shot Heatmap – 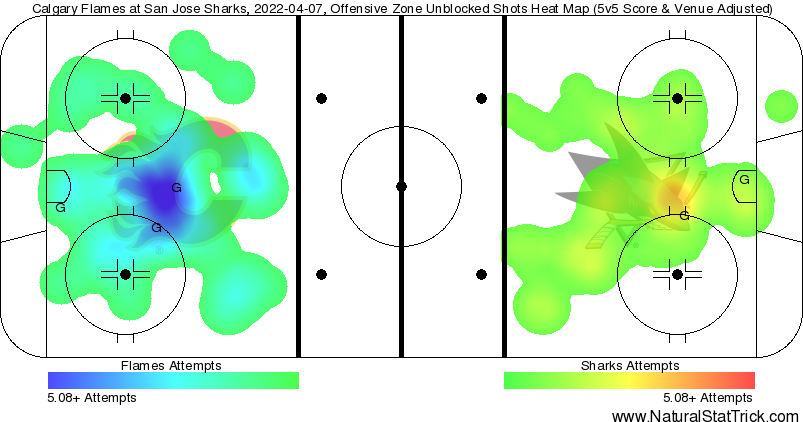 It is nice that Calgary was able to win a game they hardly were able to get to the crease. Those are the efforts where you can play well and still lose in heartbreaking fashion. Calgary has had their fair share of games like this and it’s a real positive sign the latest ones finished as wins.
In The Crease – I would like to start by thanking Darth Vladar for the points in my hockey pool – you came in clutch for me tonight in my playoffs, big guy. He also came up clutch for Calgary quite a few times to keep the score tight. 2.06 expected goals against is – believe it or not – high for what Calgary usually allows in terms of chances. Both pucks that got by him were classified high danger chances. Finished with a 5v5 SV% of 0.929%. 10-5-1 is a pretty darn good record for a rookie goaltender in the NHL.
Today’s Specials – This PK unit has fallen apart. Now granted tonight the were missing a big piece in Gudbranson and Jarnkrok’s speed would be a nice get back – but there are still plenty of PK personnel that have played all year so it shouldn’t have fallen off this bad. The power play is sort of the same – they’ve been largely stationary lately except on the late delay of game PP. I was pumped to see the hustle and urgency from the entire top unit when they sensed they could put the game away. It didn’t end up working but it was a good effort in moving their feet.
Player Spotlight – Mackey-Maki – The two guys from Stockton both get into a game same day. Valimaki himself struggled to exit his own zone properly a few times and it led to sustained pressure by the Sharks – once really bad. Now he had Michael Stone – whose been playing well – but Mackey had Chris Tanev. Mackey himself made simple decisions and played smart defensive hockey, but he also had a defensive rock beside him all night. Sutter said post-game he liked Mackey but the other guys had things to work on yet.
Flashalytic’s 3 Stars –
1) Matthew Tkachuk
2) Noah Hanifin
3) Dan Vladar
The Flames next game is an early Saturday game in Seattle at 5 p.m. MT.
(Stats compiled from Naturalstattrick.com // Game Score from Hockeystatcards.com)