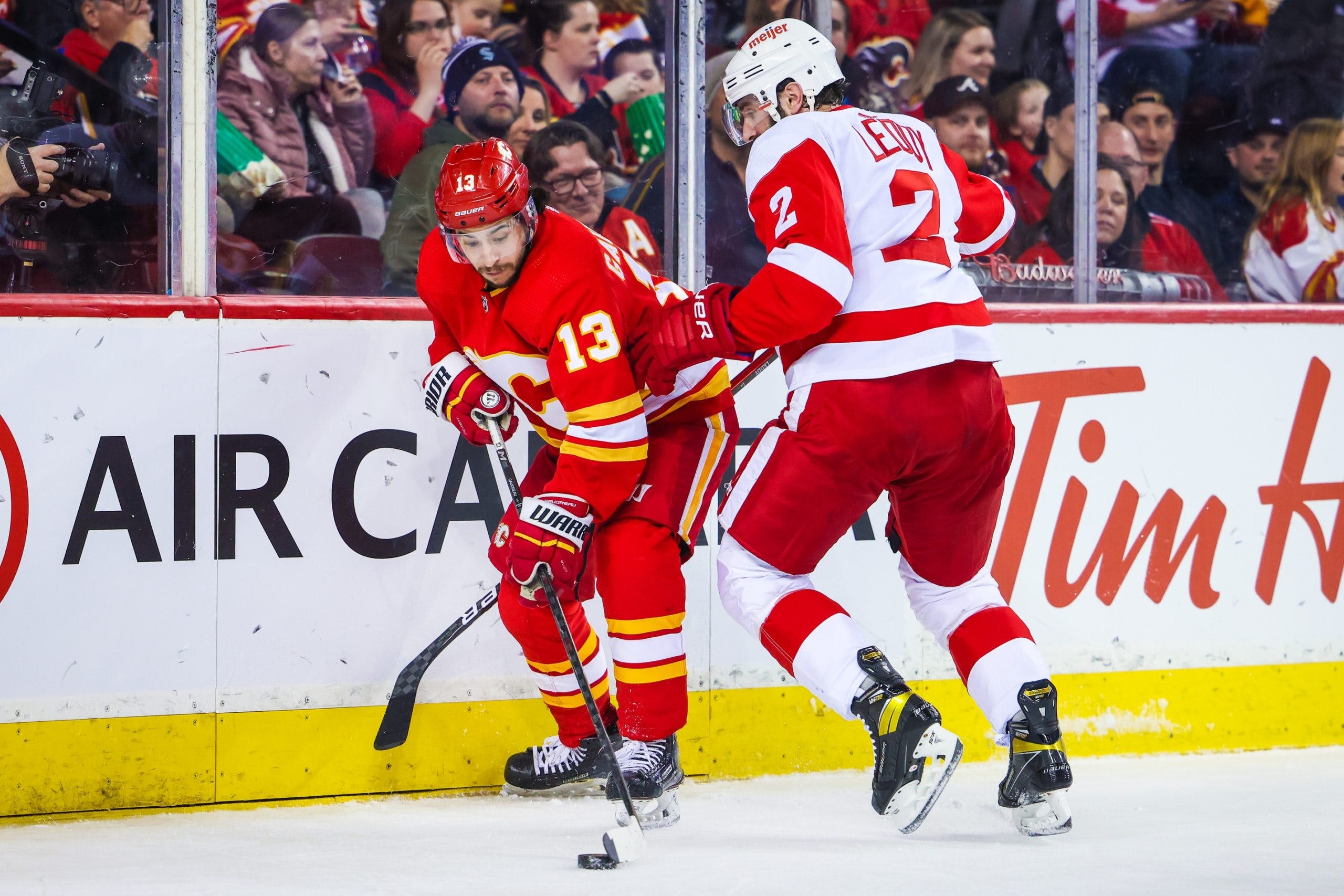 By Shane Stevenson
8 months ago
Someone forgot to tell the Detroit Red Wings that this game started at 5 p.m. because they didn’t show any signs of life until the start of the third period. That was fine though because up until then the score was still just 1-0, not for a lack of chances though. Thomas Greiss was the only reason there wasn’t a multi-goal deficit after both the first and second periods, his team couldn’t even enter the Flames offensive zone let alone get a significant chance off. Flames can win any game any way – hot goaltenders are not something they are about to back away from.
CF% – 64.99%, SCF% – 67.98%, HDCF% – 76.54%, xGF% – 64.4%
It’s a Team Game – Other than the frustration from seeing Calgary create chance after chance and be stone cold stopped by the Red Wings goaler this game was pretty standard for the Flames. Maintain possession – drive the crease – create turnovers in the NZ with a strong backcheck – solid goaltending. They’ve been consistent shift-to-shift in how they play and the intensity no matter what the score. Blake Coleman’s goal was a perfect example of a team wanting to put the hammer down on a team they had taken it to all night. Winners win – they never have time to let anyone else back into it.
Corsi King – Milan Lucic (82.35 CF%) was hard on the forecheck all night long and took care of business when he had to. Givani Smith ended up taking a beating from him after a Monahan (81.85%) hit. Earlier in the game there was a Red Wings player looking to get scrappy – when they looked up and saw it was Lucic the intention to have a scurfuffle went away almost immediately. Nobody is going to go anywhere near the Flames top players with the likes of Lucic AND Gudbranson (82.15%) in the lineup every game. Frees up players like Johnny Gaudreau (51.61%) to work his magic.
Corsi Clown – The only guy that was remotely close to being on the sub-side of the ratios hadn’t played since December – he gets a pass.
Taken By Chance – No Flames player was on the negative side of the high danger chance battle – everyone graded out at even (~50%) or above. Trevor Lewis (69.52 SCF% // 85.58 HDCF%) – Mikael Backlund (64.60% // 85.58%) – Blake Coleman (64.60% // 85.58%) had the most high danger chances of anyone at 5v5 so it was fitting to see them be out there for the only 5v5 goal of the game. It seems blasphemous to say that they had the most high danger chances because the Flames top line would get zone possession and keep it for entire shifts – but that didn’t always result in a quality chance that hit the net (remember it has to hit the net to be counted as a scoring chance – if it misses it just goes into Corsi). The possession is more than welcome – I’ll never complain about that – especially when you’ve possessed it so much through 40 the opposition has 5 shots (one of which was from the other teams own blueline).
xGF% – Highlighting a couple of guys that got scratched lately in Adam Ružička (65.89% xGF%) and Dillon Dubé (67.31%). Ružička got a good compliment from his coach recently who said (and I apologize if I butcher the quote) that when he’s good – he’s good. Now that doesn’t touch on when he has off nights, but the young rookie has the size and offensive noise to turn into a valuable player – and not later either he is going to get an opportunity to help as early as this postseason. Dubé played a decent game using his speed to win plenty of puck races and making smart plays instead of turning the puck over before it gets deep. Both young guys could be huge for Calgary going forward – they’ll get brought along by one of the best coaches the game of hockey has ever seen.
Game Flow –

I’m almost hurt that the mountain of momentum was interrupted by the Red Wings showing up for the start of the third period. It all ended when Toffoli made it 2-0, it was almost like the Red Wings gave up after that goal. The Wings players got a bit feisty as they went after noted disturber *checks notes* Sean Monahan. It was all Calgary for 40 minutes but that lead being only 1 made the game seem closer than the on-ice play dictated.
Game Score – Almost a clean divide amongst the impacts between teams except for Namestnikov for the Red Wings outperforming a few Flames in terms of game score. Chris Tanev (2.51 game // 0.83 average) casually earns the top game score without his regular partner. The guy he did play with holds his stick the other way too so all those little tendencies that come as one builds chemistry with their partner weren’t available, but it did not matter. Michael Stone (1.88 // 0.54) earned his first point of the season on that beautiful backdoor pass Tanev sent to Coleman (1.88 // 0.69). Jacob Markstrom (1.69 // 0.36) is going to get a nice long paragraph here in two sections.
Shot Heatmap – 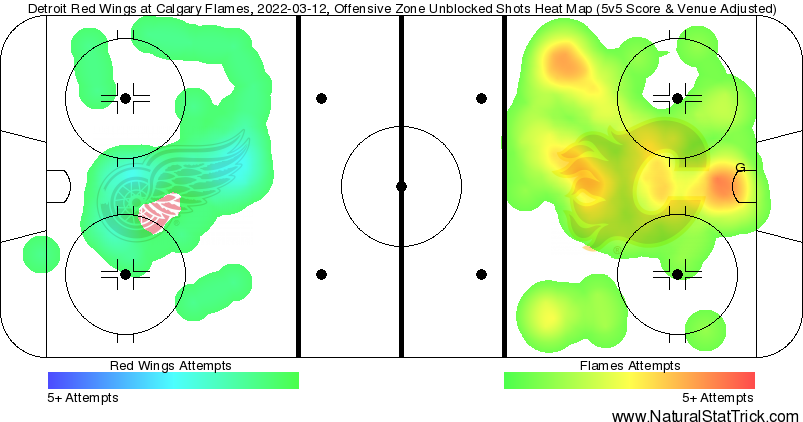 When the goalie is stopping everything start throwing pucks from everywhere. 5v5 the Flames only solved the Wings goaler late in the third which is uncommon for them. Normally they have a higher amount of shots from in tight and less from random areas like above the circles, but every game gets played out differently. Calgary scores more than the PP goal in the first I don’t doubt we would have seen a heavier amount of goalmouth attempts.
In The Crease – It’s hard enough to play the position of goaltender as is – to come out for the third period when you faced maybe one or two dangerous attempts total through 40 minutes and stand strong on some darned good shots is even more impressive. Markstrom basically was able to sleep through 40 minutes and then was the sharpest tool on the ice to start the third period. He is now just one shutout of Kipper’s franchise record and joins a very exclusive club with this achievement.
Today’s Specials – Matthew Tkachuk trying to tuck the puck top shelf on Greiss with Toffoli there – and then less than 15 seconds late coming from the exact same spot and hitting him with the pass for the goal was awesome recognition on his part. You need lots of differing looks to beat goaltenders when they’re running hot and that was a great example of mixing it up. The penalty kill remains a power spot for this team – they know how to defend entries and check their opposition strategically to force turnovers.
Player Spotlight – Tyler Toffoli – Almost every single analyst said the same thing when Toffoli got here – that it was a match made in hockey heaven. 13 points in 13 games is a ridiculous stretch no matter what point a player is at in his career. The Flames were already rolling but now with the added depth they look unbeatable at times. Important to remember though that nobody in that dressing room has a fancy ring decorated in Flames coloured red gems – but they’ve got plenty of guys motivated to get one.
Flashalytic’s 3 Stars –
1) Blake Coleman
2) Chris Tanev
3) Jacob Markstrom
The Flames next game is a powerhouse rematch against the Colorado Avalanche on Sunday at 6 p.m. MT – don’t forget to set your clocks ahead an hour too folks.
(Stats compiled from Naturalstattrick.com // Game Score from Hockeystatcards.com)