Beyond the Boxscore: Calgary Flames use 2nd period surge to propel themselves to victory 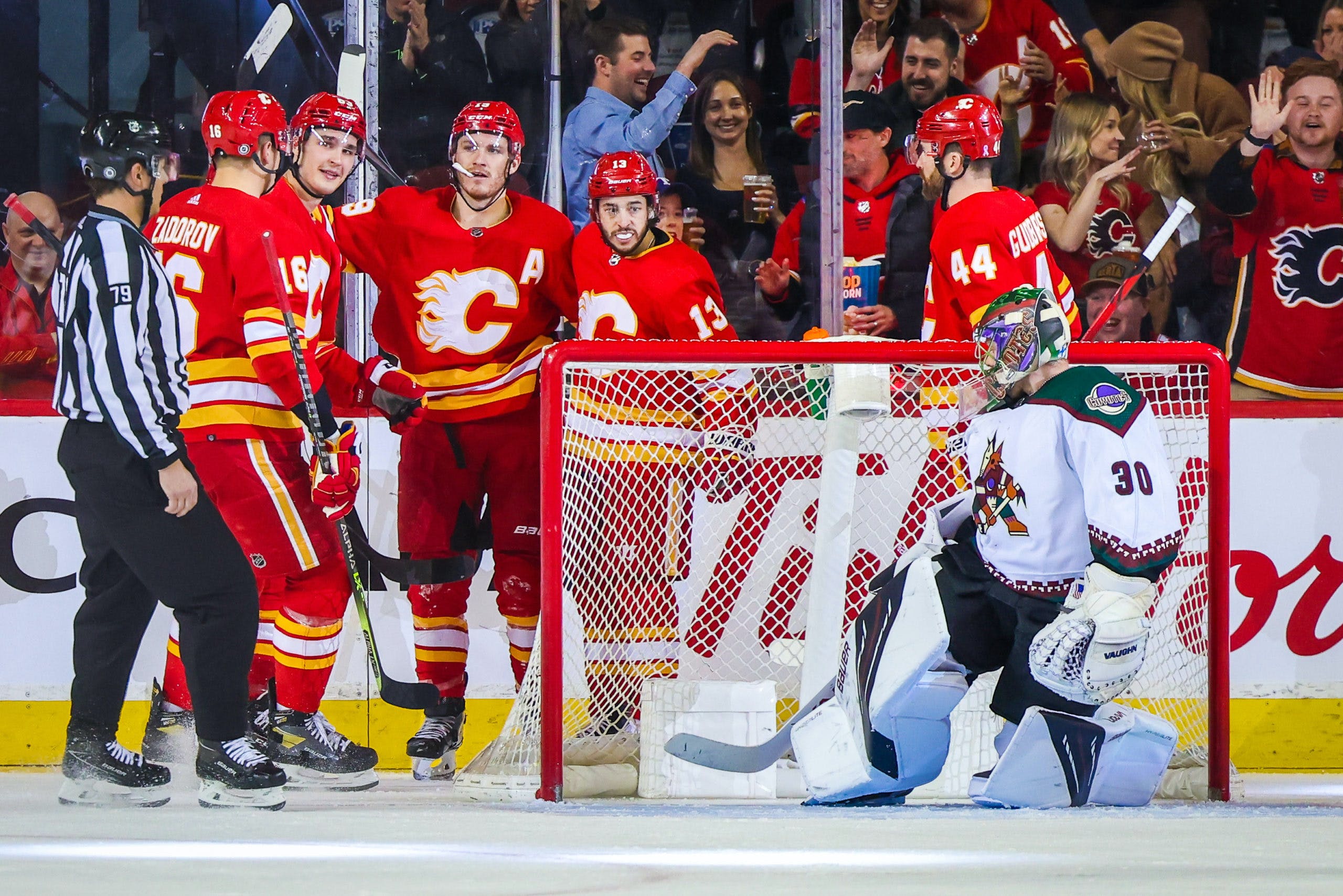 By Shane Stevenson
9 months ago
The switch was flipped at the start of the second period and the Calgary Flames came out playing with more speed in the neutral zone, not messing up their breakout, and took advantage of some weak Arizona Coyotes goaltending performance. It was important to note that while yes – the Flames had clinched because of an Oilers win earlier in the day – the result of that game would not have mattered because Calgary won themselves in on the same day. A big difference from years past where Calgary had seemingly gone into the playoffs not being at the top of their games. The Flames are in the playoffs – for now they have on Monday to prepare for.
CF% – 64.15%, SCF% – 57.33%, HDCF% – 50.73%, xGF% – 53.8%
It’s a Team Game – Winning the game is what matters, but I’m sure if you asked every player how the game went, they would touch on that less than stellar first period. Ignoring the goal right out of the gates Calgary just appeared trapped again like they did against Vegas and at times against Seattle. Times when their breakout seemed to always fail and they couldn’t buy a ticket through the neutral zone. All that ended for the most part at the start of this second period, but it’s worth remembering if that start had happened against Tampa Bay in a playoff series you probably don’t end up with a win.
Corsi King – Blake Coleman (85.15 CF%) was on the right side of the puck for most of the night. His goal was a goal scorers’ goal, finding the short side net on a goaltender that was looking right at him. Calle Jarnkrok (82.50%) and Dillon Dubé (81.53%) also finished high as Dubé and his speed have become a fairly consistent threat as of late. Good to have it now, better to make sure it’s present in a couple weeks too.
Corsi Clown – There will be nobody here tonight as the lowest player was still above 50%.
Taken By Chance – The high danger chances are where you can see that Calgary did have some struggles tonight – even in a 9-1 win. Over 10 different players saw 4 or more high danger chances while deployed. Giving up worse numbers in good looks than you can get in bad looks is not a recipe for success most nights. Calle Jarnkrok (70.38 SCF% // 80.39 HDCF%) led everyone for forwards, Nikita Zadorov (73.19% // 78.11%) for defencemen. Chris Tanev (51.13% // 58.11%) and Oliver Kylington (49.91% // 48.55%) finished in the mid-range mark for the Calgary blue line last night.
xGF% – Haven’t had to talk about the big boys yet so I’ll give them a spot here. Always consistent in Johnny Gaudreau (71.25 xGF%) who is playing well even when the team has a night off of late. Elias Lindholm (58.36%) is a line one center that’s going to score 40 goals in one season. Matthew Tkachuk (66.27%) is a very high IQ player who can physically dominate possession down low in the attacking zone. All three together create a massively dangerous line offensively while having the players take care of defence first.
Game Flow – 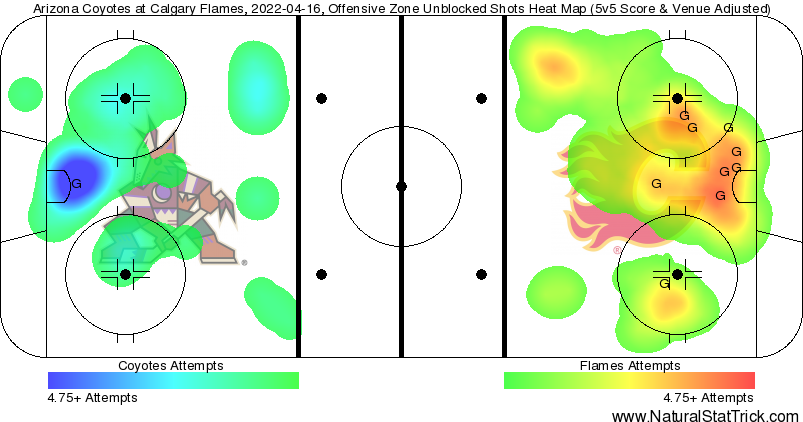 Nine 5v5 goals – for the second time this year.
In The Crease – Busier than you might think because the score was 9-1, but Markstrom faced 2.47 expected goals last night. 9 high danger attempts and he only let an early Nick Ritchie tip get by – a tip/shot his defenceman should have had covered if he was in the right position. 0.958 5v5 SV% for Markstrom who gets back in and gets a full game completed. They’ve qualified too so I see maybe a bit more Vladar in the next two of three games before they ramp Markstrom back. I’m speculating on that but will watch and see.
Today’s Specials – You want to know what an absolutely amazing accomplishment is? Two games in a single season where you score 9 goals all at 5v5. They did it against Edmonton and now against Arizona. So, the power plays went scoreless but the seventh one was just after the PP expired. Only one dangerous attempt by the Coyotes on their two power plays combined.
Player Spotlight – Blake Coleman – We talk about being ready for playoffs and having Coleman on this team will help. He was brought in for his defensive play yes, but his championship pedigree and reputation are what got him the kind of money he gets paid and the term. The recent playoff success he brings and his daily mentality on the ice for games will go a long way. If he can start seeing the goals go in too that would be a bonus.
Flashalytic’s 3 Stars –
1) Matthew Tkachuk
2) Johnny Gaudreau
3) Jacob Markstrom
The Flames will play Monday in Chicago against the Blackhawks at 6 p.m. MT.
(Stats compiled from Naturalstattrick.com // Game Score from Hockeystatcards.com)