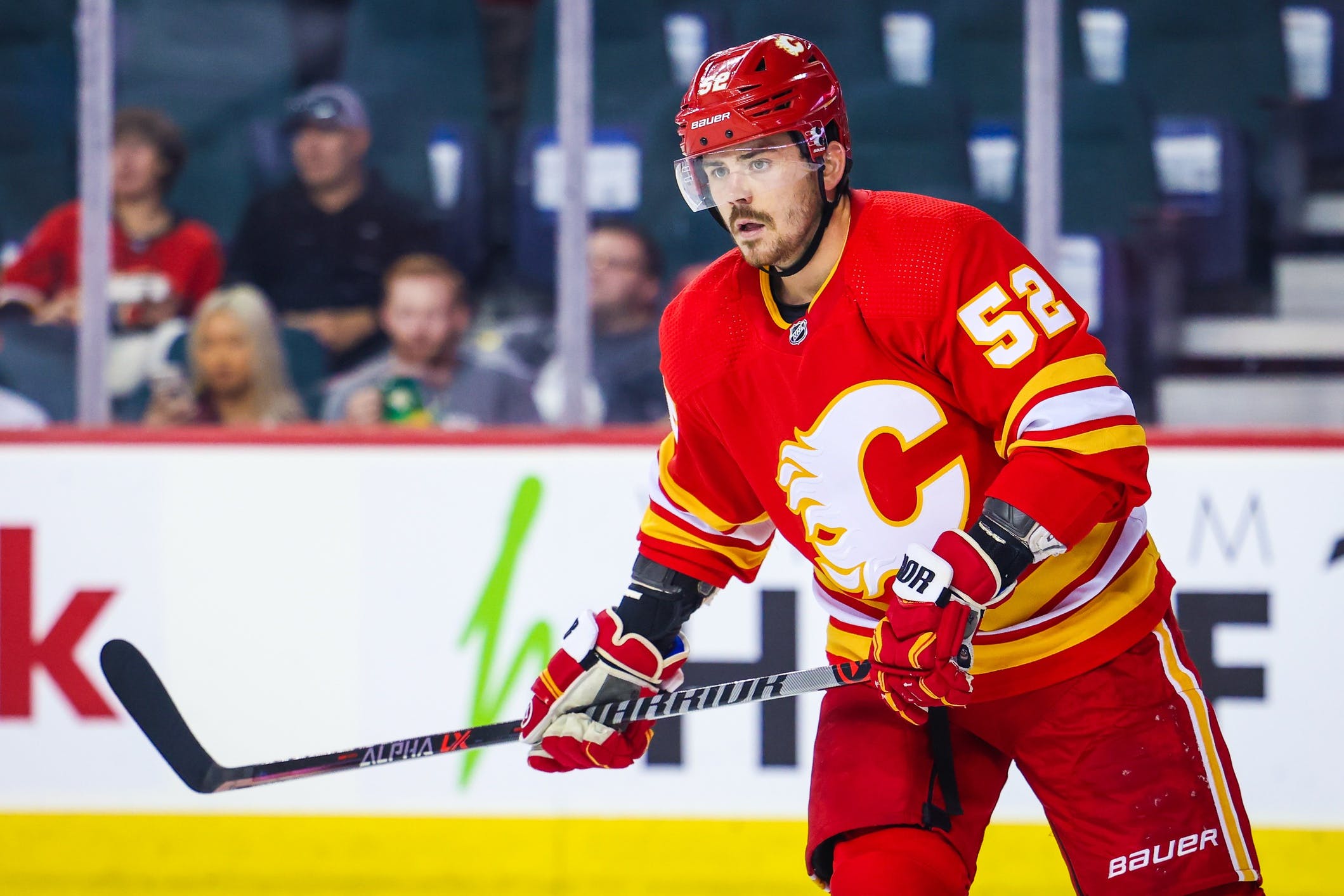 By Shane Stevenson
2 months ago
Welcome back one and all to Beyond the Boxscore: Season 2 –  a place to find out which Flames players had statistically great nights combined with some insight into what was working or not by myself (Shane Stevenson – @Flash_33 on Twitter). We’ll have charts, video breakdowns, colour commentary, and plenty of in-depth analysis.
The score may have been lopsided, but it wasn’t a particularly bad game for Calgary. They certainly did not get the dangerous chances they did for the most of last year, but they countered that with the best limitation of dangerous chances at 5v5 we’ve seen in the pre-season. Some nights everything the opponent shoots goes in the net – at least it was before the games actually counted. Lets dive in and look at which individuals thrived and which ones, well, didn’t.
CF% – 53.52%, SCF% – 50.74%, HDCF% – 43.65%, xGF% – 45.88%
It’s a Team Game – Calgary won the overall possession game, but really failed to connect on their passes all night long. There were a couple moments we saw a strong drive to the net (Noah Hanifin, Nazem Kadri, Andrew Mangiapane) but it wasn’t as often as it needs to be to find success. Last BTB I mentioned it might take time to find chemistry – I’ll echo it again in this version. The one positive in my mind is every time in the last 2 years Darryl has had 4 days to practice with his squad they’ve come out and played like their lives depended on it. With 6 days until the opening of the regular season – and the roster limit needing to be ready on Sunday – I have faith the NHL squad will be able to start strong.
Corsi King – Can I get a resounding chorus of “Looooooo” going as you read this – Milan Lucic (81.32 CF%) led for Calgary with Trevor Lewis (80.82%) just behind. All four of the top defencemen pitched a quality start with Noah Hanifin (72.18%) and partner Rasmus Andersson (70.90%) finishing ahead of MacKenzie Weegar (62.92%) and Chris Tanev (54.18%). If we round Mangiapane (49.46%) up to 50 because it may as well have been then only 5 skaters finished with below 50%.
Corsi Clown – It was a rough go for Nikita Zadorov (26.23%) who found himself barraged consistently. Partner Connor Mackey (34.21%) broke that steady stream he had in camp to date with a struggling outing himself. They weren’t able to find themselves in the offensive zone too often. Zadorov being the only Flame on for two 5v5 goals against.
Under Pressure – 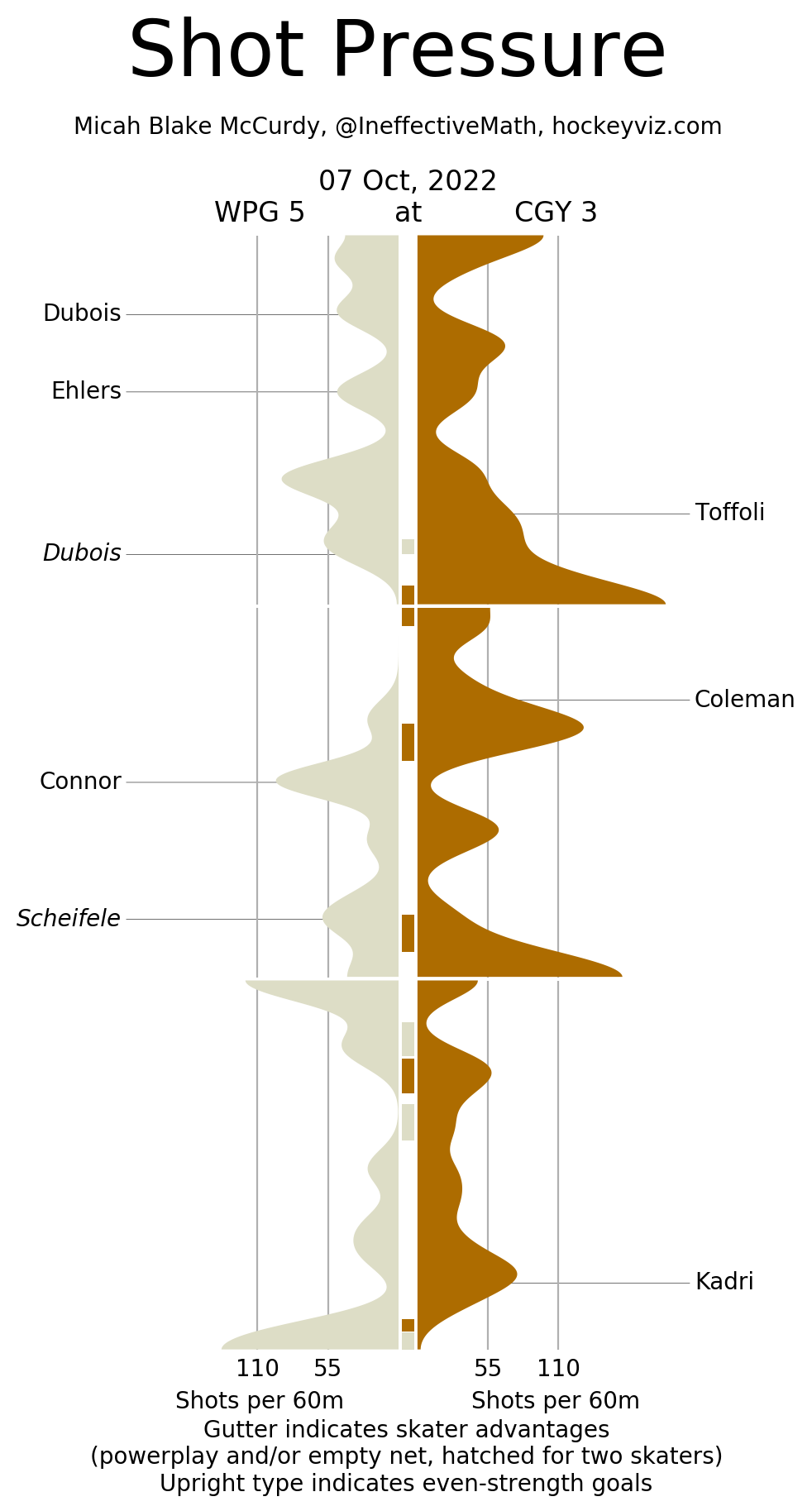 The Jets were really opportunistic early – getting goals whenever they were able to mount even the slightest build up of pressure. Then there’s the Flames who have massive spikes yet couldn’t beat a game of pong set to beginner. Part of that was a strong performance by Hellebuyck, part was not enough of an effort to really get into the Jets crease. Rick Bowness teams do defend well though, so kudos to them for executing.
Taken By Chance – Let me clarify before someone misconstrues my words – the Tyler Toffoli (50.90 SCF% // 42.63 HDCF%) goal was gorgeous. By shot metrics though it wasn’t considered high danger because of the distance of the shot from the net. So, Jonathan Huberdeau (34.36% // 0%) and Elias Lindholm (34.36% // 0%) didn’t get classified with any high danger opportunities. Beautiful spin move by Huberdeau to find open space in the neutral zone and start that whole rush – his talent level on full display. Huberdeau and Lindholm are two of those that very clearly still have chemistry issues to work through. On the flip side the second line continues to be fantastic centered by Nazem Kadri (44.19% // 70.84%) with Dillon Dubé (47.92% // 54.85%) looking like a perfect flank for him. Personally the combination of Dubé and Kadri has been the best of the skaters in training camp.
xG Breakdown – 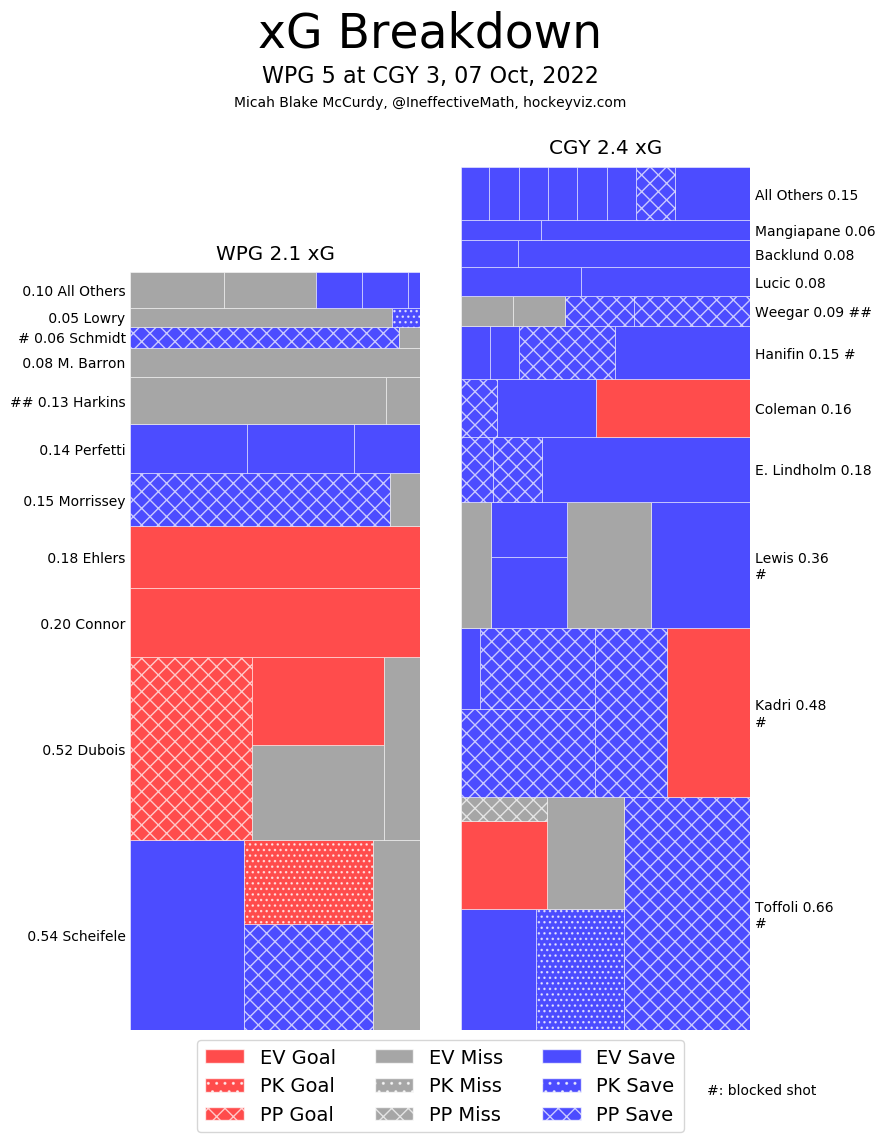 It was great to see Tyler Toffoli go off after hearing all that noise about him during the preseason. Every game Kadri plays he ends up highly noticeable on these as well.
xGF% – One of my favourite things I get to do when I watch live is track Mikael Backlund (53.22 xG%) all over the ice. On the broadcast the camera cuts him off a lot but in person you get to really see how much ice he covers every shift. He finds so much defensive success because he is never standing still, ever. If you want to teach kids how to play centre – have them watch Mikael Backlund. Everyone involved will be better for it.
Game Flow –

Calgary never got a strong push of quality shots until right at the very end trying to crawl back into it. There were steady streams throughout where they controlled play, but in the end shenanigans took over and a few guys got removed. Pre-season games against the Jets get violent pretty much always – maybe the two should take next year off.
Shot Heatmap – 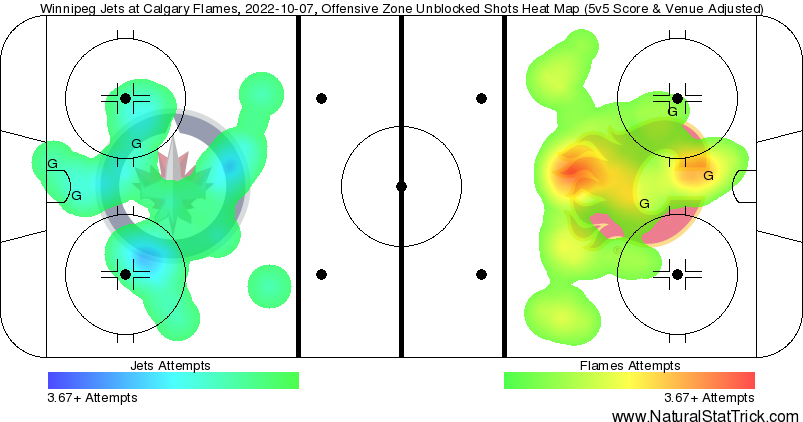 I have all 8 preseason games of these saved on my computer and this is one of the best defensively and one of the worst offensively. The first Dubois goal stung because Mackey made the read and was there to cover him – PLD just overpowered on his way to the deflection/redirect.
In The Crease – While I don’t think even the fastest man alive could have stopped that shot from Kyle Conner he had a good 3 seconds to get it off if he wanted to wait. The Nik Ehlers bank-in goal though – I’m just glad it gets wiped from the ledger after tonight. It wasn’t a great goaltending performance, It wouldn’t do much service to lie to everyone. Do I think the guy that finished second in Vezina voting last year is going to be fine – yes. 1.40 expected goals against at 5v5 with 3 goals (all classified as high danger) beating him.
Today’s Specials – Work on your power play. When you’re done working on your power play work on it some more. Faster puck movement and more physical movement please. NHL defenders can read passing lanes pretty darn good – it’s even easier for them when the player is practically standing still. Move those feet and open up more lanes.
Player Spotlight – MacKenzie Weegar – Get used to hearing his name Flames fans, he’s just signed an 8 year $6.25 million AAV contract to remain a Calgary Flame. All pre-season he’s been the most versatile D and as consistent as advertised. He won’t be required to play as much as Florida because of the talent spread out across the Flames D group, but he’s there if needed. A more rested Weegar can most certainly be projected to be an even better Weegar, which is saying something because he’s already one of the better ones out there. What a trade Brad Treliving, just wow. (#SummerOfBrad!)
The Goals –
Flashalytic’s 3 Stars –
1) Tyler Toffoli
2) Noah Hanifin
3) MacKenzie Weegar
The Flames open their regular season at home on Thursday against the defending Stanley Cup champion Colorado Avalanche. 7:30 p.m. MT puck drop – set your dials. They are back!
Speaking of being back, don’t forget to tune into the all-new Barn Burner podcast featuring Dean “Boomer” Molberg, Ryan “Pinder” Pinder, and former Flame Rhett Warrener, weekdays from 10:30 a.m. to noon on YouTube, Facebook and Twitter, and podcasted afterwards for your listening convenience.
There’s lots of songs about love out there, but there’s only one about the boys being back in town.
(Stats compiled from Naturalstattrick.com // Game Score from Hockeystatcards.com // xG and Under Pressure charts from HockeyViz.com // Game Flow and Shot Heatmap from NaturalStatTrick.com)
News
Recent articles from Shane Stevenson