Beyond the Boxscore: Calgary takes advantage of the Dallas Stars backup goalie in high scoring affair 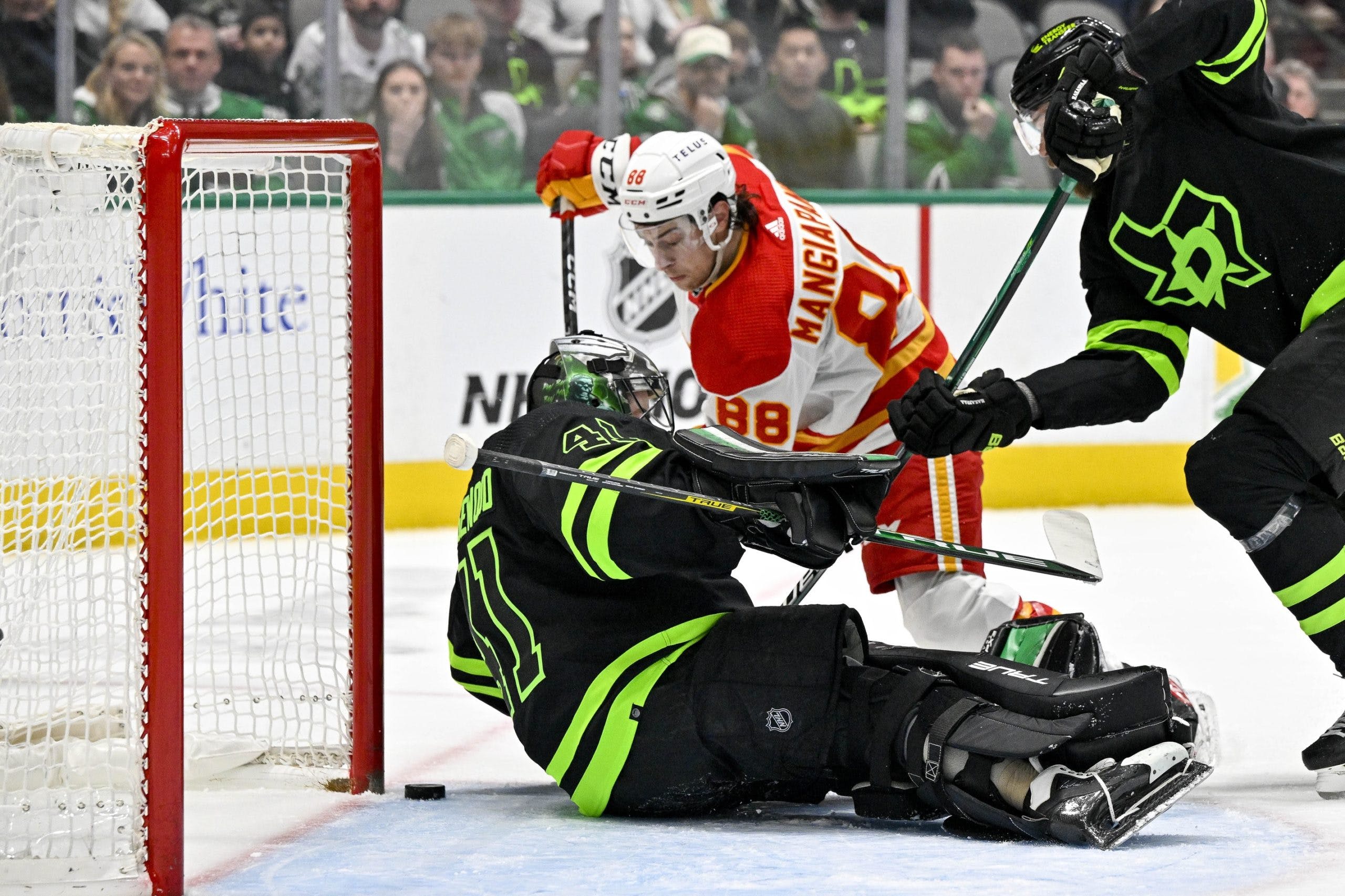 By Shane Stevenson
12 days ago
After starting the road trip against teams on the outside of the playoff picture looking in the Calgary Flames headed to Texas to take on the highly skilled Dallas Stars. Dallas was missing their number 1C in Roope Hintz, giving Calgary an advantage and were also spared from having to play Jake Oettinger as it was his designated day off. The end result was a bunch of goals for Calgary before the Stars woke themselves up and tried to mount an epic comeback.
They failed and Calgary’s trip now stands at 2-0-2 with just Nashville to go.
CF% – 57.67%, SCF% – 50.02%, HDCF% – 56.87%, xGF% – 58.24%
It’s a Team Game – Now nobody is going to believe me when I say this because of all the goals, but this game was fairly low-event for high danger chances. There were plenty of mid-range shots from the Stars, but Calgary found great success from their point shots. Wedgewood lost the right side of his net in the second period and it got Andersson and Tanev their goals. It was not a perfect game, but one I’m okay with the performance. A bit lucky on the night they collapse for 5 against they already had 6 in the bank.
Corsi King – Trevor Lewis (72.18%) got some big compliments from the coach this week for always being consistent even while playing with younger more inexperienced pros like Ruzicka (64.77%) and Duehr (69.40%). Duehr himself has 3 very positive impact games next to these two and is showing he can provide a regular impact nightly if they need him. Dillon Dubé (60.98%) and his line made a decent impact. You’ll find for CF% the Flames don’t often finish too bad, it is directly caused from them having such a high shot volume of low % chances.
Corsi Clown – Jonathan Huberdeau (48.37%) and Milan Lucic (48.82%) just marginally below half but still 2% up from the bar I set for one-off games. Kadri (52.17%) found a way to scrape together 3 more attempts than his linemates and that’s all the ones down low.
Under Pressure – 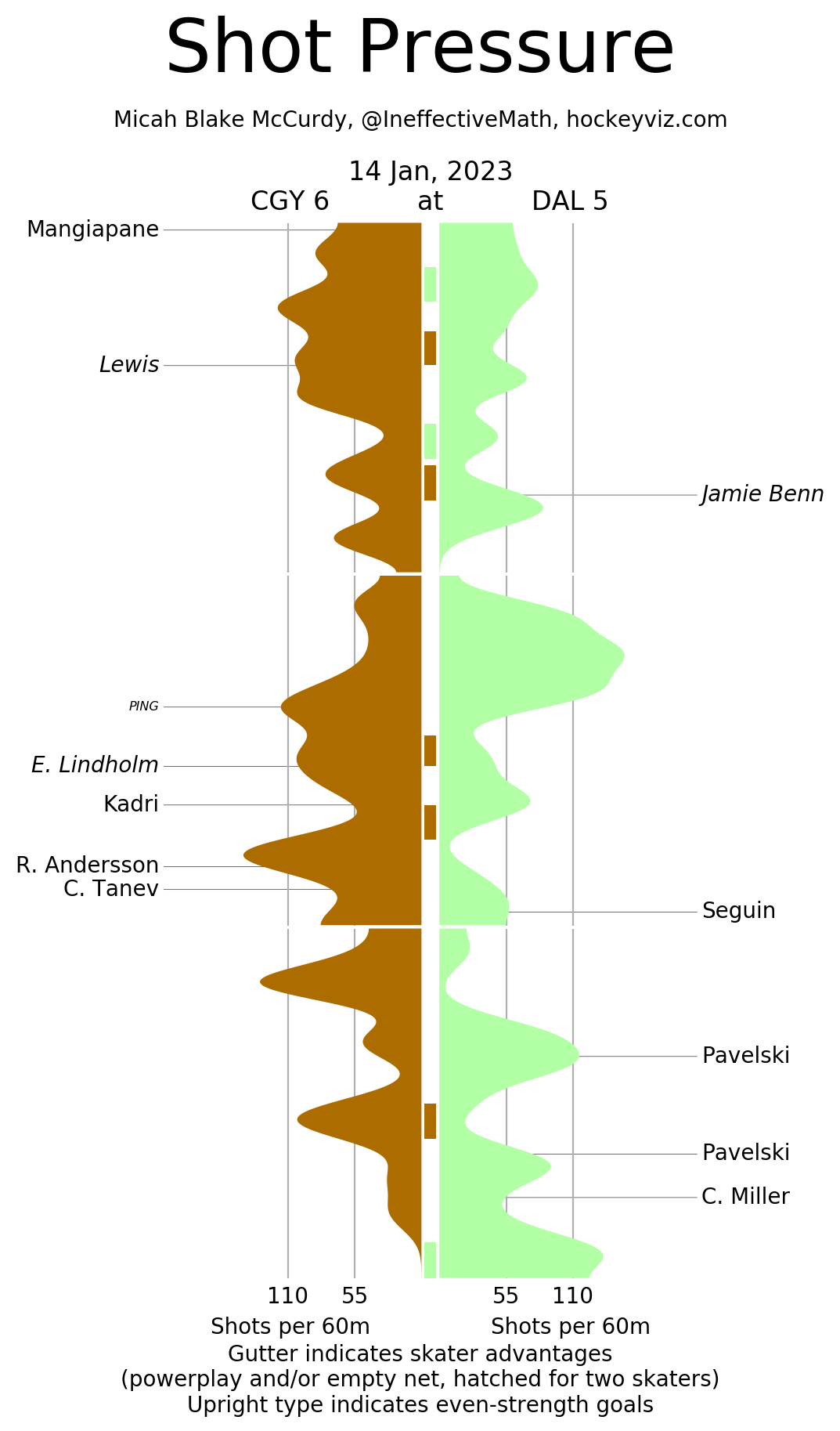 Taken By Chance – So while CF% is all positive we do have some polarizations in the high danger chance ratios. Lucic and Huberdeau both finished without being involved in a high danger chance 5v5. This is where people are going to point to his two assists but those two goals came from well back of the crease and a goaltender on his game should have made all of those saves. Flip the switch to see in under 8 minutes of 5v5 time (Ružička only got 6:10 – he needs more minutes) the 4th line all got over 3 high danger chances and saw none come back their way. Kudos to all 6 defencemen for showing up on a game where they needed that as well. Pavelski is destined to destroy the Flames through endless flurries of goals anyways – there is nothing you can do to get out of the way of that smoke.
xG Breakdown – 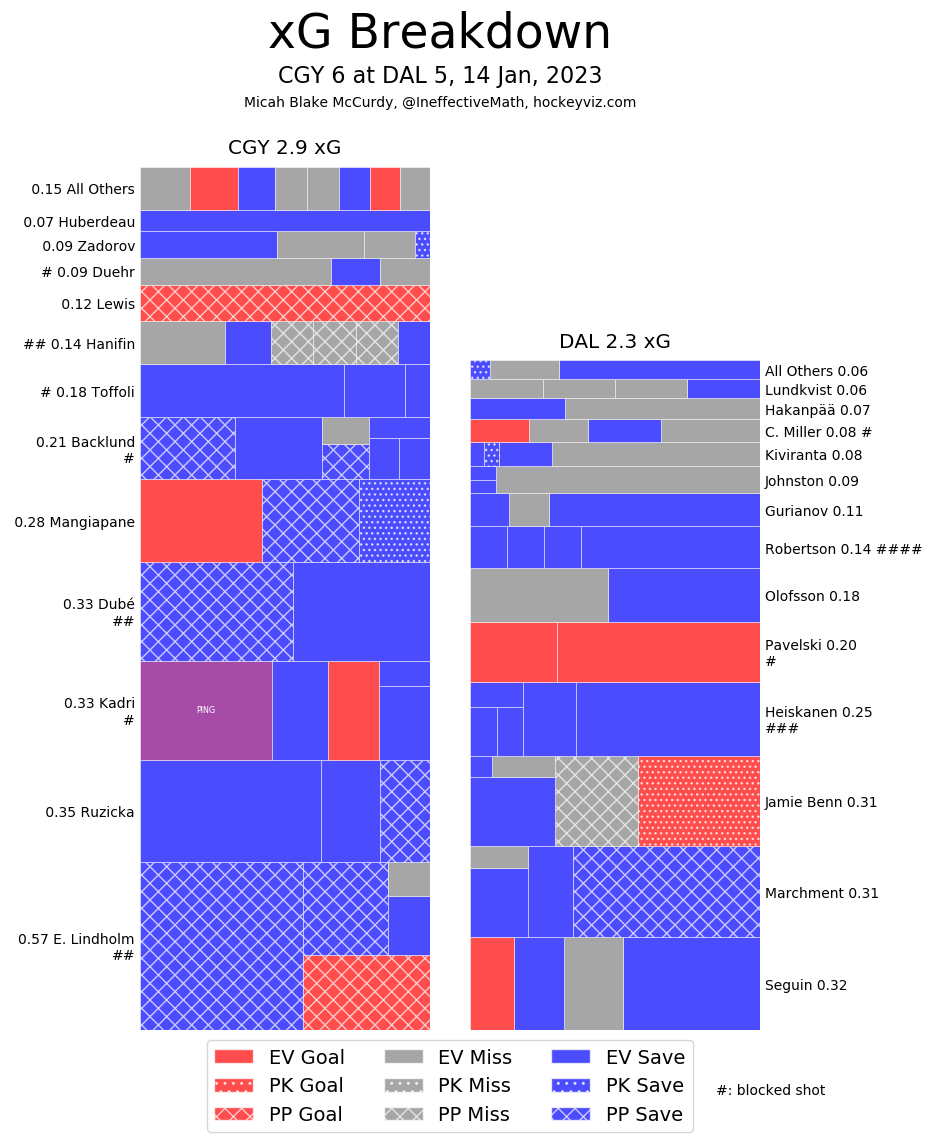 xGF% – Last year quality share was a great indicator of how the Flames played – this year due to their distanced shot volume it’s impact for evaluation is a bit less. The volume skews everything – I get the old cliché get puck on net, but I fundamentally believe in always trying to make a crease/lower slot a priority. Sometimes you have to pivot due to injuries or current score, but the attack should still focus on highly dangerous chances and not hoping the tips bounce your way. This game was none of that – pretty well summed up by a bad Wedgewood performance. Fans waiting for that one subpar performance as an excuse to move Lucic (39.09%) off the second line can rejoice. It was a stretch of 4 good games before this one – how things play out in Nashville Tuesday will either extend those looks or determine if they get changed.
Game Flow – 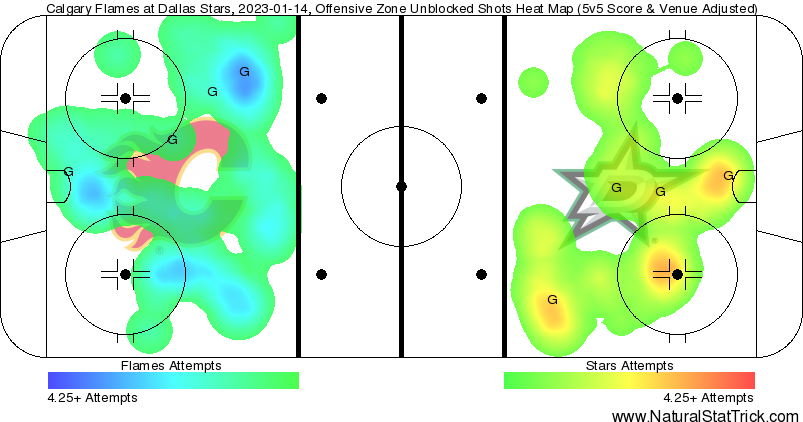 In The Crease – I diss one cliché above this but then bring another one back for Dan – a wins a win, right? 1.66 expected goals against with 4 goals getting by him 5v5 – one high danger, two medium danger, and the killer in one low danger against. That kind of performance typically ends with a Flames loss, but Wedgewood decided to let two low danger goals in himself. I stand by that if Oettinger had played the Stars probably win this – but he didn’t and Calgary gets the 2 points.
Today’s Specials – Okay so even the coach is now calling out his first power play and some of the guys on it: at what point is it no longer the players fault and that of the way they are told to play it? Online in the Flames world there was a huge debate about this when Geoff Ward was the coach. Lots were saying that they had cycled through enough coaches and that lack of regular production was on the roster – others pointed to the passiveness of Ward’s system saying it didn’t benefit the roster. I’m not blaming the players in this case – I think they need to change up their point of attack from being at the blueline to the half wall (or better yet run it from behind the net/corner) – and that 5-man unit could use a shake-up too. The power play should be running a high positive percentage impact and instead when Calgary gets a power play they’re running at -4% offence (via HockeyViz.com)
Unacceptable – especially for a team that usually struggles to find that one extra goal.
Player Spotlight – Dillon Dubé – He is still the guy on the NHL roster with the most potential and he’s also currently getting to do it in a prime role. He’s got a first line job in the NHL and has had it for over 2 weeks now and is getting the praise for doing the hard things right. I still want to see him charge the net more, but he’s picking his spots better. Instead of trying to force the net and possibly lose the puck he’ll read the play and spin back to try and establish a possessive attack rather than just off the rush. It’s the safe version that leads to more Flames possession and as such less of an opposite attack. That being said – I still want to see those net drives like we did in the bubble. Sometimes it’s worth the drive to the net over the safe play – it’s about learning when and where to do that and Dubé is taking a big step in that aspect of his game.
The Goals –
Flashalytic’s 3 Stars –
1) Chris Tanev
2) Tyler Toffoli
3) Rasmus Andersson
(Stats compiled from Naturalstattrick.com // Game Score from Hockeystatcards.com // xG and Under Pressure charts from HockeyViz.com // Game Flow and Shot Heatmap from NaturalStatTrick.com)
Editorials
Recent articles from Shane Stevenson