Beyond the Boxscore: Flames fall to Oilers as Skinner shines 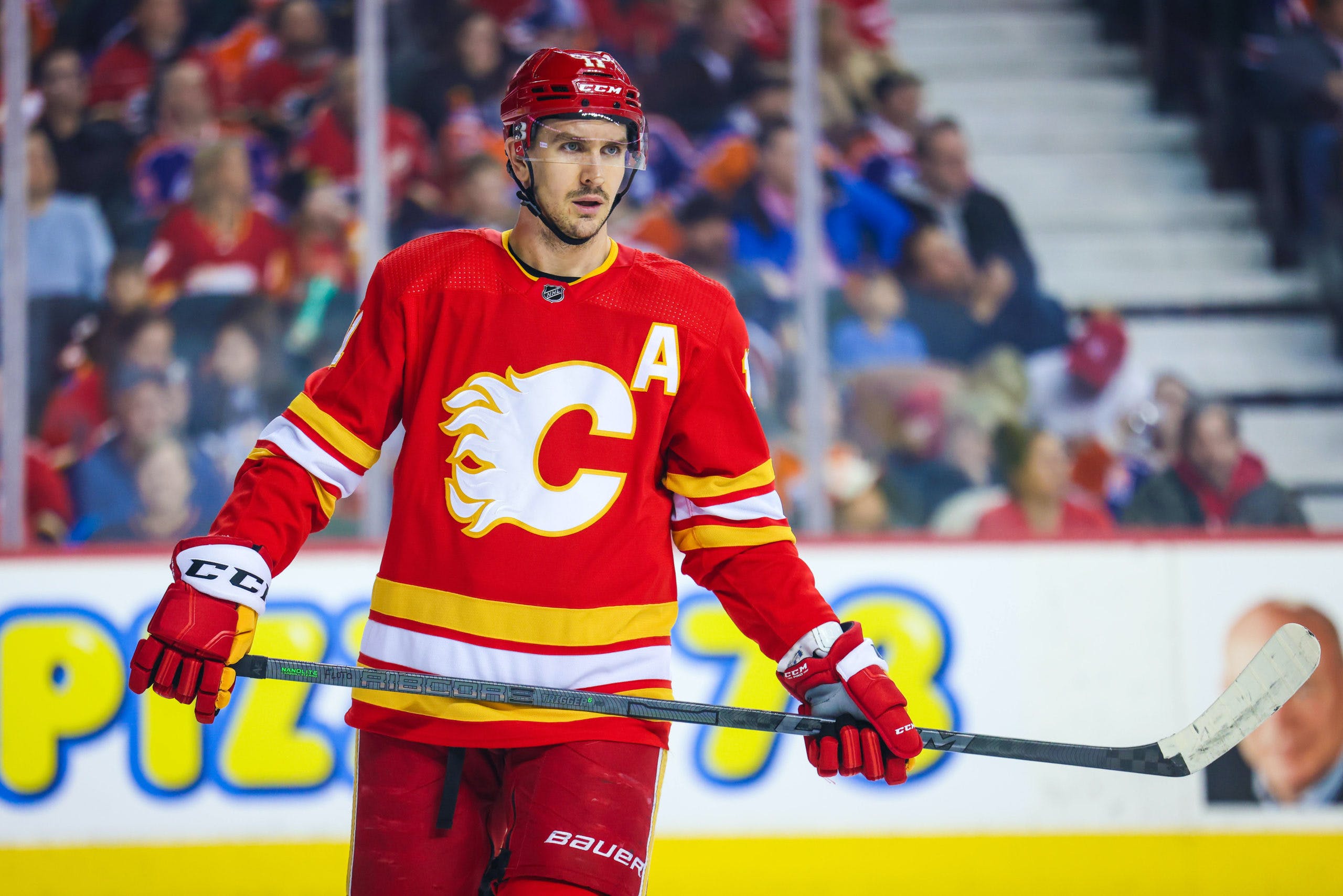 By Shane Stevenson
29 days ago
This was a game that from the drop of the puck was in the Calgary Flames control, the outcome though was all dictated by the Edmonton Oilers young goaler Stuart Skinner. Across the board by every metric Calgary was leading and lead every single period. They fell victim to the same problem they have had all year – a lack of ability to finish. It was well defended and definitely a game you can point back to as one where everyone was predominantly on the same page. We saw Calgary pass the puck better than they have all year despite the losing outcome.
Also… I have just about had it with all the posts – it’s been a ridiculous amount.
CF% – 73.89%, SCF% – 70.74%, HDCF% – 69.84%, xGF% – 76.02%
It’s a Team Game – Edmonton couldn’t stop Calgary from bringing a wave after wave of quality attacking chances – the peoples whose sticks the puck kept landing on would fire off an opportunity, but it wasn’t what I would call a lethal shot. This game is a blueprint for what to do in terms of the process, it is highly unfortunate that it was a regulation loss. Hate to say it though, but if you take penalties against McDavid, you can’t be surprised when he torches you.
Corsi King – Adam Ružička (82.64%) is constantly creating chances out of nothing. This game specifically he stood out as a play driver – entering the zone with possession, forcing turnovers with a high pressure forecheck, and letting off quick shot opportunities while he is in the dangerous areas of the ice. He simply needs more ice time and better linemates that he can complement to get some tangible goals. The lowest flame finished with a 14-7 advantage in Brett Ritchie (65.96%).
Corsi Clown – Not a chance – the Flames really did dominate this result is a crime.
Under Pressure – 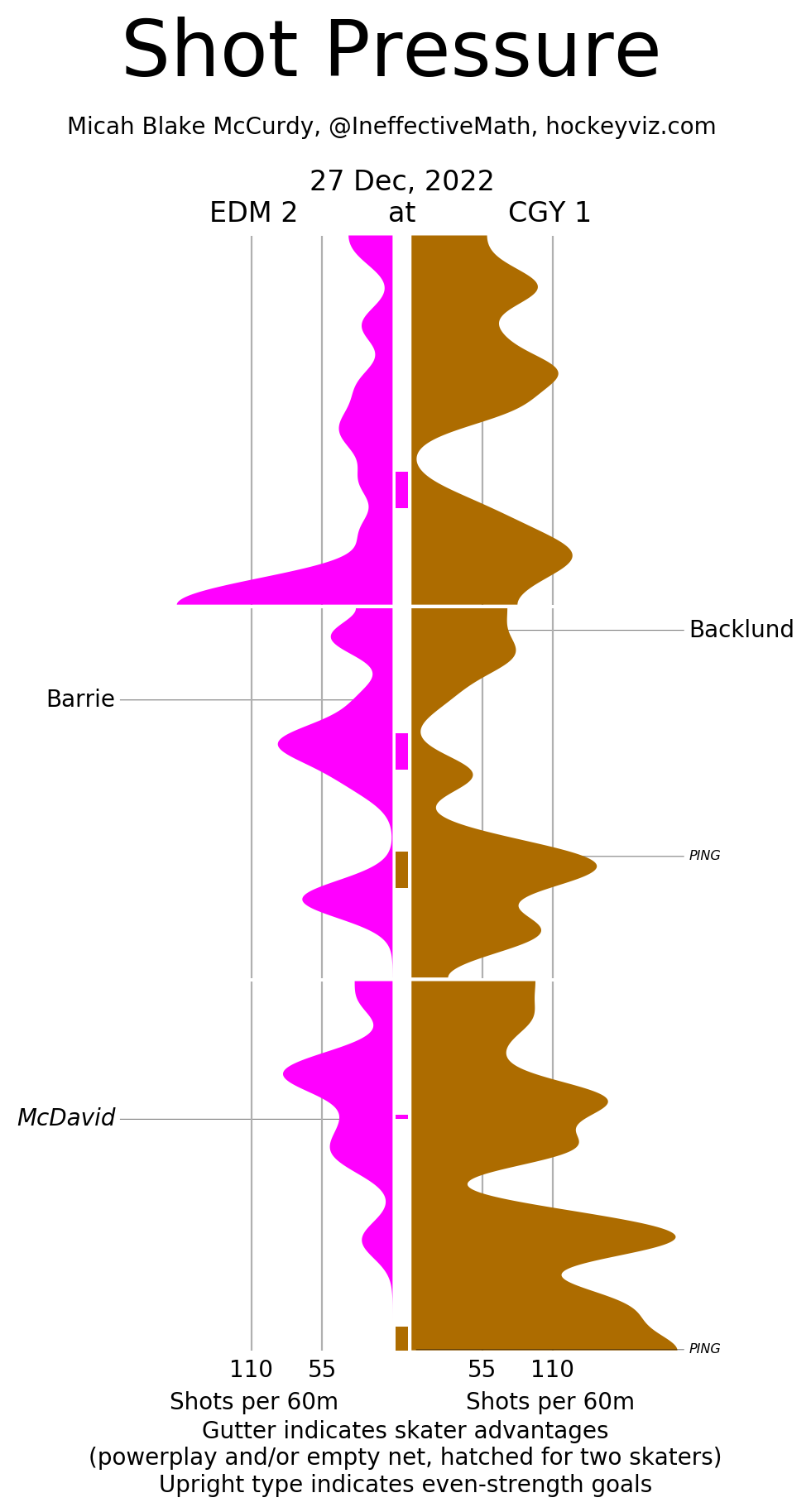 Taken By Chance – Every single Flame finished above 50% for high danger chance ratios. nobody lost their 5v5 match-ups – it was nothing but Calgary. The biggest disparities came from Hanifin (76.47 SCF% // 86 HDCF%) and Andersson (72.68% // 86%) as they saw over 6 high danger looks while seeing only 1 against. On the front lines the goal scorer in Backlund (74.42% // 83.91%) led with Milan Lucic (79.24% // 81.27%) just behind. Just because you get the opportunity in the dangerous areas does not mean the shot choice was optimal. Based on how this game went I wouldn’t touch or adjust the lines, they’ve been working well the players themselves need to start executing around the net.
xG Breakdown – 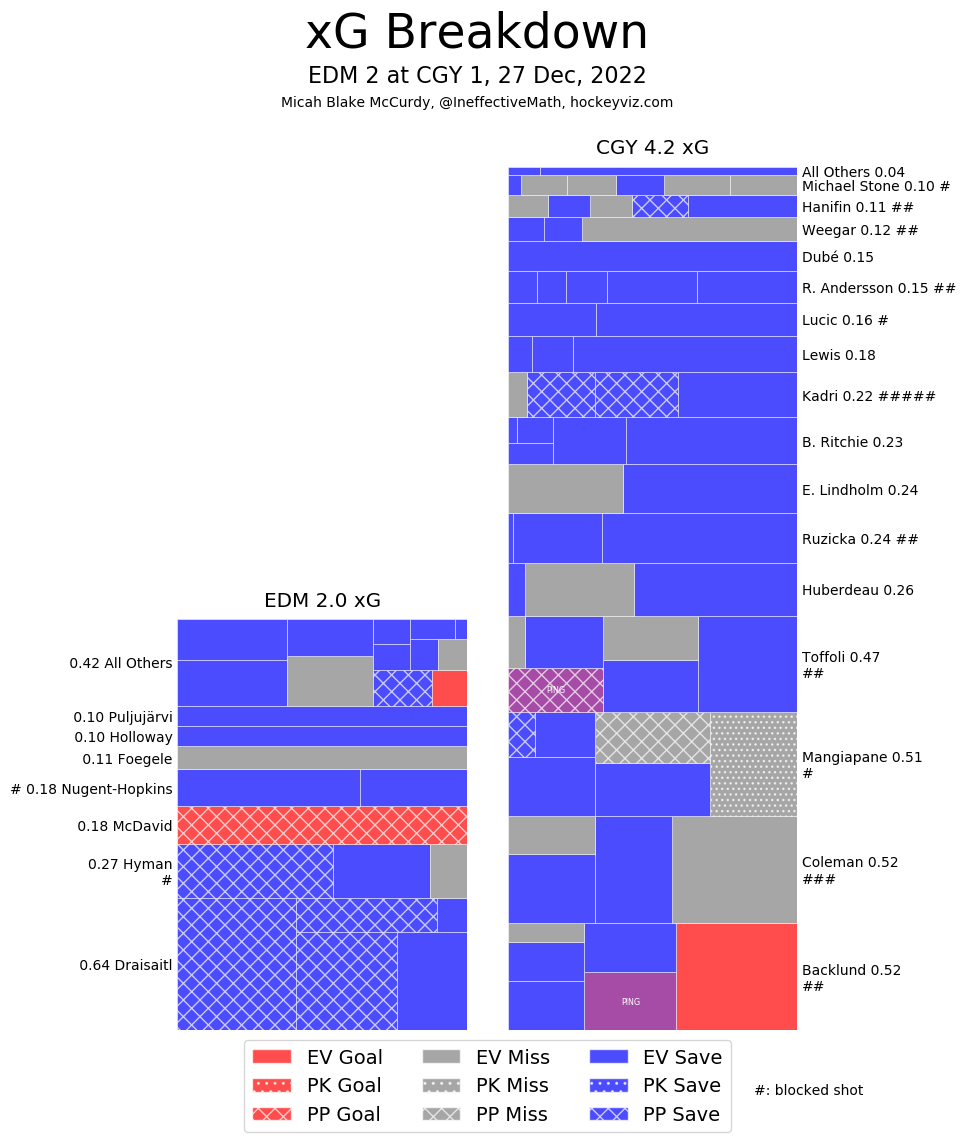 xGF% – He lives at the top of these lists – Ružička (87.46%) is the Flames best offensive chance creator right now and they’ve cast him to the fourth line. It might be the biggest failure to recognize the potential in a player I’ve seen from the Flames organization in a very long time. He turns the puck over occasionally, but he fights like hell to get it back. His positives far outweigh his negatives and him not getting top 9 5v5 offensive minutes is a failure on the team. Tyler Toffoli (86.19%) and Mikael Backlund (84.23%) also finished above 80% while the lowest ratio was Ritchie (66.64%) who is still at a highly successful ratio percentage. Sometime the better team loses – that’s hockey.
Game Flow – 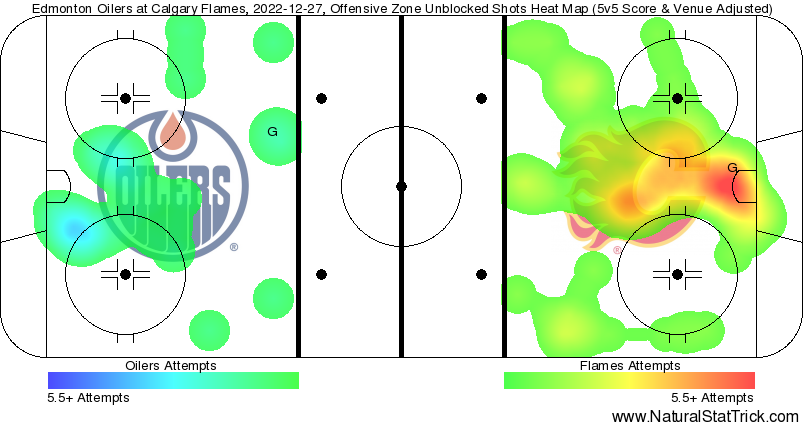 In The Crease – 1.11 expected goals against and a 5v5 Sv% of 0.938% – nothing but top Grades for Markstrom. The McDavid power play goal is going to always happen if you give him that much of a gap, but if you gap up he’ll burn you wide with his speed. It’s lose-lose defending and usually the goaltender ends up with blame, not tonight. The Oilers may have barely had the puck but they still got some decent looks – just less frequently than Skinner needed to. This was a quality start against the team people say have cursed him – would have been nice if the team in front of him could have repaid the favour with some goals.
Today’s Specials – If you give the Oilers power plays they are going to burn you. The rule is that simple. Mangiapane’s holding call was a legitimate call, and very obvious. Without the Tkachuk antics, with Kane currently out of the lineup and with Kassian in Arizona the ability to limit the power plays has increased, but all the Oilers need is 20 seconds for McDavid magic.
Player Spotlight – Mikael Backlund – He’s constantly been the guy this year. Ružička gets a lot of praise from me, but Backlund gets the harder jobs and still puts up top numbers. The line with Mangiapane and Coleman are always tops in the league in what I call the core 4 base metrics and very rarely get out possessed or out chanced. Backlund has that extra drive too – we saw it in the playoffs – they need him to use it for 45 straight games if they want playoff aspirations.
The Goals –
Flashalytic’s 3 Stars –
1) Mikael Backlund
2) Adam Ružička
3) Tyler Toffoli
The Flames play again on Wednesday against Seattle in Seattle.
(Stats compiled from Naturalstattrick.com // Game Score from Hockeystatcards.com // xG and Under Pressure charts from HockeyViz.com // Game Flow and Shot Heatmap from NaturalStatTrick.com)
Editorials
Recent articles from Shane Stevenson