Beyond the Boxscore: Flames find late scoring burst as they throttle the Sharks 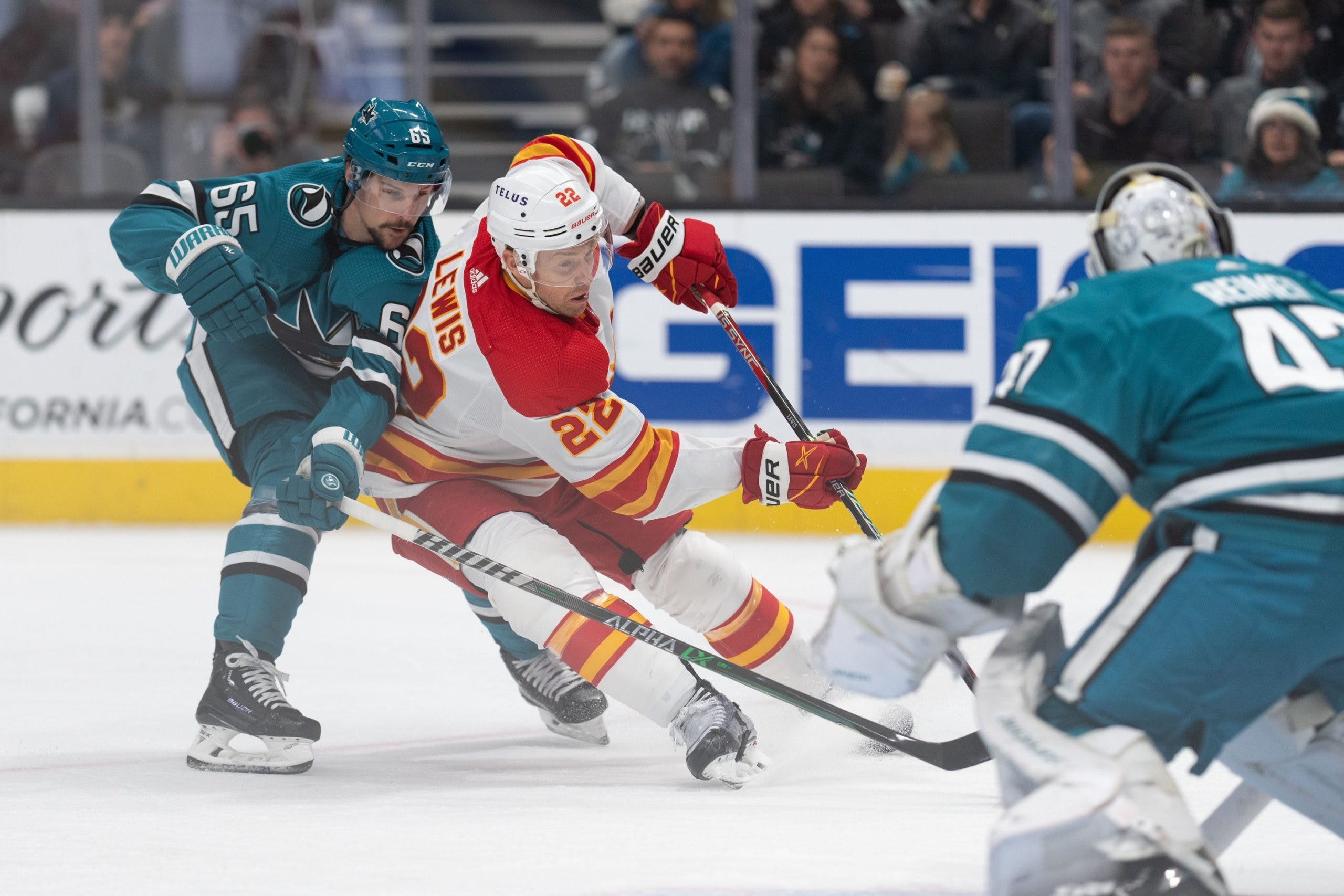 By Shane Stevenson
1 month ago
The floodgates opened up for the Calgary Flames as they throttled the San Jose Sharks to the tune of a 7-3 victory Tuesday night. They just seemed to have the Sharks’ number the last couple of days showing all their fans things could be much worse than they currently are. The new lines looked like they were working, the passes were crisp and creative, and everyone stayed on target all the way through till the game was over.
CF% – 66.85%, SCF% – 64.72%, HDCF% – 64.77%, xGF% – 67.69%
It’s a Team Game – High danger chances were 13-9 in Calgary’s favour making them not completely innocent from criticism. There were still instances where the Sharks were able to get some dangerous looks, but without any real structure to their game as a team they don’t get a lot of second or third opportunities. Calgary had an advantage in HDCF% and xGF% every single period of this game.
Corsi King – Andrew Mangiapane (87.11%) reunited with his old pal Mikael Backlund (84.40%) and Blake Coleman (77.05%) wit immediate dividends being paid. Those three were one of Calgary’s most dangerous line combinations last year and were a huge part in the playoff run Calgary did end up having. Chris Tanev (73.31%) the proper words to describe his resiliency do not exist.
Corsi Clown – Really only Brett Ritchie (39.24%) got stuck on the bad side of chances while linemates Ružička (49.01%) and Lewis (49.11%) were a lot closer to even. Ružička has been a polarizing topic amongst fans this last week. Some feel they see him taking shifts off and needing a message sent – I’m constantly seeing great offensive chances from the high danger area and a creativity to get the puck into loose areas for quick strike chances. If Lucic (69.24%) ever starts to gas out on the second line a swap could occur fairly easily between those two.
Under Pressure – 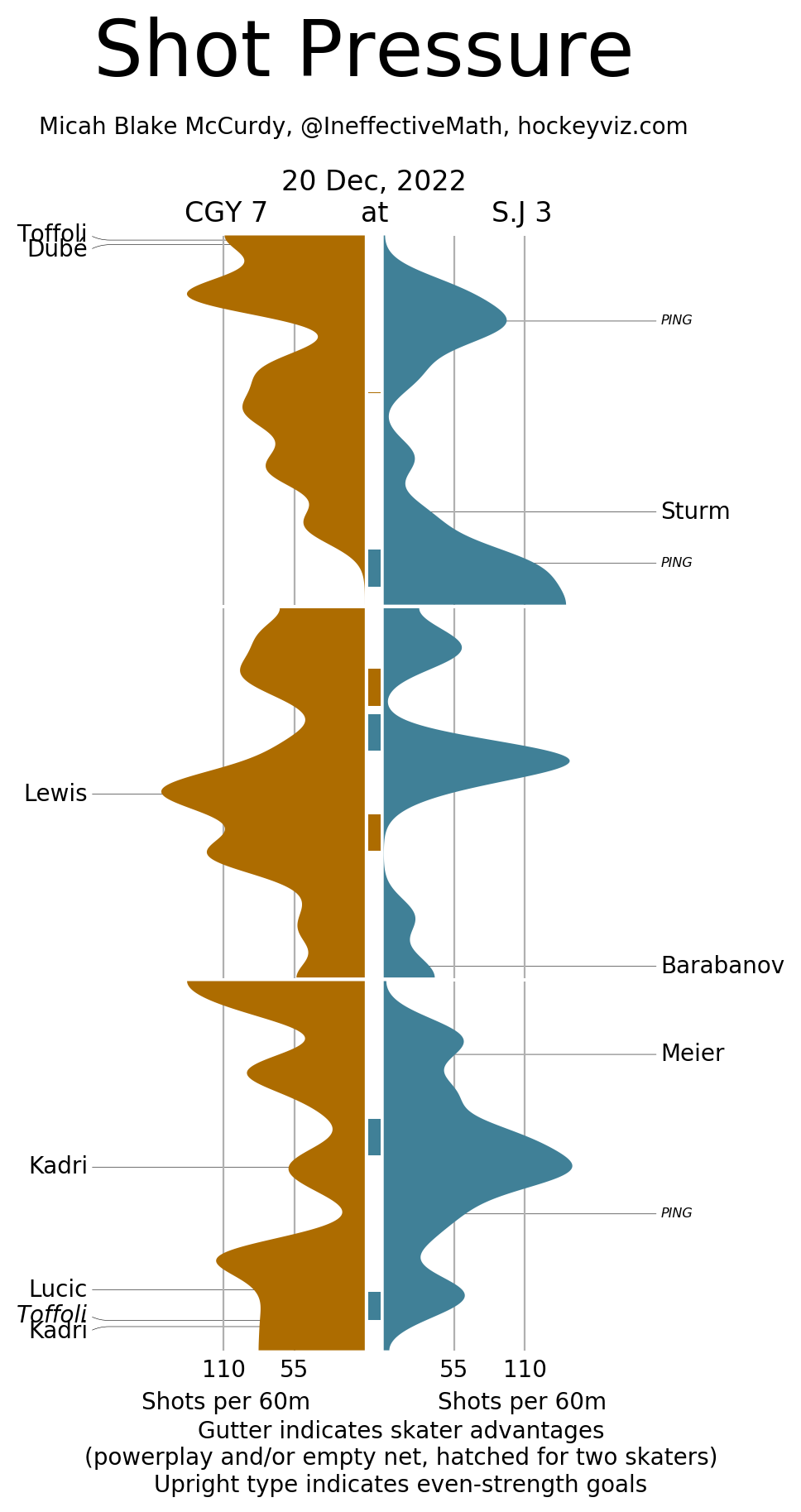 Taken By Chance – Lets just show how ridiculous this line is – No high danger scoring chances against for Coleman (100 SCF% // 100 HDCF%), Mangiapane (11% // 100%), and Backlund (100% // 100%). In fact, the opposition didn’t even register a single scoring chance. That’s pitching a perfect game spending all your time in the attacking zone. Nobody else ended up getting crazy amounts of high danger chances for themselves, they just pounced on the bad goaltending from the Sharks.
xG Breakdown – 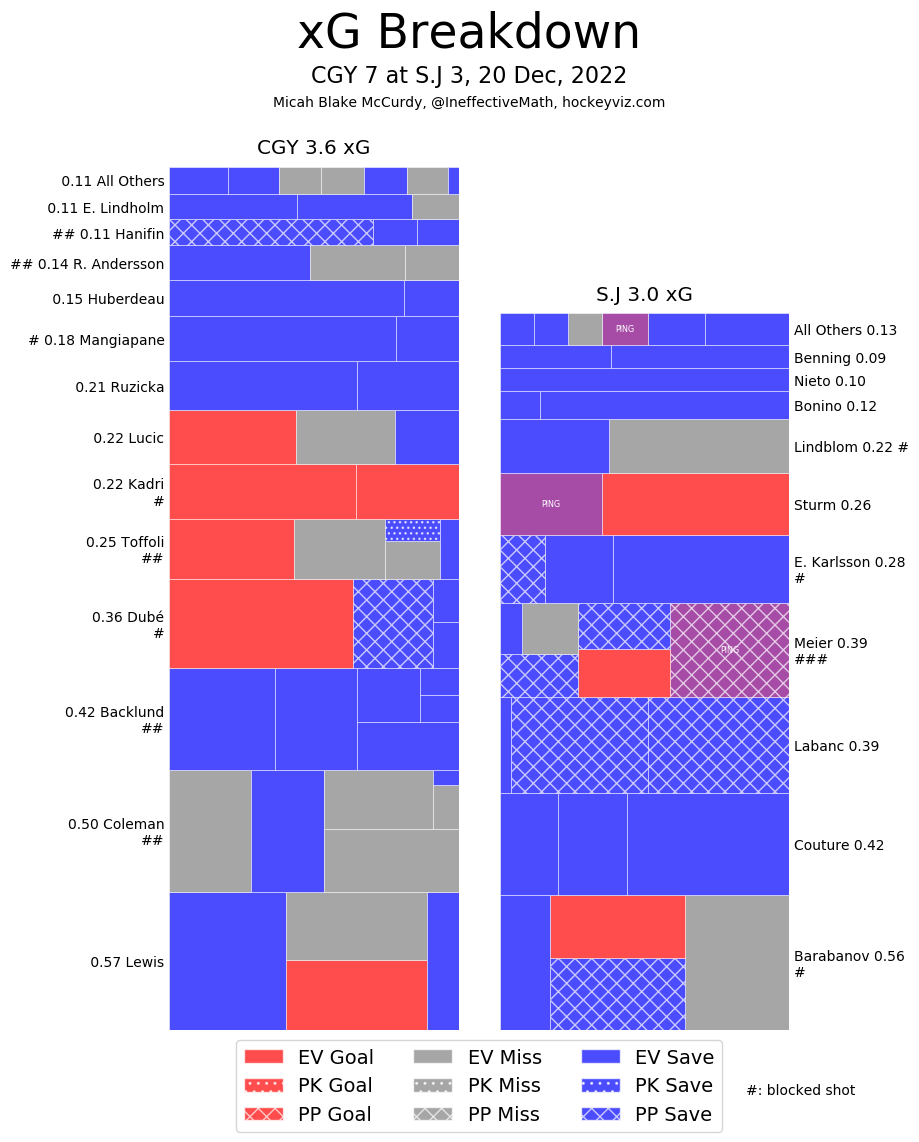 xGF% – Every single player finishing over 50% is not something you see too often. By my recollection – and it very well could be wrong – that happened 6 times last season. This would be the third time this season with them actually losing one of the earlier two this year. Calgary got the result the deserved against a Sharks team that is definitely going to need a few more years to figure themselves out. Whatever Is going on in the Bay area cannot be fixed quickly.
Game Flow – 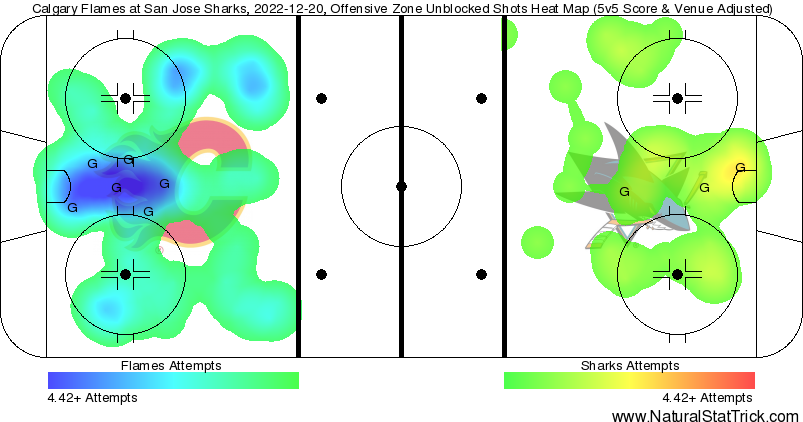 In The Crease – 1.84 expected goals against with two high danger and one medium danger chance getting behind him – Jacob Markstrom had a pretty easy night to coast to victory. He was crucial early at keeping the Flames lead at 2-1 with the Sharks getting power plays, but he was always up to the challenge. His team left him out to dry on the Barabanov goal late in the period as well. It wasn’t the prettiest looking win, but it counts the same no matter what.
Player Spotlight – Chris Tanev – Just weeks after taking a puck to the back of the head Tanev was out there controlling play in his own zone as if he never missed a second. Partner MacKenzie Weegar and him tend to play well enough as is every night but in this one they were noticeably more dominant in controlling the puck and transitioning it up to their forwards. The Flames look like they could be a playoff team when he is in the lineup and they struggle when he is missing – glad to see you back and healthy Tanev.
The Goals –
Flashalytic’s 3 Stars –
1) Toffoli
2) Kadri
3) Huberdeau/Lindholm
The Flames are back in action on Thursday when they visit the Los Angeles Kings.
(Stats compiled from Naturalstattrick.com // Game Score from Hockeystatcards.com // xG and Under Pressure charts from HockeyViz.com // Game Flow and Shot Heatmap from NaturalStatTrick.com)
Editorials
Recent articles from Shane Stevenson