Beyond the Boxscore: Flames score some pretty goals, escape collapse against Ducks 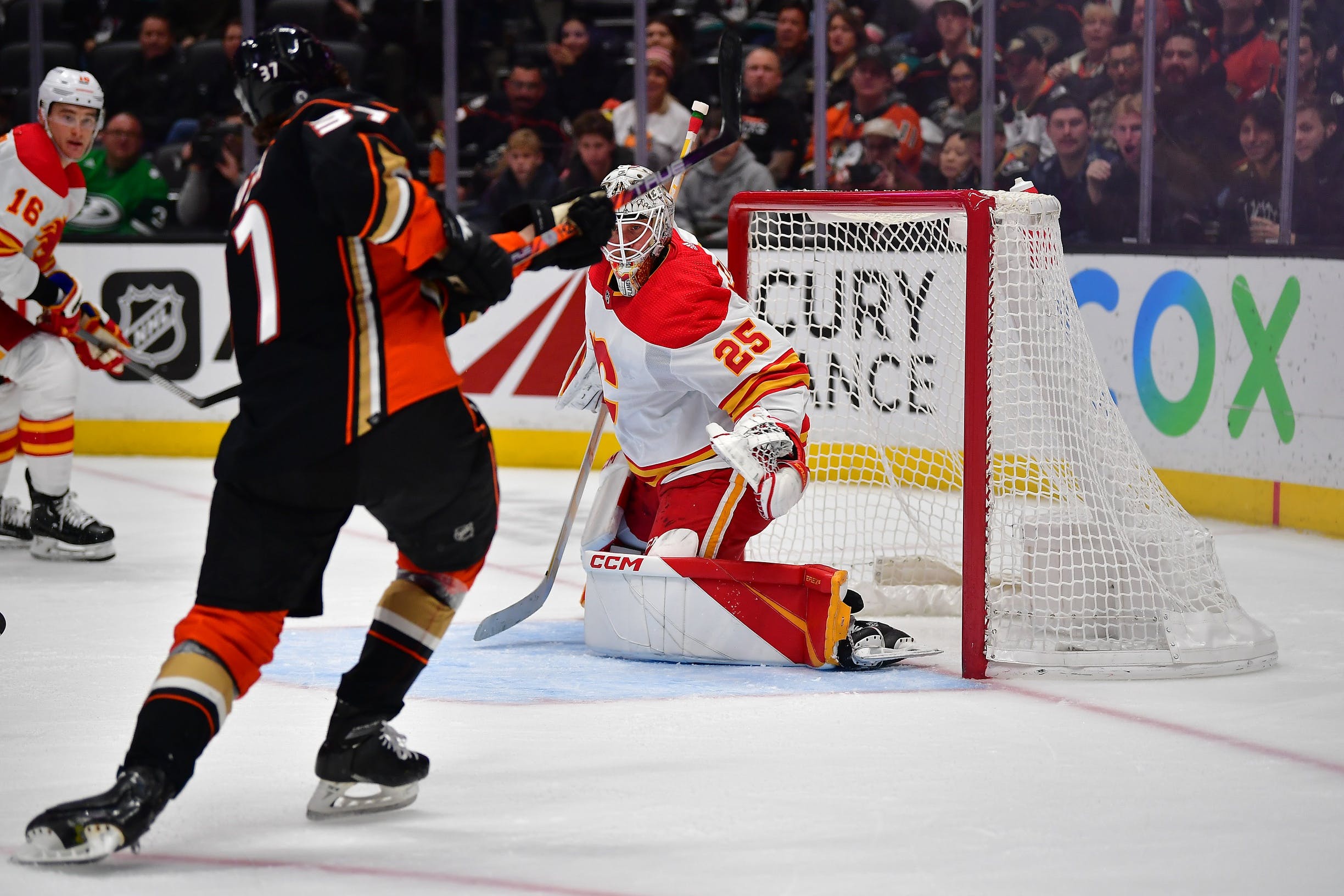 By Shane Stevenson
1 month ago
Rasmus Andersson goes bar down in overtime to propel the Calgary Flames to an overtime victory against Anaheim. Calgary controlled most of the play the whole game except for when they were in the penalty box. The problem was the parade to the penalty box was a long one. Through all the self-inflicted wounds the Flames found a way and ended their California road trip on a high and, more importantly, in a playoff spot.
CF% – 63.06%, SCF% – 60.74%, HDCF% – 68.09%, xGF% – 63.69%
It’s a Team Game – 5v5 this game was no question just Calgary’s to dictate. That Ducks team may be fast and have some young skilled players but there is not an ounce of a structure in their game. No proper breakout, checking system, effort to battle on the boards… nothing. Yet, with the help of FOUR posts, the young Ducks goaltender was able to largely stop the Flames. Calgary was struck with their fair share of bad luck which – at times – felt impossible.
Corsi King – Brett Ritchie (82.30%) with a very beautiful goal. There were some nice goals in this one instead of the usual second chance goals the Flames scrape together. I take ‘em any way I can get ‘em but it is nice to see those kinds of goals once in a while. Nikita Zadorov (78.10%) led on the back end. It wasn’t a clean sweep for the team here, some players did have to play a decent amount of defence.
Corsi Clown – Nazem Kadri and his line got stuck in their own end more than any of the others. That includes Milan Lucic (47.25%) and Jonathan Huberdeau (41.42%). That line just struggled against the Ducks who are one of the few teams you can definitively say are bad this early in the season. You would expect the line with two of your top paid players to at least push play against a team like this. Everyone can have one random off-game and this line is too new to say if it’s the norm or the exception, because of that we won’t go too harsh into a critique.
Under Pressure – 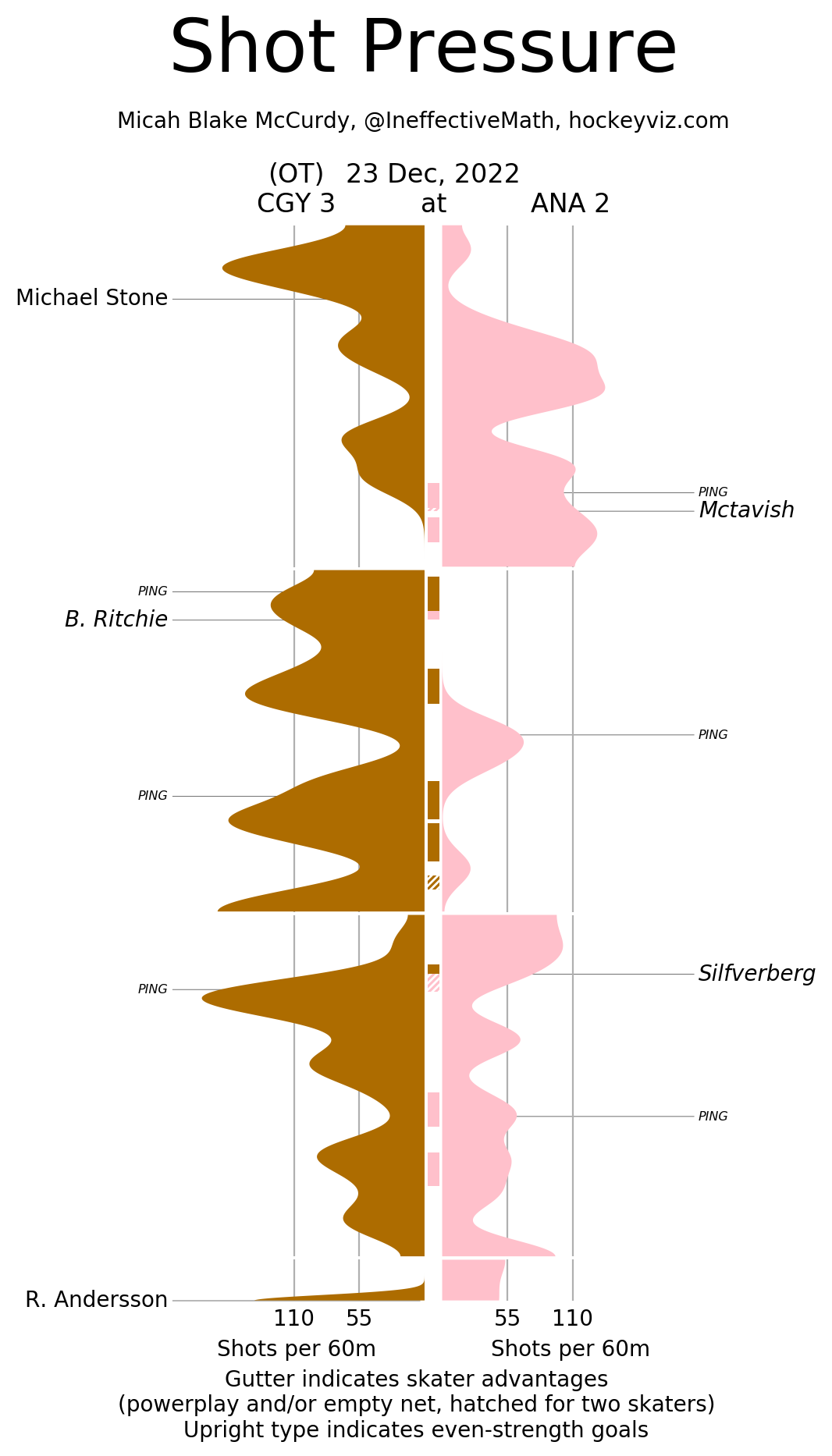 Taken By Chance – How did Noah Hanifin (33.23 SCF% // 0 HDCF%) not get a single high danger chance in this game after being lights out the best skater on the ice the night before. That’s too much polarization in the game. Calgary still suffers from making the big mistake a few times every game – their defensive coverage is very strong but occasionally cracks and usually in an extremely dangerous way. If they let the other team walk in with possession the defence tends to get turned around if the other team has speed. Its one area of their game that leaks a high number of high danger chances – that and taking 6 penalties a game.
xG Breakdown – 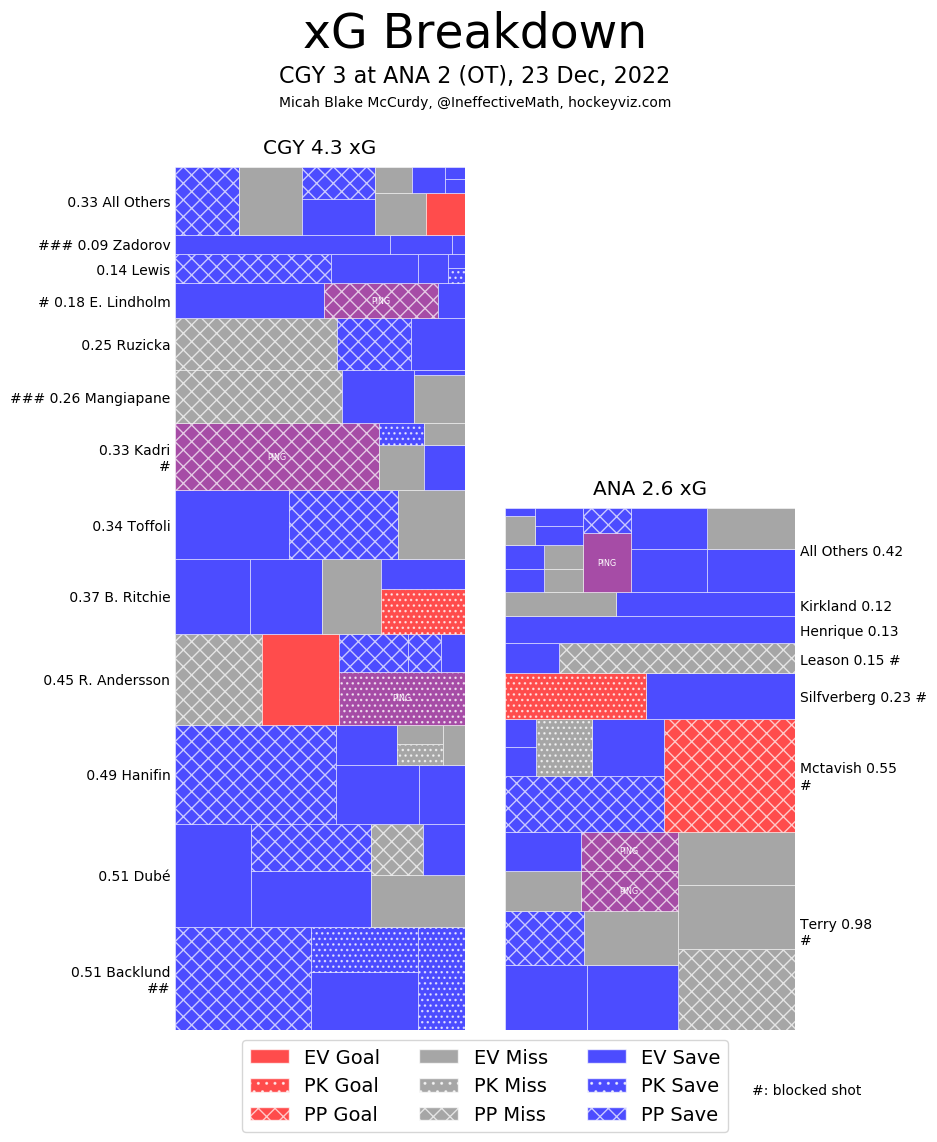 xGF% – Dillon Dubé (86.25%) bounces back from being on the flip side of this ratio the night before. He hasn’t looked too out of place with Lindholm (78.08%) and Toffoli (80.00%) at all. His speed forcing pucks up the wall quickly is going to create turnovers with those two in the secondary coverage. Dubé can be like the edge rusher and those two can act like DB’s getting ready to pick the puck off through the neutral zone. If they attack and forecheck like that they’ll find plenty of success.
Game Flow – 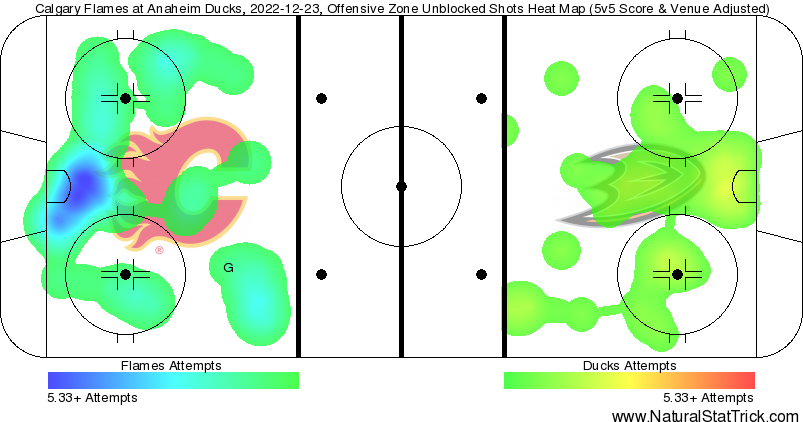 In The Crease – For the limited amount of work he saw it took two power plays – one of which was a 5-on-3 – to get any goals behind him. Tomorrow is always a new day where anything can happen, but as of right now based on his play the last two weeks Markstrom is back in prime form. He’s not turning pucks over trying to play it, he’s not letting squeakers in from mid-range, and he’s always on his toes ready to play. Here’s hoping he stays like this and Calgary can keep finding ways to collect points.
Today’s Specials – The power play for Calgary clicks just once and this game is over in regulation. They hardly could generate much on most of their opportunities. PP2 constantly finds more extended possession and makes more successful passes than PP1, yet nobody will shoot the puck. The Flames have a real problem on the power play because nobody steps up and decides they are going to be the one to shoot. It’s too obvious when its Stone and becomes easy to defend, but the players need to communicate and at least pick someone every single night to be the triggerman.
Player Spotlight – Blake Coleman – Year two in Calgary with great defensive numbers and a struggle to get goals consistently. This man carries a paycheque that comes with the expectation of being able to get some goals too. He’s got just 5 in 35 games which is not what he was putting up in previous stops. His impacts are above fine – he’s driving play and always has positive metrics in both offensive and defensive categories – I’m just greedy and want some depth guys to be able to get that one extra goal Calgary has needed a few times this year.
The Goals –
Flashalytic’s 3 Stars –
1) Brett Ritchie
2) Michael Stone
3) Dillon Dubé
The Flames return to game action on Dec. 27 when they host the Edmonton Oilers.
(Stats compiled from Naturalstattrick.com // Game Score from Hockeystatcards.com // xG and Under Pressure charts from HockeyViz.com // Game Flow and Shot Heatmap from NaturalStatTrick.com)
Editorials
Recent articles from Shane Stevenson