Beyond the Boxscore: Flames fall asleep at the wheel, lose despite leading after two periods By Shane Stevenson
10 months ago
The Calgary Flames blew a 3-1 lead in the second period to lose their third game against the Sharks this season. It’s the third multi-goal lead they’ve blown this month but this one wasn’t built the same as the the others. There were two goals that the Flames Vezina candidate goaltender would want back, and then the team completely gave up on the game plan in the third period to try and get goals. It’s a nice wake-up call for a team that has now got some lofty expectations behind them.
CF% – 56.04%, SCF% – 51.99%, HDCF% – 36.35%, xGF% – 41.77%,
It’s a Team Game – Calgary did not do what they normally do and prioritize attacking the crease. Too many times the simply settled for shots from the point to go for the deflection, which can work occasionally but should never be the default setting. The Sharks did prioritize crease crashing and they did it on a good night – Markstrom was not himself. As such it resulted in two goals from the high-danger area 28 seconds apart in the third period. Calgary did have quite the push the last 2 minutes with the goaltender pulled but did not succeed.
Corsi King – Andrew Mangiapane (79.41 CF%) was not one that saw many chances go back towards the Flames end. The 5 Corsi events against was lowest amongst the entire team. His line with Jarnkrok (65.69%) and Coleman (65.69%) was good in overall possession – but ended up surrendering too many high danger looks in their own end. The Flames want their players to create good opportunities – which team doesn’t – but they want it to not come at the cost of turnovers which were abundant in the Flames lineup Tuesday night.
Corsi Clown – They came out flying but ended up being on the wrong side of the Sharks tonight – Elias Lindholm (39.46%) and Johnny Gaudreau (40.75%) weren’t able to generate like they usually do. Which is saying something because I personally noticed Johnny playing extremely well. Many of his nice plays came on the PP, 4-on-4, or 6-on-5 tonight which would not be captured in these ratios. Wasn’t good enough though as they got outscored 1-0 at 5v5.
Taken By Chance – Andrew Mangiapane (64.44 SCF% // 75.07 HDCF%) wasn’t out for the extra 3 high danger chances Jarnkrok (50.14% // 41.84%) and Coleman (50.14% // 41.84%) were out there for and as such grades out well in the statistical chance and possession departments. I’m not really inclined to give too many players great grades because everyone kind of took a nap in the third period. Nikita Zadorov (59.14% // 45.59%) was a complete trial by fire participating in 6 high danger chances for but giving up 7.
xGF% – The Flames got buried In terms of quality of chances – and that’ll happen when you fire as many shots from the blueline as Calgary did. Mark Giordano used to shoot the puck through traffic rather than keep the cycle alive low in the zone – it creates more odd-man rushes and less goals than it’s alternative. Now I’m not going to bash Gio – he was a fantastic defensive defenceman that was great in transition and could really pass the puck – I just don’t like that one aspect of his game. The Flames defenceman shot from the point way more than they had in any other game this year – next game they need to return to the aggressive approach of getting near the slot. Mangiapane (81.29%), Coleman (53.20%) and Jarnkrok (53.20%) were the only Flames above 50%.
Game Flow –

It hasn’t happened very often where the game ends and the bar isn’t on Calgary’s side of these charts. I could post the Moneypuck.com deserve-to-win o’meter on here and it would say the same thing – the Sharks outworked the Flames. Calgary just did not bring the effort they usually do and it cost them 2 points against a team they should have been able to beat.
Game Score – Only six Flames players had positive game scores: Markstrom and five skaters, led by Mikael Backlund (1.44). Erik Gudbranson was the game score caboose at -1.92.
Shot Heatmap – 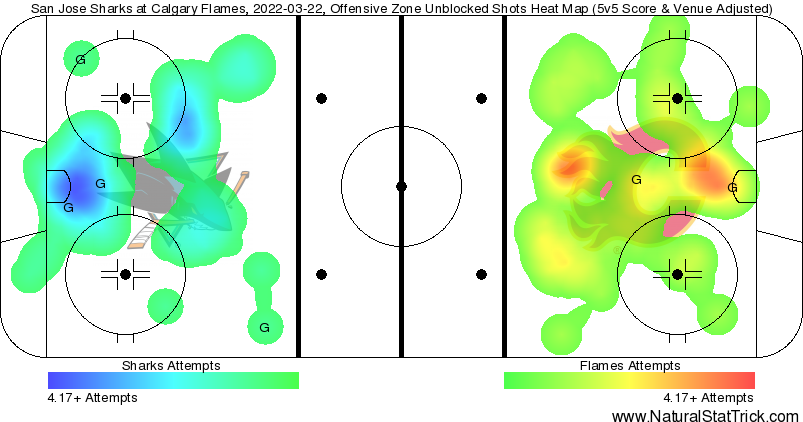 Just nowhere near the volume of shots in the crease like we have seen from the Flames for the majority of the year. The heavy red well above the circles is one of the primary reason the Flames couldn’t score even more goals. They settled for way too many low percentage scoring opportunities – kind of like the Sharks were doing. It worked for the Sharks and not for Calgary because that’s the Sharks game – definition of playing to your opponents level. Lots of losses this season come with the disclaimer “lost but played well” – not in this effort, not in this game.
In The Crease – It was not a good night in net for Markstrom – he even said so himself post-game. He’s also one away from tying a franchise record in shutouts so that’s a major part in why we aren’t too aggressively critical. The third goal saw Kylington completely left his man alone in front – he also visibly showed that he knew he blew his coverage. The fourth goal the winger throws a bad pass across the ice – it goes off a skate and right to the Sharks for a 2-on-0. Simple, avoidable mistakes on those two, but Markstrom knows the first two are ones you got to have. 2.72 expected goals against (it’s not usually above 2) with 2 high danger goals, one medium danger, and one low danger goal getting by the goaler.
Today’s Specials – Now they were constantly buried at 5v5 but on the power play Johnny Gaudreau was a magician. He had the hands in full stickhandle mode as he danced around defenders to try and create space for himself. His power play goal came off a great entry read and dump pass by himself – Toffoli shot it, Lindy and Tkachuk had some quick passes and got it back to Johnny who let it rip. Just a shame his 30th of the year and 200th of his career couldn’t have come on the penalty shot – James Reimer harshing the vibe with his glove.
Player Spotlight – Dillon Dubé – The one main criticism I have of Dubé is that he disappeared as this game went on. He came out and looked like a dangerous threat every shift in the first period but was a non-factor in the third period. I’m going to place a little bit of it on the line shuffling, but you’ve got to be able and ready to play with anyone on the roster. He sure has played lately like a guy who knows the opportunity he’s getting (when iced with Backlund and Tkachuk) and it’s up to him to be consistent enough to keep that spot.
Flashalytic’s 3 Stars –
1) Andrew Mangiapane
2) Matthew Tkachuk
3) Mikael Backlund
The Flames season continues Friday against the Arizona Coyotes at 7 p.m. MT. They’re going to have two full days to think about this loss.
(Stats compiled from Naturalstattrick.com // Game Score from Hockeystatcards.com)