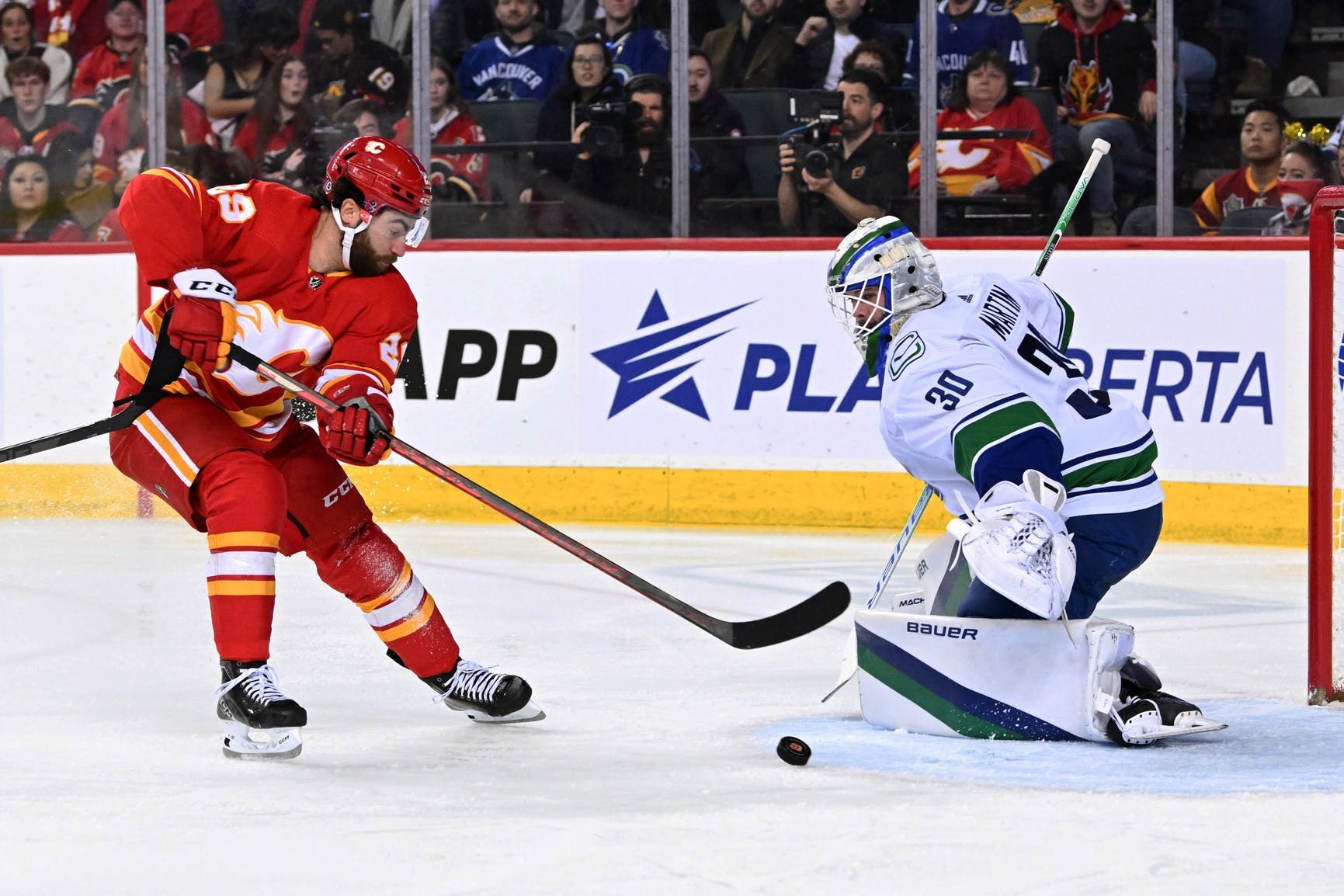 By Shane Stevenson
25 days ago
First off – happy new year to everybody reading this. For you to take the time out of your days to catch up with the numbers and my thoughts on how the Flames are doing – massively appreciative. I read all the comments on Facebook, Twitter, and right on the articles themselves. Thank you so much for making all these late-night summarizations worth the time.
Okay, now the game – which was pretty evenly played for most of it. Calgary had a lot of shots early but outside the power play hardly anything was dangerous mixed with Spencer Martin being on the ball. Cue the guy who threw a tantrum at his goalie in his last game – J.T. Miller – who proceeded to completely bail on his teammates this game, twice. He cares just a little bit and the Canucks may actually win this game. Alas, instead he went for a skate which allowed Lindholm to score on a 2-on-1 and Coleman to get one shorthanded. Keep whacking those crossbars Miller, I’m sure it’ll help you remember how to care. 2 points, Calgary.
CF% – 54.12%, SCF% – 53.98%, HDCF% – 54.62%, xGF% – 57.4%
It’s a Team Game – I was a little harsh on Miller there – Calgary did have an advantage in all the metrics – but a performance that clearly lazy needs called out at the professional level. People pay hard earned money to watch you, show some damn work ethic. Calgary went into a kind of protect the lead mode at the end which resulted in a bunch of icings. They also hit another 2+ posts which is the most annoying thing. Regardless Flames played (mostly) hard and the country roads took them home.
Corsi King – Ružička (68.23 CF%) is an everyday NHL player that needs more than 7 minutes 5v5 a night. What good is controlling play if it just dies on Lucic (41.95%) stick more than he creates anything. He gets 14 minutes 5v5 too? No way I agree with that, but the coach is going to keep doing what he’s doing. Who am I to argue with a lineup that has more wins than losses anyways. If the Flames had and/or listened to any form of analytics department, they would see the depreciating value of this lines impact the last few games. It’s almost 2023 though – why use modern technology and data strategies right?
I’m treating New Year’s Eve like Festivus I guess – just airing grievances.
Corsi Clown – Brett Ritchie (39.16%) is very clearly hurt, and I wish him a speedy recovery. Nazem Kadri (40.40%) with linemates Lucic and Huberdeau (41.89%) were the only one that lost the overall attempt match-up. Also the only line to lose the quality of attempts and high danger chance battle as well. Hanifin (44.23%) and Andersson (45.86%) also were on the slightly lower end here. It would help if Hanifin didn’t make soft plays in the corner like this one. You owe your goalie dinner buddy, thems the rules.
Under Pressure – 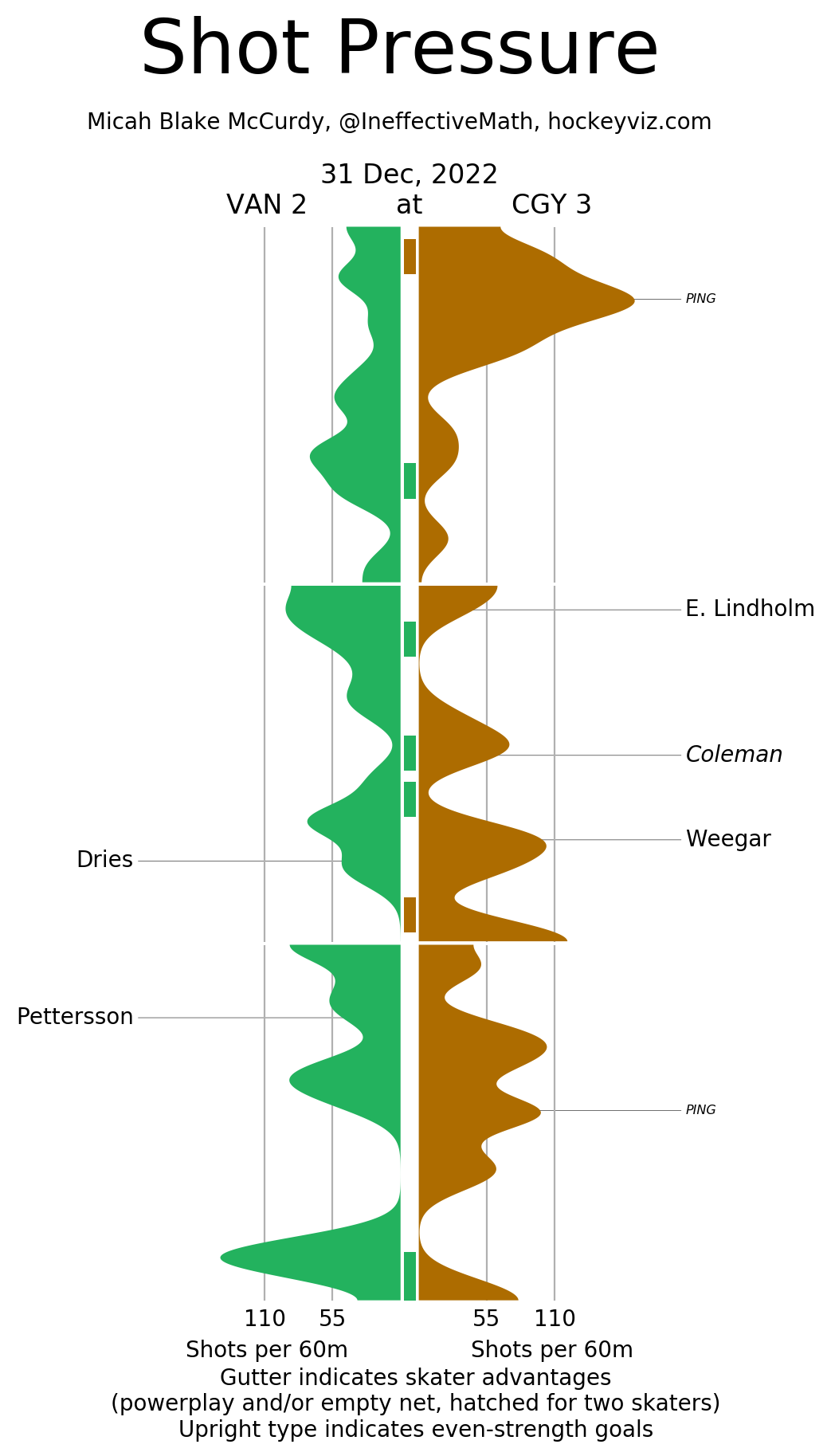 Taken By Chance – Mikael Backlund (59.75 SCF% // 79.71%) with over 8 high danger chances and Blake Coleman (53.64% // 85.62%) with two clear cut breakaways. It’s the referee’s turn to get some – why do none of them ever call penalty shots. By the rulebook there should be one to two of these a week and yet we may get 10-15 all year (if that). They are exciting and add to the entertainment value of the game. All this is under the assumption the refs actually call what they see and don’t let anything go. This is just an observing complaint because Calgary won – but still get your stuff together NHL it’s so obvious how bad this is nightly with the video review that exists on social media.
xG Breakdown – 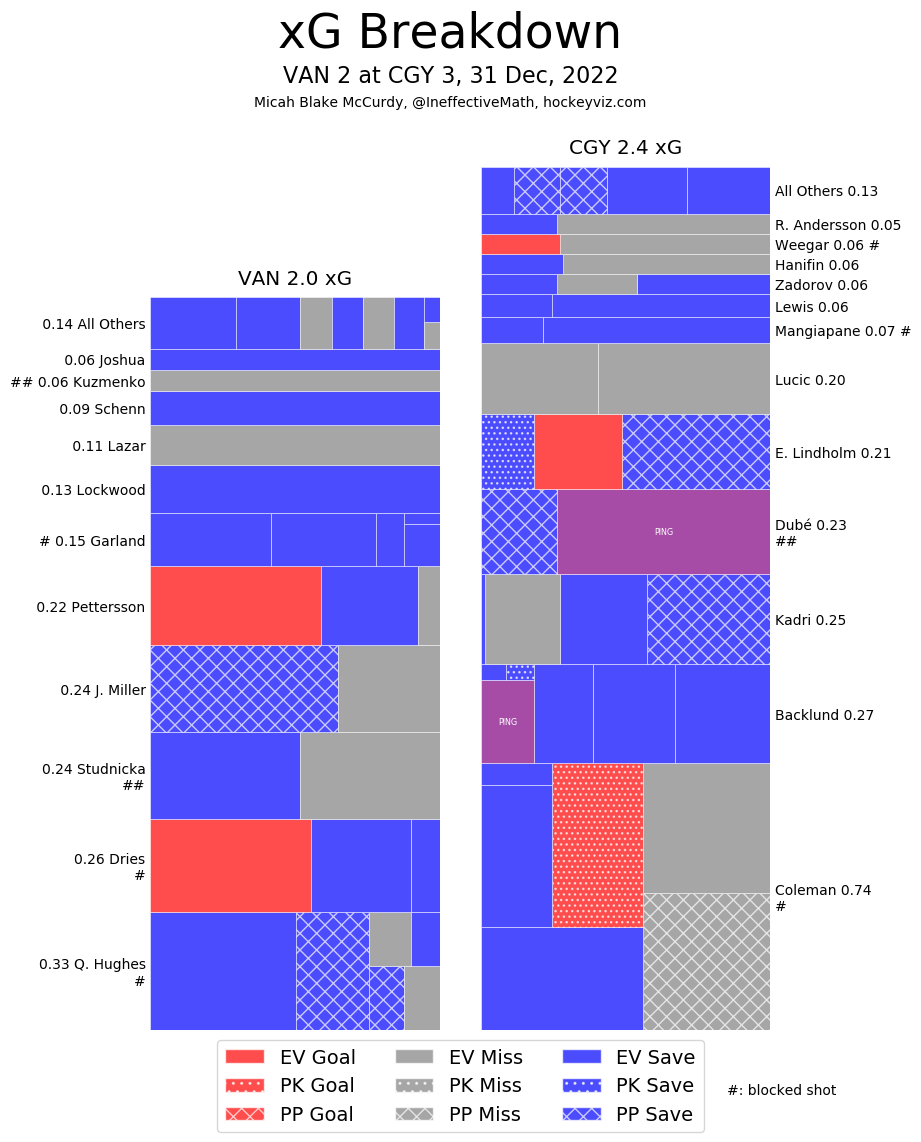 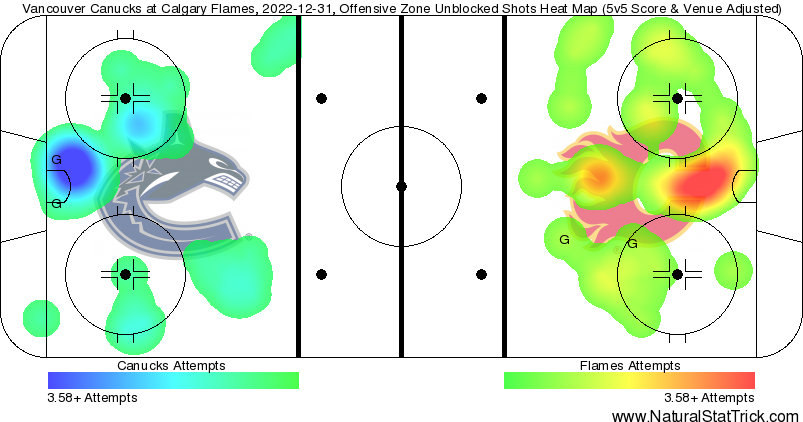 In The Crease – Markstrom’s athleticism was on full display as the Canucks tried to press for a tie. 1.43 expected goals against at 5v5 with both goals being high danger chances. The Dries goal was a bit unlucky for him with all those bounces. A solid performance from 25 giving everybody in the building a memory that will last forever.
Player Spotlight – MacKenzie Weegar – The production has not been there but the solid play has. Not every night is going to finish all coming up roses but that’s life against the NHL’s best. I’ve said it in here before as long as one pairing of Hanifin/Andersson or Weegar/Tanev are going the Flames stand a chance to keep it close. If they’re both getting stranded in their own zone or failing at breakout passes the Flames are hooped. Weegar is typically in the green on these areas and Is noticeably getting better as the games go by.
The Goals –
PS: Shoutout to Robert and Taranjot for all the clips, they even give me special requests sometimes. (You too Zach!). Follow those guys for instant video replay that’s 112% Flames centric.
Flashalytic’s 3 Stars –
1) Blake Coleman
2) Mikael Backlund
3) MacKenzie Weegar
The Flames are back in action on Tuesday when they face the Winnipeg Jets.
(Stats compiled from Naturalstattrick.com // Game Score from Hockeystatcards.com // xG and Under Pressure charts from HockeyViz.com // Game Flow and Shot Heatmap from NaturalStatTrick.com)
Editorials
Recent articles from Shane Stevenson