Beyond the Boxscore: Calgary Flames suffer largest loss of season at hands of the Florida Panthers By Shane Stevenson
1 year ago
The score will tell you this was all Florida, but that wasn’t the case for the start of the contest. The Flames pushed hard out of the gate, while the Panthers gave them the same effort back. At times it looked like Calgary was taking control only for the Panthers to swing momentum back in their favour. It wasn’t until the latter half of the second period – and then following in through the third – that the Panthers really took control. They have a relentless loose puck pursuit and take as many chances as they can, even if on the outside. The Panthers are a top team – and Calgary hung with them better than the score dictated.
CF% – 48.1%, SCF% – 54.37%, HDCF% – 54.69%, xG% – 56.79%
It’s a Team Game – I’ll stress this one more time – there were times Calgary was in complete control of this match. The first period was largely dictated by the Flames, but they gave the Panthers 2 power play goals. Then they fended them off for the most of the second, but the Lomberg goal (on some terrible defensive decisions from the defenceman) really put a sword in Calgary’s back before the third. The Flames never did quit, instead the Panthers started getting some weaker goals on maybe Markström’s worst performance of the season to date.
Corsi King – Nikita Zadorov (61.18 CF%) leads the team with partner Erik Gudbranson (59.23%) as the only D pair in the positive for all-situation all-type attempts. Both the two top lines finished at/or above 50% led by Matthew Tkachuk (54.05%) and Blake Coleman (52.47%). Someone did something to Coleman’s corn flakes this morning because he was a puck shooting machine and played with a nasty edge all night.
Corsi Clown – Womp womp, Sean Monahan (34.85%) continues his struggles. Rasmus Andersson (35.54%) is struggling to find his way out of the covid shutdown as well – Noah Hanifin (36.97%) struggled in this one as well. The Blasty Bros. Milan Lucic (42.13%) and Dillon Dubé (42.95%) also were in the “not good but not terrible” range.
Taken By Chance – Noah Hanifin (38.37 SCF% // 14.73 HDCF%) and Rasmus Andersson (38.37% // 14.73%) were on the ice for 6 high danger chances against, but only 1 for. When one of the top 2 d-pairs doesn’t show up to play a top 5 team in the league the goals against will happen. The problems are masked even further in Erik Gudbranson (68.57% // 68.21%) and Nikita Zadorov’s (71% // 72.25%) numbers. Those are high ratios for players who allowed 7 and 5 high danger chances against respectively. Gudbranson being classified as on the ice for 15 high danger chances… in one game? Truly insane – when someone tells you this game was completely back and forth, chance for chance, this is the evidence of that.
xGF% – Trevor Lewis (76.26 xG%) got placed in Pitlick’s (67.34%) spot with Backlund 63.33%) and Coleman (73.58%) a few times later in the game, and he played well there. The Flames really need to get a more consistent option than plugging one of their fourth liners in there. The Flames top line weren’t defensive angels in this either, all of them finishing below 50% – but Johnny did remain hot with his seventh point in his last 3 games.
Game Flow –

A game of ebbs and flows – it was thoroughly entertaining to watch. Even when down by 4 the Flames and the players were still noticeably giving it everything they had – which could speak to a possible mentality they have of always believing they can win the game – no matter the score.
Game Score – Nikita Zadorov has an unbelievable score of 4.74, Gudbranson with 3.20. In a 6-2 loss that seems almost impossible. I’m still trying to process all those chances, but Calgary did have tons in the first with none of them going in. Blake Coleman (2.37 game // 0.51 average) was the only other player above 2 for Calgary. Noah Hanifin (-2.47 // 0.90) really had a rough night in Florida.
Shot Heatmap – 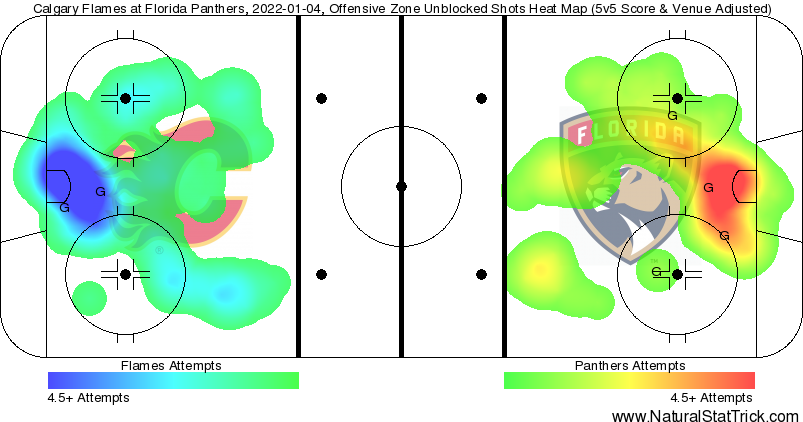 It was a free-for-all and both goaltenders should be mad at their teams for the defensive coverage shown. The main difference at 5v5 is Florida got two goals from distance, Calgary couldn’t beat Bobrovsky from out there.
In The Crease – I was debating on skipping this section because I didn’t want to criticize Markström… but he wasn’t that sharp in this one. Now he never let a low-danger chance by him at 5v5 – so no truly weak goals, he did have 3 medium danger and one high danger chance beat him. Most nights having one medium danger goal beating you is alright, 3 means you were struggling. We mentioned in the last BTB that goalies across the league are struggling out of the re-start – Markström was no exception to that against the Panthers. (His defence wasn’t the best in front of him tonight though either).
Today’s Specials – Don’t take penalties against good teams seems like the easy thing to say, but lets be honest the players already know that. Sometimes they happen in a hockey game – it’s just the nature of things. One of the best cohesive units in the league scored two power play goals on Calgary in the first period. It took the wind out of their sails a bit, and just when they were about to get it back the dagger came off former Flame Ryan Lomberg’s stick.
Quick note before we move on – Florida has turned Mason Marchment and Ryan Lomberg into effective everyday NHL contributors in their lineup. Impressive stuff they have going on behind the scenes in Florida these days.
Player Spotlight – Andrew Mangiapane – I’m just wondering how many chances he’s going to tease us with on the new Blasty Bros line before they start going in again. His game is the type that naturally comes with higher-than-average shooting percentages, so while his number will start to come down from where it is currently Mange can still maintain a 12%+ average. Right now, with Dubé and Looch the line is getting consistent and dangerous chances, but nobody has been able to finish. I’m a believer this line is a goal away from bursting and regularly contributing for a short to moderate stretch of games.
Flashalytic’s 3 Stars –
1) Nikita Zadorov
2) Blake Coleman
3) Erik Gudbranson
The Flames next game is against Tampa Bay on Thu., Jan. 6 at 5 p.m. MT. All covered here at FlamesNation.
(Stats compiled from Naturalstattrick.com // Game Score from Hockeystatcards.com)