Beyond the boxscore – G13: Vanishing act 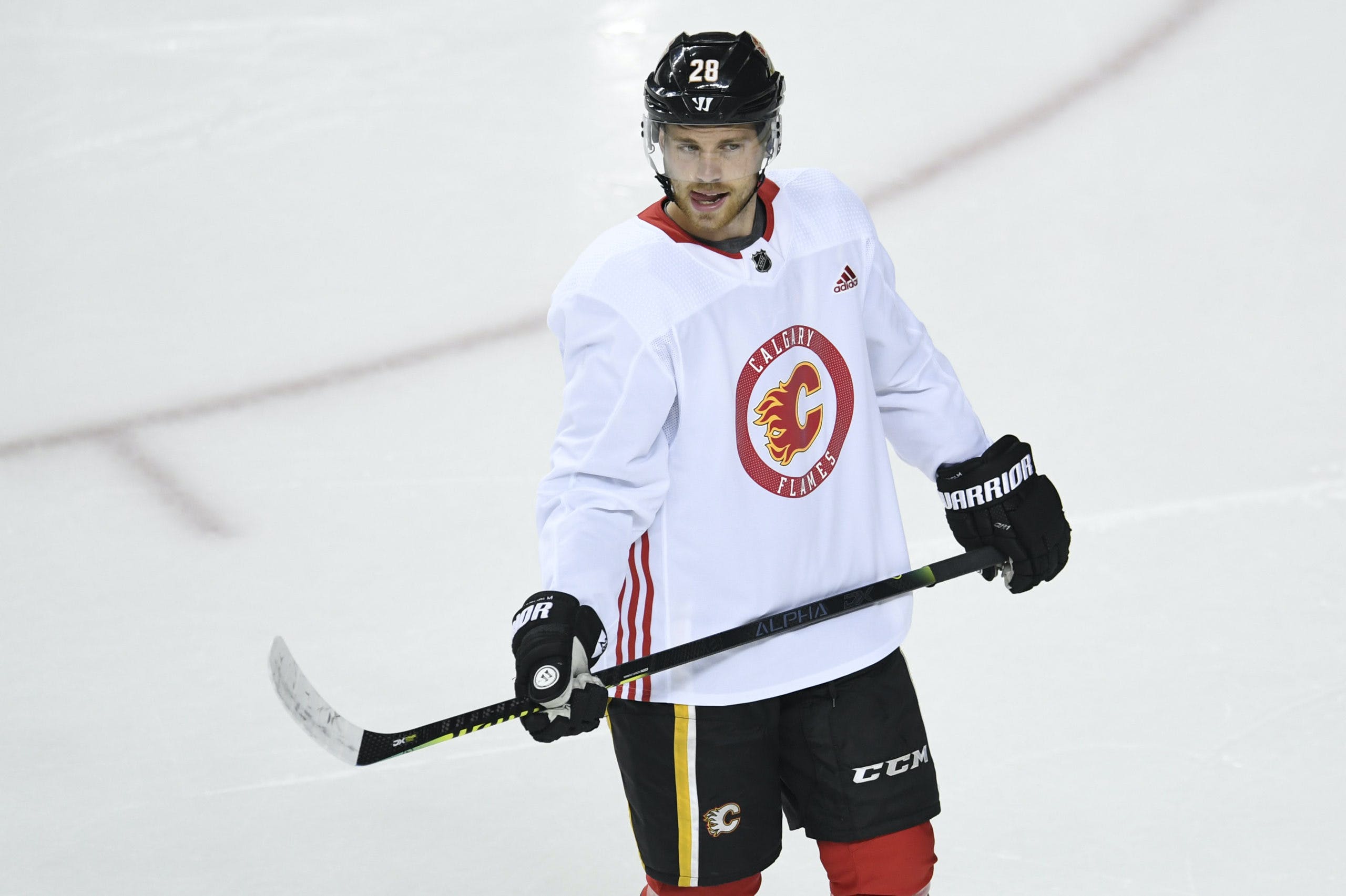 By Shane Stevenson
1 year ago
I’m not going to classify that as “Geoff Ward” era Flames play because it wasn’t. The Habs defended the Flames transition game very similar to how the Devils/Penguins did earlier in the season and it stifled Calgary’s ability to create a sustained attack. The breakout of the defensive zone specifically was abhorrent with the Cs being nowhere near the wingers’ passes causing NZ turnovers that never should occur. The result? A quick attack the other way from the Habs who fed on the slower defenders like they were a delicious snack. The worst line in this one isn’t who would expect however, more on that as we dive in.
CF% – 58.06%, SCF% – 54.68%, HDCF% – 45.91%, xGF% – 46.78%
It’s a Team Game – The numbers paint the clear picture of a common illusion. Flames had the most chances and directed the most puck towards the Montreal net – however very little were of significant value. Montreal didn’t make the Stanley Cup final last year being soft to play against. They employ big physical defenceman that make it hard to attack the slot. Their big physical defenceman are a lot more mobile than the guys the Flames have and tonight it showed up in the numbers.
Corsi King – Mikael Backlund (85.32 CF%) led the way easily winning his matchup tonight. Flames had two lines going at 5v5 and his was one of them. Andrew Mangiapane (75.51%) continued to do Mangiapane things. The guy can play with anyone because he makes his own space out there, does not rely on anyone else to do the work for him.
Corsi Clown – Elias Lindholm (31.82%) with linemates Johnny Gaudreau (36.16%) and Matthew Tkachuk (37.76%) were the three low men tonight. Across the board Montreal gave them nothing to work with. Look this is the first down game they’ve had in 13 tries after being ridiculously elite, that gets them a temporary pass from harsh criticism. They’re going to be mentioned as the low men in coming sections, but they simply were not good in this one. Burn the game tape and try again tomorrow.
Taken By Chance – They get praise and criticism tonight. At 5v5 Nikita Zadorov (54.22 SCF% // 100 HDCF%) and Erik Gudbranson (61.60% // 100%) did not allow a high danger chance against. On the PK that’s another story (which we’ll tell in Today’s Specials), but at 5v5 they did their job. The pair that really struggled tonight (and it was very noticeable via eyes) was Rasmus Andersson (40.41% // 0%) and Noah Hanifin (37.86% // 0%). As you can see, they didn’t generate a single high danger chance for – they could not move the puck through the NZ. Hate on Zad and Gud all you want, but at 5v5 they were nowhere near as big a problem as Andersson and Hanifin were against the Habs.
xGF% – Five players finished below 40%, and if you’ve read the above sections, you can easily guess who the 5 were. Elias Lindholm (18.0 xGF%), Johnny Gaudreau (22.39%), Matthew Tkachuk (23.34%), Rasmus Andersson (24.65%), and Noah Hanifin (25.75%). Simply put if those 5 guys are your worst performers, you’re going to have a hard time winning the hockey game. BURN THE TAPE, MOVING ON
Not completely I guess – Blake Coleman (80.04%), Andrew Mangiapane (74.15%), and Sean Monahan (71.60%) deserve praise as they clicked.
Game Flow –

The adjusted line is what is important here. When factoring in everything at no point did Calgary ever truly gain momentum. The Habs pushed back at the same (if not better) level Calgary was pushing at from puck drop. 5v5 Calgary remained great at limiting chances, and if they can somehow stay out of the box they could win these games.
Game Score – Top score of the whole game – either team – Sean Monahan (1.95 game // 0.42 season average). If Mangiapane (1.79 // 1.16) can help in the Monahan rehabilitation project – while also getting an increase in ice time – then I’m all for it. Through the 12 previous games Monahan hadn’t really shown anything to deserve a promotion, but now that he’s got one it’s in everyone’s best interest for him to re-find success.
Shot Heatmap – 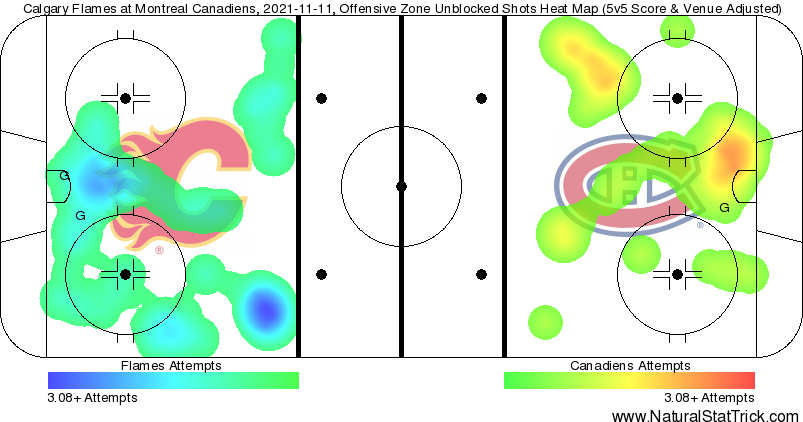 Two days ago i wrote how nice it was to always see the super heavy volume of shots around the opponents goal mouth that Calgary always was creating. Now I’m here telling you that they really went to the left point because the Habs closed off the path down low. Two of the best teams to do this in recent years are the Stars and Habs – and both teams were successful to a certain extent at doing it to Calgary. It’s frustrating but these are the games they need to have happen to them so they can learn to fight through it and find ways to score hard goals.
In The Crease – No medium or low danger goals tonight from Markström… at 5v5. That Suzuki goal to make it 3-2 was not pretty. Yeah, Gudbranson got beat, and yeah Coleman turned it over in the NZ, but that goal should never go in. 1.28 expected goals against, 0.944 5v5 SV%, one high danger goal against. This game was lost on special teams, and speaking of special teams…
Today’s Specials – … the Flames aggressive PK burned them tonight. It’s been a tremendous success so far, but they also hadn’t been taking too many penalties. This one saw them right up there in calls against like they were in the Edmonton game to start the year. While the Habs don’t have a McDavid they still have competent players and it ended up burning them tonight. Gudbranson’s PK playing had been a strength so far but was a clear weakness in this match. Coleman’s NZ battle was lost and the Habs quickly took the puck the other way – and Suzuki had Gudbranson turned around at the top of the circles. Mobility is needed and I think (in my own opinion) it’s time to see Valimaki come back in for one of the big guys.
Player Spotlight – Mikael Backlund – The first goal felt so random. Usually, Calgary must work hard to fight for a goal from the slot. We have not seen random tips with no traffic go in for the Flames very much this season. Backlund himself played a very structured game and won his matchup at 5v5 handily. He gets highlighted because he’s a good hockey player who did good work, simple as that.
Flashalytic’s 3 Stars –
1) Andrew Mangiapane
2) Mikael Backlund
3) Oliver Kylington
The Flames continue their 7-game road trip quickly, with a game against the Toronto Maple Leafs at 5 p.m. MT on Fri., Nov. 12. It will start a little later as the Hall of Fame class of 2020 will be honoured before hand – and yes that includes Flames legend Jarome Iginla. Spread the Iggy love folks!
(Stats compiled from Naturalstattrick.com // Game Score from Hockeystatcards.com)
Uncategorized
Recent articles from Shane Stevenson