Beyond the boxscore – G14: The loser point is a Flames’ best friend By Shane Stevenson
1 year ago
I expected Toronto to push Calgary, but I never expected them to dominate them with little to no resistance. Now I’ll give Calgary some credit – they were very good positionally in their own end. Really never allowed the Leafs to create anything from the middle of the ice – especially in the first. However, they spent way too much time in their own zone and failed consistently to transition the puck with even the slightest bit of success. That weird flip into the neutral zone where the puck didn’t ever get deep enough for the players to change was by far the worst thing tonight – outside the execution of their lone power play.
CF% – 49.3%, SCF% – 47.58%, HDCF% – 59.7%, xGF% – 44.76%
It’s a Team Game – So they win the high danger battle, pretty much end up even on the shots directed toward the opponent’s net. That’s after the SVA adjustment, the Leafs clearly won by raw totals. It can get lost as the game drags on, but Calgary did get a few chances early in the first right from the slot. They also played extremely physical, and the Leafs seemed unphased by it, kept on just executing their gameplan the best they could. Ultimately the Leafs skilled players got the job done in overtime.
Corsi King – Positive news tonight was the bounce back from the top line. Matthew Tkachuk (66.96 CF%), Elias Lindholm (61.65%), and Johnny Gaudreau (61.62%) led the way here with the odd thing being three defencemen also being above 50%, but none of them from the same pairing. Plenty of PK effects on some players tonight. Lindholm won’t usually see those as he normally doesn’t end the penalty kills.
Corsi Clown – The big man Milan Lucic (33.78 CF%) was the low man with Tyler Pitlick (37.22%) just behind him. Mikael Backlund (38.52%) had a rough night matching up against Auston Matthews. That’ll happen some nights. Erik Gudbranson (44.03%) had some PK effects in his numbers, but a lot of what he got was deserved tonight. He has been willingly giving up the defensive zone far too easily lately, but he has too because he doesn’t have the skating ability to get himself back into position if he fails and his partner doesn’t have the skating ability to cover him. A conundrum easily fixed by playing the Finnish lad that was in the press box.
Taken By Chance – Speaking of Gudbranson (29.97 SCF% // 0 HDCF%) he got buried in his own end and was one of the worst at defending high danger opportunities tonight. His partner Nikita Zadorov (41.30% // 15.96%) allowed a team worst 6 high danger chances while Gudbranson was at 5. Leafs fed on them who could have ever guessed that… oh right – myself (see below). There was some light from two Flames lines though, Sean Monahan (62.51% // 100%) and Blake Coleman (66.02% // 100%) never surrendered a high danger opportunity. The Flames top line all finished well above 50% and Oliver Kylington (50.75% // 88.86%) helped create seven high danger chances himself.
xGF% – Blake Coleman (71.17%) needed a strong game and he got one. He’s shown a natural instant chemistry with Andrew Mangiapane (63.27%) which almost everyone predicted would happen over the summer. The numbers are good through two with Sean Monahan (64.88%) in the middle. Monahan’s foot speed has noticeably gone down – I hope he’s just still rehabbing and it’s not a permanent after effect from his injury.
Game Flow –

Leafs grabbed momentum off the hop – Flames did themselves no favours going into the second down a man – and finally showed a bit of life in the third after Kylington’s beautiful goal. Not really the best start to a season long seven game road trip with Calgary getting outplayed in both, but the schedule rolls on regardless. It’s not going to slow down and wait for the fun Flames to come back, they’ll have to find that game themselves.
Game Score – Dan Vladar (1.19 in game // -0.11 season average) was the top man tonight – and rightfully so. If any subpar goaltender were in net for Calgary the Leafs would have blown them out. Which after seeing the top 6 post solid numbers and the bottom 6 getting buried really shows the Leafs depth won their battles. Weird considering everyone mentions their lack of depth. Specifically the speed of Ondrej Kase gave the fourth line troubles.
Shot Heatmap – 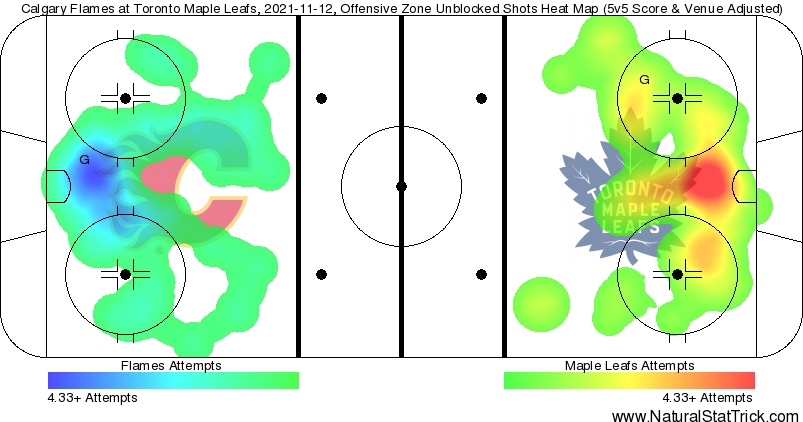 Calgary did a good job of getting to the goalmouth again when they could. It’s priority number one for them to shoot from the middle of the ice. Toronto does the same thing too, and Vladar had the answer for everything in tight, but got beat from distance tonight. No criticism for him though – without him it isn’t close… but without Campbell the Leafs could have been in trouble too.
In The Crease – 2.48 expected goals against and it took an absolute rocket by William Nylander off an unfortunate turnover for Vladar to get beat 5v5. He was easily the steadiest presence in the game for Calgary through 40 minutes and deserves praise for what he did. Performances like this will earn you some extra games between the pipes… usually. When the other guy you compete with has 4 shutouts already that’s a real competitive crease. I’m not complaining though – we’re a hefty way away from the Irving/Hiller/Ramo/Ortio days.
Today’s Specials – The Flames finally got a power play late in the game, but you wouldn’t have been able to tell. The most dangerous chance was from Mitch Marner. Can someone not named Johnny carry the puck into the zone? This squad dumps it more than carry’s it in when they have the advantage. Everyone plays like they’re scared to turn it over but eventually someone must try and skate it in – and its always Johnny or Mange. Please coaches, fix your break-in. Everyone that uses this drop pass stuff tends to go on prolonged periods of failure – do something different.
Player Spotlight – Jarome Iginla – Thank you Jarome. The induction into the Hockey Hall of Fame was beyond deserved. You gave everything you had to the city of Calgary when you were here, and you gave even more than that back to the fans. You were the best leader both on and off the ice. I have fond memories of shooting the puck around as the streetlights came on, snow lightly falling, and my mother calling me for dinner. I could never go inside without passing the puck to Iginla for a game winning goal. You are one of – if not the primary – reason I fell in love with this game. So thank you Jarome, and please enjoy the achievement you so rightfully deserve.
Flashalytic’s 3 Stars –
1) Dan Vladar
2) Oliver Kylington
3) Johnny Gaudreau
The Flames’ next game comes Sunday from Ottawa at 3 p.m. MT. All covered right here at BTB at FlamesNation.
(Stats compiled from Naturalstattrick.com // Game Score from Hockeystatcards.com)
Uncategorized
Recent articles from Shane Stevenson