Beyond the boxscore – G2: Dominating losses

By Shane Stevenson
1 year ago
Every year those game(s) come along where you do everything right and you still don’t win. It’s even more painful to have that happen at the start of the season. Something like this is a lot easier to swallow if you have a record of say 7-3-1, or 26-22-3 even, but when you’re 0-1-0 everything is extrapolated to higher levels. No more stalling let’s get to talking about how the Flames should have won by 3+ goals.
CF% – 61.77%, SCF% – 74.5%, HDCF% – 67.6%, xGF% – 67.54%
It’s a Team Game – These numbers weren’t just better than what they had against the Oilers; these were significantly better across the board. There was no lull in their game – from puck drop on the tilted the ice completely towards the Ducks end. The most positive thing was in the third period the Flames pressed harder, 7 high danger chances to 2 for Anaheim. They wanted to get that 2-goal lead to bury the opposition but just couldn’t capitalize. Replay this game 100 times the Flames win at least 70 (if not more) of them.
Corsi King – Blake Coleman (75.25 CF%) what a debut, buried that beautiful breakaway feed from Johnny Gaudreau (52.93%). Best defensive pair was, for a second game, Juuso Valimaki (71.29%) and Erik Gudbranson (73.03%). I don’t expect this strong play from Gudbranson to continue, but boy will I welcome it with open arms. Third pair right Ds with terrible underlying numbers (horrendous even) from the previous 3 years have found ways to succeed with Sutter before – see: Michael Stone last year. I’m not going to bet any money on it continuing, but again I’m not going to wish its disappearance.
Corsi Clown – The big defensive match-up semi-falters in its second countable game together. Chris Tanev (47.03%) and Nikita Zadorov (47.03%) continue to struggle transitioning the puck up the ice well. They defended alright tonight, still contributed to creating chances at a high rate they just saw more total attempts go towards their net (hits, misses, blocks all rolled into one) than they had go towards the other net.
Taken By Chance – The most positive section here – the lowest Flames in SCF% was Matthew Tkachuk (61.19 SCF% // 59.13 HDCF%) which is insane. Most nights that’s a top 5 player for you, this was Calgary’s lowest all situations rate. 4 players finished under 50% in HDCF%: Trevor Lewis (31.13 HDCF%), Glenn Gawdin (48.24 HDCF%), Brett Ritchie (48.24 HDCF%) all whose job is to not get scored on instead of doing the scoring. The fourth was Rasmus Andersson (49.09 HDCF%) who was so close to breaking even it’s not worth remotely worrying about.
xGF% – Brett Ritchie (87.76 xGF%) had his second straight game helping get chances at a high rate. He was serviceable last year and is meshing well with his linemates. Sean Monahan (80.92%) at 5v5 was solid, noticed him myself a few times tonight. Unfortunately, the most notable instance was the mix up with him and Noah Hanifin (64.36%) in overtime. 3v3 is a wildcard as is, but Hanifin strolled right behind the Ducks players a little too carefree for my liking. Monahan was already in deep behind one Duck, Hanifin trying to walk through the other two Ducks and leaving Johnny Gaudreau (58.57%) to defend a 3 on 1 by himself. Needless to say, it didn’t end well.
Game Flow –

That giant 5v5 stretch – the one that saw momentum do nothing but tilt towards Calgary the entire time? That’s what you want to see every single game. It is SO HARD to say they did all the right things and then see OTL beside the score. The hockey gods sometimes laugh at us, and it hurts.
Game Score – Johnny Gaudreau (2.96) was top player tonight. 9 of the top 10 players here were Flames. It’s obvious who the lone Duck was (Gibson). Others not mentioned very much with positive scores/impacts: Andrew Mangiapane (0.85), Dillon Dube (0.22), and Blake Coleman (1.81). Mikael Backlund (-0.14) was the low skater, but Markstrom (-1.14) had the lowest score of everyone on the Flames.
Shot Heatmap – 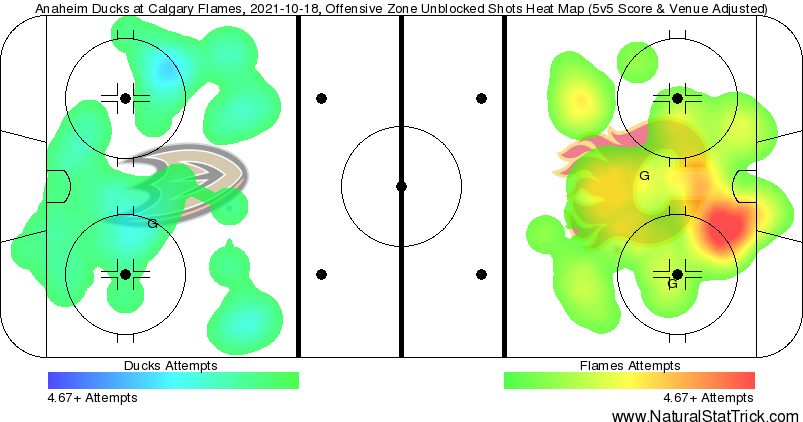 Heavy shots from in tight while the Ducks really didn’t get heavy chances from in tight. Two games in and Calgary is attacking the crease hard, maybe one day the puck will actually start bouncing their way. Not every bad team has John Gibson to bail them out.
In The Crease – Markstrom was solid again, except for one goal that he would like back. It’s not his fault that Rickard Rakell was left wide open, but Rakell didn’t exactly shoot it from in close. Don’t get me wrong the shot was dead-eye accurate, but you still want him to have it. 1.51 expected goals against, 0.955% 5v5 save percentage with the goal being classified as medium danger. Most nights that’s just fine, but in this one that medium danger chance on the one mistake they made in the last 10 minutes of the game made them pay. Frustrating stuff.
Today’s Specials – Johnny Gaudreau on the power play was great to watch. His head was up, puck was on a string, and he was looking to pounce. He did an entire lap with the puck, playing give and go with Tkachuk down low, Monahan in the middle, and Andersson at the point. He always looked for the backdoor to Lindholm but kept the shooting threat alive by letting a couple rip. Again, deserved a goal but John Gibson was there.
Player Spotlight – Rasmus Andersson – Huge start for maybe the number 1 player in need for a bounce back season on this team (argument could be made for Monahan). Andersson wasn’t injured last year he just struggled playing the same superstar’s game after game. The Pandemic season wasn’t kind to young defenceman around the league and Andersson was no exception. Keep him with Hanifin and better comes than bad.
Flashalytic’s 3 Stars –
1) Johnny Gaudreau
2) Blake Coleman
3) Juuso Valimaki
(Stats compiled from Naturalstattrick.com // Game Score from Hockeystatcards.com)
Uncategorized
Recent articles from Shane Stevenson