Beyond the boxscore – G8: Domination over Flyers 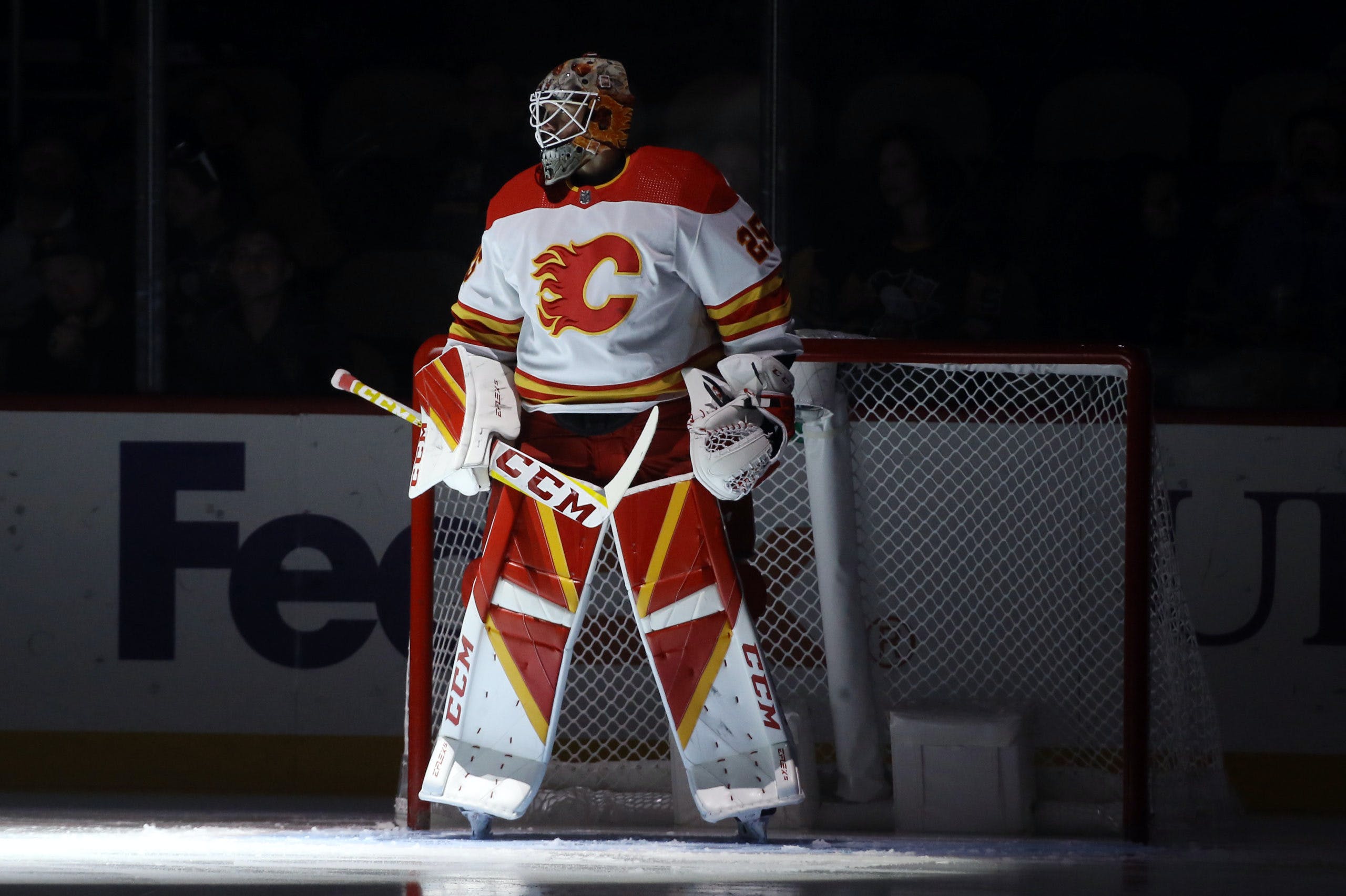 By Shane Stevenson
1 year ago
We really need to ask the question whether the Flyers even showed up to the rink. They were on a roll and had three of the best forward lines (in terms of xGF%) in the league coming into this affair – and did absolutely nothing. The Flames had the puck almost the entire game it seemed. Seamlessly cutting through the neutral zone and into the attack with possession. When they dumped the puck they were hard on the forecheck. Their goalie didn’t let anything by for a second game. Ladies and gentlemen – the Flames are on a roll.
CF% – 61.28%, SCF% – 70.37%, HDCF% – 75.6%, xGF% – 61.32%
It’s a Team Game – It’s impressive to have one or two players finish a game above 60% expected goals – the team did that in this contest. The first two periods were a masterclass of possession-based hockey where the Flyers only generated nine shots on goal. The Flyers were also top five league-wide in goals coming into this one and they just generated nothing against a relentless Flames transition game. This is definitively a high point so far of this current win streak which now stands at six games.
Corsi King – Chris Tanev (81.79 CF%) & partner Oliver Kylington (81.08%) were an absolute force tonight. They played against primarily the Flyers middle six, but as mentioned earlier that was no small feat. Three more players finished above 70% – Dillon Dubé (78.41%), Andrew Mangiapane (77.13%), and Elias Lindholm (70.73%). Really my cutoff for “alright” is around 48% because that means you were still relatively equal on all situation chances (whether blocked, missed, or hit – Corsi) and in this one only three players were below that.
Corsi Clown – Erik Gudbranson (34.65 CF%) was at the bottom with Blake Coleman (39.60%) and Nikita Zadorov (41.53%). Now having a low Corsi does not mean you had a bad game. Coleman in this one finished with no high danger chances for or against as well as a higher overall quality created than given up. That still statistically says Blake Coleman played really good defensively, but he struggled to create or transition well in this game. So he may not have created offence but he was effective in his defence. The other two… not so much, more on them later.
Taken By Chance – Chris Tanev (89.05 SCF% // 100 HDCF%) and Kylington (89.05% // 100%) were out there for seven high danger chances while having none come against them. For reference the entire Flyers team generated three high danger chances collectively. Kylington and Tanev more than doubled the Flyers in this game. Mikael Backlund (49.65% // N/A), Tyler Pitlick (40.21% // N/A), and Blake Coleman (25.45% // N/A) all finished on the lower end of the overall scoring chances created but surrendered no high danger chances against. No, the group that gave up multiple high danger looks were Milan Lucic (66.43% // 32.68%), Sean Monahan (54.71% // 24.60%), Nikita Zadorov (45.37% // 0%), and Erik Gudbranson (36.19% // 0%).
xGF% – Some quick shout-outs to Elias Lindholm (86.87% xGF%), Rasmus Andersson (72.48%), partner Noah Hanifin (50.64%), Johnny Gaudreau (62.39%) and Matthew Tkachuk (60.90%) for all posting great numbers against top shutdown competition. Sean Couturier is a former Selke Trophy winner and tonight he couldn’t contain the majority of the Calgary Flames. Now we need to talk about the one thing that did NOT work last night: the third D-pair.
I usually give Gudbranson a pass because he has been effective on the penalty kill. He had a great first two games, but everything has been trailing off since. Every time in this contest the Flames got pinned in their zone for extended time it was because neither Zadorov or Gudbranson couldn’t move the puck. Now that’s neither of those players true strengths – we knew that – but when they’re getting out-muscled off pucks? That’s no good. Välimäki better have enjoyed his popcorn, there’s zero excuses not to insert him back in the lineup when the bottom pair performed as bad as they did – especially if we’re preaching accountability.
Game Flow –

The great mountain of Flames dominance. The first period felt a lot more in the Flames favour than this flow chart indicates – but the second shows just how much Calgary took off. I know high danger chances were 9 to 2 in favour of Calgary through two (just at 5v5!) and they probably felt they could have had a few more goals. That didn’t get to them though and the kept to the plan in the third clutching out the victory. The Flames are getting more dangerous by the day because they’re starting to believe they can beat anyone at anytime – no matter how many goals have been scored.
Game Score – The top 12 scores: all Flames. Something to point out is even though Sean Monahan (1.00 game // 0.35 season average) had the more significant boxscore impact with the goal and the assist he still finished 10th on the team. His line wasn’t too tremendous at 5v5 tonight, was a weak spot in the armour as a unit. Oliver Kylington (1.93 // 0.81) was classified as having a breakout performance by the website’s metrics. Honestly if the Flames top two defence pairs keep up their performances for an extended time the Flames are going to be in a very good spot – and yes, Kylington is included in that top 4.
Shot Heatmap – 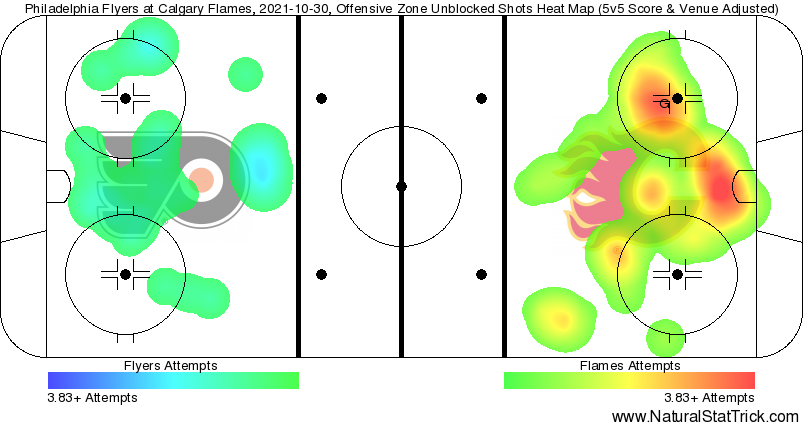 I’m beginning to enjoy the opponents heatmaps being devoid of any dark colours game after game. Calgary got right in Hart’s face and he largely did a really good job. He kept his team in it for a long time before finally surrendering a beautiful tic-tac-toe goal on the Flames power play. Johnny Gaudreau’s tally in garbage time was the only 5v5 goal scored – rack up those points Johnny!
In The Crease – 1.12 expected goals against, 1.00 SV%, no goals against. Last game this section was all praise because Markstrom did everything to win Calgary that contest. This one Jacob had a lot more time to think of other things. He could have had a nap at certain stretches through the first 2 periods because Calgary hardly let the puck leave their sticks. There are 74 more contests left in this season for Markstrom to set a new career high in shutouts at four – I don’t think that will be much of an issue if the team plays like that in front of him.
Today’s Specials – Can’t really come on here and criticize the power play when it was clicking tonight can i? Rasmus Andersson did what had to be done to get the first goal – instead of everyone standing around and just moving the puck around Razz took It upon himself to skate laterally across the ice into a proper passing lane. Instead of waiting for the lanes to open up for you, open them up yourself using your feet. I still might preach for Hanifin on the top unit at some point in the year, but for right now I’m not opposed to let Razz do his thing.
*Note: He sure has been fantasy relevant with 6 assists in 8 games. If you need a D that gets power play points I wouldn’t wait and would grab him now.
Player Spotlight – Chris Tanev – Every now and then I like to use this section not to shoutout someone for what they did in the game, but someone who’s just played consistently good all around. Chris Tanev is off to an absolute fantastic start rivalling what he and Hanifin did to start the last campaign. He’s reliably defending some of the best competition in the NHL on a nightly basis and making it look natural. If there ever was a signing, I was wrong about it was his. I assumed he’d be serviceable for two years before falling off in play, but he’s been defensively elite so far with no hints of dropping off anytime soon. Go off Tanev, you’re killing it.