Beyond the boxscore – P4: Push the play 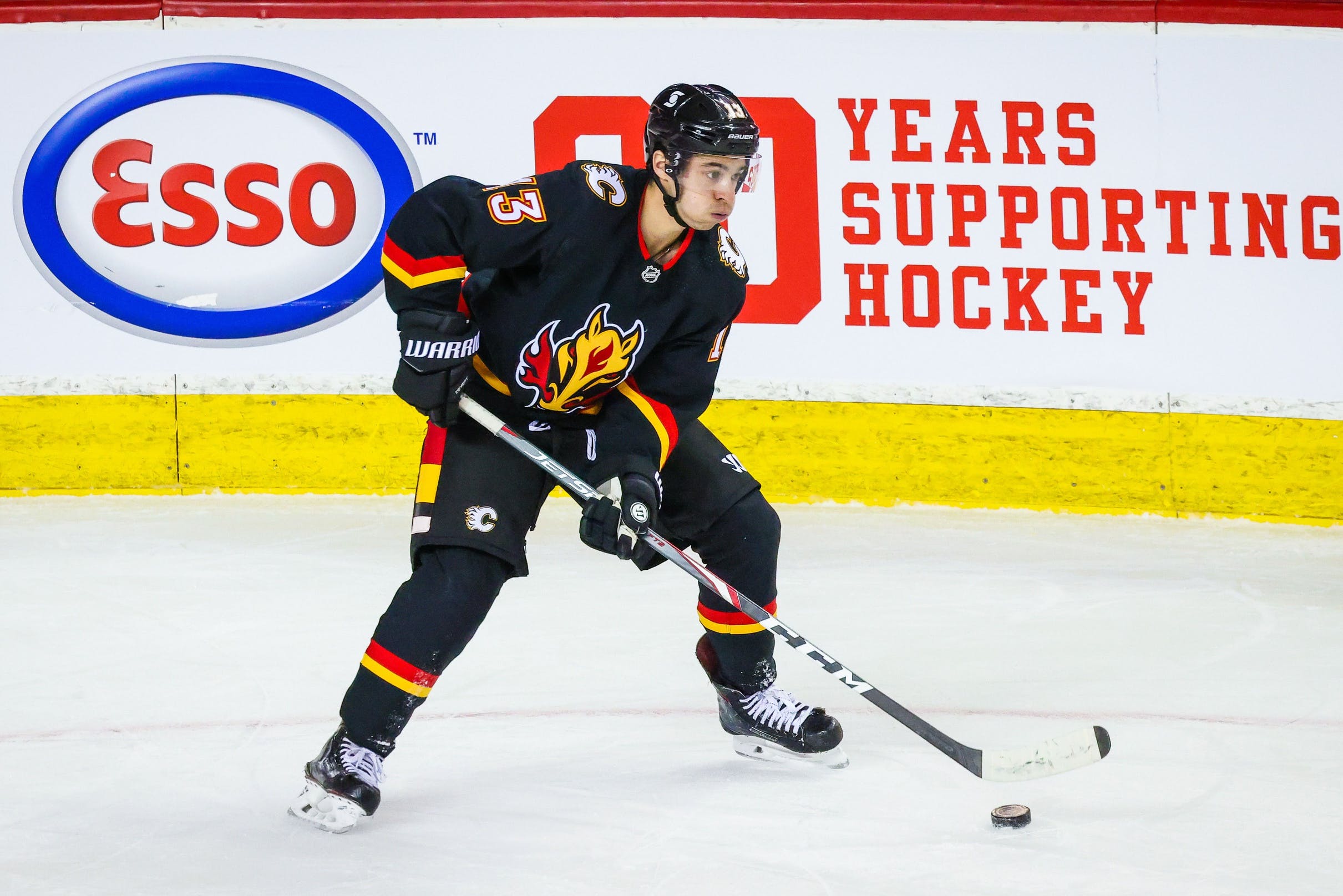 By Shane Stevenson
1 year ago
Can we talk about that never-ending shift in the third period where the Flames spent multiple minutes just burying the Canucks in their own zone. Now that was entertaining to watch for Flames fans. Yes we still need to preface everything with the “it’s pre-season” reminder, but that doesn’t mean it wasn’t any less fun to watch. Time to see who was driving the play, and who was struggling.
CF% – 56.64%, SCF%  -61.00% , HDCF% -55.63% , xGF% – 62.71%
It’s a Team Game – It was pretty one-sided right from the onset. The Canucks made a valiant push-back and showed some life in the second but the Flames took momentum back and cruised to the finish line. Thatcher Demko deserves some props – he showed he was on his game tonight. All-in-all the Flames players that need to be on their best every night brought it here.
Corsi King – Brett Ritchie (85.87 CF%) was king of the forwards with Dillon Dube (77.45%) and Andrew Mangiapane (73.04%). Others over the 65% threshold included Chris Tanev (75.86%) and Oliver Kylington (67.24%) who are seemingly meshing on an interplanetary level at the moment. Almost every minute on the ice together has led to quality Flames play.
Corsi Clown – The ones at the bottom were your fringe guys. Justin Kirkland (29.93%), Emelio Pettersen (34.79%) & Byron Froese (34.92%) – all three of which are most likely bound for the AHL based on how camp is shaping up. Bad news/good news situation. Bad news is Nikita Zadorov (40.51%) and Rasmus Andersson (39.92%) weren’t jiving on a high level again last night. Good news is that was the best game they’ve played together so far. They’ve got maybe one game left in them, but really at this time it’s fair to maybe try them on some other pairs while the points don’t count.
Taken By Chance – Brett Ritchie (89.64 SCF% // 100 HDCF%) really was on it tonight. Kudos to him, it always just boosts your mood after a strong game like that. Chris Tanev (81.12% // 74.77%), strong again – I would like to point out that he may not have gained an assist on Gaudreau’s goal but without his nifty quick transition out of the zone that goal doesn’t come close to happening. Nice sauce their Tanev. Oh and Johnny Gaudreau (75.38% // 71.78%) was back doing Johnny Gaudreau things.
xGF% – Ritchie (95.35 xGF%), and Dube (84.97%) were tops here again – worth noting Tkachuk (70.19%) and Lindholm (66.88%) were able to bounce into the heavy positives after drifting off ½ way through the previous game. All the power plays really help when you don’t score on them. The player comes out of the box – the stats start counting 5v5 – and all the players currently on the ice get a boost if they maintain possession a little bit. Something to watch for when you’re reading up on stats like this.
Game Flow –

The most promising sign for me in this one is that after the two Canucks power plays in the mid third period ended the Flames were able to re-establish their strong play and didn’t let the penalty killing get to them. They came over the boards and kept their foot on the gas right until about five minutes left when they locked it up defensively.
Game Score – The section of the article where the boxscore is helped to be included in the beyond we have Johnny Gaudreau (3.20) as our clear front runner. A nifty goal (nice work catching the pass with your skate JG), an assist as well as showcasing his hands and vision plenty of times tonight, he’s dynamic to watch play. Really nice to see Connor Mackey (1.88) up his average score after he too was on the rough side to start the pre-season. The bottom Flame that will make the team is Rasmus Andersson (-0.37)
Shot Heatmap – 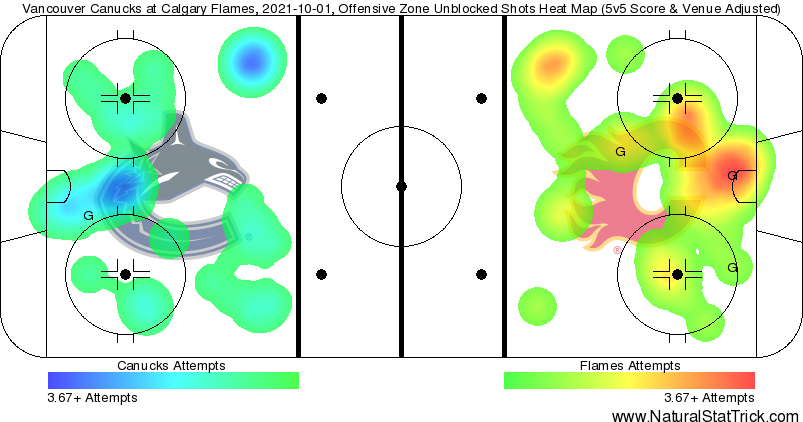 The Canucks were able to get to the slot a fair bit, but a very minimal amount in close to the crease. The Flames on the other-hand surrounded Demko like a pack of hungry piranhas. Johnny’s goal off to the side their wont get the classification of how dangerous his chance really was. Nifty passing by Tkachuk and especially Lindholm to thread the needle across traffic right to Johnny.
In The Crease – He wasn’t that busy at 5v5 (just 4 shots faced in 14:27), but Dustin Wolf looked agile and very reactionary. 2 high danger chances in one period worth of ice time. Markstrom was good too. Team played so good in front of both goalies they hardly were tested to too much of an extent. The goal Markstrom allowed wasn’t a fluffer, it came from the dangerous area of the ice. If you’re going to get beat that’s the area it’s acceptable from.
Today’s Specials – I wanted to give the power play props for actually pushing play and not spending most of the power play trying to break in the zone, but 7 minutes of PP time and no goals? You’ve got to have one in there guys. I’m happy with what I saw today, especially the mobility on the unit – let’s hope it comes together this year.
Player Spotlight – Walker Duehr – If I’m being truthfully honest my expectations for what Duehr was or could be weren’t that high. I had him pencilled in at Stockton and that’s where he was going to be. He is almost certainly going back to the AHL, but he’s been noticeable in all of his games played. Walker’s shown a real ability to be a good bottom six player that isn’t afraid to chase the puck into the corner, or ensure it gets out of his own zone at the blue line – all the time. We always want to find the flashy ones but getting a mucky fourth liner that can play defence (could still use some rusting here, but he has a solid base) is a luxury and Duehrs shown some potential in that regard.
Flashalytic’s 3 Stars –
1) Chris Tanev
2) Johnny Gaudreau
3) Brett Ritchie
The Flames continue their pre-season action Sat. Oct. 2 against the Seattle Kraken in Kent, Washington. The action starts at 8 p.m. MT.
(Stats compiled from Naturalstattrick.com // Game Score from Hockeystatcards.com)
Uncategorized
Recent articles from Shane Stevenson