Beyond the boxscore – P7: Highs and lows 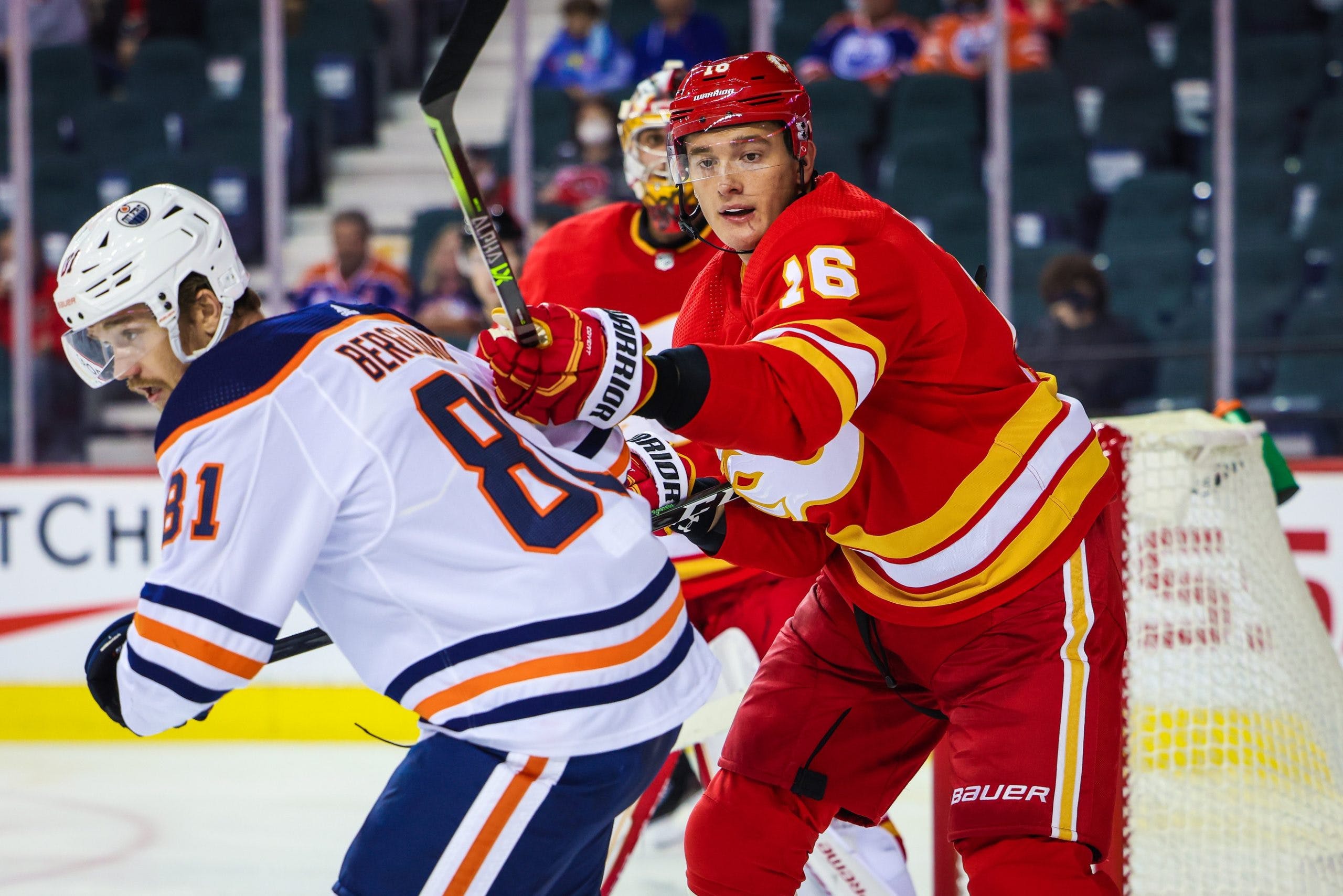 By Shane Stevenson
1 year ago
Wednesday’s game was like a mountain – the Flames started off in a valley not doing much, then they rose to their peak in the middle of the journey, before coming back down to another valley where not much was going on for them. Winnipeg was the better team; Nik Ehlers was fantastic against many Flames tonight. Forwards were carrying it with possession when they could, but some of the Flames D weren’t making very friendly breakout passes.
CF% – 44.01%, SCF% – 44.63%, HDCF% – 34.66%, xGF% – 43.44%
It’s a Team Game – This review is going to resemble the first pre-season game against the Oilers, which really isn’t a compliment at this point. The team needs to be ramping up, although after their last pre-season game they don’t play for over a full week, but I digress – taking visible steps backwards this late in the pre-season just sucks to see from a fan perspective. The Flames will have that hopefully ironed out in a full week of intense practices after the starting roster is announced Oct. 11.
Corsi King – Dillon Dube (58.03 CF%) led the charge with linemates Brett Ritchie (58.03%) and Andrew Mangiapane (54.47%). Chris Tanev (52.27%) was able to help Nikita Zadorov (55.69%) be on the right side of 50% for the first time this postseason. Zadorov himself played better than he has of late – he’s one of those players that have had struggles transitioning the puck on the back end so far, but tonight he was able to be out for more attempts against the Winnipeg net than attempts against the Flames net – and in a game when you were out-shot by 25 that means something here.
Corsi Clown – Noah Hanifin (27.29%) and Rasmus Andersson (29.49%) were visibly the most mobile D tonight. When I watched I noticed them on the breakout a lot – and there’s a reason for that. They were breaking it out so noticeably because they were shelled into their own zone at 5v5. 13 total players finished on the bottom side of 50%, the best of which came from Oliver Kylington (47.26%)
Taken By Chance – Nikita Zadorov (64.05 SCF% // 52.55 HDCF%) defended well tonight – seriously he did. No major blunders from him other than that one interference penalty. Was it him or Chris Tanev? I don’t care. As long as they play well as a pair consistently that’s what matters. Matthew Tkachuk (55.42% // 0.00%) we’re going to discuss later, but Brett Ritchie (57.40% // 52.11%) had something going on again tonight. Third game this pre-season he’s had high numbers – I’m not going to tell you it’s sustainable play for the long run, but I’ve noticed him out there not making any real defensive blunders.
xGF% – Elias Lindholm (20.40 xGF%) was on the wrong side of the Winnipeg top line tonight. Nik Ehlers ate the whole team alive with possession, chances, and 2 goals. Unfortunately, Lindholm couldn’t contain him but that’s okay. You’re not always going to have great nights, one blip on the radar isn’t much for the Flames current #1C.
Game Flow –

Winnipeg really had a dominant first period – Flames were in the hole off the start. There was some second period pushback but in the end the Jets pressure never relapsed.
Game Score – Matthew Tkachuk (1.41) has noticeably been one of the better talents on the ice this pre-season. His last 3 games especially have been a lot better – he seems here to play this season and that bodes well for the Flames chances to be somewhat more competitive. Glenn Gawdin (1.20) and Blake Coleman (1.09) were the other Flames to finish above 1.00. Down at the bottom we had Andersson (-1.12) and Hanifin (-1.02)
Shot Heatmap – 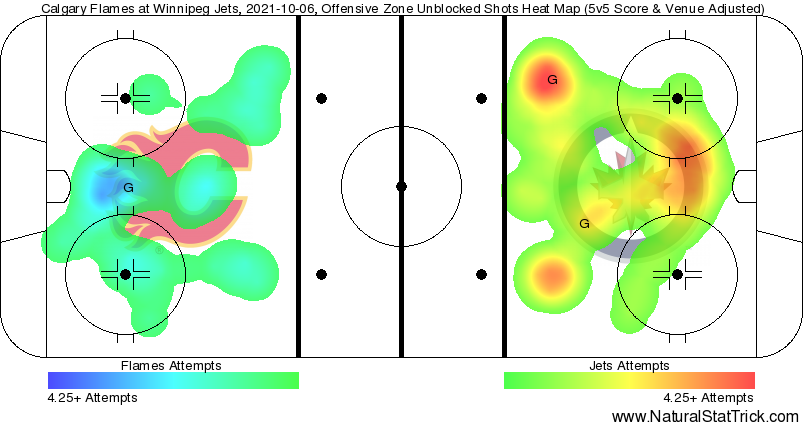 That’s a lot of heavy chances in front, specifically in the slot. Oh right sorry – against the Flames not for. While they did good to get to the slot themselves when they did get a chance, they just didn’t do it often enough – and not much was defended well tonight in any version of its definition.
In The Crease – Darth Vladar was good tonight, but there’s a couple goals he would like back. Both the first two goals by the Jets were from distance without much traffic – those you can’t let by you consistently in the NHL. He’s only 23 though and the rest of his game is so well rounded – extremely athletic individual. Faced 1.88 expected goals against and let in one medium danger chance and one low danger chance. 5v5 SV% of .939%.
Today’s Specials – While at 5v5 they weren’t their best, Hanifin and Andersson moved the puck around tremendously well in the offensive zone on the power play. Kylington made a nice play to keep the puck in play that led directly to Mangiapane’s goal too. Power play was able to re-gain entry to the zone with possession and there was no drop back pass. Leave that drop back pass in 2020 and never let it live again.
Player Spotlight – Matthew Tkachuk – He’s got his game back in the pre-season. He’s got that compete in his game showing whenever he has the puck on his stick. He’s making beautiful passing plays in the attacking zone, protecting the puck down low, and back-checking with hustle to create good defence. It’s also a contract year for Chucky – could be a huge bounce back candidate this year.
Flashalytic’s 3 Stars –
1) Matthew Tkachuk
2) Dillon Dube
3) Andrew Mangiapane
HM) Nikita Zadorov & Chris Tanev, for somehow being on the positive side of all these shots taken tonight.
The Flames end their Pre-season back at the Saddledome October 8th at 7pm. The game will be broadcast on TSN3 again.
(Stats compiled from Naturalstattrick.com // Game Score from Hockeystatcards.com)
Again we’ll end this column with a tweet from the interweb about Gudbranson. Enjoy.
Uncategorized
Recent articles from Shane Stevenson