Beyond the boxscore – P8: Now we wait… By Shane Stevenson
1 year ago
Am I concerned about “slow” starts? Yes, because it happened again (more on that down low). When the top guns hit full stride were they dominant? Yes, they were. That second period was an awakening for the Flames who dominated the Jets defence and were able to get high danger chances in abundance. Hockey is a very unforgiving game by nature – the team that plays better doesn’t always get the W. Calgary didn’t even score at 5v5 until the third period. Most notable was the fact the Flames didn’t let anyone get to their net tonight – the majority of Jets chances came from above the hashmarks.
CF% – 53.12%, SCF% – 54.56%, HDCF% – 90.2%, xGF% – 59.21%
It’s a Team Game – Like we said the Flames got off to a “slow start”. Yes they knocked the two power play goals in early which is what’s needed to win, but at 5v5 the first period was all Jets… sort of. The Jets dominated possession, total scoring chances, and even expected goals – but no one of them were classified as high danger. The Flames shut play down in front of their own net tonight and made the Jets shoot from distance – making Markstrom’s night easier.
Corsi King – Rasmus Andersson (67.69 CF%) and his 3-assist night was well deserved. What a huge and most certainly needed game from him. Winnipeg iced an NHL lineup tonight and he didn’t flinch – letting the chemistry with Noah Hanifin (65.27%) flow. The Flames are going to need whichever pair Razz is on this year to shine to find consistent success – he has the tools just needs the consistency. Before the game I highlighted one line I was intrigued to see (see tweet). Tonight Mikael Backlund (67.53%), Dillon Dube (64.89%) and Andrew Mangiapane (63.58%) delivered.
Corsi Clown – He’s played a lot of games this pre-season, and strong ones too, but tonight Oliver Kylington (28.30 CF%) could not keep the puck out of his zone. Erik Gudbranson (34.88%) – Justin Kirkland (30.68%) – and Brett Ritchie (33.57%) were others to struggle tonight.
Taken By Chance – Worth noting Brad Richardson (100 SCF% // 100 HDCF%) was killing it in 3:46 of 5v5 TOI before leaving due to injury. Andersson (77.69% // 100%) had a loud hundred percent high danger chance ratio – they aren’t all built the same. For instance, Milan Lucic (76.31% // 100%) got 2 high danger chances despite surrendering none whereas Razz had 9! Some like Jusso Valimaki (43.89% // NA) and Chris Tanev (58% // NA) didn’t register a high danger chance for or against. It’s why you must go beyond the ratios when making any serious allegations.
xGF% – Rasmus Andersson (82.79 xGF%) was just ridiculous tonight. I could mention him in almost every category in this review. His partner Hanifin (79.34%) has looked good coming back from shoulder surgery. He’s poised to be better than you think (Hint: fantasy owners, he’s a good late draft target to round out your defence). Speaking of surgery, hello Sean Monahan (60.83%) how are you today? Better than you ever felt last year? I sure hope that’s true. He looked solid tonight which is a welcome sign.
Game Flow –

That mid-to late second period push was heavy. The most encouraging part was not giving up and protecting in the third period – they kept pressing and it worked.
Game Score – Andersson (3.33) at number 1 tonight. Johnny Gaudreau (2.66) is just a pleasure to watch. Creative and offensively gifted at such a high level – I sure would like to watch that for a long, long time. Lindholm (2.29) and his powerful shot scored a classic purple Gatorade goal tonight – it was fantastic. Oliver Kylington (-0.68) and Erik Gudbranson (-0.68) came at the bottom of the rankings in this one.
Shot Heatmap – 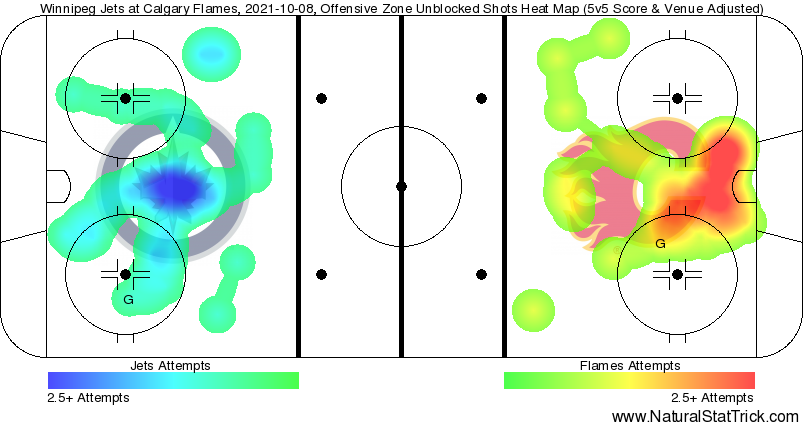 Flames were in the Jets kitchen heavily. It’s so satisfying to see the forwards push the slot for shot attempts – they did this more often than not this preseason. Connor Hellebuyck was hard to beat – Jets got better on defence this year, might get better defensively themselves after a few more weeks to mesh.
In The Crease – Markstrom wasn’t a busy goaler tonight. Stopped 18 of 19 shots at 5v5 with 1.08 expected goals against. He allowed no high danger goals – only saw on high danger chance at all – and was surprisingly beat by a low danger opportunity by Logan Stanley. That’s extremely uncommon of him and it’s not even a worry of mine. With defensive efforts like the one shown tonight the goalies could post some very good numbers.
Today’s Specials – That was the top power play unit we saw tonight – Tkachuk. Mangiapane won’t stay there long term… but he should. If Monahan plays at a high offensive level the problem of who plays on PP1 will seem irrelevant. It does look like the second unit will always have two D men on it. Sutter likes to have two defencemen on the ice when a power play ends so the second unit will see the second half of most power play opportunities. Most likely that’ll be Backlund – Dube – Mangiapane – Hanifin + either Kylington or Valimaki. If the leads important expect Tanev.
Player Spotlight – Elias Lindholm – He’s got the best wrist shot on the Flames, yes even better than Johnny’s. If you feed this guy the puck he can score 30 goals, easily. Ever since he became a Flame his game has just grown more complete. He’s signed for three more years at 4.85M – what a steal of a contract.
Flashalytic’s 3 Stars –
1) Rasmus Andersson
2) Noah Hanifin
3) Johnny Gaudreau
The Flames season opener will be on Hockey Night in Canada Sat., Oct. 16 at 8 p.m. MT against the bad guys from up the road. The Battle of Alberta to start the season – all covered right here at FlamesNation!
(Stats compiled from Naturalstattrick.com // Game Score from Hockeystatcards.com) – Any hockey questions about what you read here? Leave a comment below or find me on twitter @Flash_33
Uncategorized
Recent articles from Shane Stevenson